We know Newcastle well. Or at least we thought we did.

Our recent trip up the road to Australia’s 7th biggest city showed me that I didn’t really know much beyond the riverfront walk, Nobby’s Beach and a lot of pubs.

Newie (as it’s called by the locals) was the place to go out when we were younger. It was a 90 minute train journey away from where we grew up so it was always saved for special occasions and memorable moments.

But, a city is more than it’s nightlife. We had dipped into Newcastle a few times over the past couple of years, but I just couldn’t get a strong enough connection to it. I felt it was missing something, but I didn’t know what. 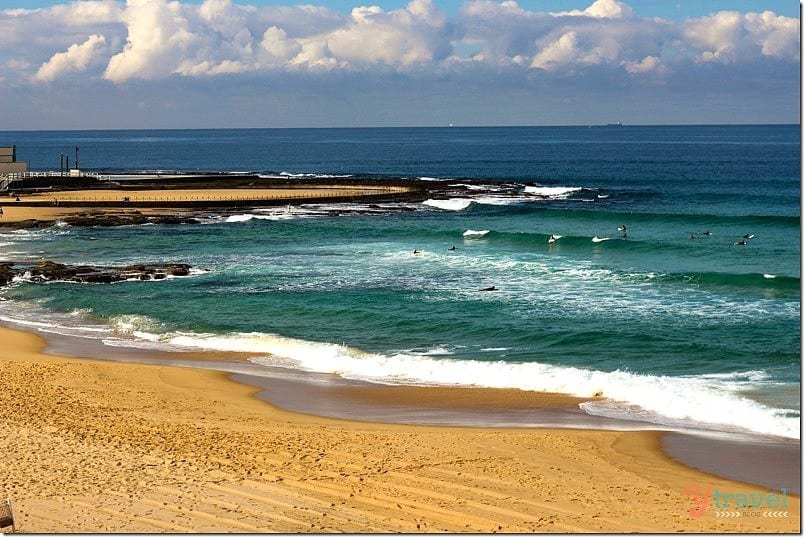 Newcastle has had quite the resurgence over the past few years.

It’s implemented a few creative programs to bring back the culture and arts to the city. Artists have been invited on special programs to work and showcase their pieces in the city centre and there has been a huge growth in the cafe and restaurant scene.

It’s becoming quite the coffee and foodie haven.

It’s not just about pubs and industry anymore. Newcastle is a city of rich history, quirky culture and amazing scenery. It’s also a city of superlatives and a deepening soul.

Here are a few interesting facts we discovered about Newcastle: 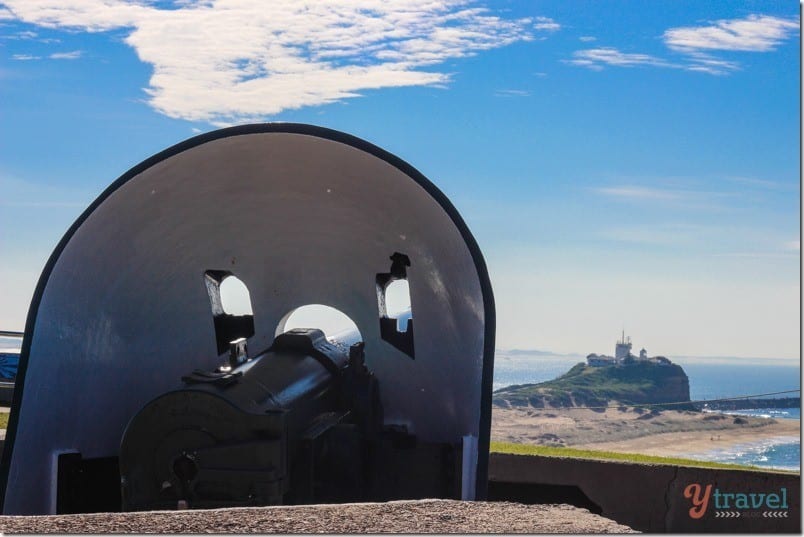 I was pleasantly surprised by Fort Scratchley. I’m embarrassed to say after all my years of coming to Newcastle, I did not know of its existence! No pubs in it I guess. 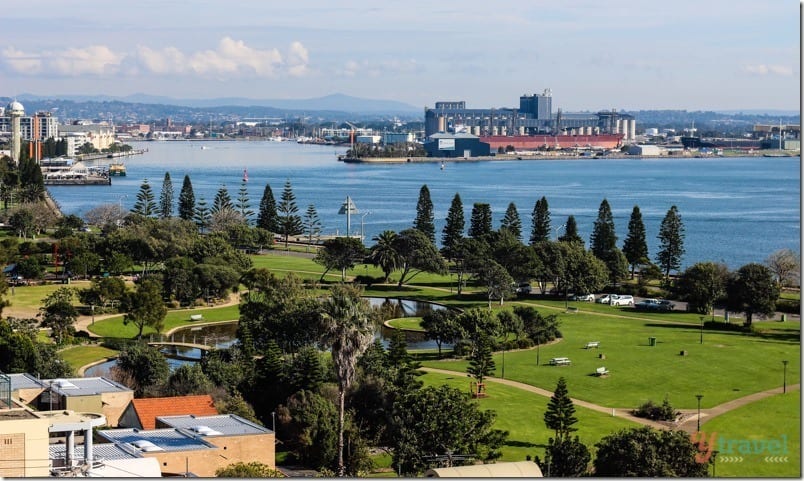 Apart from some of the best views in Newcastle looking out to the ocean for whales, across the harbour to Stockton beach, and back over to a pretty cityscape, Fort Scratchley has immense value in its history.

This fort was well positioned to protect the city of Newcastle with guns on top of the fort and in the tunnels below that all aim upon the ocean, harbour entrance, and river.

It was unlikely an enemy vessel would make it through the harbour into the city. During WWII the Fort fired upon a Japanese submarine that bombarded Newcastle with shells.

The six inch guns are still used today during special ceremonies such as Anzac and Australia Day services. And yes, they fire blanks. (I did check).

The girls really loved running around the tunnels and I highly recommend you pay the fee to see this part of the Fort. I don’t think you would appreciate the Fort as much without doing it. 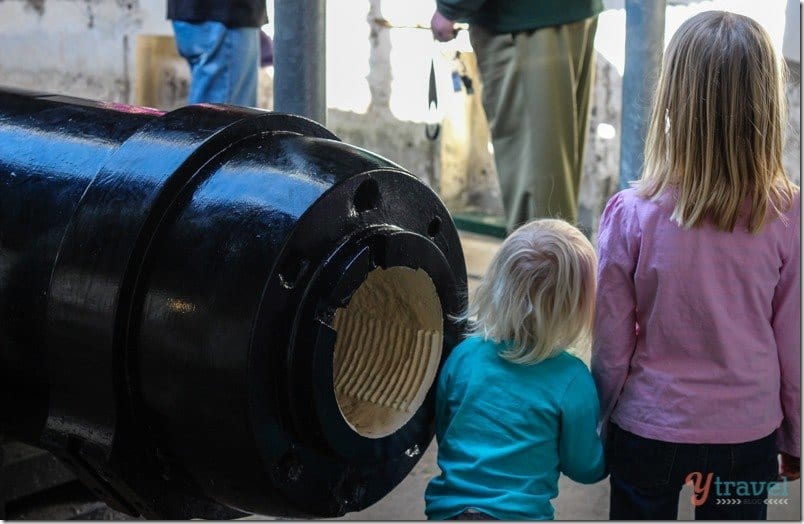 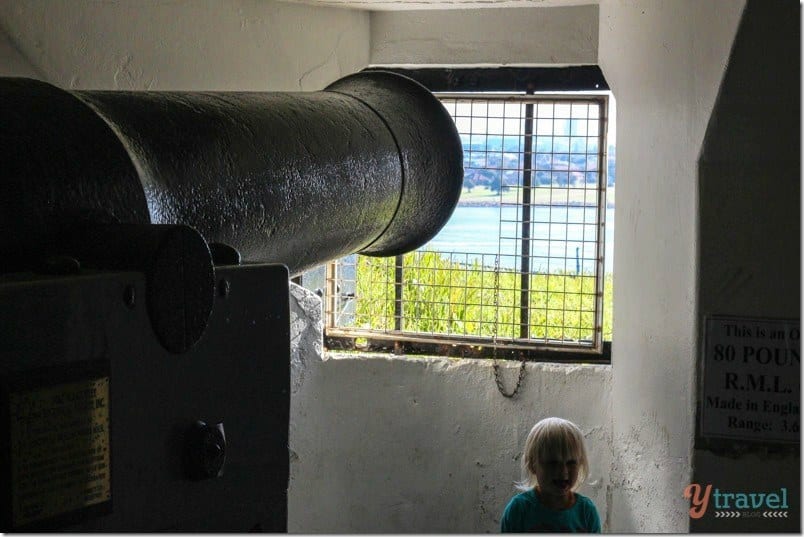 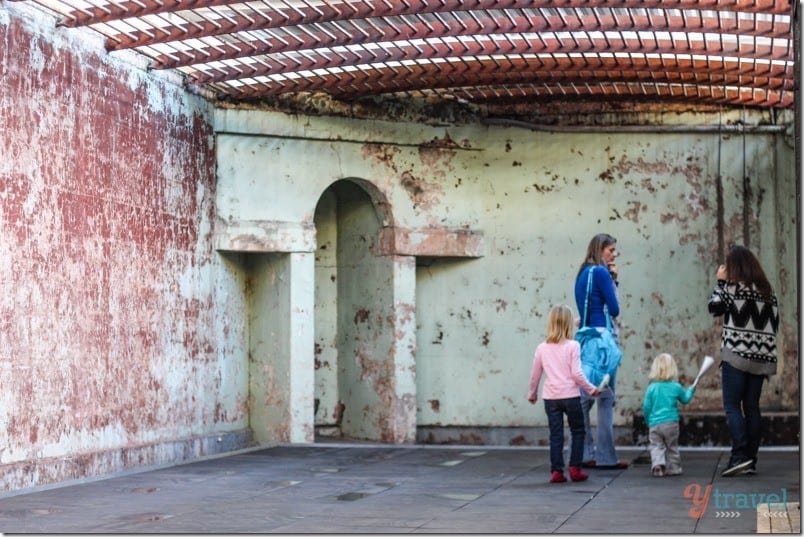 The Lock-Up was Newcastle’s Police Station from 1861 until its closure in 1982.

The heritage listed cells, once held offenders who were drunk and disorderly, insulting police officers, attempted suicide, swearing in public or who were involved in historical events such as the Coal Strike of 1909, the Clara Street Eviction riots during the Great Depression and the 1979 Star Hotel riot (which is sung about in the Cold Chisel song, Star Hotel).

The building now includes six cells – both men’s and women’s – a very rare example of a padded cell, and two exercise yards separated for men and women.

There’s also the foyer, which was also the charge room—the place where the riff raff were measured, photographed and charged. 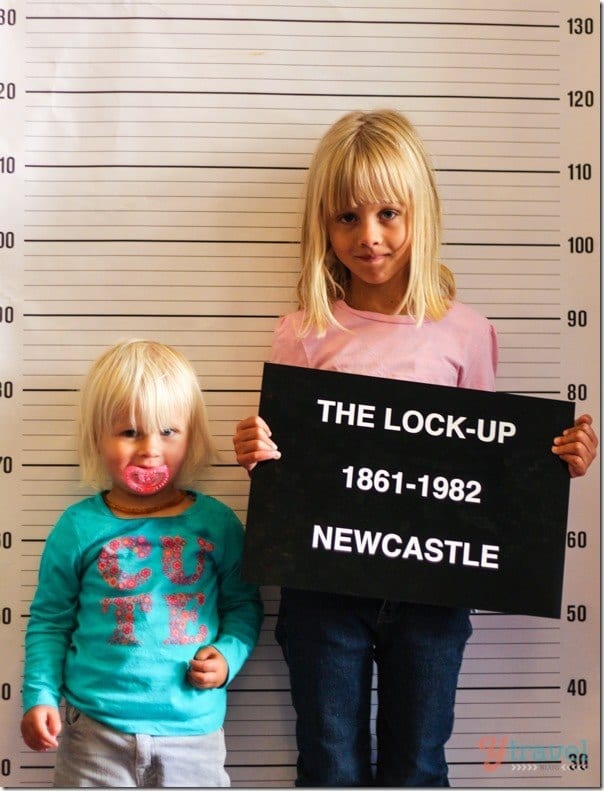 It was only a matter of time. That’s what you get for not wanting to sleep!

For quirky culture, boutique shopping and seriously good cafes Darby Street is the place to wander of an afternoon. The only stressful thing is trying to choose which of the 20 cafes to chillax in. We recommend Frankie’s or Zinc Cafe. 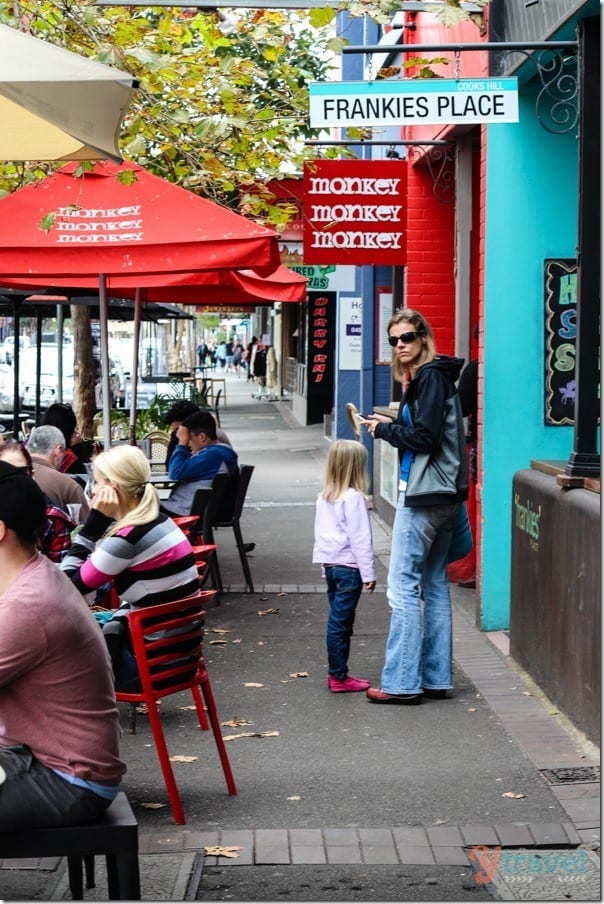 I was really pleased to see how a once drab and boring city centre is now offering a wide variety of eclectic and funky cafes, restaurants, and shops.

It’s all thanks to the Renew Newcastle project. Renew Newcastle was founded to help solve the problem of Newcastle’s empty CBD. It aims to find artists, cultural projects and community groups to use and maintain these buildings until they become commercially viable or are redeveloped.

I only wish we had more time to explore. Renew Newcastle is finding uses that are often so interesting they are becoming tourist attractions 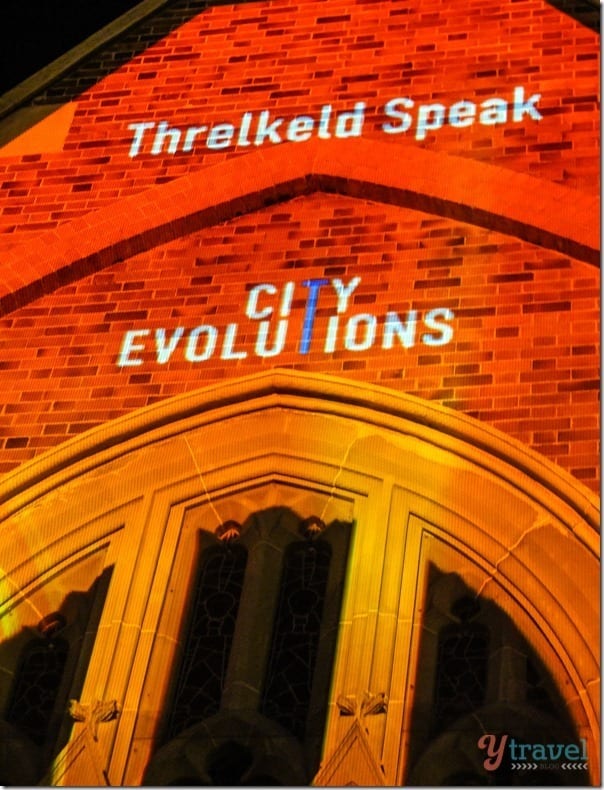 We had the pleasure of taking a evening tour with Louise from Newcastle Walking Tours as she explains the various light displays and the stories each was depicting.

Newcastle has a rich and vibrant history and the city has decided to tell that with different light shows on the historic buildings of the city. 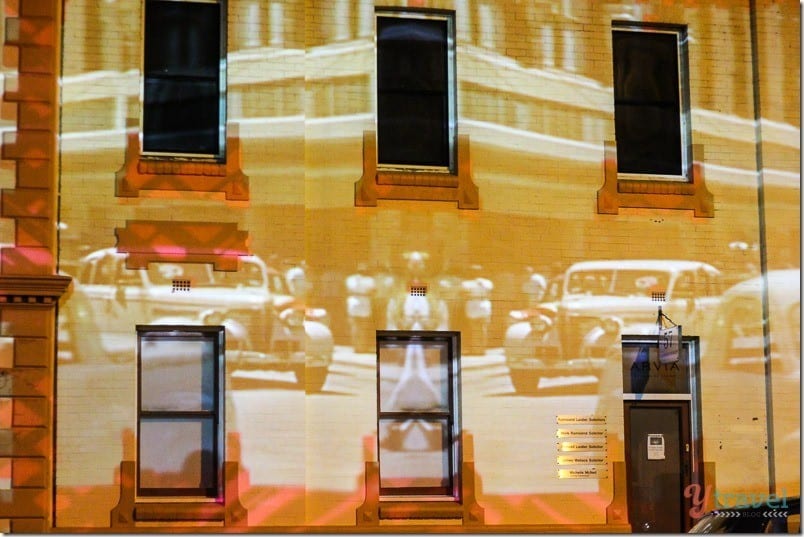 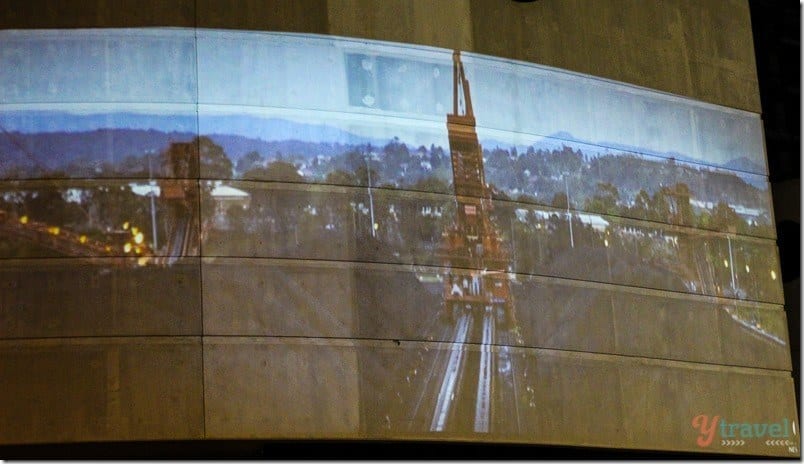 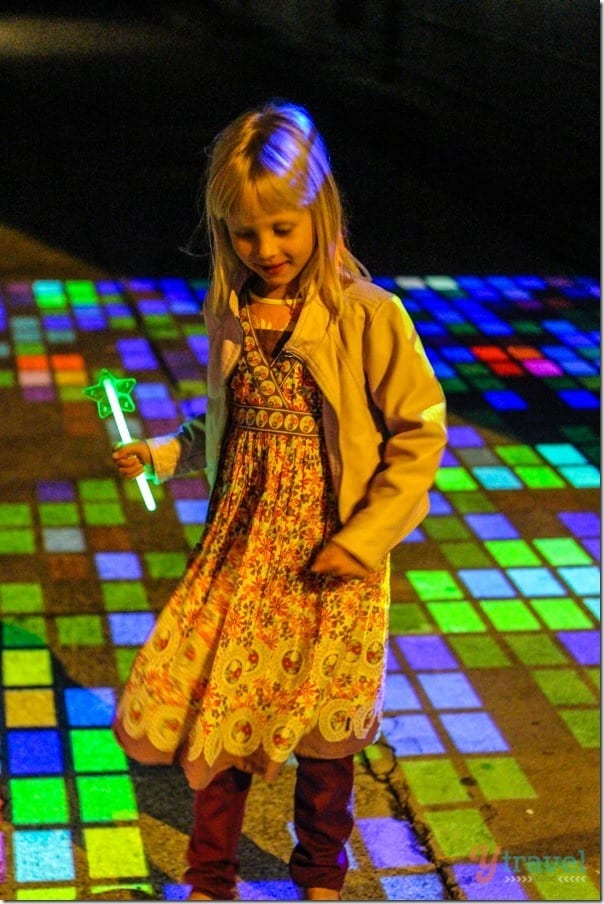 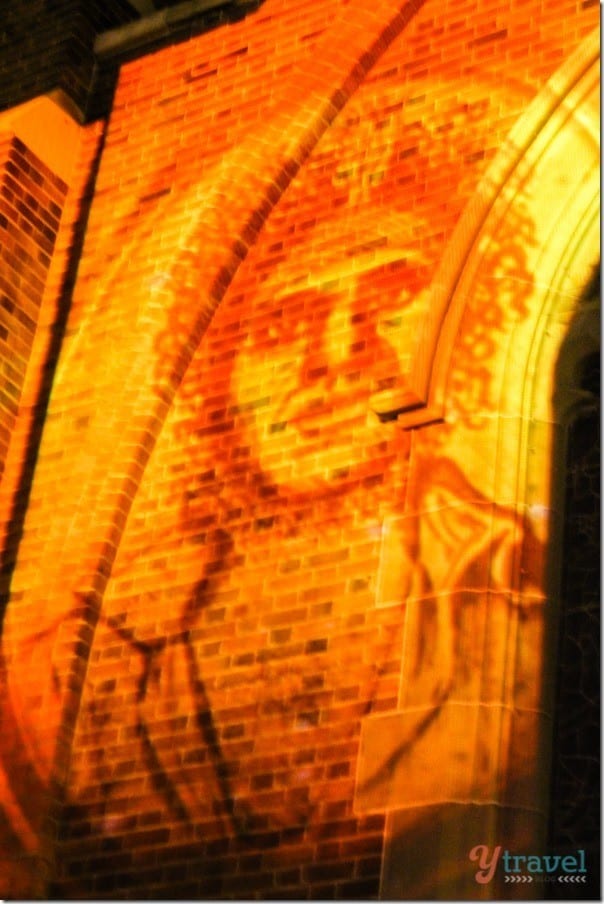 Evolution intends to be a permanent nightly affair.

An app has been created to help guide you through the experience. I really enjoyed doing the tour; if it was just left to myself to do it, I would probably wander past with a fleeting, “Oh doesn’t that look cool” comment.

Instead I was able to learn about Reverend Threlkeld who, probably the first person in the history of our relations with Aboriginal people, decided that instead of forcing them to conform to our ways, he would learn their language in order to better communicate and understand.

We walked away with a better understanding of the stories that lie behind Newcastle’s rich history. Kalyra had a ball jumping around on the interactive disco floor and Louise was so patient and friendly with her. 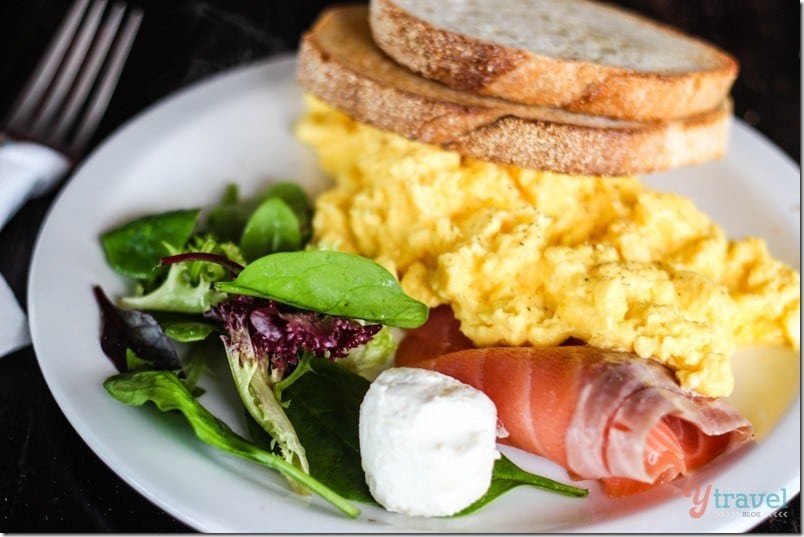 And the food. Well I was impressed.

From Spanish tapas, to fancy French cuisine, and German prosting fun, Newcastle is bringing on the culture.

We’ve written a post on places to eat in Newcastle, so we won’t go into too much detail now. But check out I Love Oma cafe (German), Sprocket Roasters, and Estabar.

Every Sunday the city holds a Newcastle City and Farmer’s Market out at the Entertainment Centre. It’s a great place to pick up fresh and cheap produce.

There are a few stalls that sell other traditional market wares like wind chimes, crafts, and hand-woven bags. 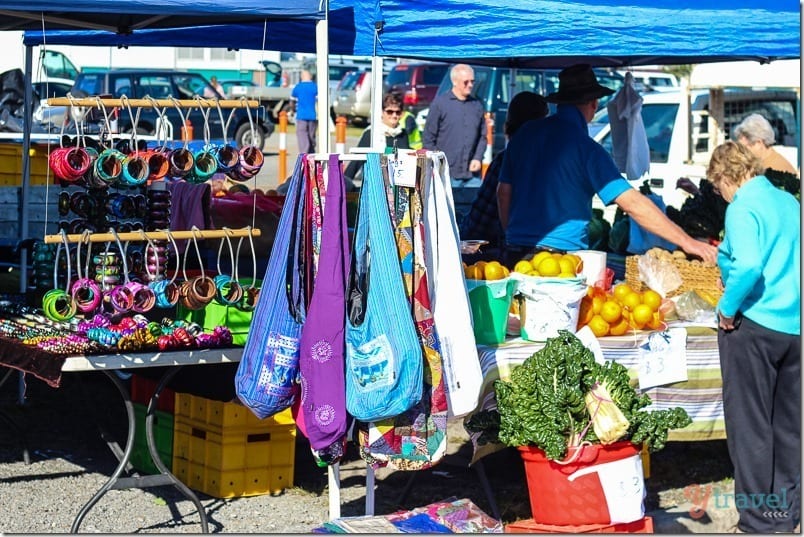 Newcastle is a University town which brings a lot of culture, innovation and arts unto itself. We were impressed to hear of the Artists in Residents program at the Lock Up Centre.

It’s inside the old city prison, and artists can now take up residence in an apartment on the first floor for up to three weeks at a time, in order to research and study for their latest masterpieces.

Inside the historic building is also curated exhibitions by Lock-Up staff and local artists. 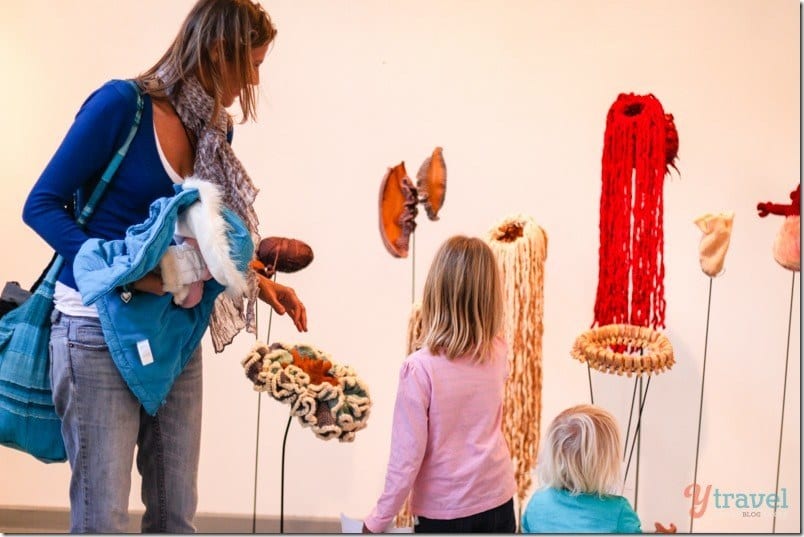 Newcastle Art Gallery holds the second largest collection of art in NSW and there are plenty of smaller private art galleries to peruse.

The coastline beckons surfers, day trippers, health nuts and those wishing to sit in peaceful silence. We stood and watched the surf for some time – beautiful breaks, with little competition for them.

It’s on our list to come back and do. 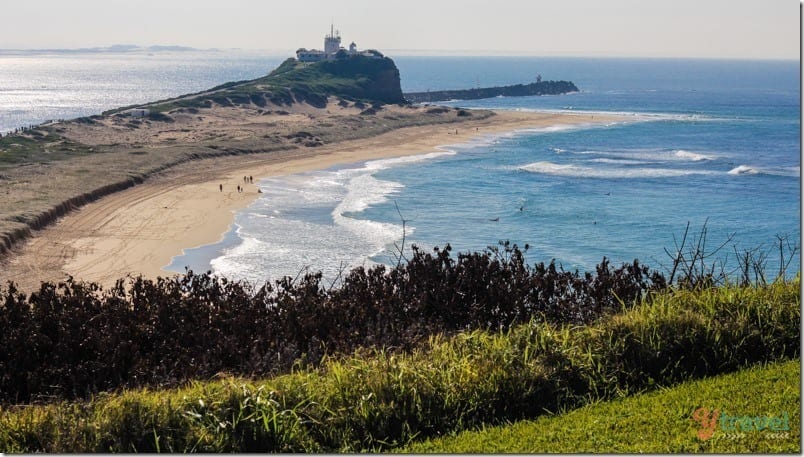 On our visit to Fort Scratchely, we learned that the lighthouse on the top of the hill at the northern end of Nobby’s Beach was once an island.

A break wall was built to protect the harbour and so created one of Newcastle’s most popular beaches and, as it is a south facing beach, helped to create some of Newcastle’s best surfing breaks.

Not only does Newcastle have an endless pick of oceans to enjoy, the Hunter River also meanders through. Newcastle is a port town so you can sit and watch freighters, small fishing vessels or cruise boats sail in and out.

There are plenty of picnic areas or restaurants to enjoy the view.

To the North, just a short ferry ride from Newcastle lies the Stockton sand dunes, the largest moving coastal sand mass in the southern hemisphere.

To the west are the vineyards of the Hunter Valley, an extremely popular and well-known Australian winery area.

Then there was the Hunter Wetlands Centre. I’d never heard of it, which is a shame because it has more bird species than Kakadu. Kakadu!!!

Can you believe you have never heard of it either?

It is a very peaceful and special place that can be appreciated via its walking trails or by Segway. 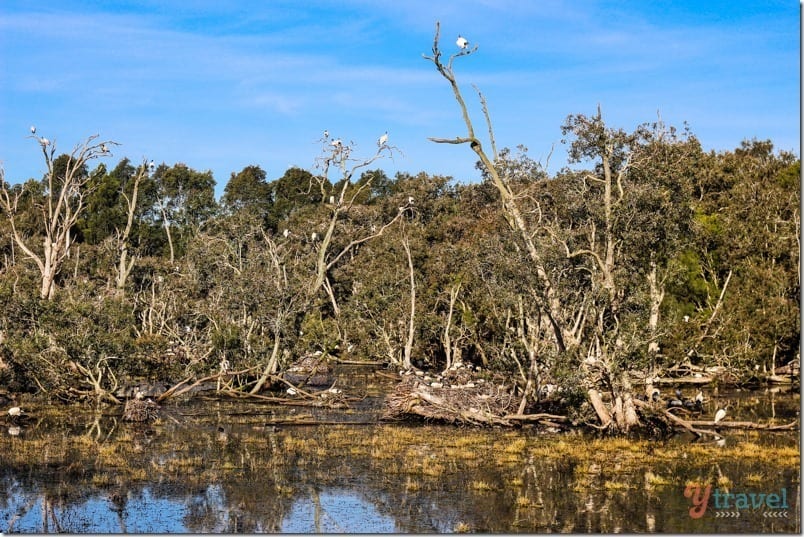 I thoroughly enjoyed my weekend in Newcastle.

I thought I knew it so well and it ended up being an experience where I felt as if I was exploring a new city for the first time. Newcastle offers so much more than fun bars and dance floors.

There is richness, as well as beauty, and a relaxed vibe.

I think it’s a place you could use a base for several weeks to have a relaxing and enjoyable travel experience. Slow travel at its best. I understand why Lonely Planet listed in it’s Top 10 Best in the world List for 2011.

I am excited to see where Newcastle goes because I think it is only beginning in its transformation and will have an incredible amount to offer travellers.

Where to stay in Newcastle?

Newcastle does have quite the shortage of accommodation options, which is on their long-term plans to improve upon. 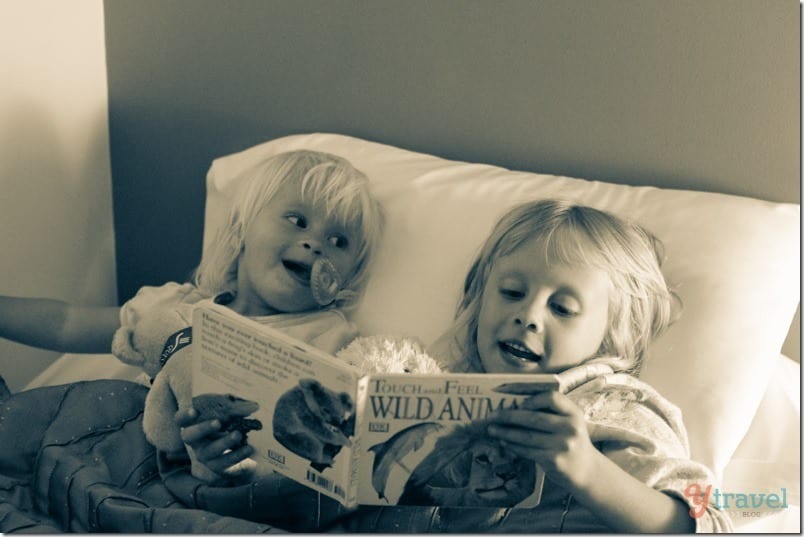 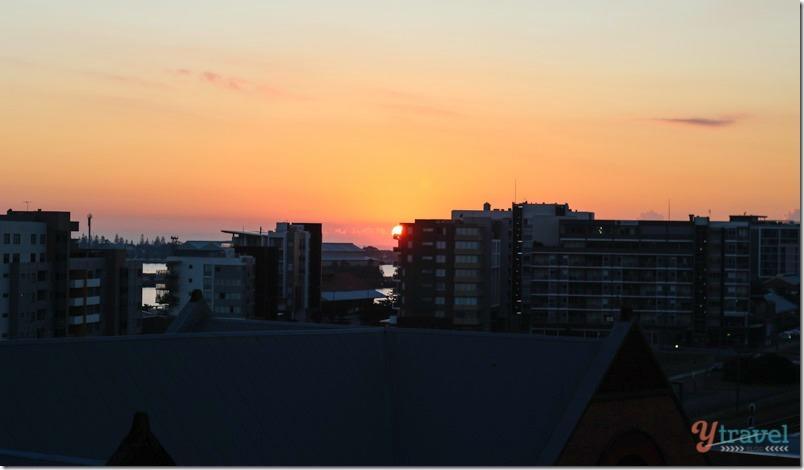 We stayed at the Quest serviced apartments. It was very comfortable, clean and centrally located. We love apartment stays and this one checked off everything on the list.

I immensely enjoyed watching a movie from the bed, which was like lying on a fluffy white cloud (a much different Newcastle night time experience from when I was 21).

Have you enjoyed a visit to Newcastle before?
What did you enjoy most?

18 thoughts on “Things to do in Newcastle NSW with kids”