What is Australia best known for? What excites me about travelling in Australia and sharing it with others?

In my mind when I think of Australia and places to suggest to others to explore, I think of our natural beauty and stunning landscapes. I think of the Outback, of our reefs, our beaches and rock formations.

Sure Australia has two world class cities in Sydney and Melbourne, a strong sporting culture and wine industry, a multicultural society and ever-growing foodie scene, but what had the most impact on me after road tripping around Australia for 18 months is how strikingly beautiful my country is.

I don’t know if there’s an official definition of a “natural wonder” but these are the natural places I found “wondrous” and moved me physically and emotionally.

This is not an official list of natural wonders of Australia. Just my personal list of places I have visited. As you probably know we’re still yet to visit many areas of Australia, including South Australia. 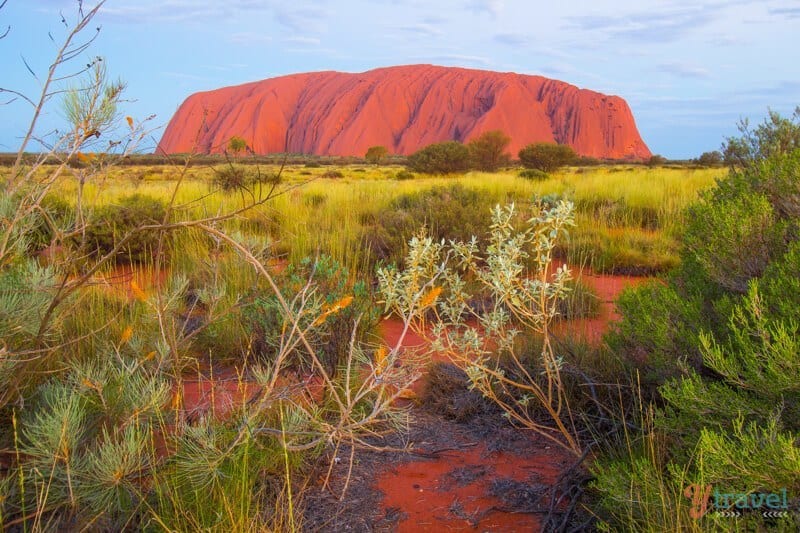 If there’s one area that Australia differentiates itself from other destinations it’s the Outback. And standing in the heart of the outback is one seriously big sandstone rock. Formerly Ayers Rock and now Uluru (the Aboriginal and official name) it’s sacred to indigenous Australians and believed to be about 700 million years old.

Uluru stands 348 metres above ground and is taller than The Eiffel Tower and 2.5 times the height of Sydney Harbour Bridge. It’s 3.6kms long, 1.9kms wide, with a circumference of 9.4kms.

No matter how many times you’ve seen it on postcards, nothing prepares you for the first time you see it appear on the outback horizon. And how it changes colour at sunrise and sunset is a truly spectacular sight.

Related article – 9 ways to experience the magic of Australia 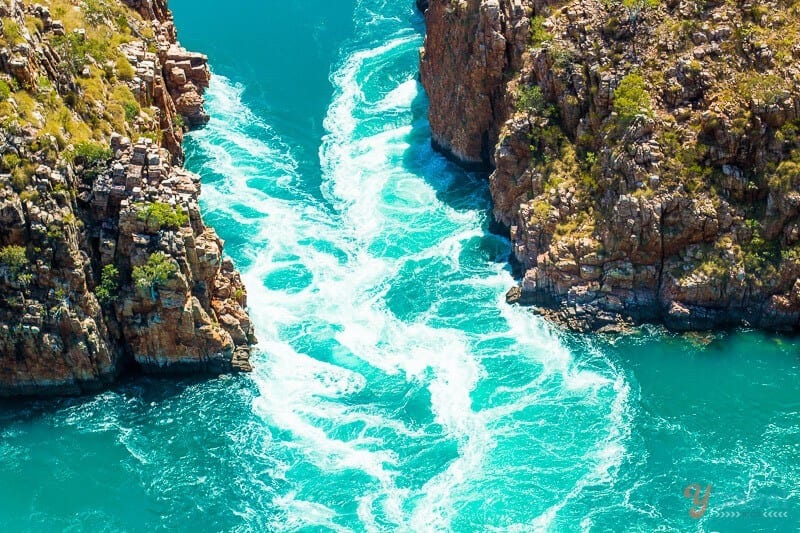 The day starts as you depart on a scenic flight over the coastline of Broome, fly over the Buccaneer Archipelago before getting a birds eye view of the Horizontal Falls and then landing in Talbot Bay in the Kimberley Region of Western Australia.

The Horizontal Falls are a natural phenomena, created by two narrow openings between two escarpments. The tides in this region are some of the biggest in the world, reaching up to 12 metres. Taking on the falls in a jet boat is a thrill I won’t soon forget! 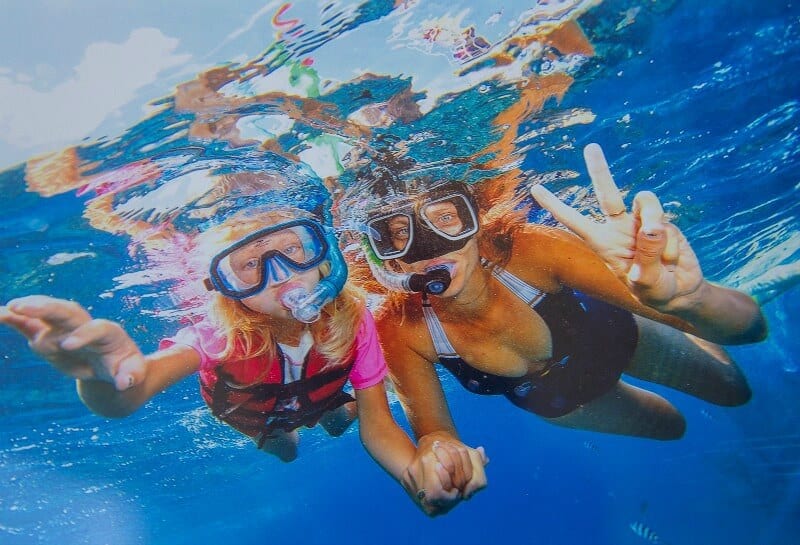 The only living thing on Earth visible from space and one of the seven natural wonders of the world.  400 different types of coral and 1,500 species of tropical fish inhabit the reef system.

Stretching 2,300km long – the same length as from Vancouver to the Mexican border – the GBR consists of 900 islands and 2,900 individual reefs making it the world’s largest coral reef and the largest living structure on the planet, so amazing it can be seen from outer space. It’s not just a wonder of Australia but a true wonder of the world.

Dive, snorkel, sail, admire it from the air. The main gateway being from Cairns but there are many access points up and down the Queensland coast.

Related article – How to visit the Great Barrier Reef 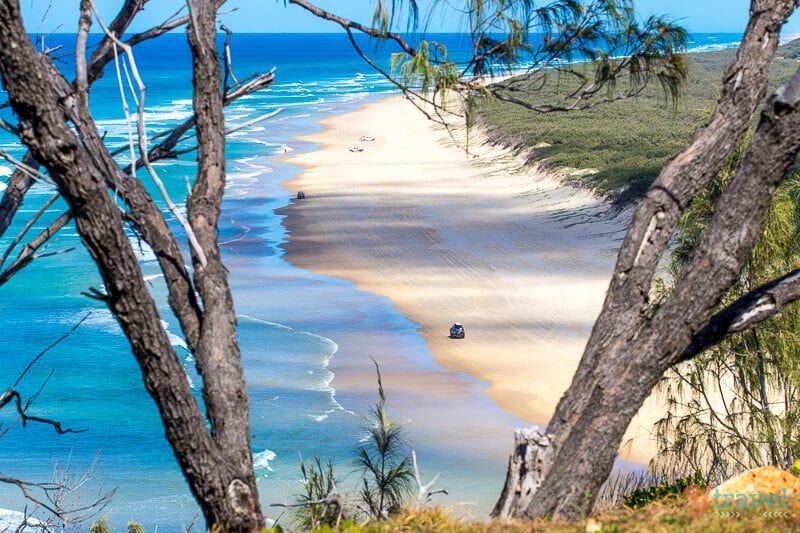 Fraser is the largest sand island in the world dumped over 800,000 years ago from places as far as Antarctica when it was still joined with Australia. It stretches 123 km long and 23 km wide and is a World Heritage Site because it’s constantly moving and evolving.

Fraser Island is the only place in the world where tall rainforests are found growing on sand dunes at elevations of over 200 metres. It’s a special place and what I like to call “nature’s perfect island”.

It’s a 4wdrivers mecca and for those that love camping, beach fishing, the rainforest, inland lakes (there are 100 freshwater lakes) and spotting migrating humpback whales off shore. 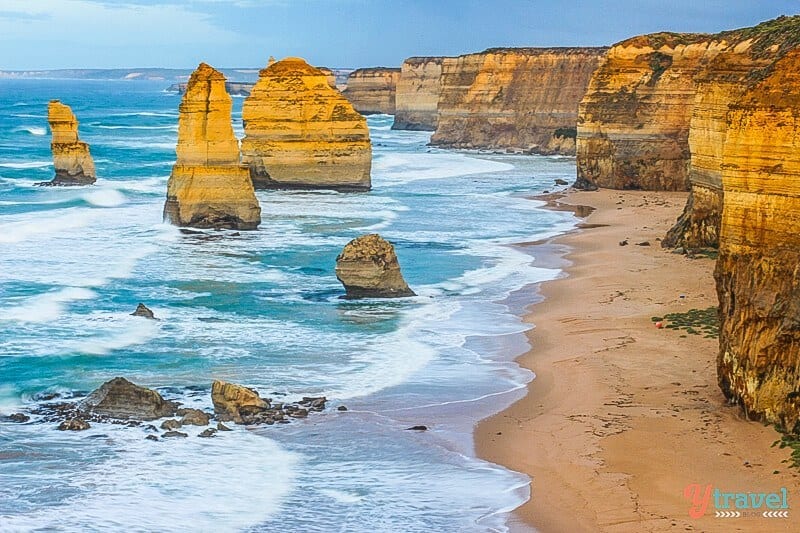 The twelve apostles are the star of the show along the famous Great Ocean Road. These massive limestone structures tower 45 metres above the ocean and were formed some 20 million years ago as the sea gradually eroded the soft limestone cliffs.

There are only eight remaining (the rest have fallen) and forming the backdrop are these magnificent cliffs up to 70 metres high. The best time to photograph and see them is at sunrise – you’ll beat the tour buses and have the place almost to yourself – and at sunset.

You should also walk the boardwalks around the cliff tops which provide various viewing platforms and take the Gibson Steps down onto the beach for a close up perspective. 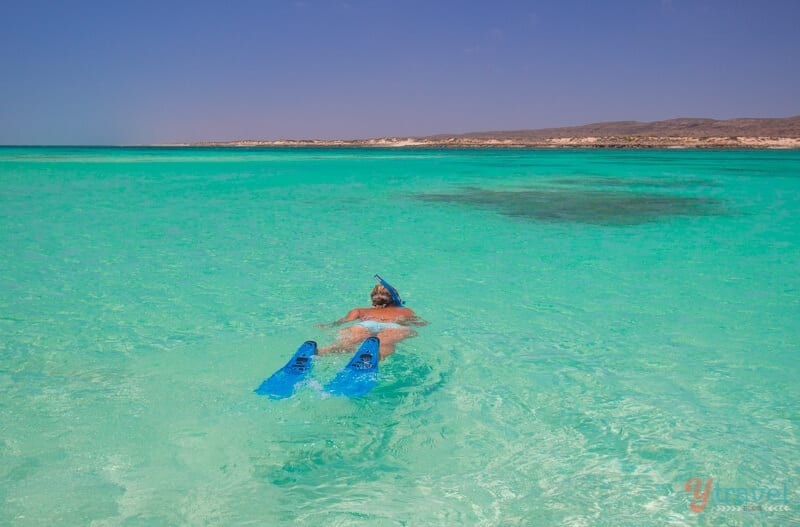 Before starting our journey around Australia, many other Aussies and travelers told us that Ningaloo Reef rivals the Great Barrier Reef.

The awesome thing about Ningaloo is the easy access, you can just walk in off the beach and be snorkeling 10 metres from shore. The snorkeling and diving is world class, and it’s here that you can swim with the whale sharks. And some of the most amazing beaches we’ve seen are located along this coast; Sandy Bay and Turquoise Bay.

Choose from the largest range of accommodation in Australia including hotels, apartments and guesthouses with our partner Booking.com. Get free cancellation on most rooms, and in most cases you only pay when you stay: 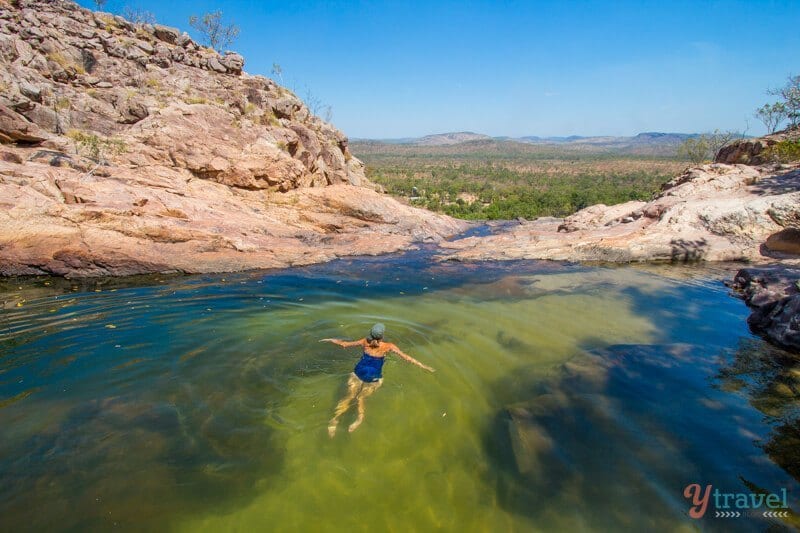 After spending five days exploring Kakadu, I can’t believe some people call it Kaka-Don’t. Me, I put Kakadu up there in the top three National Parks we visited during our trip around Australia, and we visited plenty of parks.

One of the few World Heritage sites to be listed for both its cultural and natural features, Kakadu is renowned for its rich Aboriginal history and biodiversity. And at 19,000 square kilometres, it is almost half the size of Switzerland! 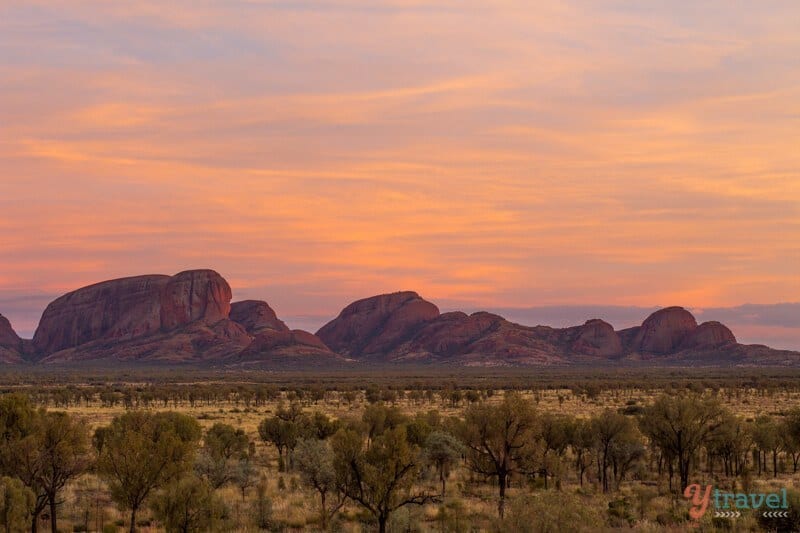 Approximately 50 kilometres down the road from Uluru, Kata Tjuta (formerly the Olgas) are said to originate from a similar time.

The 36 domes that make up Kata Tjuta are spread over an area of more than 20 kilometres, making it bigger than Uluru. The tallest dome rises 546 metres above the plain.

Kata Tjuta is a Pitjantjatjara Aboriginal tribe word meaning ‘many heads’. Equally spectacular at sunrise and sunset. Do the Walpa Gorge Walk and the Valley of the Winds Walk. 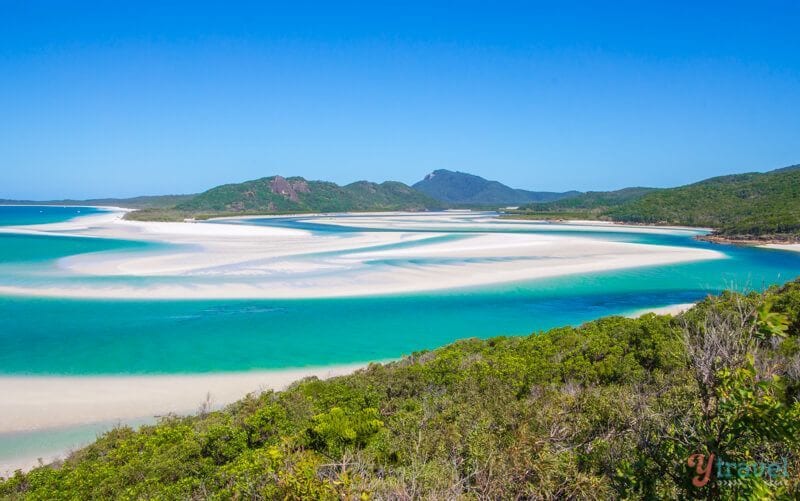 And we’re not alone in singing its praises, it consistently ranks in the best beaches in the world lists on Trip Advisor, and hey, it’s where Oprah Winfrey chose to have her beachside BBQ on her tour down under!

The isolation, the pure white-soft-silica-sand and the swirling patterns of Hill Inlet are like nothing I have ever seen. When you walk on Whitehaven you’re setting foot on a real slice of Aussie paradise! 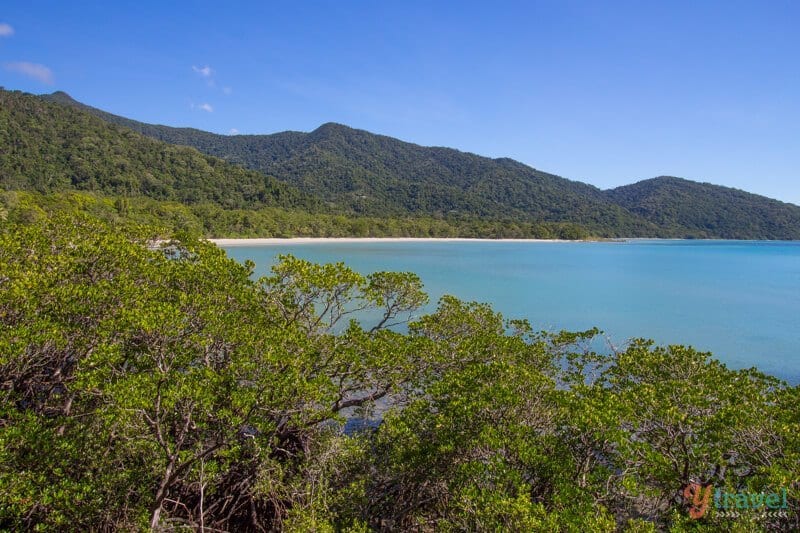 How can something so old, be so beautiful. Estimated to be 180 million years old the Daintree Rainforest pre-dates even the Amazon and is the largest continuous area of rainforest on the Australian continent containing an array of flora and fauna and about 430 species of birds.

We spent a few days camping at Cape Trib Camping and a few nights at the Daintree Riverview Lodge. Highlights included a visit to the Daintree Discovery Centre and my favourite spot, Cape Tribulation. 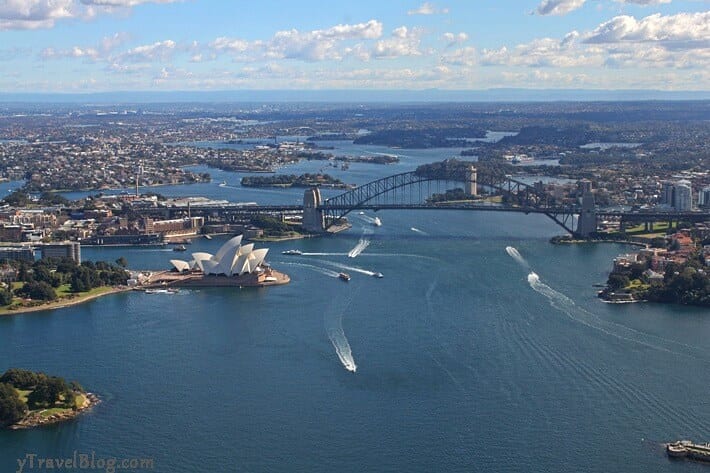 Sydney is undoubtedly one of the most beautiful cities in the world, and a big reason for that is its stunning harbour side location. Sure it has the man-made icons like the Harbour Bridge and the Opera House, but it’s the natural beauty of the harbour that always leaves a lasting impression on me.

With more than 240 kilometres of shoreline and meandering waterways, on a warm sunny day it becomes one big aquatic playground. The best way to experience Sydney Harbour is from a ferry (circular Quay to Manly), on a cruise, by going sailing, by kayak, or even from the air.

Related article – things to do in Sydney 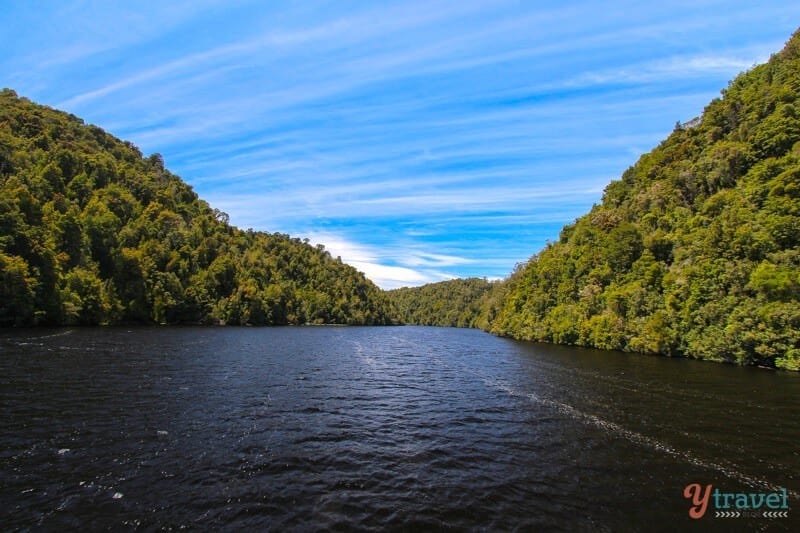 It was a day to remember. We cruised gently along the river where the lush and ancient rainforest was reflected in the mirror calm waters as we learned of the sought after Huon Pine tree for its boat building qualities.

Related article – a day to remember on the Gordon River

Plan Your Trip in Australia

We’ve been traveling consistently for 17 years and have come to rely on a few trusted websites that save us money and time when booking accommodation, flights and car rental. Below are our preferred partners:

What is your favourite natural wonder of Australia? How many on this list have you seen? What would you add?

20 thoughts on “12 Natural Wonders of Australia”