We’ve experienced Sydney in so many ways: walking across its bridges and around the foreshore, going on harbour cruises, climbing the Sydney Harbour Bridge, taking ferry rides, and kayaking middle harbour.

But never before from the air. 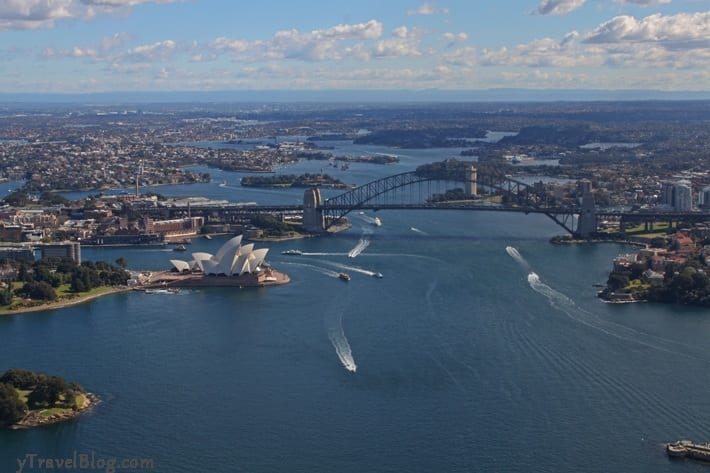 We’ve seen the photos and the video footage and every time been blown away with just how beautiful Sydney Harbour is. I never really ever considered that I would one day have the opportunity to fly by the Sydney Harbour Bridge.

I was nervous when the opportunity came for us to experience Sydney by air. 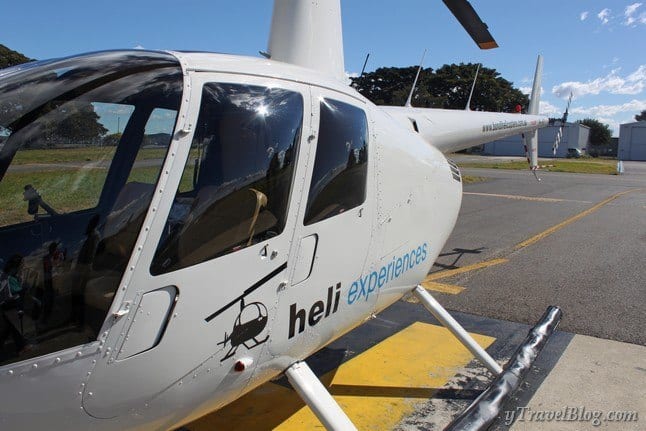 Helicopter flights have always been on my list of things I‘d never do. I don’t know why. I think because of out of the thousands that fly every day I had remembered the few that crash every year.

Funny how our mind works and as our pilot, Guy, reassured me during pre-departure checks that helicopter flying is safer than being on the ground – much like flying in a plane.

I had a feeling that being up in a helicopter would be like that of our hot air balloon ride. Beforehand I was nervous and scared, but as soon as I floated up I felt strangely peaceful, safe and relaxed.

Guy warned me that during take-off he would skim along the ground nose pointing down. I was sitting up the front and thought I would freak out, but as soon as the chopper went up and we dipped I felt like I was on a fun roller coaster ride.

I felt that strange calm envelope me and I never once thought about it possibly being dangerous again, even when the chopper dipped and shook in the breeze.

Coasting above Sydney Harbour was surreal and one of the best experiences I have had in Sydney. 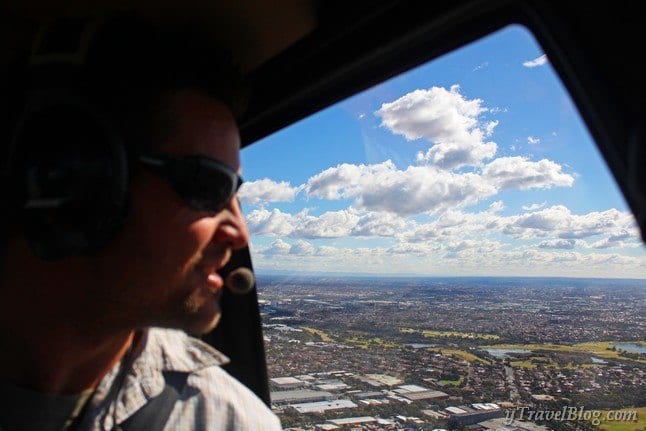 While I was up there gazing in wonder at the beauty of Sydney, a beauty I thought I had already seen a million times over, I thought of the Sydney Bridge Climb in comparison to this flight.

I would recommend the helicopter flight over the climb as a far more enjoyable experience, with views that couldn’t be topped any other way. Even though it was much shorter at only 20 mins it had a much more impactful wow factor.

I felt as if we were in a giant bubble floating over the most secret wondrous place on earth.

I never realized the water was so crystal clear and blue.

We ran along close to the cliff faces of Dover Heights and Vaucluse, around Watson’s and Rose Bay, over Sydney Harbour islands that looked like they belonged way out in the exotic Pacific Islands area.

And then came the highlight, we dipped and turned over the Sydney Opera House and past the Sydney Harbour Bridge, two of the world’s most iconic structures. 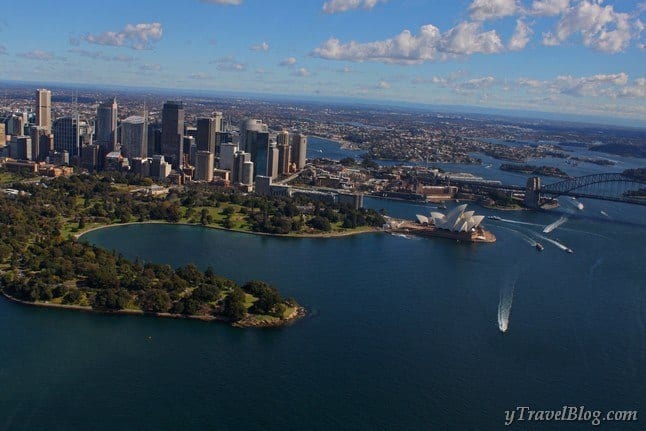 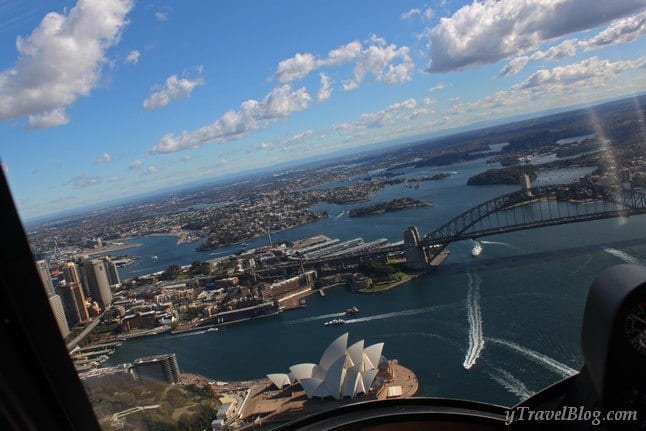 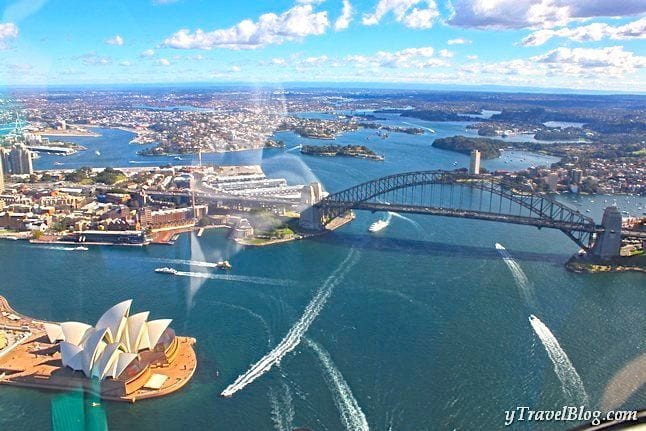 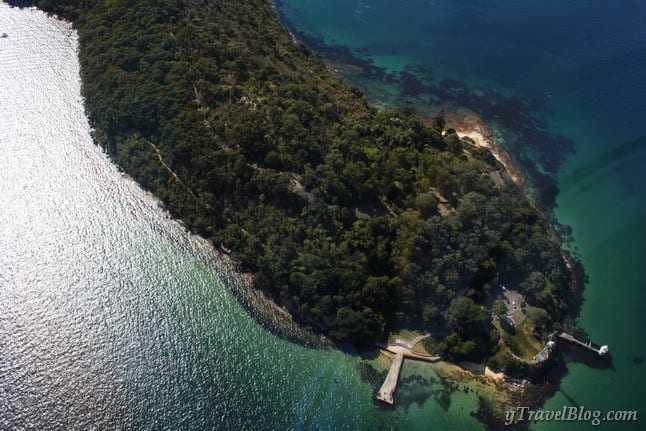 I can now without a doubt say that Sydney Harbour is the most beautiful in the world and Sydney would be a city that has to sit very high up as one of the greatest, for stunning factor at least.

Our flight was over so quickly. Before we knew it we were bumping with the wind over the Sydney Cricket Ground, Australia’s iconic sports field, and back to Mascot Airport.

I would happily ride in a helicopter again. 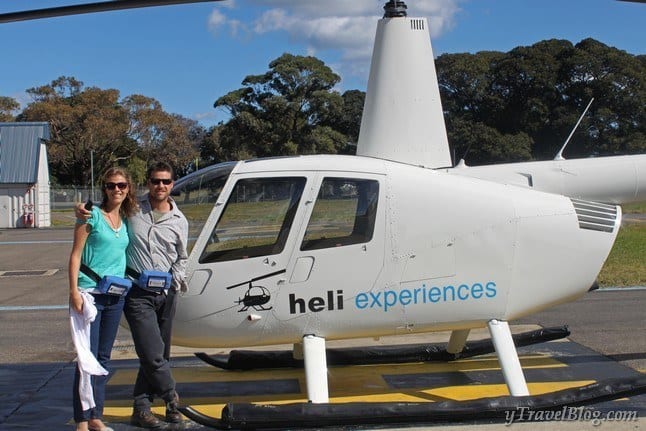 We were on the helicopter flight with RedBalloon, a site that is dedicated to gifting those you love with special experiences like learning to fly, or sunrise hot air balloon rides.

After announcing that Craig and I were bringing back monthly date nights a few weeks ago the opportunity to experience something with RedBalloon came up co-incidentally. With cheekiness, I claimed it as the first date I was responsible for organizing.

With Father’s Day coming up it was also the perfect Father’s Day present for Craig. Aren’t I just so romantic and clever??

The date did not end with the helicopter flight.

Part of the RedBalloon experience was to follow the flight with lunch at one of Bondi Beach’s most famous restaurants: Icebergs.

Now you may think you need to have a small loan to eat here, and if you want to eat in the top restaurant you might. You certainly need an inflated ego.

Downstairs, however is the bistro, where you will find really great prices with the same view as upstairs, but with friendly service instead. (Trust me, we were treated appallingly by the receptionist staff upstairs despite the fact that we “arrived” by “helicopter!”)

It was a beautiful warm Sydney winter’s day and our views out to Bondi were spectacular.

We had a lovely lunch of mussels, barramundi and Thai green curry washed down with wine.

I could not have organized a better date and from now on should be referred to as the whale whisperer.

Half way through my riveting conversation with Craig a whale breached out of the water right in front of us. Craig wondered what had happened to shut me up mid-sentence. I don’t think I could speak much after that.

The whale continued breaching, back flipping and playing before us.

What an amazing day! 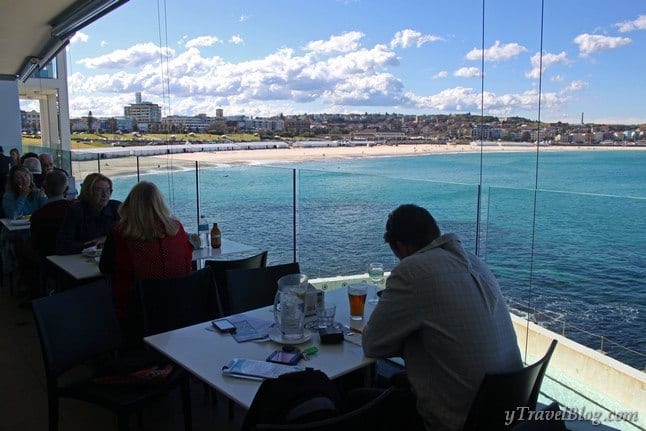 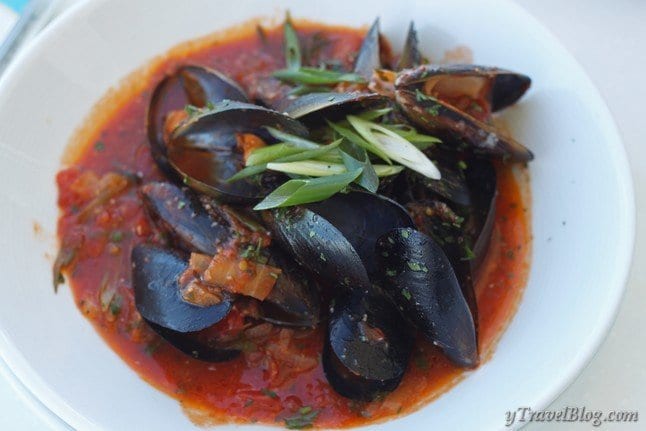 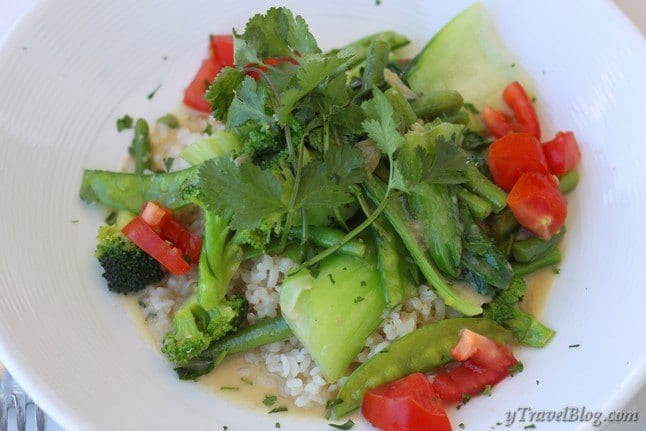 Our RedBalloon experience gave us not just a memorable time together, but an extraordinary insight into one of the world’s most beautiful cities.

Disclosure: Thanks to the team at Digital Parents Collective for inviting me to be a part of the Red Balloon Experience Program.