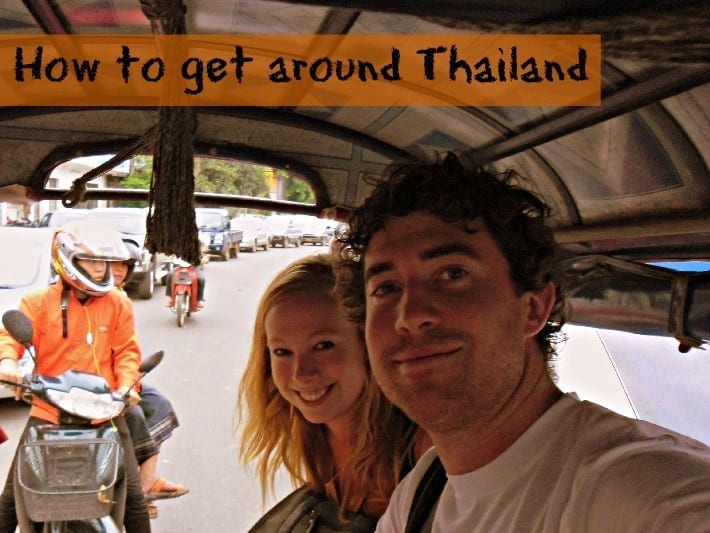 When my partner, Brent, and I first arrived in Thailand, it seemed like we were having nothing but bad luck when it came to taking tuk-tuks.

The drivers were constantly trying to charge us outrageous prices, leading us off on unwanted detours, and attempting to short-change us at the end of the ride.

Brent was filling one of our Thai co-workers in on the latest of our disaster stories, and the explanation for our woes seemed quite simple to her: “Because tuk-tuks are for tourists.”

Once she pointed this out, it seemed obvious: I never see Thai people riding around in tuk-tuks.

In my experience, most businesses in Thailand will unabashedly charge foreigners more than they charge locals. Therefore, chances are, if you’re traveling like a foreign tourist, you’re probably getting charged like one too. If you want to get around Thailand on a budget, you need to learn how to travel like a Thai person, not a tourist.

My current home base in a small town in Thailand has been the perfect place to take a closer look at how Thai people travel. There are no methods of transport here that are in place solely to cater to tourists, because there are no tourists.

So how are people getting around in my Thailand town?

Almost everyone owns a scooter. It’s therefore no surprise that, by far, the cheapest and easiest way to get around in any Thai city is to rent your own scooter.

For about $5 per day, a scooter rental gives you the freedom to go where you want, when you want. That said, not everyone is comfortable on a scooter, and traffic in some cities isn’t suited to newbies.

For those who don’t want to rent their own, scooter taxis are a good alternative. Scooter taxis are easily recognizable because the drivers typically wear a brightly coloured vest.

They are as quick as tuk-tuks, but in my experience, the drivers are less likely to overcharge. In fact, in smaller towns the drivers often charge a low flat rate to travel anywhere within the city.

These look like open pick-ups trucks with parallel benches in the back. They run within cities like a local bus, or on short routes between nearby cities.

There’s no official “stop” for songthaews, so you just stand by the side of the road and flag one down as it passes. They’re usually quite colourful, and full of people, making it easy to see them coming up the street. Hop inside the back, and then pay the driver when you get off.

Typically, you’ll be charged a set fare to ride to anywhere along the songthaew’s route.

If you’re carrying a lot of baggage, scooters and songthaews may not be practical options. In this case, I recommend meter taxis over tuk-tuks.

If you ask the driver to run the meter for your trip, you almost always end up paying less than if you try to haggle over a fare with a tuk-tuk driver.

It doesn’t take a lot of effort to learn how to say “hello”, “thank you”, and “how are you?” in Thai, but it makes a world of difference in how you’re treated. (“Sawadee,” “Kop Kuhn,” “Sabadee mai?”- respectively)

If you show your driver that you speak a little Thai, you will seem less like a wide-eyed tourist who just got off the plane, ready to fall for anything. Trying to make some taxi conversation helps the driver see you as a person, rather than just another dumb foreigner.

The use of a few polite phrases in Thai almost always leads to a better price and a shorter route. For example, once during a meter taxi ride, our driver suggested that he take us to the nearest metro stop, because the rush hour traffic was going to make the ride to our destination unusually expensive.

He could easily have kept driving and not warned us, leaving us to pay the inflated fare. I can’t be sure, but I think he gave us a break because he was charmed by our broken attempts at Thai. A little Thai also goes a long way towards getting a warmer reception and more assistance at bus and train stations.

I’ve had to get used to the fact that it’s very difficult to make plans around transport between cities and provinces in Thailand. It’s not always possible to find bus and train timetables online, let alone book a seat in advance. Trains and buses are frequently very late, slow, and crowded.

Buying a ticket doesn’t mean that you won’t end up squatting in the aisle because all of the seats are taken. Getting around in Thailand became a lot easier for me once I stopped worrying about when I was going to get to my destination.

The craziness of the transport system becomes more manageable when you view it as an adventure, rather than a hassle. There’s something strangely magical about a long, slow ride on the rickety Thai railway, with the windows open to combat the sweaty heat, listening to the vendors calling out for passengers to buy food as they walk up and down the aisles.

When you stop taking transport seriously, you can start to enjoy the journey and have some fun figuring out the best ways to get around Thailand.

BIO: Jessica has been working/volunteering her way through Europe and Asia with her partner, Brent, since September 2011. The projects are varied: from gardening at a retreat center in Germany to teaching ESL in Thailand. Check out Ways of Wanderers  for her latest stories and travel advice.

15 thoughts on “Tuk-Tuks are for Tourists: Secrets for Getting Around in Thailand”