The road in was windy and long up to the western edge of an Australia World Heritage area, Lamington National Park.

We drove through the beautiful sub-tropical rainforest, but by about the 73rd turn we were over it and hoped that our destination would be worth it.

But after our two-night stay at O’Reilly’s Rainforest Retreat a popular Gold Coast Hinterland accommodation, I’d easily do the scenic drive through the Lamington National Park again, multiple times! 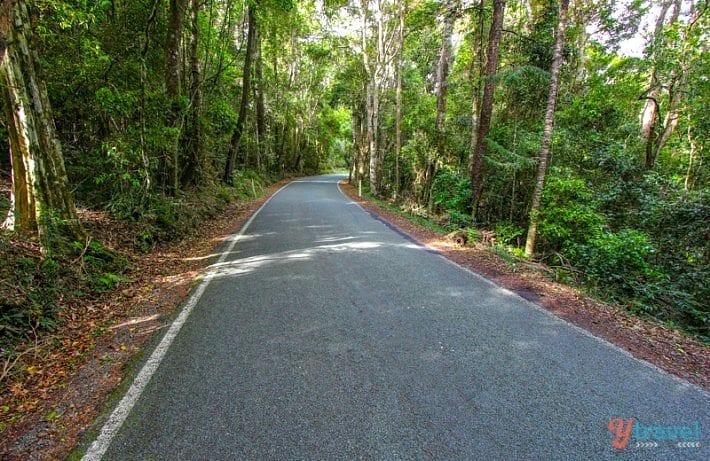 Sometimes the best places are hidden away to preserve their sanctity. The chaos of life cannot enter here. There’s just ancient forests, birdsong, potoroos and simplicity.

Up here in Lamington National Park there are no shops or roads, only a lodge, a Lost World Day Spa, family friendly rainforest retreats and luxurious Eco-Villas.

And beautiful villas they were at O’Reilly’s Rainforest Retreat. 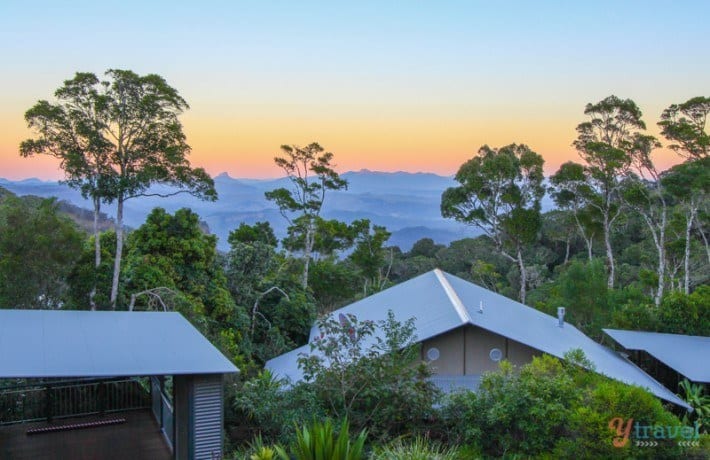 Modern, contemporary, spacious, and self-contained and designed to melt into the Gondwana rainforests of Australia setting.

You’ve got green mountain views from the balcony, or through the glass fold-back doors if it’s a little chilly. But, don’t worry if there is, the gas fireplace in your rainforest villa will warm you up. 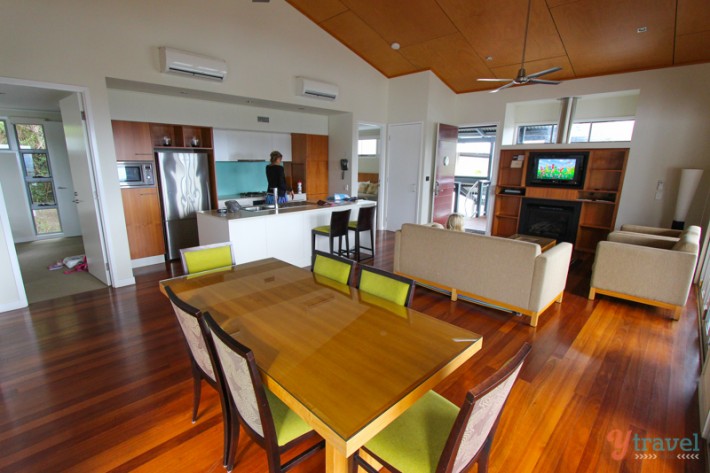 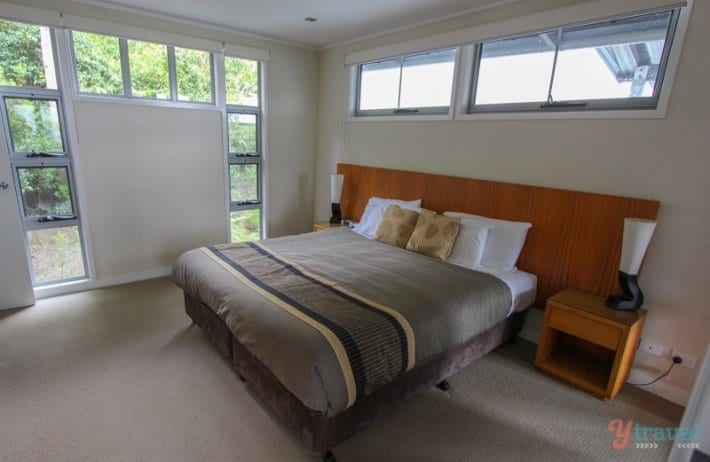 Thankfully, it wasn’t too cold for us to enjoy a spa bath on the balcony with a cold glass of wine after one of the most awe-inspiring days we have had as a family on this Australian road trip.

O’Reilly’s Rainforest Retreat is the perfect spot to unplug on a Gold Coast family holiday.

Can you see the joy on our faces sharing this moment together? 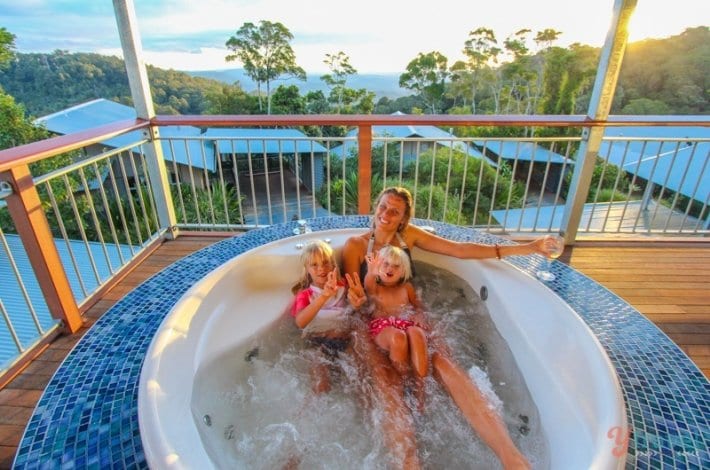 Only an hour earlier we’d been yahooing suspended 30 meters above the ground as we zipped along a 180m cable over the rainforest.

Back and forth we went on the flying fox. Not just Craig and I, but the whole family. Yes, it’s a moment I’ll never forget.

The girls watched me as I set off first, zooming above the forest and waving to them down below. 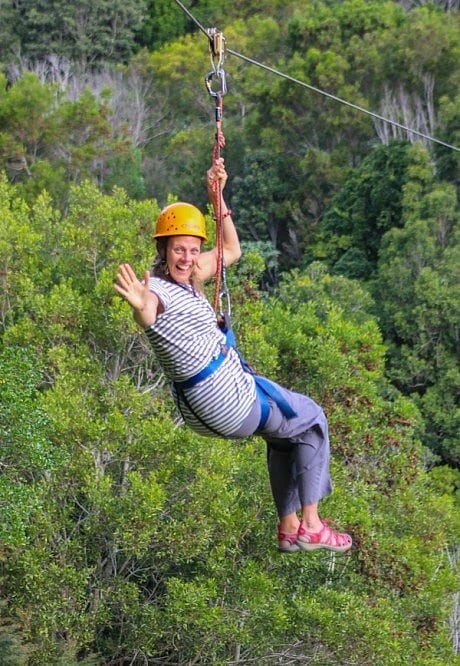 They were harnessed up just in case, but I wasn’t expecting a just in case. I hopped off at the end ready to tag Craig when Kalyra piped up and said, “I”m going to go on it Mum.”

I looked down to my knees at the eyes trying to peak out and above the helmet engulfing her head.

“You want to go Savannah. Are you sure? It’s very high up.”

She turned and walked off with Craig and Kalyra.

“I’ll come get them if they change their minds.” I shouted at Craig knowing that when they stood on the edge of the platform they’d chicken out. It’s a long way down from that vantage.

I watched from afar as a tiny speck walked onto the platform and got connected. My heart started racing and my breath caught in my throat.

I screamed to the catcher behind me. She walked straight to the edge of the sloping platform holding Craig’s hand until he could hold it no more and then weeeeee off she flew. 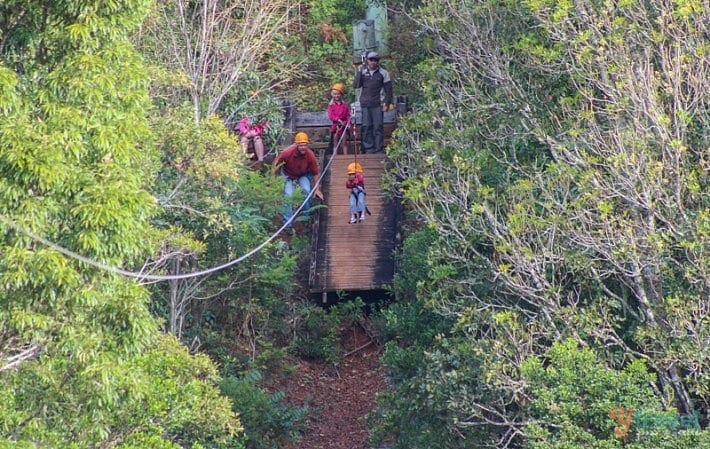 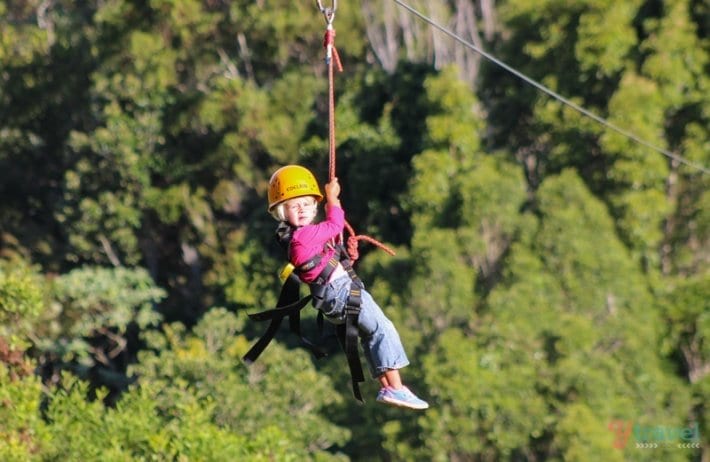 She faced fear head on, my two and half year old, the youngest and smallest to take on the flying fox at O’Reilly’s Rainforest Retreat went soaring through the air, 30 metres above the trees holding on and looking around.

Her spirit made my heart soar with love and admiration. She was a little shell shocked, but said she had fun.

We sat and watched Kalyra get ready to go. I could tell she was scared and, if her sister had not just shown her how it was done, I’m sure she would have bailed.

But she followed in her footsteps and away she went. There was no silence from her, only pure squeals of joy. 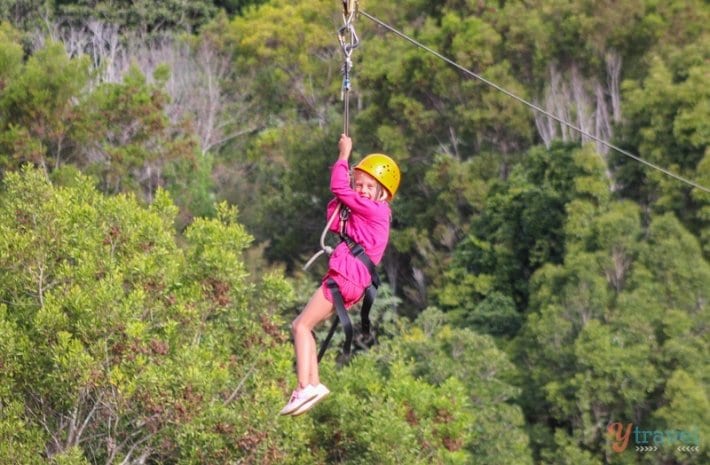 And off she went. We had to drag her away after her sixth go.

Savannah said she wanted to go again, but this time she pulled out at the last minute. Now she knew what it was really about and the fear grabbed a hold of her.

But, after watching us have so much fun for the rest of the afternoon, she decided she could no longer hold back. Up she went again and this time she took off.

She did get off that ride and took the helmet off with a very firm , “No more. “ She does love to tell the story of the Flying Fox now and she always says how she was not afraid.

I was so super proud of my girls for displaying such courage despite their fear. I think it taught them so much about fear and how we can move through it and still be alright.

When you go to O’Reilly’s Rainforest Retreat soar on the flying fox! It will enhance your Gold Coast family holiday memories. 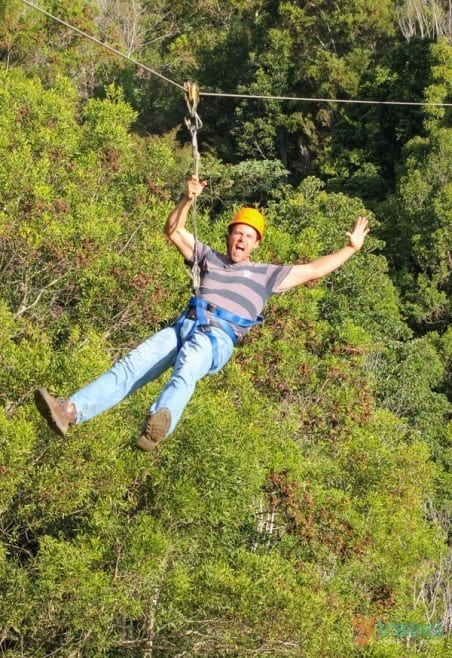 It wasn’t just the flying fox that made it such a special couple of days for us. We also enjoyed a couple of wildlife shows that the retreat puts on for their guests.

The Birds of Prey Show was a highlight for the girls. They loved getting close to wedge-tailed eagles, barn owls and kites and learning all about their skills as hunters and flyers.

Kalyra can now recognise these birds when we’re out and about and I love how much she is learning because of experiences like this. 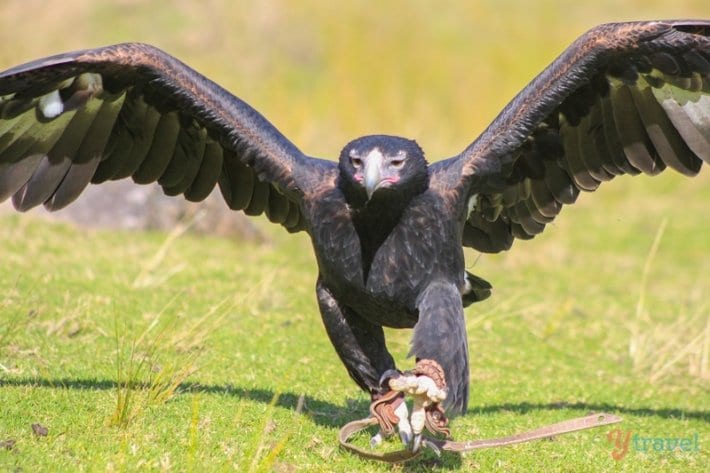 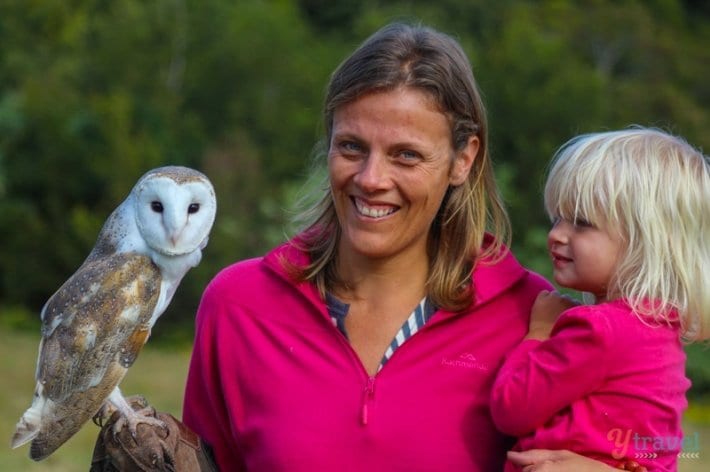 If you’re a bird lover then you will love coming out to O’Reilly’s Retreat.

I don’t know much about birds except that Australia has more species than any other country. And I met plenty of bird lovers who were recording each of the ones they’d seen in small black notebooks.

One couple from the States had seen over 350 on their five-month tour of Australia. They came over here for bird watching and O’Reilly’s Rainforest Retreat was one of their first stops.

The Lamington National Park is renowned as one of Australia’s premier birding areas with over 232 recorded species.

I had risen early to join the bird watching tour. I didn’t care much for seeing the birds, I just wanted an early morning walk in the forest without any children climbing all over me.

I surprisingly enjoyed myself and loved looking at all the birds. 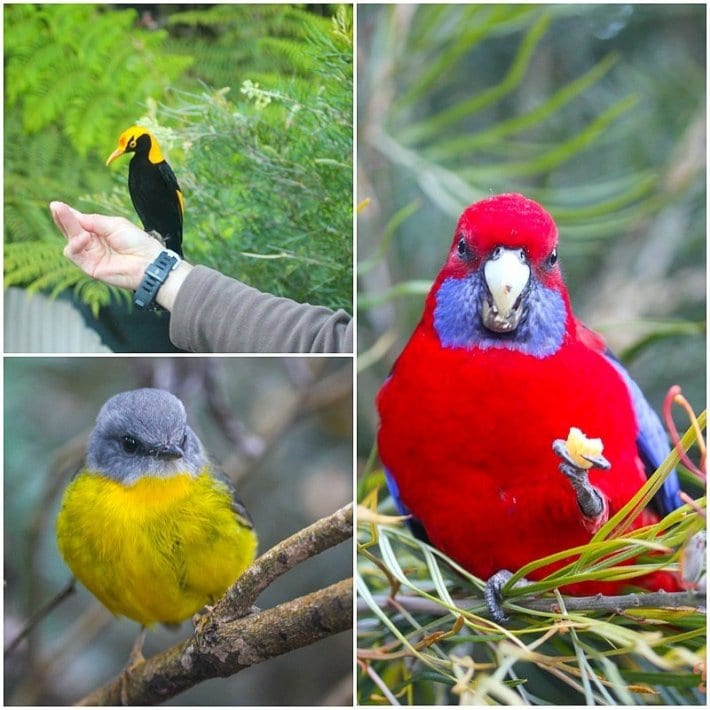 There are so many of them and so pretty and their personalities so different and cute.

I didn’t mark any off in my book and I can’t remember many of their names, but I enjoyed their little beaks snatching walnuts from my fingers.

And I thoroughly enjoyed seeing the passion the others in our group had for birds and the joy on their faces when each new one flew on our path.

Isn’t travel a wonderful portal for pursuing those things that make our heart sing?

Craig was able to break off and have his time out later once the sun had warmed up the mountains. 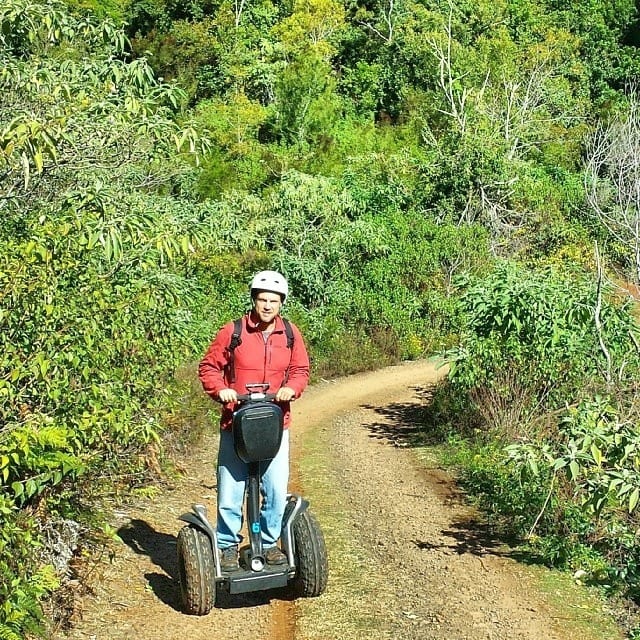 It was his first time on a segway, and whilst he said it was a little weird at first, once he got the feel of it after a 30 minute training session, it was easy going.

The 90 minute guided segway tour goes to the lookout point over the top of Moran’s Falls: 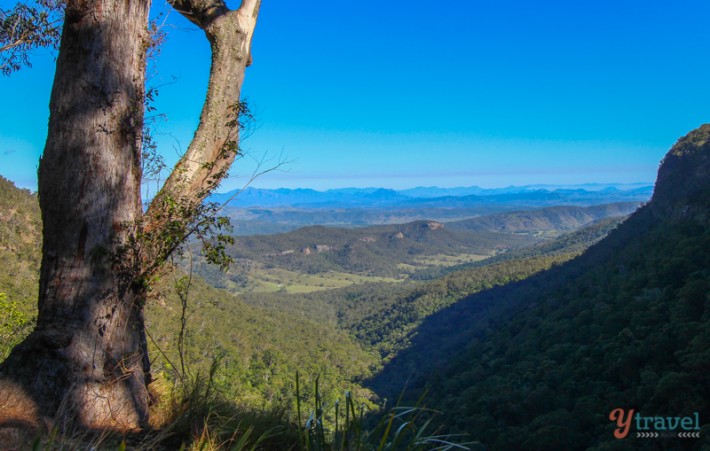 On our first afternoon, we took the lovely Tree Top Boardwalk through a canopy of flowering and fruiting vine-covered trees.

The Tree Top Walk was the first of its kind in Australia, is 180 metres in length and is made up of 9 suspension bridges, with much of the walkway being 15 metres above the ground. 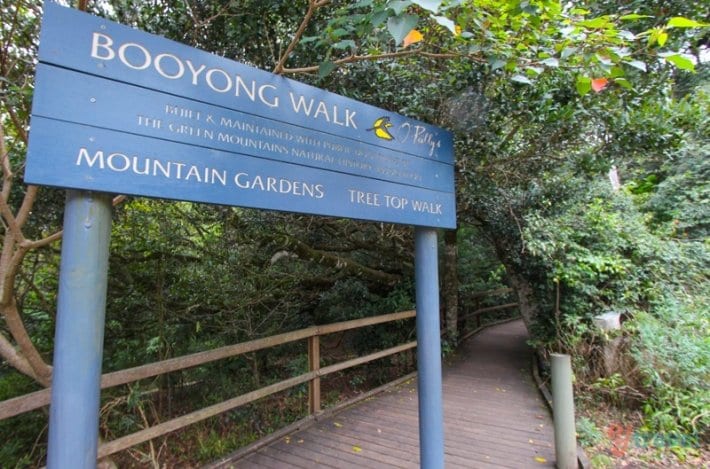 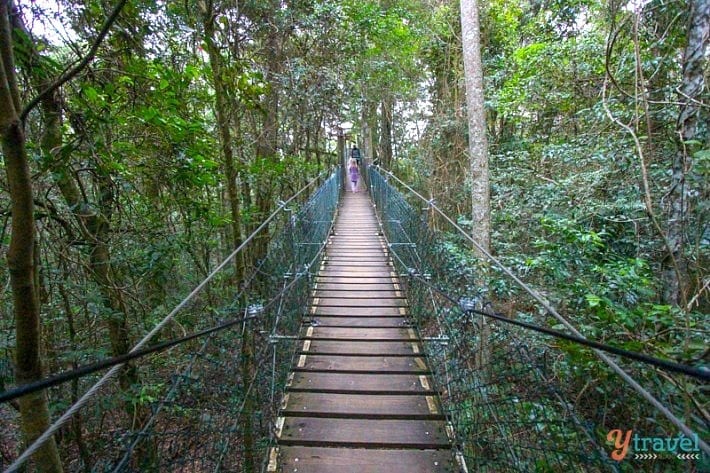 There were ladders going up a Strangler Fig tree to an observation deck 30 metres above the ground. The views of the Lamington National Park out to NSW and Mt Warning were stunning.

The Gold Coast Hinterland is something special.

I should have realized then Kalyra would have done the flying fox as she scrambled up the tree with her daddy to take a look. Savannah wanted to do the same, but fearful Mummy pulled her back ( I have a slight ladder phobia).

There’s a great story behind the family run O’Reilly’s Rainforest Retreat. Three generations of O’Reilly family have been welcoming people for over 90 years into their home and beautiful backyard.

We met two generations in the breakfast room, both were very warm and friendly chatting to all their guests. Jack was even popping bread in the toaster for everyone.

On the 19th February 1937, a Stinson airliner crashed into the Lamington Ranges killing four of the seven on board. A search failed to turn up any wreckage, but determined to find the plane, Bernard O’Reilly set out on foot to find it in the thick bush.

He found it along with two people still alive and in desperate need of medical help. They were rescued and survived.

You can follow in his footsteps by following the 35km Stinson walk trail. O’Reilly’s offer guided hikes to the crash site.

The Lamington National Park contains over 160 km of graded walking tracks and a similar distance of walking trails that lead to lookouts waterfalls and some of Queensland’s most significant wilderness.

O’Reilly’s offer guided walks or you can set out on foot yourself on any of the trails that suit your fancy. There’s the fun creek crossings to Morans Fall, a popular walking track from O’Reilly’s.

The Border Track is a popular full-day hike between Green Mountains and Binna Burra. Boasting stunning scenery and spectacular views, the Border track is the backbone of the national park and part of the longer Gold Coast Hinterland Great Walk 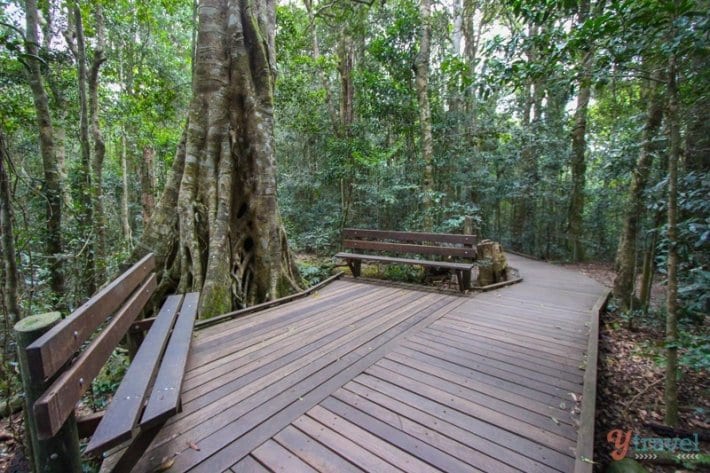 We enjoyed some happy hour cocktails in The Rainforest Bar.

It wasn’t a clear night for us, but sunset on the verandah overlooking the mountains with views that go on forever is spectacular (although it was also quite good from our room in the spa!). 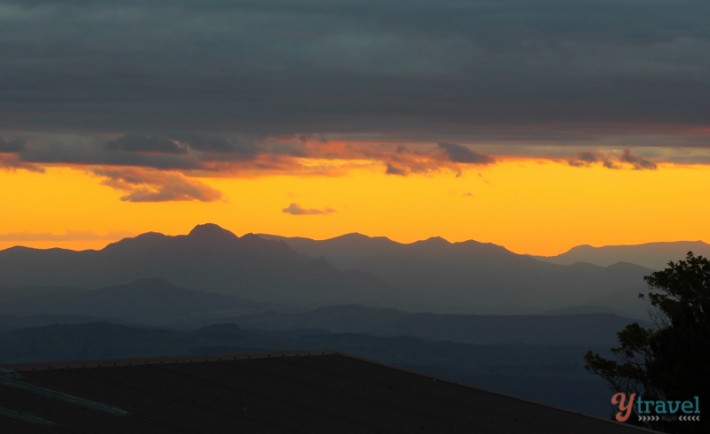 For dinner we dined in the dining room, which is opened for buffet breakfast and A la carte dinner.

The food here is exceptional, the soup of the day was one of the tastiest soups I’ve had and their pizzas are to die for.

Go to dinner early if you want to see the glow worm tour at 8pm in the evening. We did find service in the dining room and lunch cafe a little slow. We had to scoff down deserts and the girls had to leave ice-cream in their bowl. (Tragedy I know!!)

It was worth it though as the glow worm tour was really awesome. Again, another experience where my girls absorb the magic of the world they live in.

Our guide kept us entertained as we walked through the bush by torchlight to the Glow Worm Grotto. Hundreds of them sat on the rock wall at the edge of the creek, luring insects into their home using their bioluminescent taillight.

It was truly spectacular and our guide was very informative, and humorous, about the life of a glow worm. We also saw many bandicoots along the walk – the first I’d ever seen in the wild.

You can check out more adventures in the Gold Coast Hinterland at Binna Burra here and Springbrook National Park here.