After being terrorized by a tick, we decided to bail out of Narooma.

On the surface, that sounds ridiculous, ran out of town by a tick. But, there was no way Kalyra was going to stay in Narooma.

It had freaked her out that much she sat in the car whimpering and demanded all the windows be rolled up. The first question she asks about every new town now is, “Are there ticks there?“ like a hundred times.

After a couple of nights spent at a nearby town, we felt brave enough to venture back.

We’re so glad we returned. Narooma is stunning. The scenery is breathtaking and so unique. I don’t think I have ever seen water that colour before in any other place in NSW. 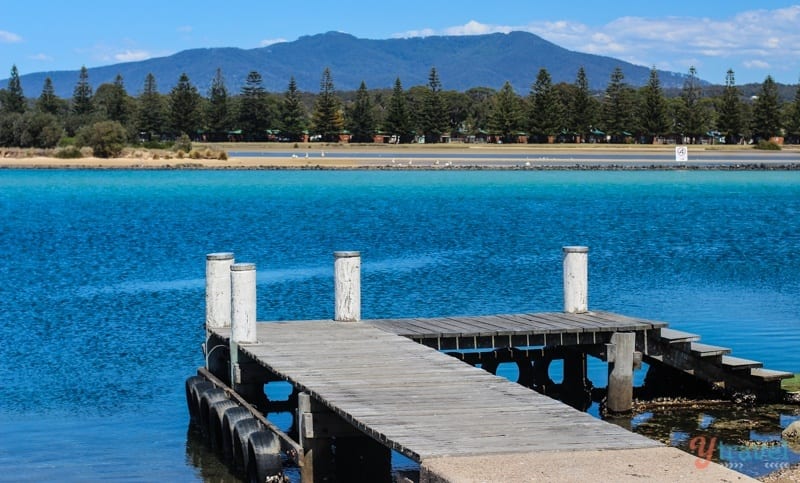 We explored Narooma tentatively and on bikes. There is a fabulous boardwalk that wraps around the inlet to Bar Beach. There’s a picnic area and playground for the kids with beautiful views back over the inlet and Mount Gulaga.

The boardwalk is great for walking or cycling, and if you time it right, the chances of seeing stingrays close to shore are high. The water is so clear you won’t miss them. We timed it wrong, but saw plenty of fish and a jellyfish, which Kalyra could not help but write about in her journal, especially because it was pink! 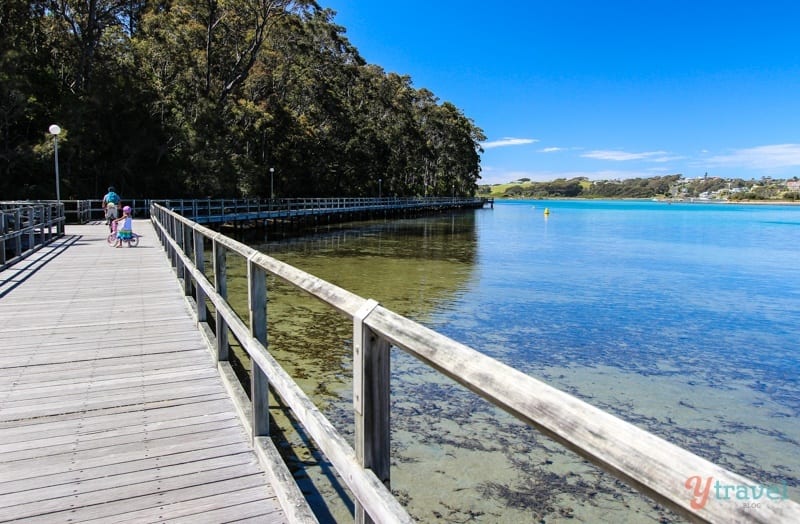 The bike trail continues for 12 km to Dalmeny Beach, but Kalyra was not up to riding that far. We only went around the corner to the headland before the bugs proved too much for her sanity and she melted down. 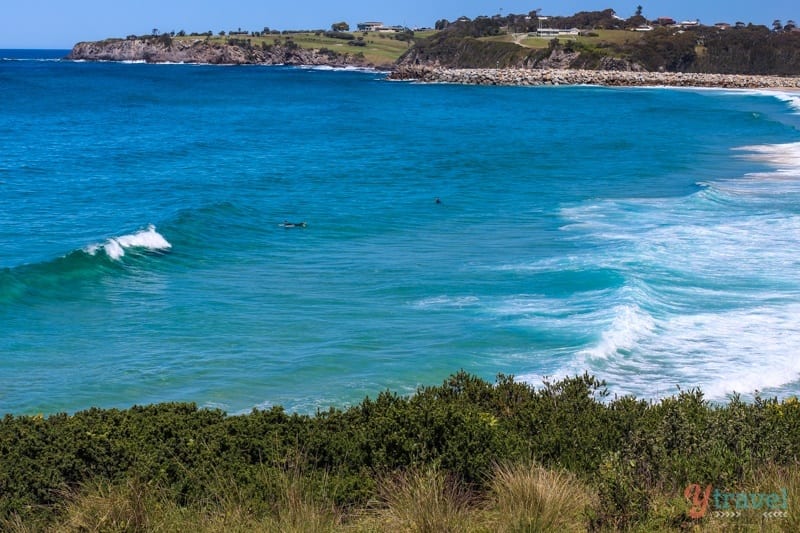 We drove around there the following day, and saw more of them frolicking. I had goosebumps thinking how incredibly lucky we are to be surrounded by rolling green hills, and mountains, abundant land wildlife, and then have whales dancing and playing nearby.

Watch this video of our cycling around Narooma:

On one other lazy afternoon, we jumped back on the bikes for a pedal around to the Foreshore Park and discovered a fantastic tapas bar and restaurant, The Quarterdeck. We had coffee and cake with views out to the inlet. 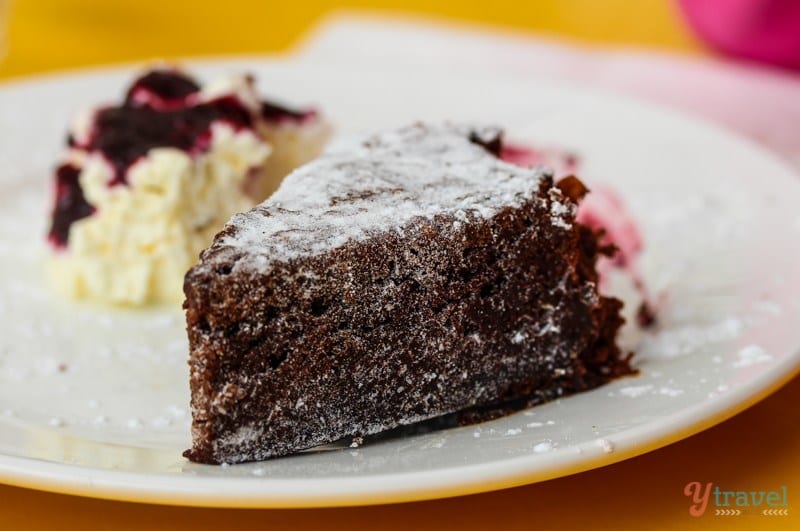 It’s a popular place to come for meals and to hand feed the fish just off the jetty. The girls had a serious buzz doing this.

For pretty nice views over town, the Lookout just out of town. (Head north over the bridge and about 3-5 minutes on the left is a small sign that says lookout) and you get 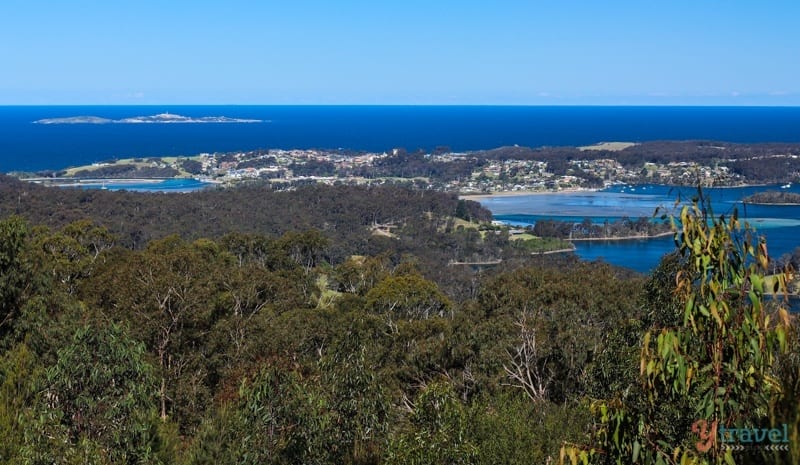 For a really special view, you must head to Bar Lookout. Wowee! It’s just a swirling piece of brilliant blue beauty. 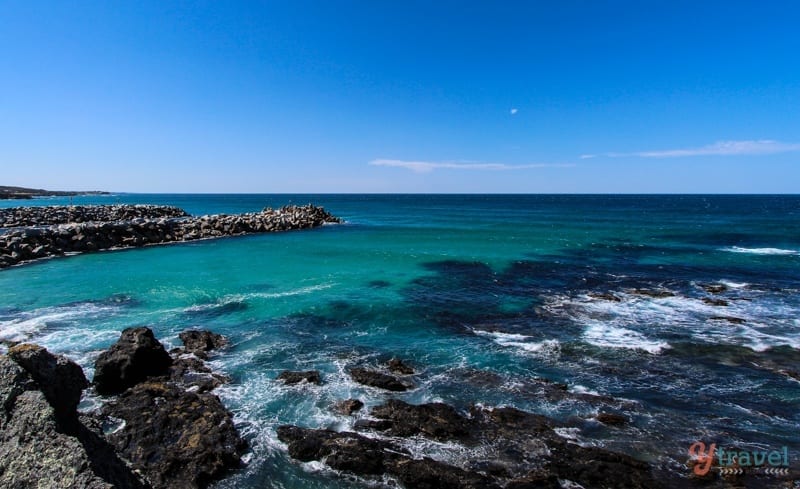 You must also head down the stairs to Australia Rock, a natural rock formation. I think this is one of the coolest things, I’ve ever seen in Australia.

Why there were not crowds of people checking this out, I don’t know. It has to be up there with Uluru right? And for the best timing be there at sunrise!

Where to stay in Narooma?

We stayed at the Big4 Caravan Park right on the water and in the centre of town. They have cabins and powered sites for camping and your own caravans.

Want to learn more about Narooma? Read what other travelers have to say at TripAdvisor