I don’t think I enjoyed Kalbarri, Western Australia as much as I should have.

We visited at a time when I was tired and jaded. We’d not long explored the magnificent Karijini National Park and it’s hard to experience wows that can compare to such pristine beauty.

There was the problem of tired and wingy children, really hot weather, crazy wind, and insane flies.

I had no coping mechanisms left.

So when we hopped out of the car at the inner gorge section of Kalbarri National Park to do the 1.4km return walk to Z-Bend lookout over the gorge below, they started on me and I slowly began to fall apart. 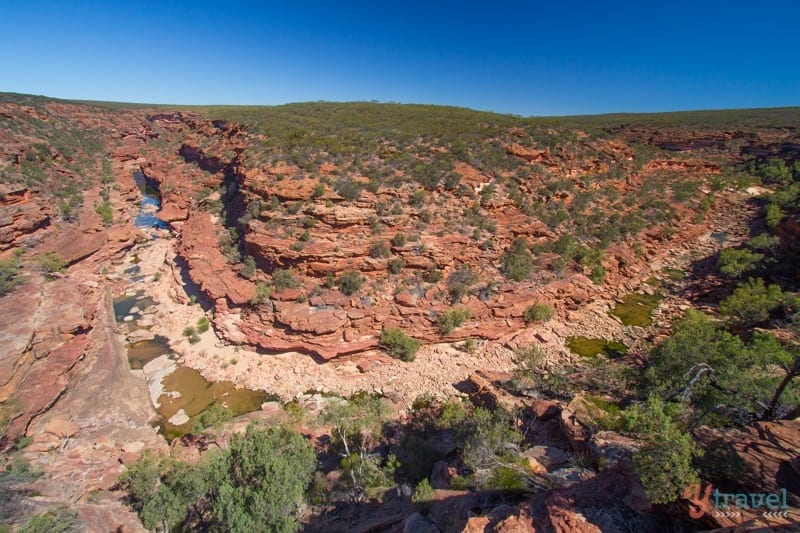 It was a constant harassing of HUNDREDS of flies covering my legs, climbing up my nose, crawling behind my sunglasses around my eyes and trying to get into my mouth.

I don’t even think a cork hat would have been any good at shooing them away.

The intensity of the heat hit as soon as we started walking as well. It wasn’t that hot in Kalbarri town, so we kind of dismissed the lady in the visitor centre who warned us about the heat in the national park. Plus, we’d just come from Karijini, which was killer heat.

It wasn’t that bad, but when you combine the heat with fending off the relentless flies and trying to do the same with your kids and manage their ensuing meltdowns, I turned to Craig and said,

“Quick take your photos, and let’s go. I don’t care how pretty it is. We’ve seen Karijini and it couldn’t be better.”

We drove to a few other lookout points that were close to the car park. We kept the kids in the car and tag teamed, each running the short 400m track to the lookout to beat the flies. A quick look at the view and a sprint back to the car.

Until the last one. It was Nature’s Window, the most famous and photographed spot in the park.

It was a paved path so we popped the girls on their scooters and sent them on the way.

“Arrrrgggh. Get them off me. Muuuuummmm the flies are all over me. Get me outta here. Get them off me.” Kalyra’s meltdown arrived with the amplification of the fly invasion at this scenic place. I was slipping into meltdown mode as well.

“Just keep riding, and you’ll shake them off.”

She was in no state to listen to my advice and started wailing and screaming even louder. We made it to the view and stopped to look at it.

The little black stealth bombers found their chance. My legs and face were covered in small black crawling dots. Just looking at Craig’s day pack covered in the flies made me want to throw up.

The heat was made all the more unbearable because of them and I could not cope with the kids anymore.

“Right. Take your photos Craig. I’m taking the girls back to the car NOW.” 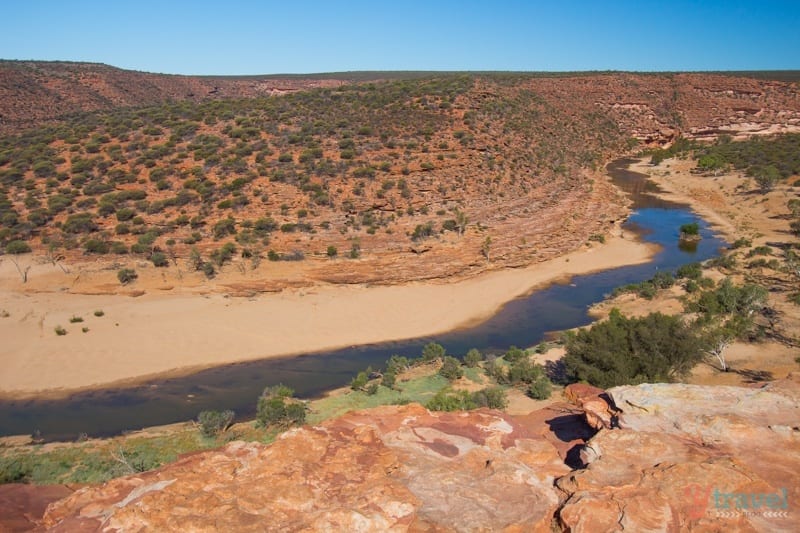 I popped Savannah on her scooter, held her back and ran with her up the hill. “Quick Kalyra scoot for your life. Don’t stop just keep going.”

We bolted back to the car in record time and dived in, slamming the doors behind us. “That was hideous.”

Disappointment and slight shame set in. We were standing in front of a stunning vista and I didn’t care one bit.

I knew then that it was time for me to stop sightseeing so much and slip more into rest mode and slow travel.

It happens after you’ve been travelling for a long time. Things start to blend into one another; you’ve seen some of the best so the rest gets glazed over. When really you should be taking the time to absorb the unique beauty each place has without comparison.

When you get to that stage you need to reassess and make some changes.

The next day, we explored the other side to Kalbarri National Park – the coastal side.

We did it slowly and broke it up with a lunch stop in Gorges Cafe, which had the best coffee we’d had since Broome and is the best cafe in Kalbarri hands down! 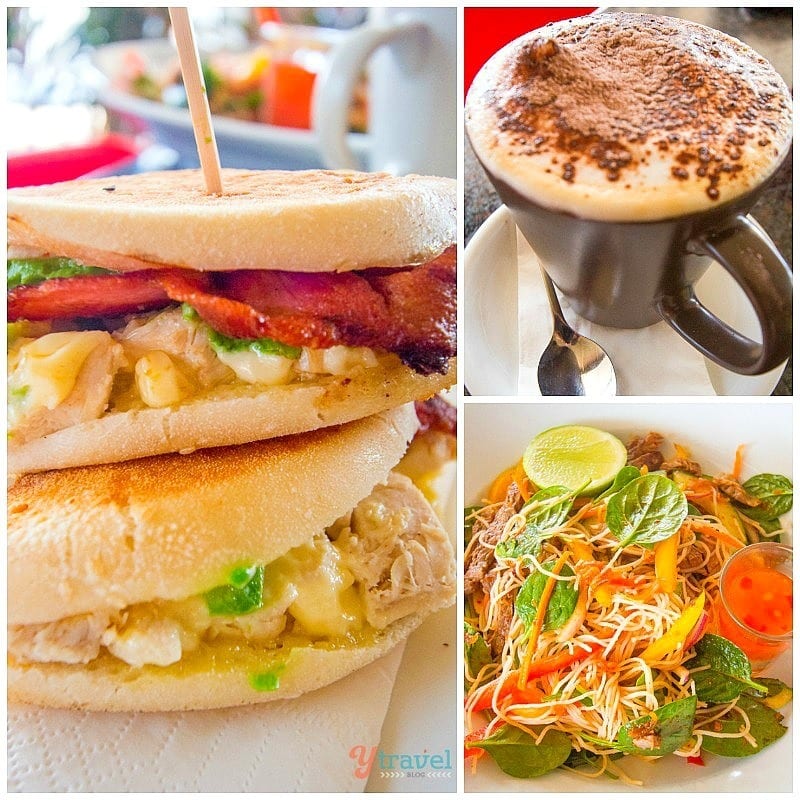 You don’t get good coffee in Karijini! It helped us make the day more relaxing.

It wasn’t as hot being on the coast and having that cool breeze meant the flies weren’t as bad. AS bad. They were still gross, but the wind kept them away.

The coastline was stunning. 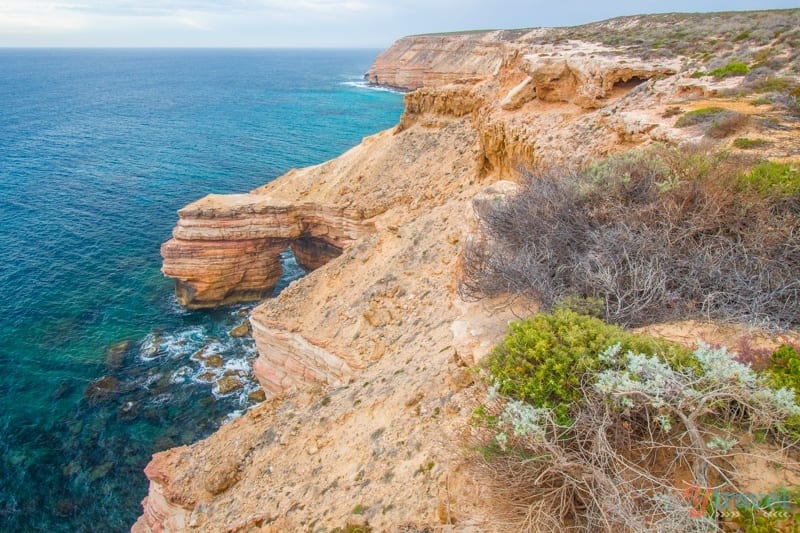 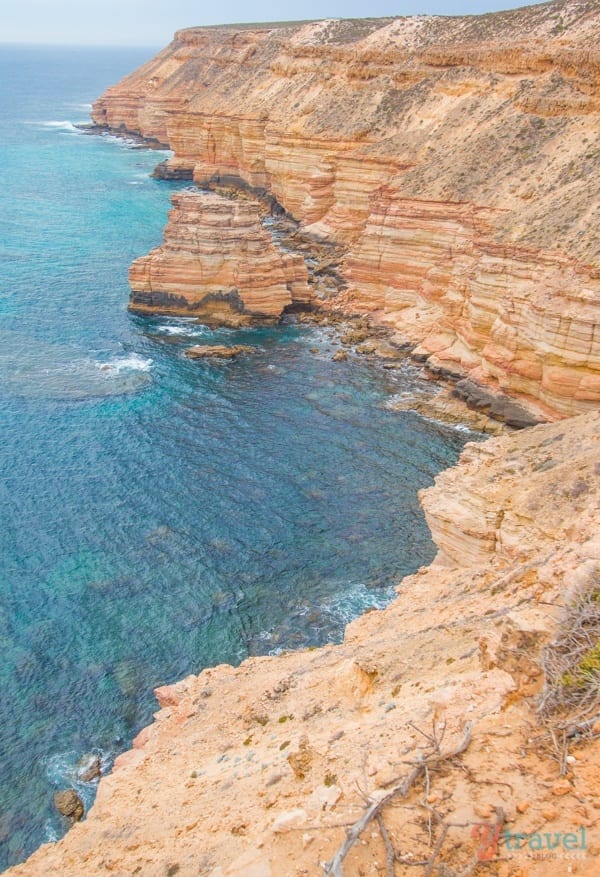 We experienced most of the 8km coastal walk in sections, driving from point to point and then walking to the various lookout points along the way. 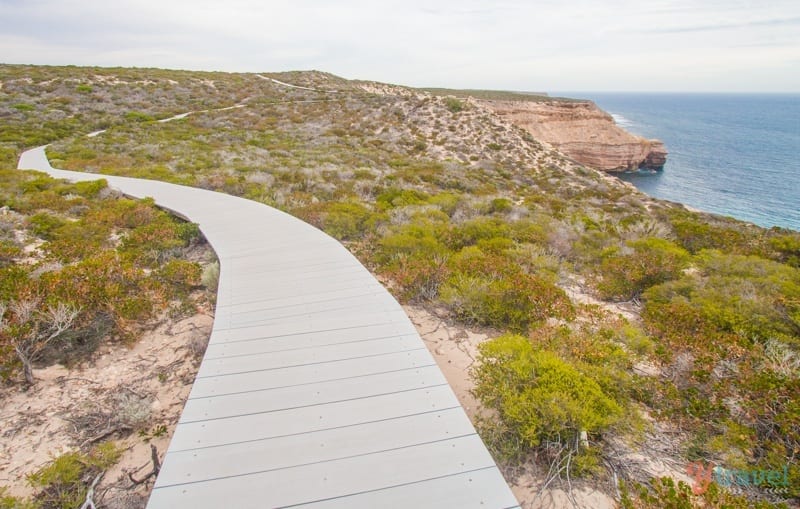 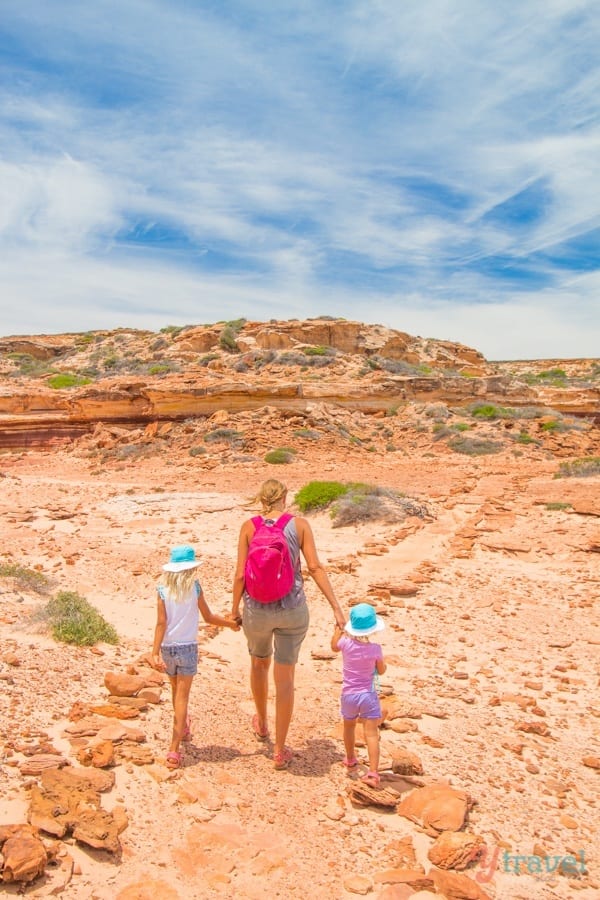 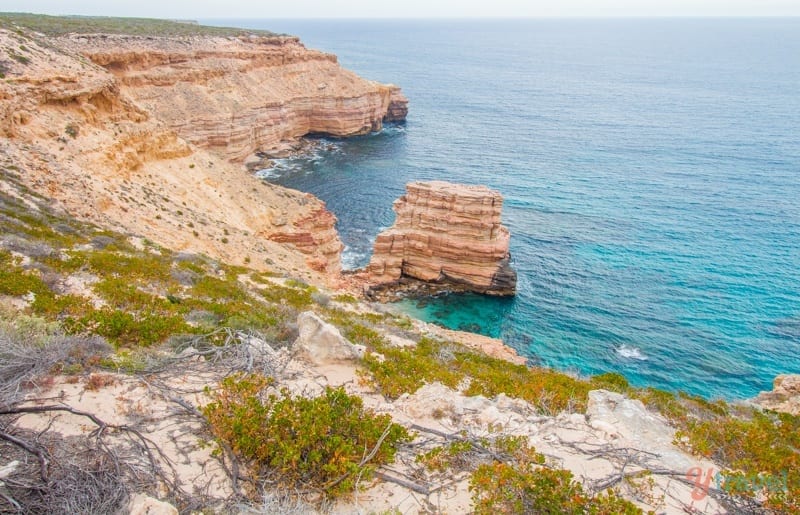 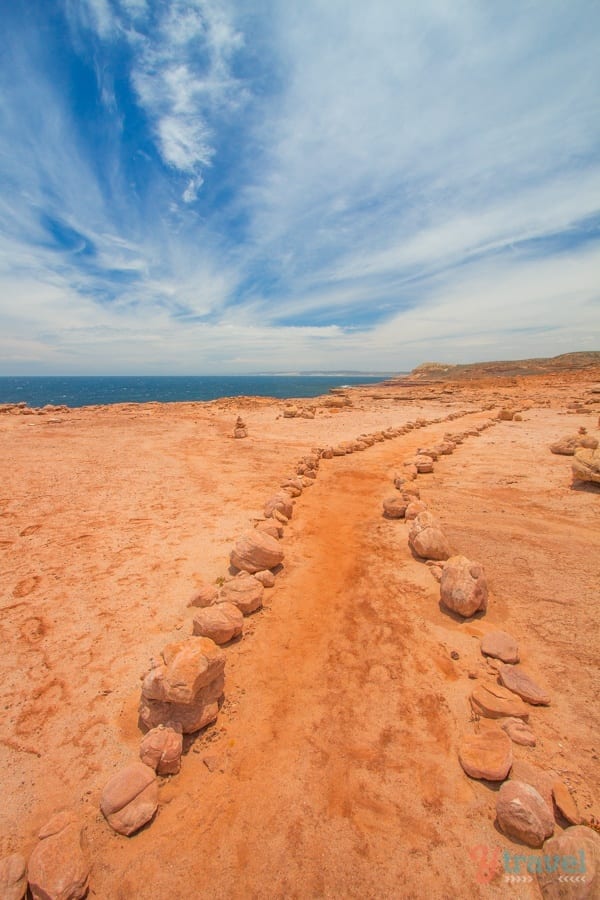 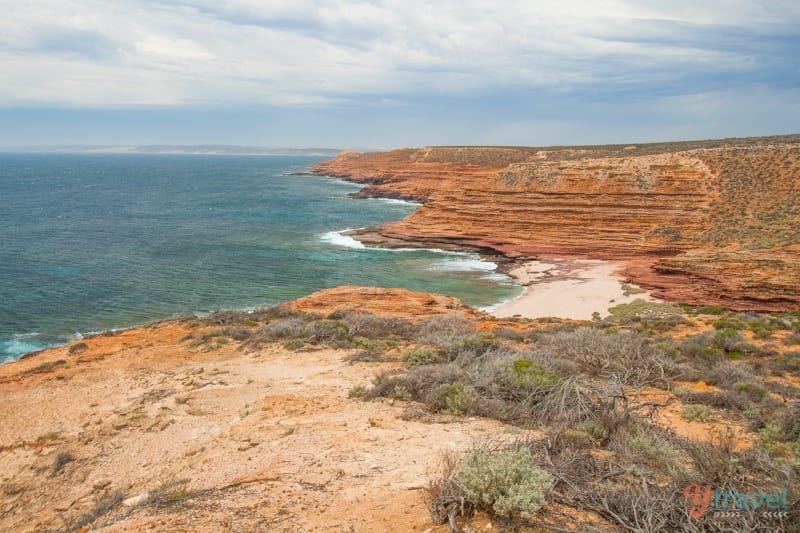 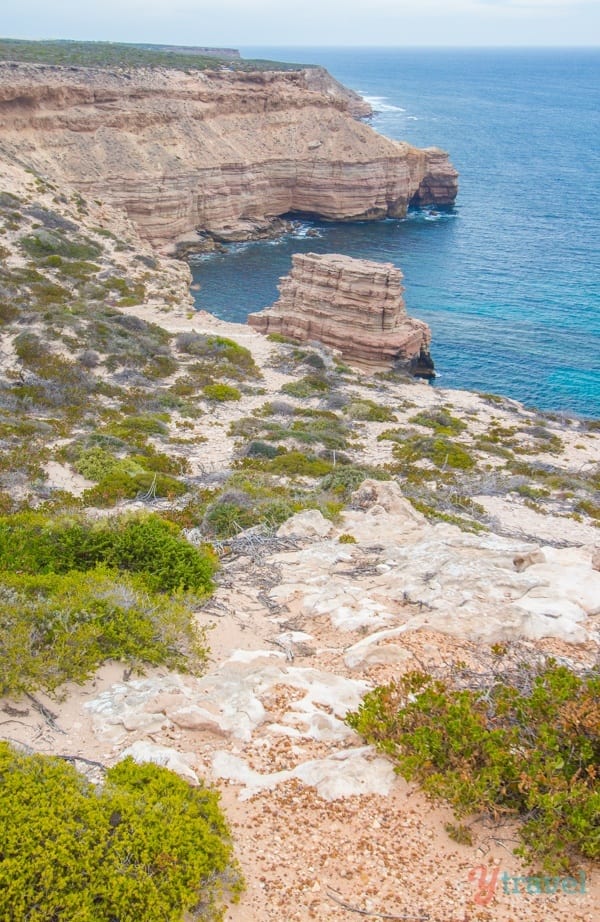 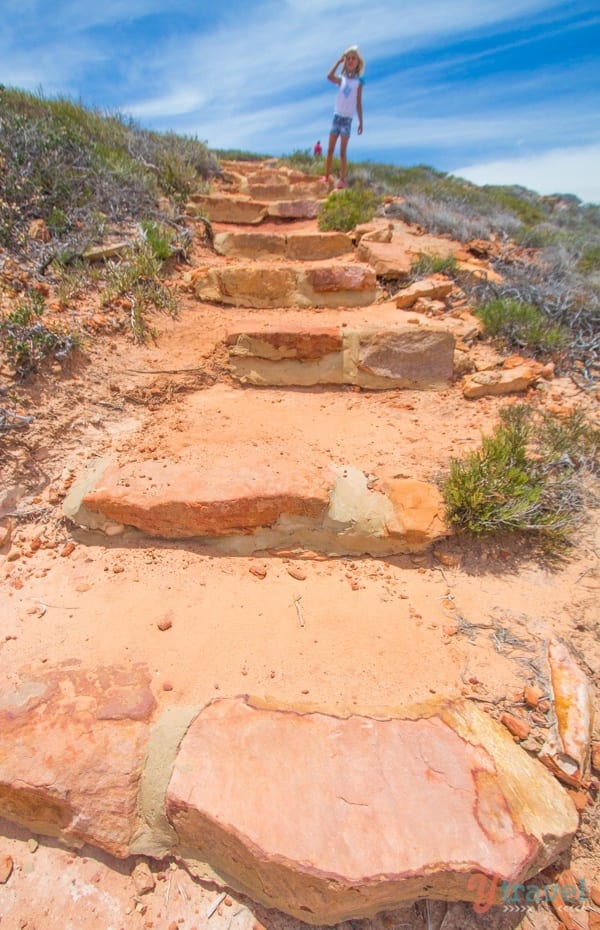 Principality of Hutt River – hanging with The Royals

We then broke up our Kalbarri visit by going out to Hutt River Principality.

Hutt River was a Kalbarri highlight and had me fist pumping Prince Leonard. Kalrya kept asking me why I was giggling as we walked into Hutt River Post Office and through the “town” I found it very difficult to explain to her that Prince Leonard completely screwed over the government and created his own country. 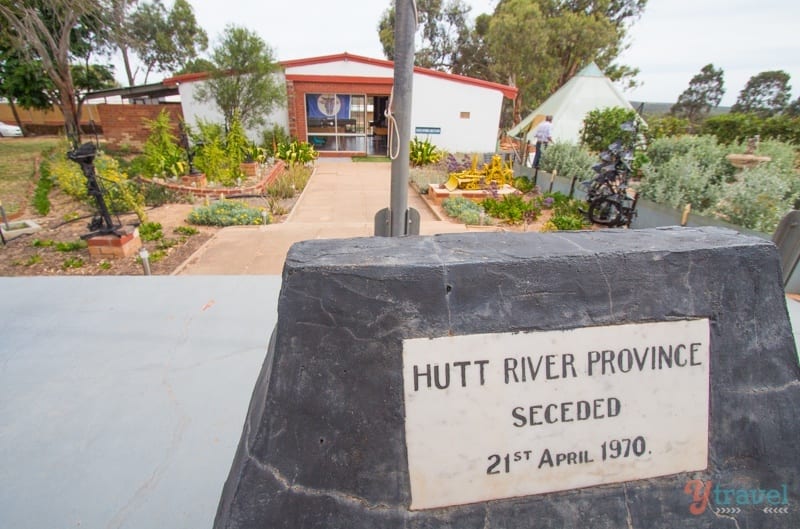 He and the residents of Hutt River (i.e. his family members) all have, and travel on, Hutt River passports. His son greeted us when we arrived and said,

“The Prince will be with you shortly, he is just having his lunch.”

I fought back the giggles and went to read the plaques behind the statue of the Prince when you first arrive to see what this was all about. 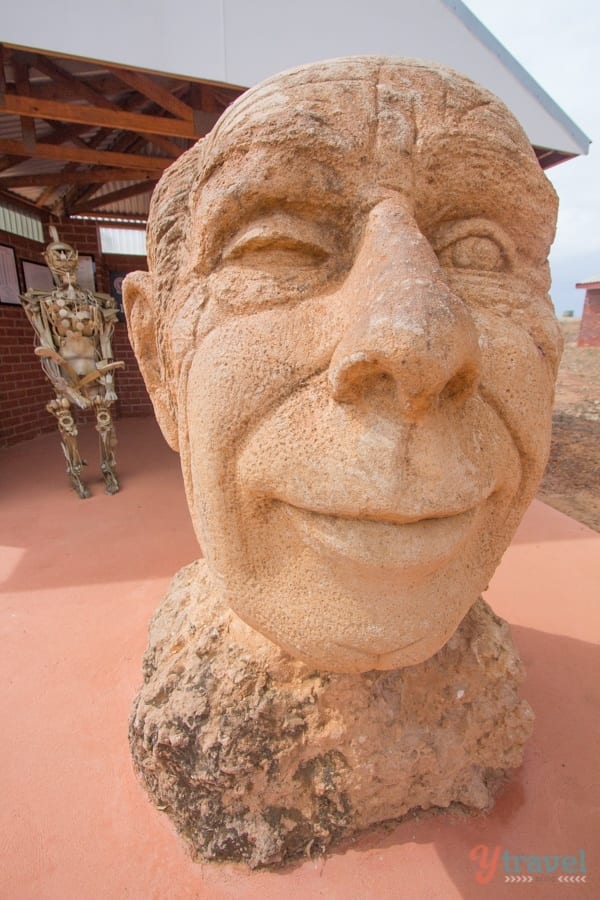 Prince Leonard is an intelligent man and when the government tried to take some of his wheat farming land off him, he found some loopholes in the law and discovered that Western Australia had not been formed properly as part of Australia.

Therefore, his land was not actually Australian land but part of Britain. It’s still a little confusing for me, but he managed to stake the land as his own country – Hutt River Principality.

He became a pain in the government’s ass and they tried all they could to shut him down, but he was victorious. So he pays no Australian taxes and does not have to follow Australian law. It is hilarious. I never even knew this place existed.

Prince Leonard is also very witty and belies his age of 82. He showed us around his trophy room sharing all the memorabilia he has collected from Heads of State and Royalty from around the world.

It was fascinating talking to him and hearing his story and one-line jokes.

As you leave you can visit the Post Office to get your passport stamp. Of course, they have their own currency. 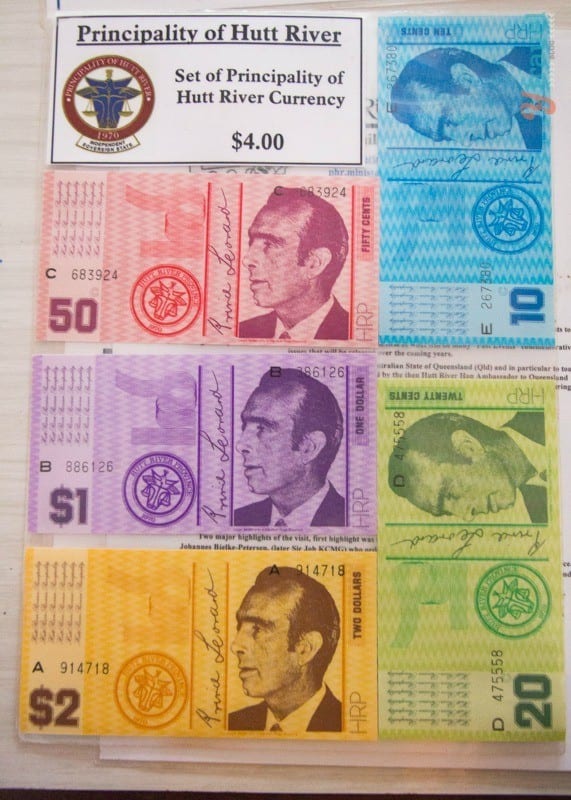 Hilarious. Wish we could all screw the government like that and not pay any taxes!! They take so much from us Down Under. Prince Leonard is my hero. 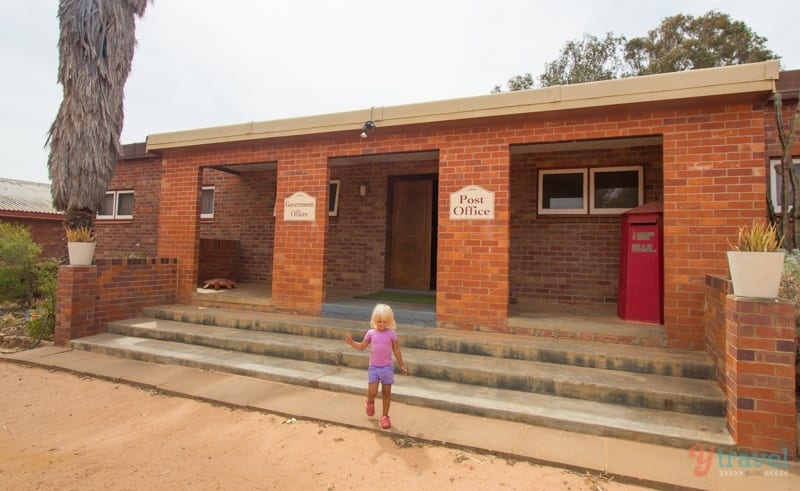 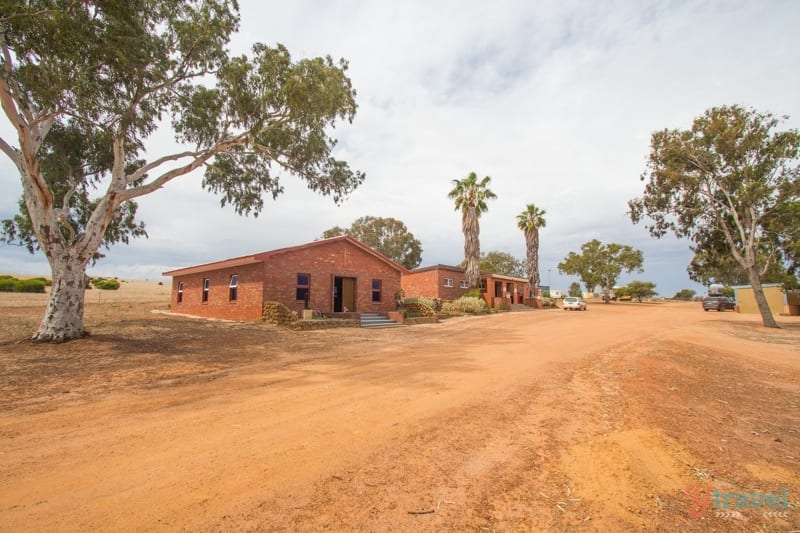 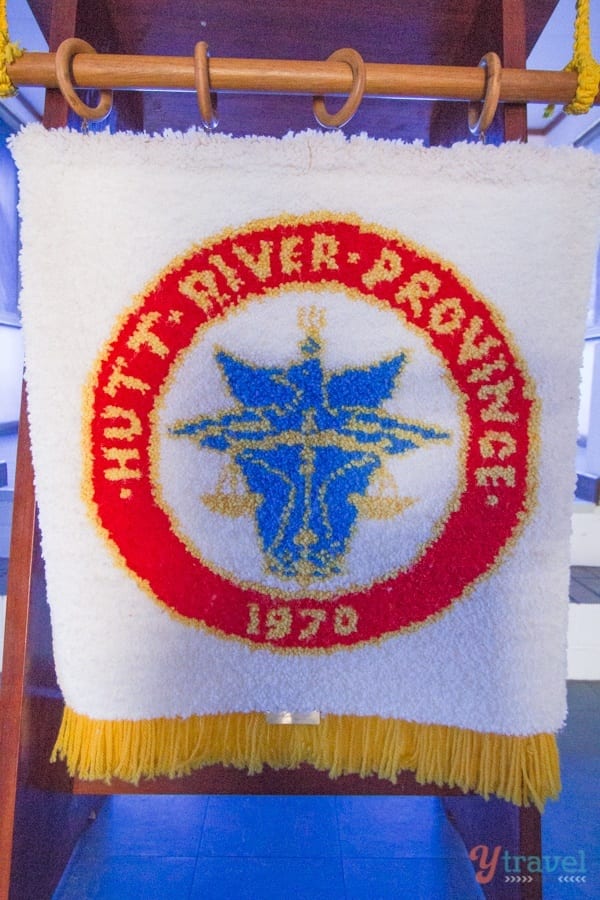 Kalbarri is definitely worth a visit.

The town itself is quiet, but beautiful. It sits on the edge of the snaking Murchison River being a backdrop through to the mountains behind. It’s the first part of green you see after coming out of the top end, so your eyes will feast in the prettiness.

If you’re a surfer, you’ll love Jacques Point, a famous surf break and the sunsets are magical to come and see from Chinaman’s beach. 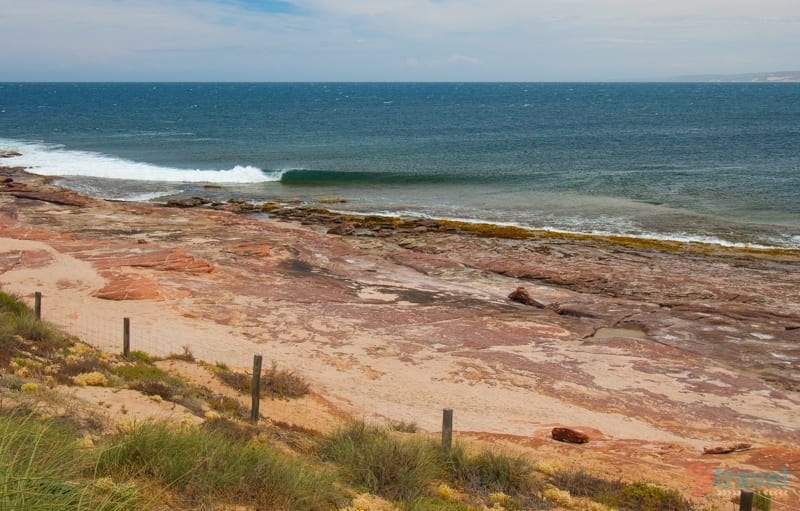 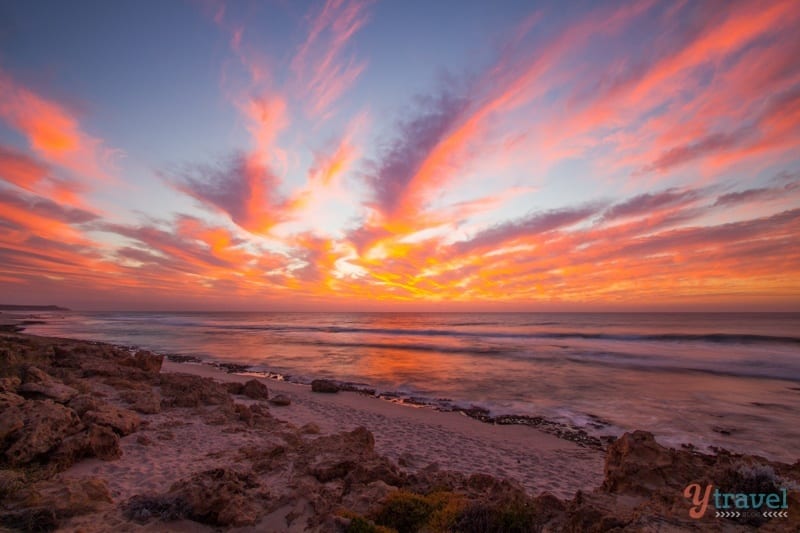 Have you visited Kalbarri in Western Australia? Can you share any tips?
FacebookTwitterPinterest