I love how travel opens your eyes to a whole new world. That was how I felt when I visited Indonesia as a first time backpacker.

When I arrived at the Borobudur Temple in Java I distinctly remember thinking what is this?

In my limited world view from a small town in Australia, places like this didn’t even appear as something tangible.

This was a seventh wonder of the world? The world’s biggest Buddhist monument? What did that even mean?

I knew little about Buddhism at the time, but I was determined to learn and find out. What better place to do that than from within the stone circular walls of a magnificent temple – the ancient Borobudur Temple in Indonesia.

Visiting the Borobudur Temple Indonesia helped ignite what has turned into a lifelong passion for discovering different beliefs and viewpoints.

The more ancient the better and merging them somehow with mine to create a better version of me and the world I occupy.

It’s easy to get caught up in the intoxicating parts of travel, like ziplining across a jungled canopy, snorkeling with colorful gigantic fish, or indulging on the finest wine paired with cheese.

Often it’s the quieter, more grounded experiences that can connect us to something deeper and grant us an insight into an ancient world our DNA has always been a part of, but one we consciously don’t understand or know.

It’s surprising how easy this guide to visiting Borobudur Temple was for me to write more than twenty years after I first visited.

That proves the long lasting effect it had on me and how timeless the experience is.

The History of Borobudur Temple 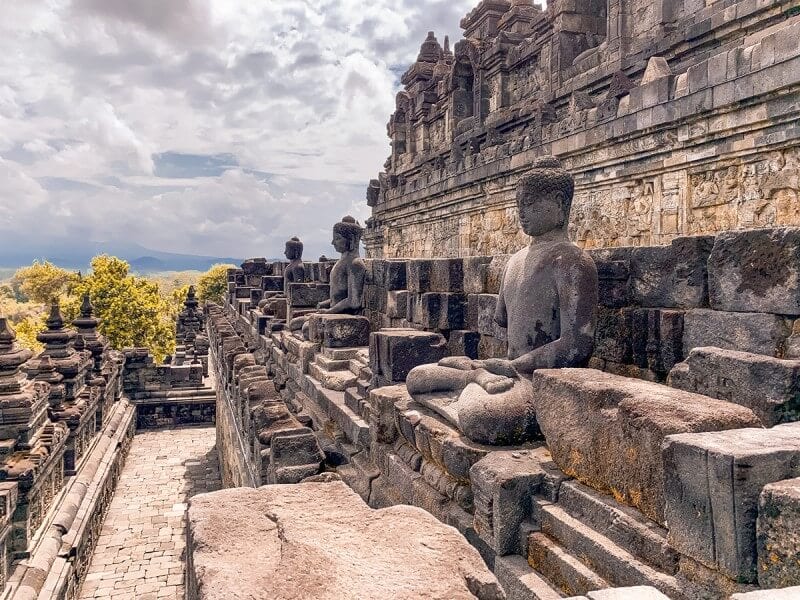 The Borobudur Temple location is in the Kedu Valley, in the southern part of Central Java, Indonesia.

It was once the center of Buddhist life in Indonesia until sometime around the 14th Century when it was mysteriously abandoned and remained undiscovered until 1814 buried under a pile of volcanic ash.

Somehow this massive temple was swallowed up by the trees and vines of the jungle and hidden from the eyes of humanity.

It as the first time I asked the question,

How did something like this disappear? How could the surrounding civilization just allow the vines and animals to take away such a sacred and exquisite monument to the divine?

How amazing is the earth that it just keeps growing and reclaiming no matter what we do? It’s such a force.

I asked the same question in bafflement years later while wandering around the temples of Angkor Wat.

It’s a question I now frequently ask as I ponder the demise of the human race – will the jungle take everything back again?

Why was it abandoned? What was happening at the time? How were the people feeling? What were they doing? Why did they abandon Buddhism and take up Islam?

Visiting places like Borobudur Indonesia keeps the mystery alive for us. 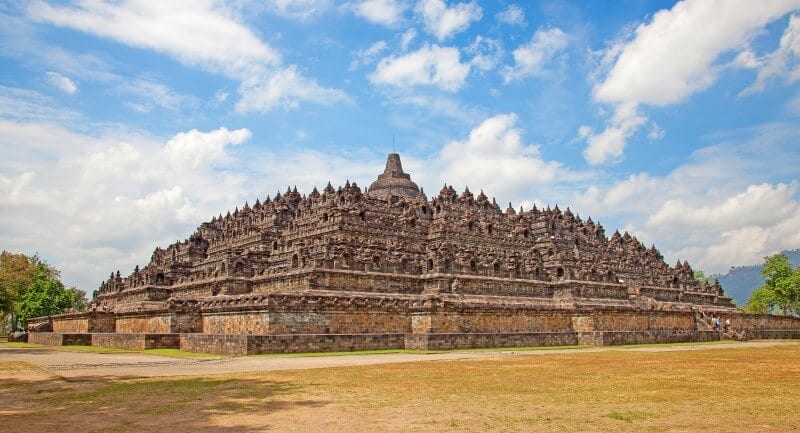 It’s also a good time to marvel on the incredible design of Borobudur Temple.

The Borobudur Temple was built in the 9th century during the reign of the Shailendra dynasty. This enormous temple measures 123 x 123 meters and is constructed of 60,00 cubic meters of lava rock and took an army of workers to build.

It has stood the test of time even though it has suffered through abandonment, nearby volcano eruptions, terror attacks, and earthquakes.

What is most astounding is that this centuries-old temple was built without any cement or mortar, but held together by interlocking pieces. Could we say they hold the patent on LEGO? 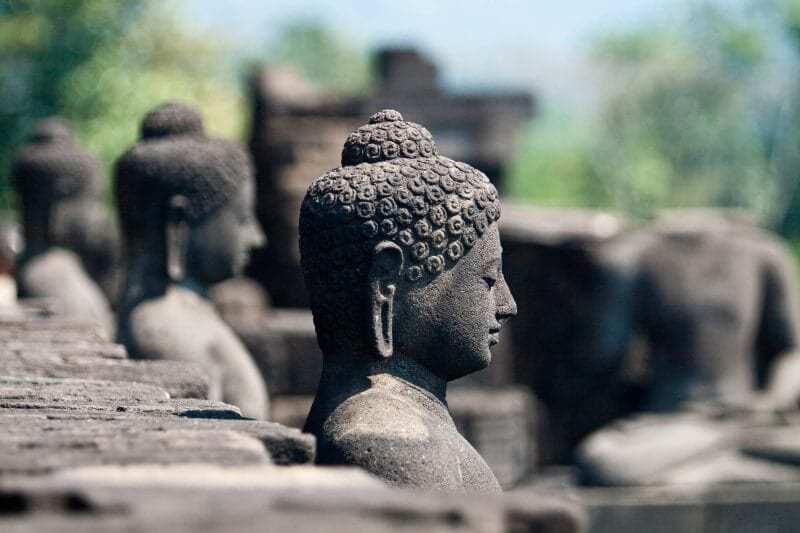 Borobudur is said to mean “City of Buddhas high on the hill” and once you see it you believe it.

Indian influence is evident in the Gupta architecture, although it incorporates many uniquely Indonesian design elements and scenes.

The monument is decorated with 504 Buddha statues and 2,672 relief panels that depict daily Buddhist life in Java. It’s a step-style pyramid with six square bases leading up to three circular layers and a large main stupa.

Around the circular platforms are 72 openwork stupas, each containing a statue of the Buddha.

The Restoration of Borobudur into a UNESCO site 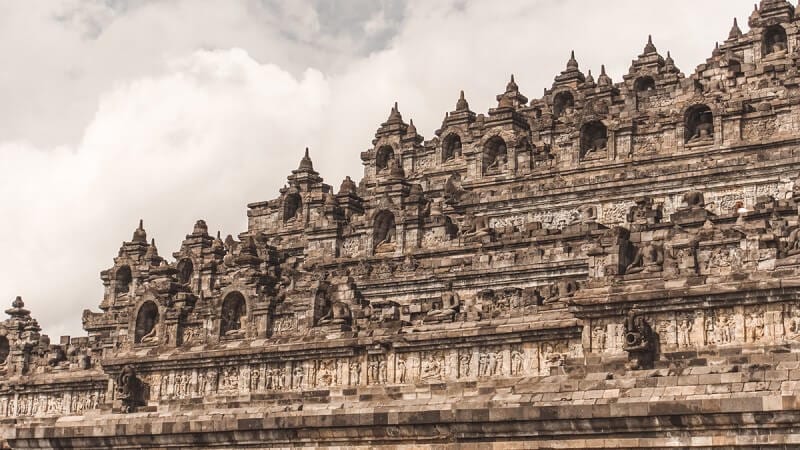 In the 1970’s, a massive restoration project began to restore the ancient temple to its former glory and make it one of the world’s most valued treasures.

The restoration cost twenty-five million dollars, had the support of UNESCO and professionals from 27 countries, and took eight years of labor to finish.

Over one million stones were moved and set aside to be identified, catalogued, cleaned and treated for preservation and put back in its place. It set the standard for future preservation efforts around the world.

Restoration and preservation continues through traditional Javanese methods to repair and replace the many damaged sculptures, including more than a few headless Buddhas.

Borobudur is a protected UNESCO site.

With an abundance of human footprints, proximity to a few active volcanoes, and location in an area used to some intense shaking earth, it’s quite the effort to maintain its beauty, but conservation is intent on it.

Visiting Borobudur and its beauty 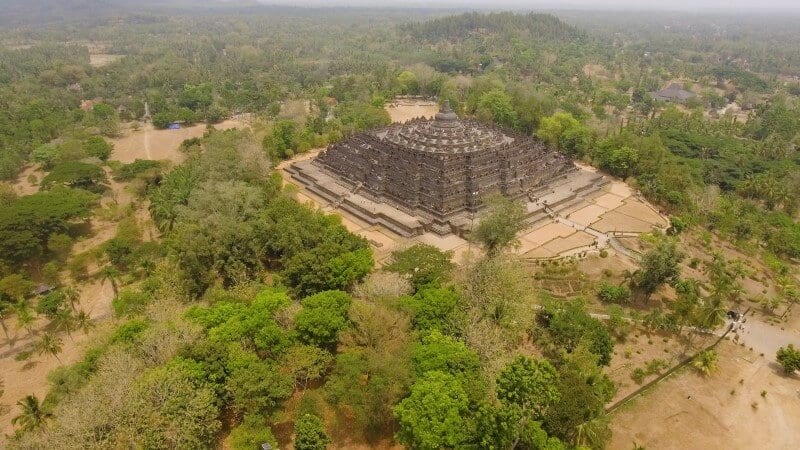 The Borobudur Temple complex is now the single most visited site in Indonesia and one of the most amazing things to do in Indonesia.

Not only is the temple and its intricate designs something to marvel at but the surrounding jungle landscape will press upon you a presence of divinity.


The world’s largest Buddhist temple is made up of five large square terraces, with three circular platforms on top of them, and then a magnificent stupa at the very top.

You start at the base of the temple and follow a guided path around the square terraces and circular platforms taking in thee relief panels and statues of Buddha as you pass to eventually reaching the magnificent stupa at the top.

It’s the path of the pilgrim helping you to feel closer to the Gods as you rise towards the heavens!

It’s a time to contemplate the world of form, your attachment to it, and the gradual release from that to one that embraces a life without form, or oneness with divinity.

And don’t forget to look back at those views, they will be heavenly. 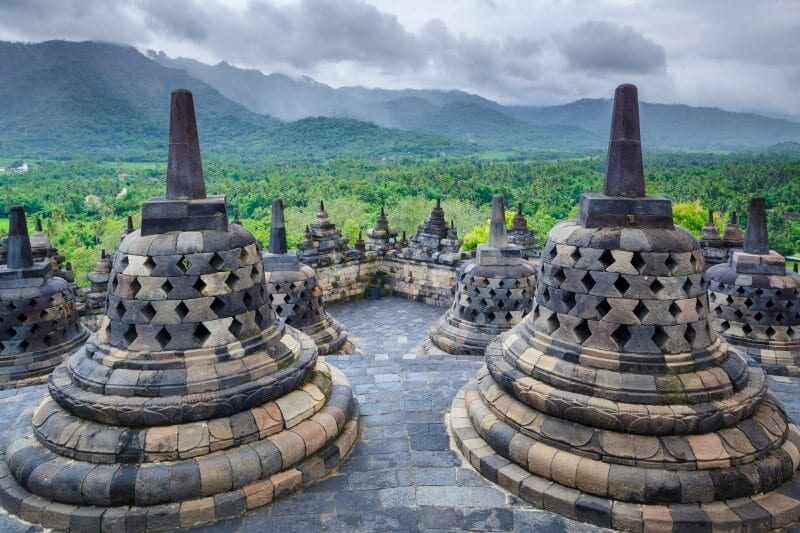 I only wish I could visit again now that I am a highly spiritual person with a deeper connection to mysticism.

I can only imagine how elevated I would feel meditating at Borobudur and absorbing the ancient wisdom.

Give yourself time when you visit to walk slowly and take in the essence of this spiritual place. It’s worth it and if you move too fast with all that steep climbing, you’ll get tired pretty quick!!

Back when I visited, we were encouraged to reach inside the stupa and rub the Buddha for good luck. Now I know better.

The bottom part of the stupa has become soft and it lost its original shape due to being touched repeatedly by tourists. So please refrain and help preserve one of the wonders of the world.

Say a silent prayer to the Buddha asking for good luck instead. I’m pretty sure he will grant it to you and much prefer that than a belly rub.

After seeing this photo, I am immensely disappointed, I did not visit Borobudur for sunrise. Look how quiet, still, and spiritual it feels.

Writing this post has created a longing for me to return to this place. My travel life lately has been missing ancient wonders.

I can feel what I felt all those years ago – the recognition that my life will never be the same and this was all I wanted my life to be.

Sunrise is ultimate time to visit Borobudur and see it peeking out from behind Mt Merapi. Fees will be slightly higher though.

The temple is open to public from 6:00 AM to 5:00 PM. It’s best to visit in the morning to escape the Indonesian heat! You are near the equator here and it is intense.

For more information to plan your trip to #WonderfulIndonesia, visit www.Indonesia.travel. 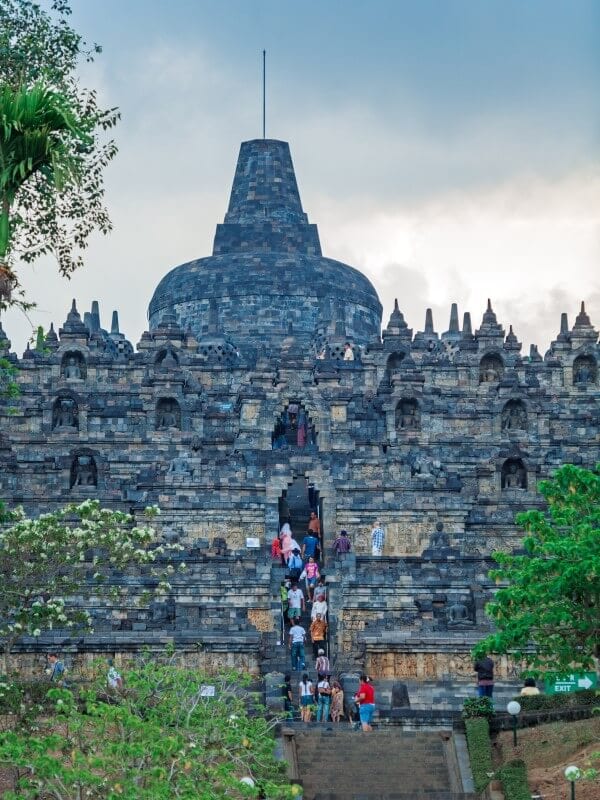 I think visiting the temple with a guide will be the best way to experience Borobudur so you can get a deeper insight to its significance.

Here are a couple of options:

How to Get to Borobudur Temple Indonesia

Borobudur sits in an area between two twin volcanoes, is Sundoro-Sumbing and Merbabu-Merapi, and two rivers, the Progo and the Elo on the island of Java.

This area has been dubbed the “Garden of Java” and is known as a sacred place.

If you enjoy contemplating the mysteries of ancient structures it was found that the three Buddhist temples in the region, Borobudur, Pawon and Mendut, are positioned along a straight line.

Borobudur is only one hour’s drive from Yogyakarta. The easiest way to get there is by joining a tour or renting a car or taxi. Once there it is easy to explore by foot.

The cheapest but least convenient way is to go by public bus. They depart from Jombor terminal in the north of Yogyakarta, and take approx. 90 minutes.

Do your reearch though as the first bus may not leave earlier enough to get you there in time for sunrise. I suggest you stay near Borobudur in that case – see below!

In the tourist areas of Yogyakarta, you’ll find minivan transfers to Borobudur.

Where to Stay near Borobudur Temple Java

My recommendation is to stay near Borobudur Temple.

It is beautiful countryside and will only enhance your stay AND make a visit much easier, especially if you want to visit for sunrise.

There are plenty of rural homestays, guesthouses and hotels in the area:

I wont go into detail for things to do in Yogyakarta as I can’t remember too much. I do know I really loved the city and area, especially for its temples.

It felt very ancient to me and again helped me feel connected to something mysterious, which back then I had no idea how to explain or what it was. It reminds me of Ayutthaya in Thailand.

Yogyakarta a very important city of Java, what they call the cradle of civilization. It was the seat of power that produced the magnificent temples of Borobudur and Prambanan in the 8th and 9th century and the new powerful Mataram kingdom of the 16th and 17th century.

So I’d recommend adding time to your trip to explore this ancient city. And I highly recommend you visit Prambanan, another exquisite ancient temple in Java.

Oh I also think it is the coolest name and still love saying it. It is pronounced Jogjakarta. Just another thing that mesmerized me at the beginning of my travels – things are never quite as they seem and languages differences are delightful.

Check out Accommodation Options in Yogyakarta.

You may be interested in these tours that combine Borobodur.

After 22 years of travel that has taken me to some of the most spectacular sites and amazing experiences through 52 countries, sunrise over Mt Bromo remains in my top 5 experiences, if not my favorite experience ever.

Can you imagine experiencing that after just a month of backpacking?

No wonder I have been doing this for so long with no intention of stopping.

For more information to plan your trip to #WonderfulIndonesia, visit www.Indonesia.travel.