Have you ever been to Wilsons Promontory National Park?

Have you even heard of it? What about Squeaky Beach, have you heard of that before?

Me either until 6 months ago.

After spending just three days there at the beginning of this year, I must have said a hundred times,

“I can’t believe I’ve only just recently heard of this place.”

In case you’re wondering, Wilsons Promontory National Park, or Wilsons Prom, or Prom Country as the locals like to call it, is only a 3 hour drive from Melbourne.

When you first drive in to Prom Country you see this: 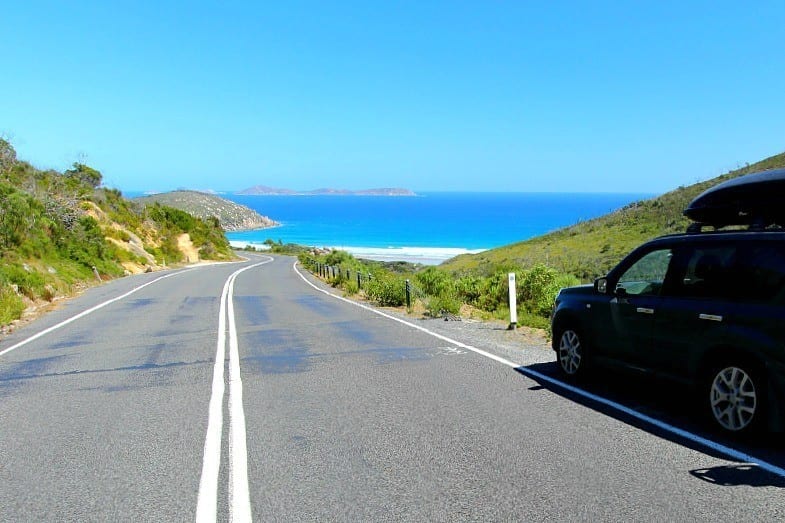 Not bad on the eyes, huh?

Wilsons Prom is not just a blip on the map. It’s a 50,000 hectare coastal wilderness area in Victoria and so popular that they have a ballet system to stay in the accommodation. Popular like Super Bowl popular.

But why haven’t I, or almost everyone else I’ve spoken to from NSW and other states out of Victoria, been there or heard of it?

For one, Tourism Victoria doesn’t do a great job at promoting their state. That’s evidenced by the fact that we only planned on being in Victoria for one month because we thought the state would be boring besides Melbourne, the Great Ocean Road, and possibly Phillip Island.

And then we thought Phillip Island was all about the fairy penguins. 8 days later we were still there enjoying the island vibe.

Turns out Victoria is friggin AWESOME and we ended up being there for 3 months!

It was that good we issued an online apology, mostly directed towards our Victorian mate Mick who we’ve put shit on for many years, dismissing Victoria as just that boring south-east corner of our country.

The more I think about it, the more amazed I am that I’ve not heard of Wilsons Prom or Squeaky Beach. Considering I’ve traveled a lot in Australia, extensively overseas, and I’ve been online in the travel space with this blog and social media constantly over the past four years.

Apparently, the tourism budget is low in Vic, and most of the marketing budget goes to promoting the Great Ocean Road to overseas markets. I’m not pointing the finger directly at Tourism Vic, they have their hands tied to some degree. It’s Federal and State Government who keep cutting budgets and taking away staff from important sectors of our economy. But that’s another story.

But then maybe the Victorians are also purposely trying to keep it a secret?!

“I’m telling everyone about this joint”.

I think I said that about twenty times with each new corner we turned on the drive through Prom Country.

Stunning vistas of pink granite boulder mountains, turquoise water, and squeaky-white sand opened up before us.

Thinking back, the first time we got inspired to visit Wilsons Prom was because of our friend Jay from Victoria, and a few other friendly Victorians we met emphatically declaring Prom Country their favourite place in Victoria, if not Australia.

I didn’t believe them. I figured it would probably be good, but not exceptional.

Squeaky Beach is just as good as the other Australian highlights often spoken about; yes, it’s up there with places like Wineglass Bay and Whitehaven Beach.

It is pristine, mind blowing goodness.

The only downer was stupidly not charging the battery in my camera the night before, so was left taking photos on my Samsung Galaxy4. Argh! 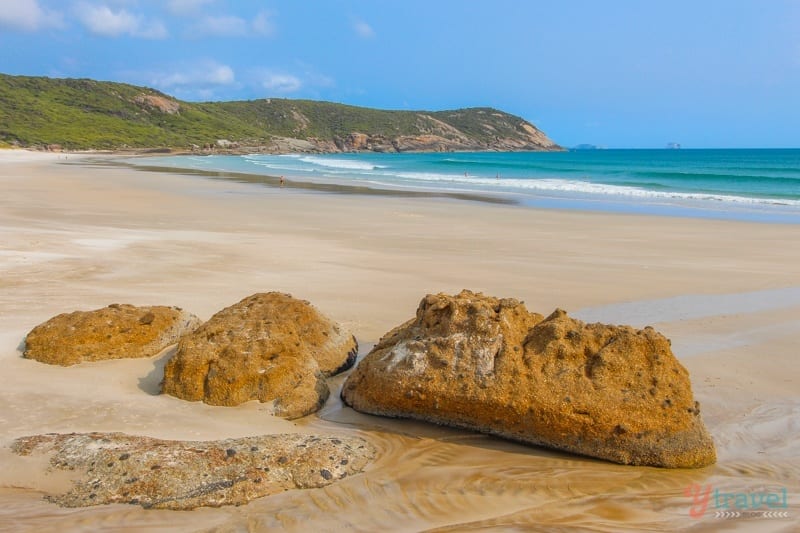 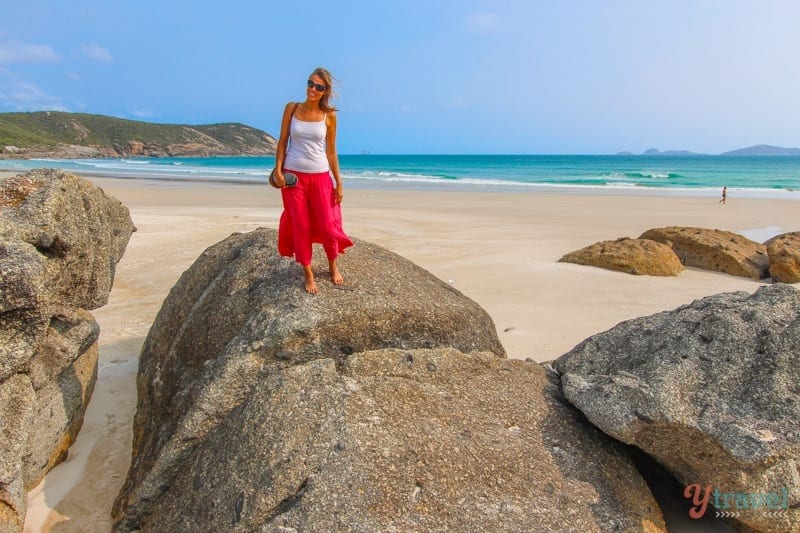 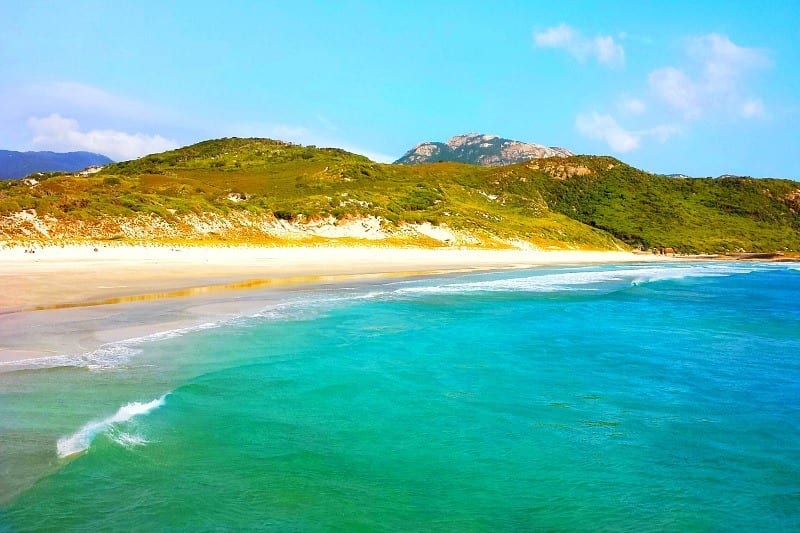 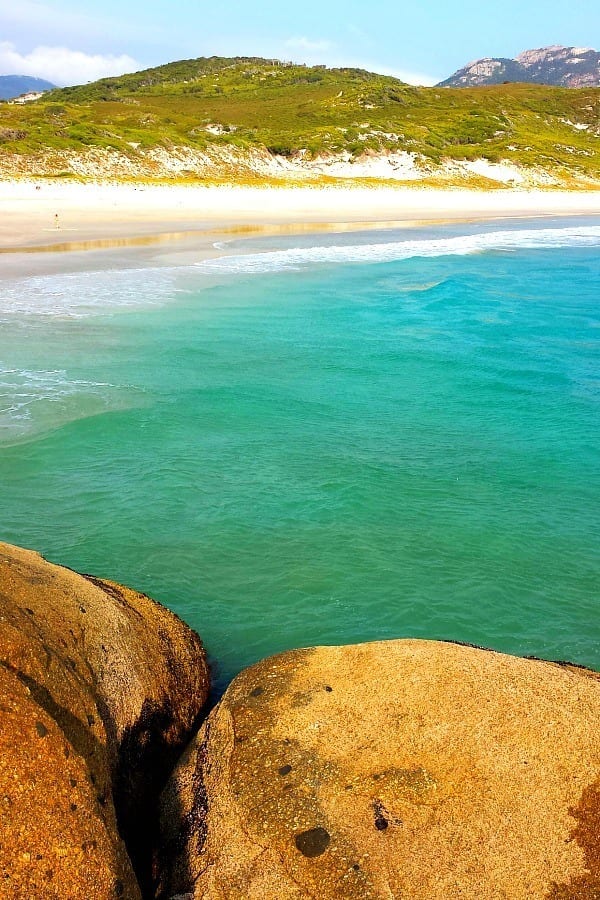 I could have sat on these rocks all day and just watched the waves roll in. 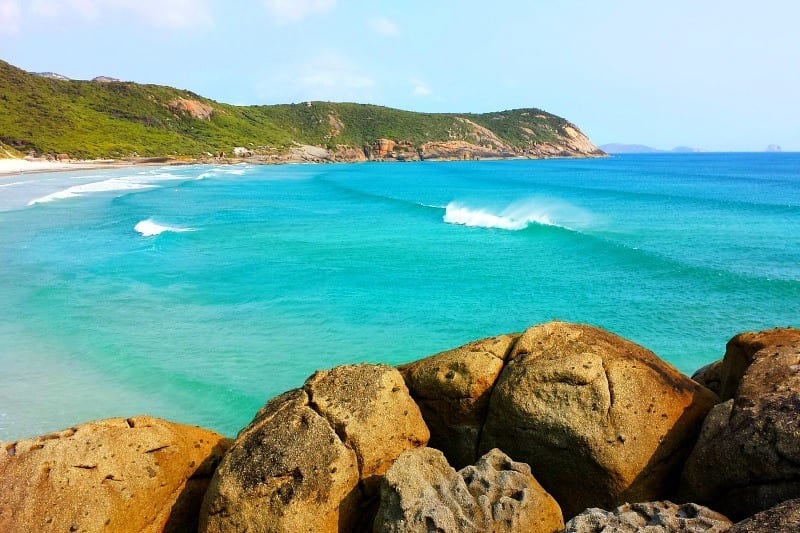 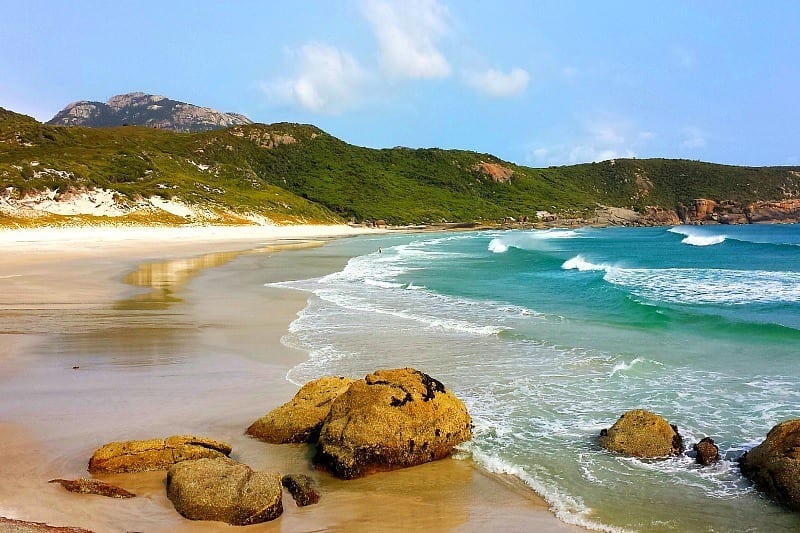 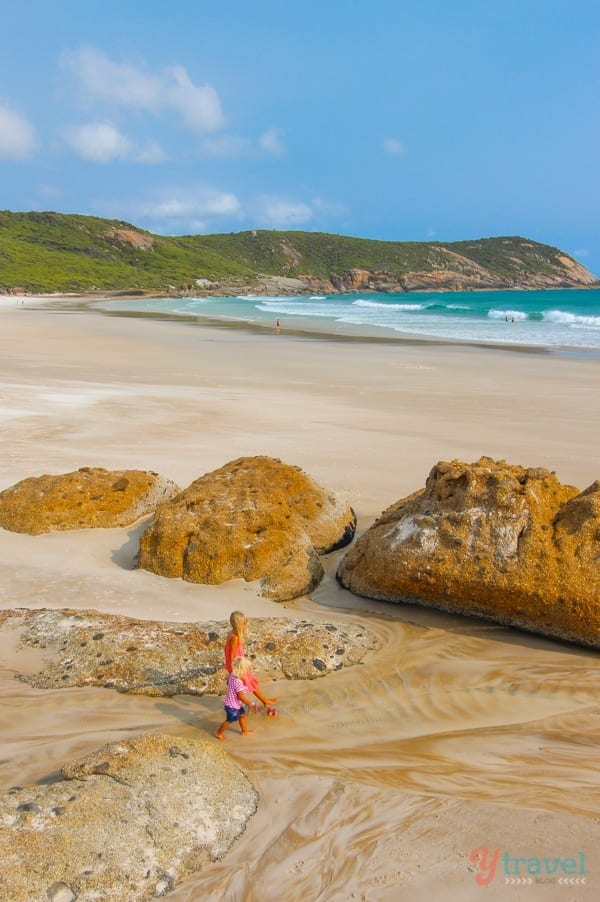 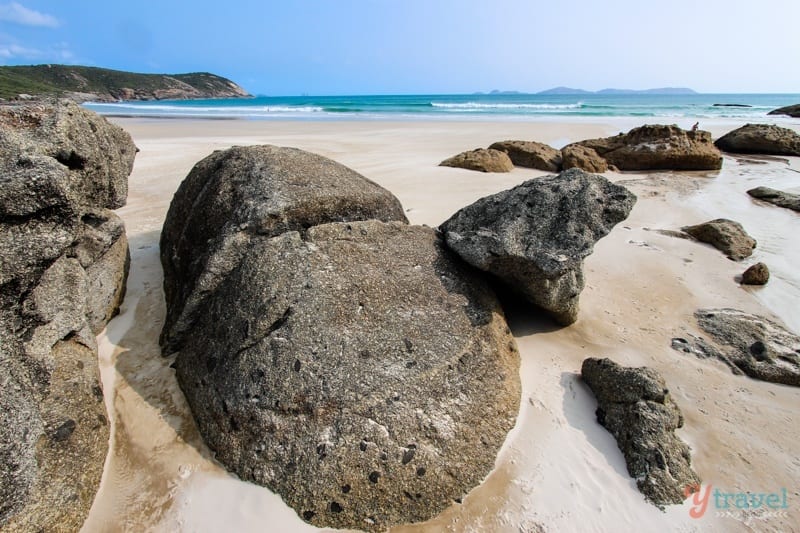 We were super-annoyed that we didn’t plan better and book ahead for accommodation. We just turned up expecting to get a camp site and pitch our tent.

But with Wilsons Prom being popular with Victorians we had no chance of getting a powered tent site. With our business being online – and its daily deadlines – we need power!

We managed to find a solution and stayed in a cute little cabin at Tidal River Campground for 3 nights. There had been a mistake with the booking system and someone changed cabins, allowing a vacancy to suddenly appear.

Considering our only other option was to stay one hour outside the park, we jumped on it. But then things got even better!

Because it was late afternoon and the people had just moved out of the cabin, the cleaners had already gone home. At first they weren’t going to let us sleep in it the first night because it hadn’t been cleaned, but I said “how dirty is it? I’ll clean it myself!”

They ended up saying, you know what, because it hasn’t been cleaned, if you’re still willing to stay in it, we won’t charge you for the first night. SWEET! 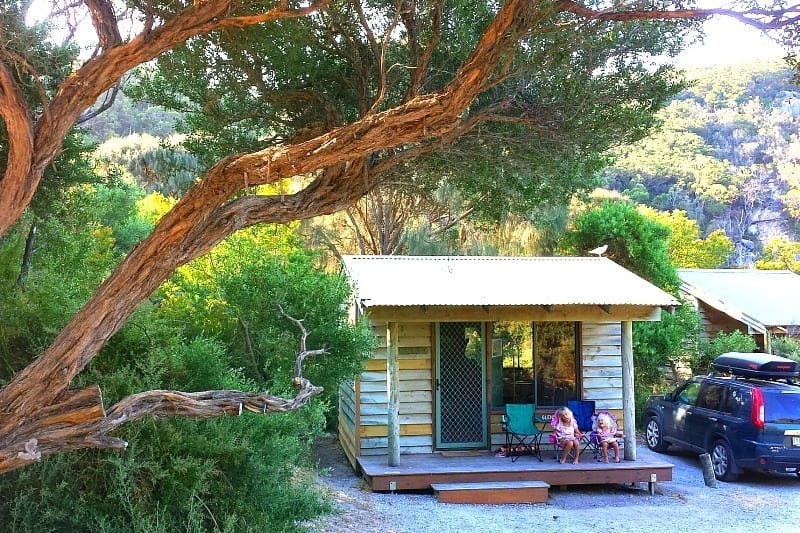 When we opened the door, it was like nobody had even been in there. Winning!

And then this happened: 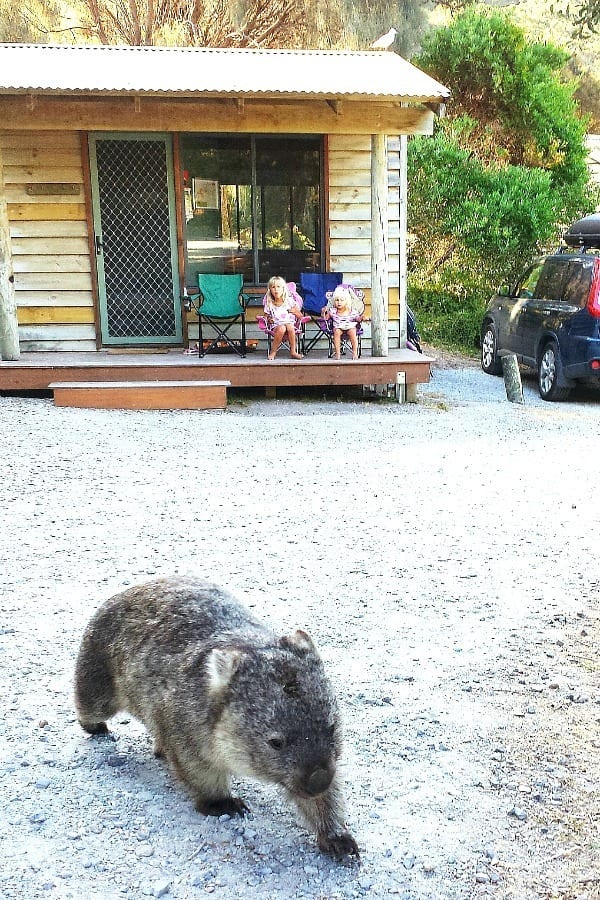 I was sitting on the little deck having a beer whilst the kids played and then this wombat just leisurely walked by. The kids were beside themselves. Wilsons Prom is a great place to see wombats in the wild.

After 3 days of soaking up the magical scenery of Squeaky Beach and Norman Beach (just a 300m walk from our cabin), we dragged ourselves out of there with the intention to return one day to do it properly. 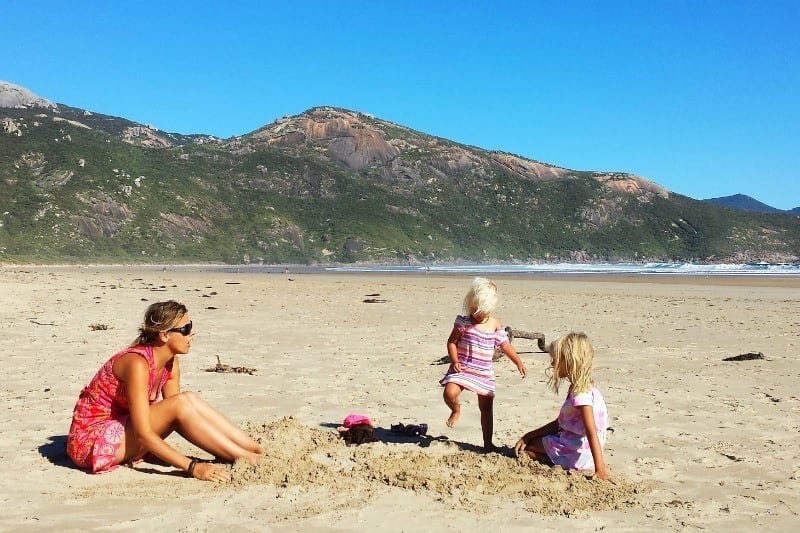 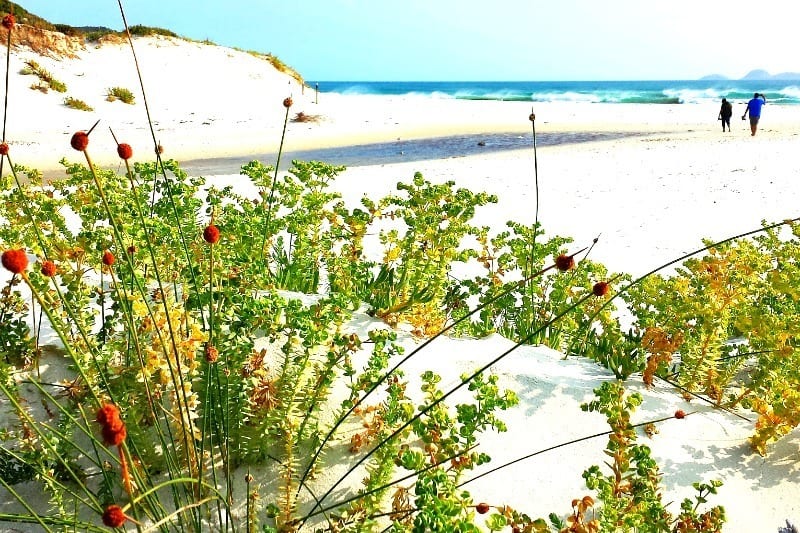 Wilsons Prom offers many great walks, for all different fitness levels. We enjoyed a walk around to the point from the campsite, with views over Norman and Squeaky Beach. 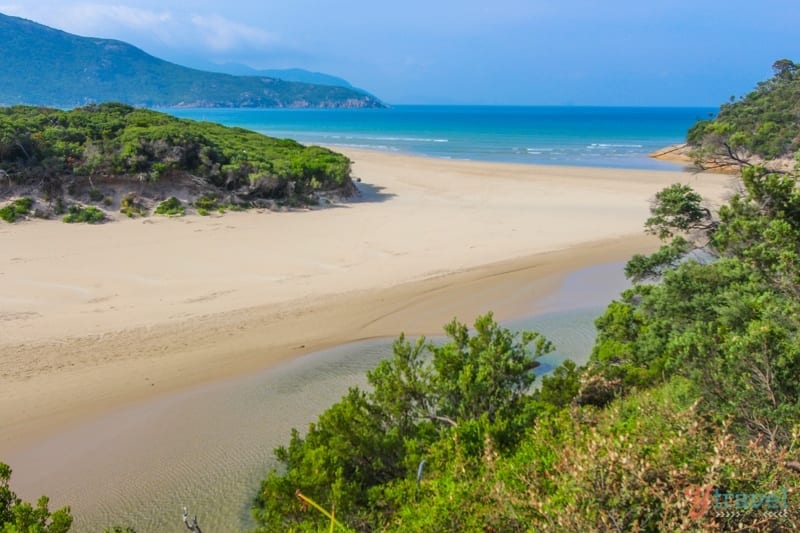 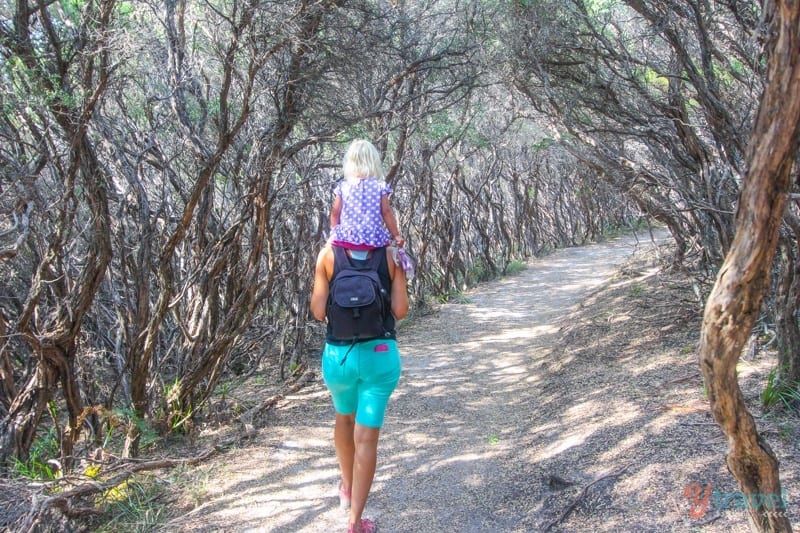 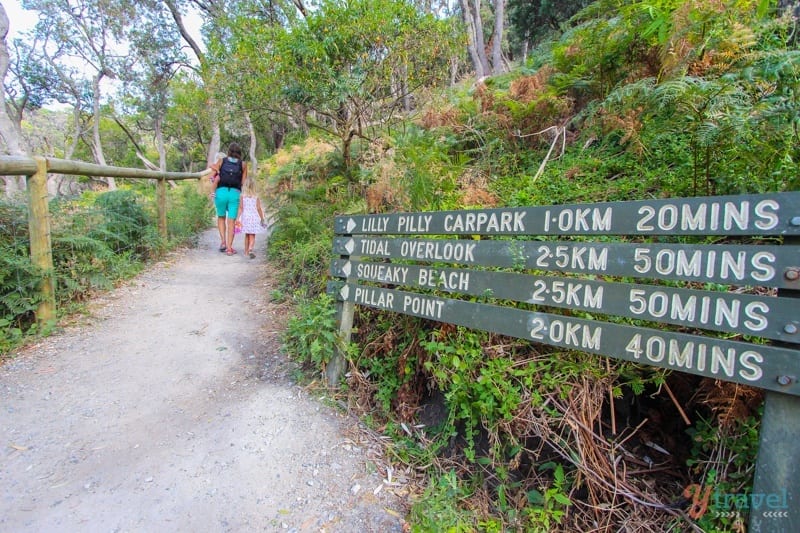 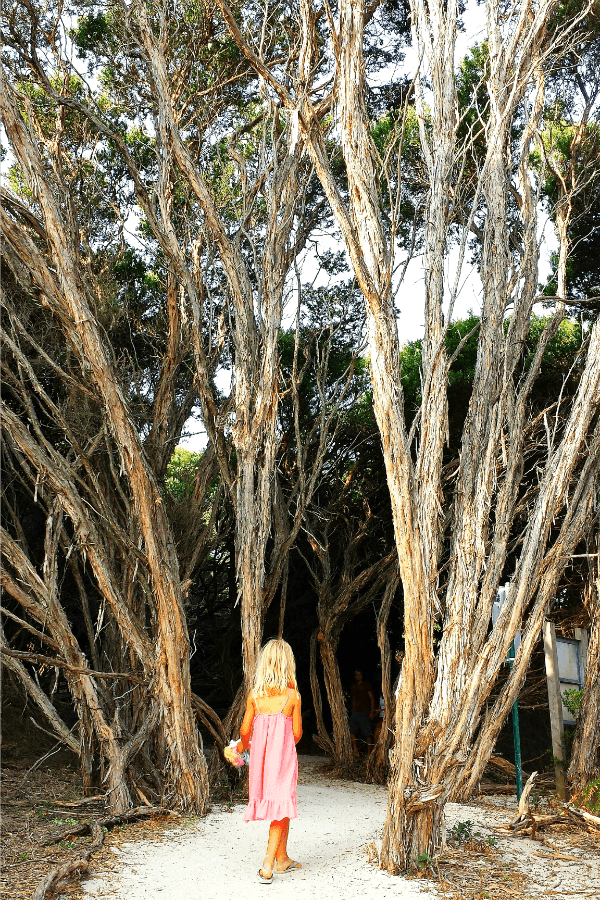 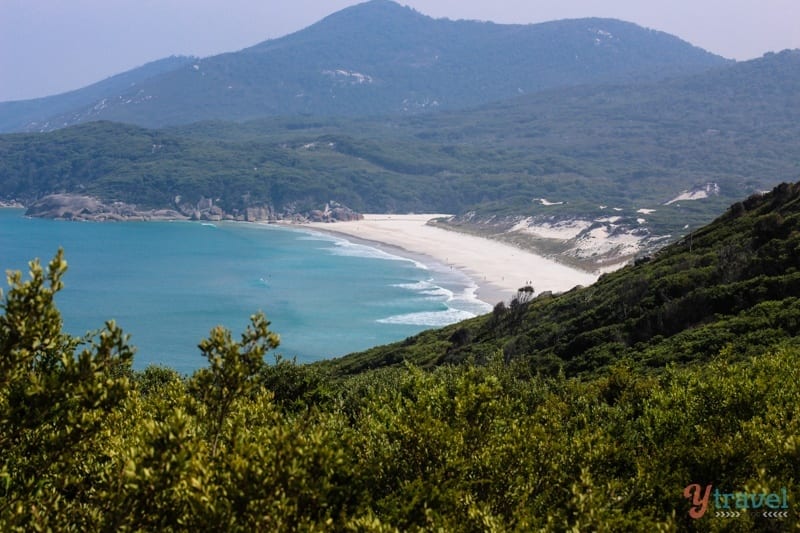 There are plenty of beautiful beaches to choose from – many with waves, and picnic spots for a little relaxation.

For the adventurous, there are all-day or overnight hikes to beaches on the east coast of the peninsula – said to be where the true magic lies.

I’ve made the intention to let more people know about this beautiful part of Australia. It’s a sin that it hasn’t been shared more.

30 thoughts on “Why have we not heard of Wilsons Promontory National Park?”