X marks the spot. Two of them. One for the first shot. The second for the fatal shot.

It hits you as soon as you stare out of the window on the sixth floor of the former Texas School Book Depository building facing Dealey Plaza in Dallas.

A President died on that spot. A President was allegedly shot from where I am standing. He was a good President. 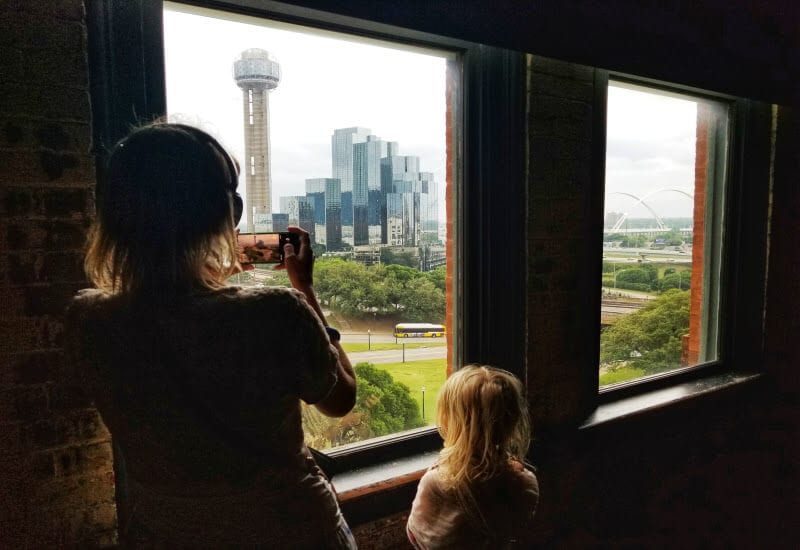 A young, vibrant, charismatic war hero with new ideas and energy for positive change and an exceptional talent for expressing those ideas and inspiring people.

We had learned a few things about John F Kennedy before we reached that spot on the sixth floor.

I never knew he started the Peace Corps. I thought of all those American travelers we met in Africa, the only time we really met Americans traveling back then. They were all on Peace Corps adventures.

If it wasn’t for JFK they wouldn’t have been there.

He initiated polices and change in regards to Medicare, civil rights, and protection of the environment!!

He was a President for social good and change. While I’m sure he was not perfect, as no one is, least of all a President, I think he was a good man.

It was evident by the mourning that happened upon his death and the severity of a very short Presidential term.

There was a Gallup poll asking Americans to assess the last nine presidents from Kennedy forward. In that poll, John Kennedy was the most popular with an 85 percent approval rating.

He was pretty damn handsome too and his wife a picture of elegance, beauty and intelligence.

And on that X spot below me he was killed.

It’s a question that my family have discussed since I was young.

I remember watching several documentaries with my parents. We’d discuss the evidence around the table at family gatherings with my Aunt.

It was the CIA. No. It was the Mob. No it was delusional Lee Harvey Oswald. No he was just a patsy. There was a trained sniper behind the grassy knoll.

And here we were, as my mother said, “Standing in the middle of history.”

We hadn’t planned to visit the JFK Museum in the old Texas Book Depository where Lee Harvey Oswald is said to have shot the President.

We picked up my parents from the airport in the afternoon ready to start our month road trip the following morning.

I wasn’t planning to do much with our one night stay in Dallas with them as I know how brutal that flight from Australia can be and knew they’d be tired.

We decided to go for a short walk from our hotel at the Hyatt Regency to hold off sleep and force the body clock into a changeover.

Curiosity led me to google where JFK was assassinated and it returned that it was around the corner – only a six minute walk.

In fact, our hotel stands out in the skyline from the Sixth Floor Museum alongside Revolution Tower.

We walked to the plaza noting where the motorcade went by and taking time to read the plaque on the wall of the Depository and walked over to the Museum Cafe for a coffee.

We asked about the museum and decided we might as well go and see it while we were here.

Although we only had an hour before they closed, and the audio tour recommends 90 minutes, we decided to dump our too hot coffees and go in anyway for a short version of the tour.

We skipped any of the extra audio commentary and focused on following the main stories and sequences of events. The audio matches large informative display boards so it was easy to quickly follow. 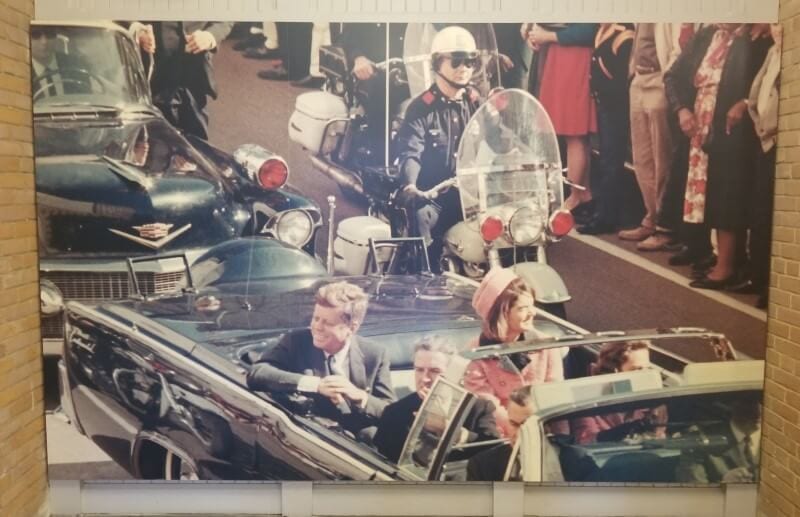 We’re all so glad we decided to dump those coffees and go.

Mum and Dad couldn’t believe they were standing in the place where it happened, looking at those x’s and the rifle that killed JFK.

These are the unexpected joys of travel. I wrote the other day about the joy of planning in advance. There’s also joy in leaving room for surprises.

The tour was fascinating.

Once again to hear the stories and talk over the conspiracy theories.

Just like me at her age, Kalyra walked out with a ton of questions and curiosities. She thoroughly enjoyed the tour. Savannah loved being my shadow and following along with her audio tour. Audio tours are so great for engaging kids! 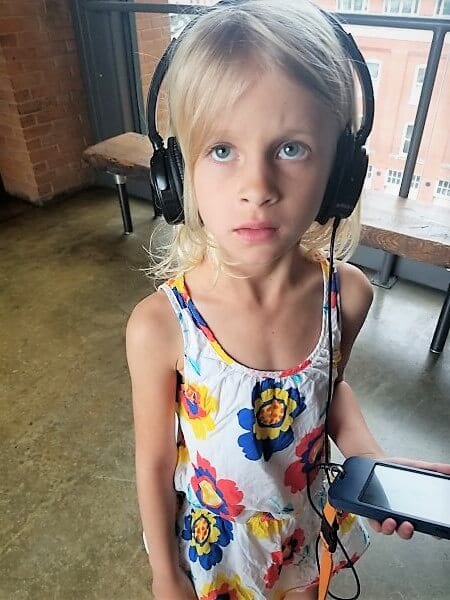 His story reminded me of Obama – charismatic vibrant energy bringing elegance and beauty to the White House with the intention for social change.

JFK came at a time when TV was new and he was able to use that to come to the people. They felt they knew him which helped him get voted in. Obama used Social media to his same advantage.

He spoke to the youth, as did JFK. To their new ideas and thirst for the changes of a generation filled with promise and hope for a better world. At least we had Obama for 8 years.

We ended the day outside the museum standing on the grassy knoll looking out to those crosses on the road contemplating it all. Right here a great man was killed.

A man who did good things in a short lifespan.

As my mother said, “I wonder what America would be like now if JFK wasn’t killed?”

Like a good old game of Clue – how can we find the pieces to the mystery that lie hidden in the small black packet?

It was …. with the rifle behind the grassy knoll?

What goes in your blank?

Here are more posts on things to do in Texas:

Visit Dallas hosted our stay at the Hyatt Regency.

Who do you think killed JFK? What unexpected surprises have you stumbled upon on your travels?

5 thoughts on “The Grassy Knoll Mystery: A visit to the JFK Museum Dallas”