Thinking of traveling to Cuba?

Then think of crystal blue waters of the Caribbean lapping at pristine shores.

Think of the beat of salsa music and cigar smoke drifting in the air. Think of friendly locals with ready smiles and beautiful baroque architecture lining narrow streets. 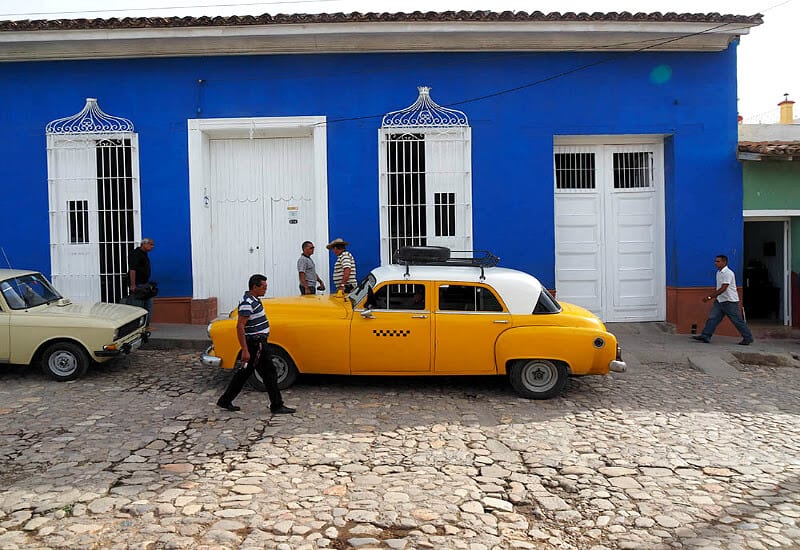 Cuba has the romance Paris would kill for.

But things are changing fast for this politically isolated fledgling tourist spot. Perhaps too fast.

So what effects have these changes made to the country? Is it safe to go to Cuba? And is it still worth visiting Cuba?

We asked Cuba travel tips expert, and founder and owner of the Cuba tours company Cuban Adventures, John Ahrens about what it’s like to visit Cuba now.

A Brief History of US Tourism in Cuba

Cuba has seen an enormous amount of change happen over the past few years. And considering prior to 2014, Cuba had been forced into a time warp since the 1950s, these changes will have been momentous.

In 2014, President Obama – the first US president to visit Havana since Coolidge in 1928 – loosened restrictions on traveling to Cuba and trade between America and Cuba.

Obama didn’t remove the embargo completely, but the changes he made had an instant impact on Cuba and the travel community at large.

Talk of mass tourism, chain restaurants, globalization and the spoiling of the Cuban culture have created a lot of uncertainty for those that want to visit Cuba.

And concerns over President Trump’s movements to reverse travel restrictions – not to mention Hurricane Irma’s devastating run – have also dampened people’s urge to go there.

10 changes you should know about traveling to Cuba 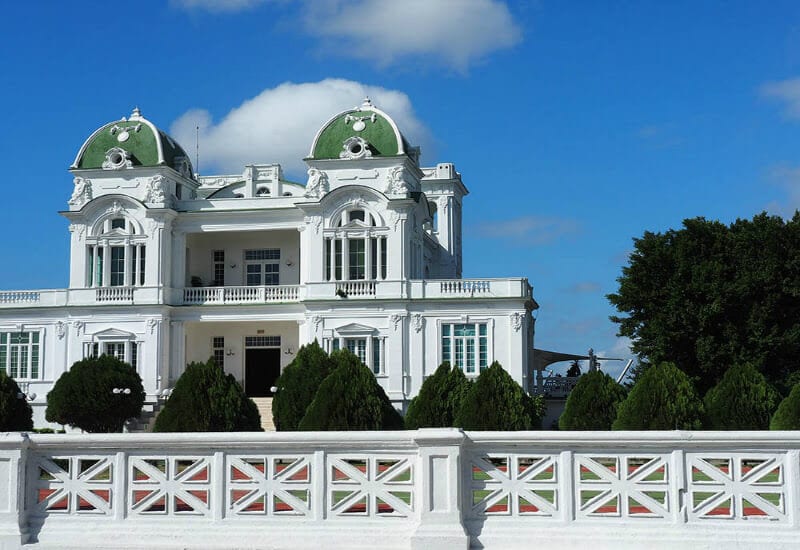 1. What Can American Travelers Do?

Prior to 2014, it was very unusual to find any visitors from the USA in Cuba. Restrictions on US citizens traveling to Cuba meant that Americans had to be part of educational tours and there were no commercial direct flights to Cuba from USA.

The Obama changes in 2014 made it legal for Americans to travel to Cuba without having to go on an escorted group tour. This led to a surge in American visitors.

By presidential decree, Obama did as much as he could to let Americans take trips to Cuba, and for the 2 countries to trade and coordinate, though he was not able to end the trade embargo itself, which is written into the Constitution.

2. How Many Tourists are Visiting Cuba Now? 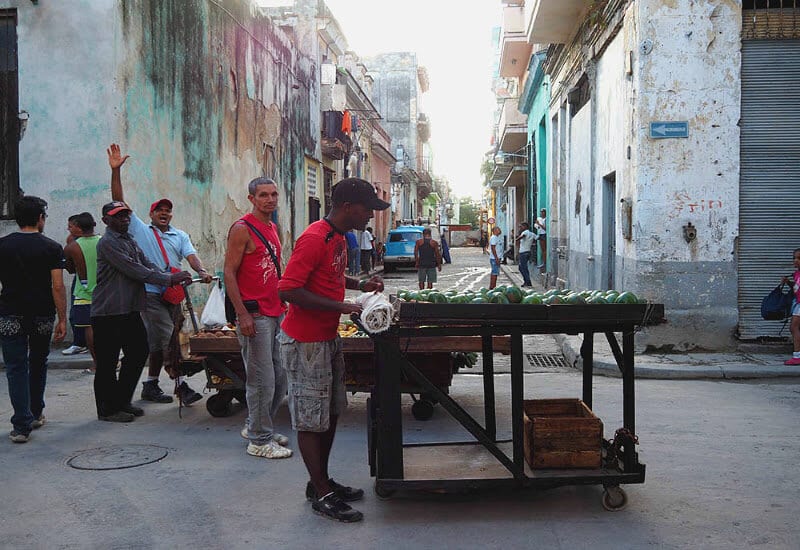 Obama’s changes to travel restrictions mean that US citizens being allowed to come into Cuba easier and because of this, travelers from other countries have seen Cuba as a viable travel destination too.

The effect of this was a large increase in tourist numbers in 2016. The figures I’ve seen mentioned are an increase between 25% to 30%, which was on top of a similar increase in 2015.

This may not sound like a lot but, during peak holiday periods, Cuban infrastructure couldn’t keep up. There were not enough beds for all the visitors.

How to have a memorable 4 day weekend in Cuba

3. Is There Enough Accommodation in Cuba? 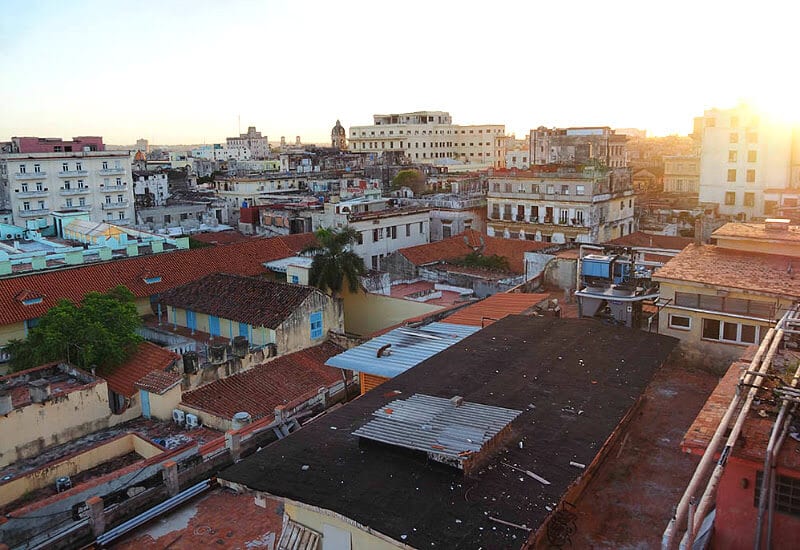 Unless you know what you’re doing, finding accommodation in Cuba independently can be quite tricky and even more so now with so many people visiting.

Independent tourists were forced to sleep in the public squares of popular towns such as Trinidad and Vinales, and Cubans, ever the improvisors, were renting out the back seats of their parked vintage Chevys for $10 a night.

4. What New Accommodation Options Are There For Tourists?

Hotels in Cuba had a reputation for often being expensive and poorly maintained.

However, locals are allowed by government licence to house visitors in their homes called casa which is a wonderful way to see the real Cuba.

Many more families have built an extra room in their home and licensed their house as a guesthouse for tourists to stay in.

In some popular Cuba destinations such as Vinales, where the original town is quite small in size, nearly every house is a licensed guesthouse for tourists.

In the centre of Vinales, it’s actually hard to find a house these days that is not a guesthouse.

Many guesthouses that already existed have added extra rooms. Some guesthouses now have up to 12 rooms for tourists (much like a mini hotel), which is something that was hard to imagine just a few years ago.

The Cuban government has built more hotels and given out contracts to large foreign hotel groups to build and manage new hotels, such as the impressive Manzana Kempinski on Havana Central Square.

Book Hotels in Cuba on Booking.com 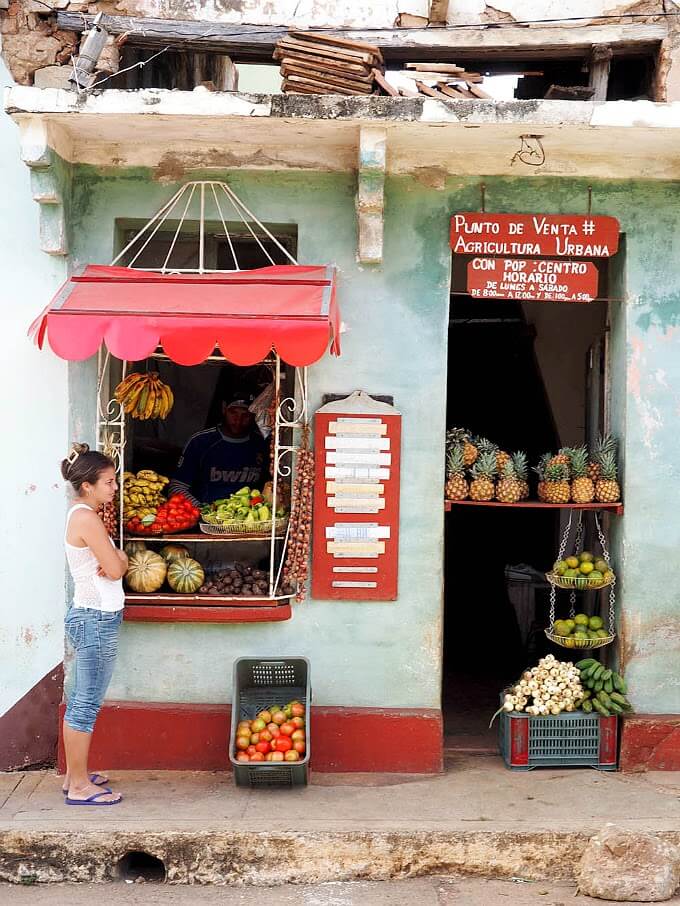 The rise in numbers traveling to Cuba aren’t all from America – but this could have a contributing factor in why all the world wants to see Cuba now.

Visitors from other countries increased as well. The motive for them being able to see Cuba before laws further relax meaning even more Americans would flood the island, changing it forever.

6. What Should You Say at US customs?

One of the biggest concerns about how to travel to Cuba from USA is getting back into the States after a trip to Cuba. Leaving America isn’t a problem and providing you know what to say when you’re coming back in, you’ll be fine.

At Cuban Adventures, we get our US travelers to report their experience to us when returning to the US and passing through immigration. So far, none of them have reported having their paperwork checked.

The harshest interrogation was “what were you doing in Cuba”, and providing the answer “people-to-people tourism” was enough to get waved through.

One client reported to us that when she answered “people-to-people-educational”, the official replied with a very friendly “that`s the right answer”.

7. Can You Still Find ‘THE REAL CUBA’ if You Visit Now? 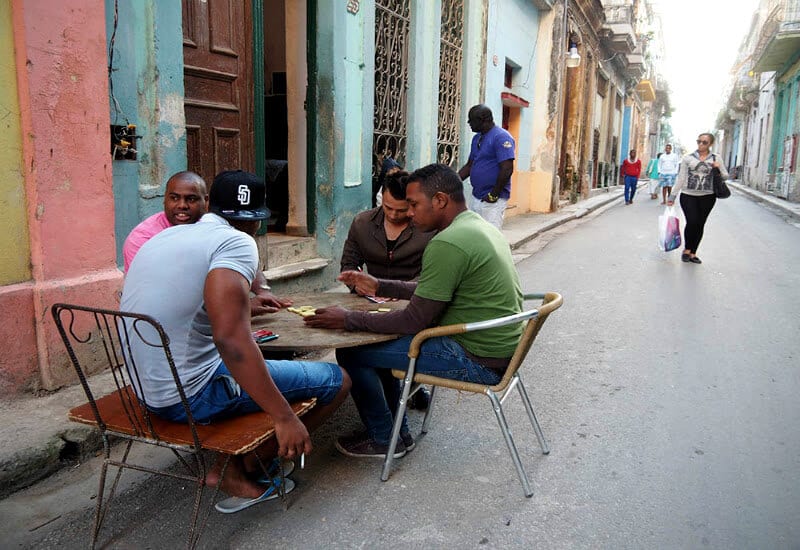 These changes to travel into Cuba have had a positive effect not only on incoming tourism but also on the locals too. Private business ventures are popping up everywhere, especially in the most popular places to visit in Cuba.

What’s great about that is that these are all small-scale private businesses run by the local Cubans themselves, and owned by individuals and families.

So if you’re visiting Cuba now, with the exception of spending time at a beach resort, you are very much in contact with authentic Cuban culture and society for the entirety of your visit.

These freedoms and increased income opportunities mean that Cubans are also happier and more relaxed.

Is it safe to travel to Cuba? You can still see the odd hustler in the streets in Old Havana, but those sorts of encounters are now much less frequent.

8. What Are the Biggest Challenges for Visitors to Cuba? 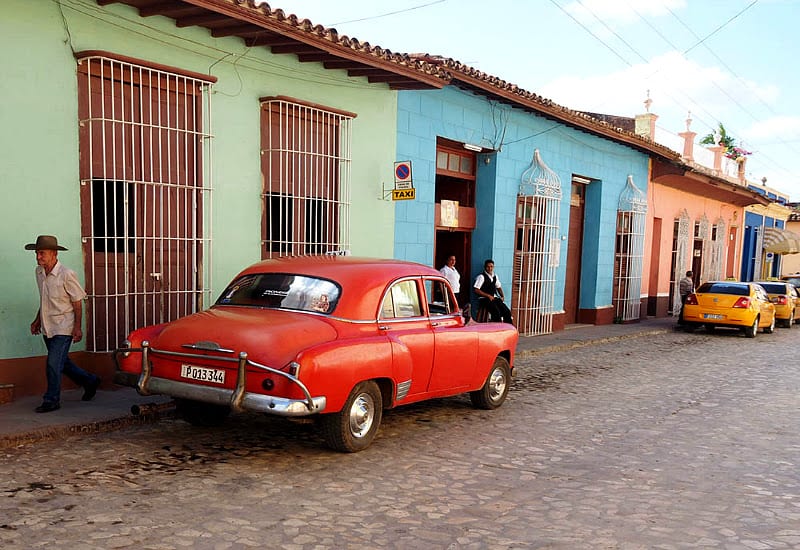 Make no mistake, Cuba is still a challenging place to explore.

Infrastructure is still poorly equipped to accommodate so many visitors and – in spite of it seeming like a developed country – there are still many parts to Cuban life that are stuck in the past.

Internet access is still difficult, however I would say the biggest challenge for travelers is getting access to their money.

You can’t pay for things with credit cards in Cuba. You have to pay in cash in Cuban Convertible Pesos (CUC).

Other banks simply take the extra precaution of not having their cards work in Cuba even though they are not American banks.

However, this situation is better than it was before.

In 2015, Mastercard allowed its cards to work in Cuba, but some banks still block transactions from their clients trying to use Mastercards there.

On June 16, 2017, Trump announced that he was going to roll back all the regulation changes that Obama had made.

He gave his administration until September 16 to confirm all the details, but as yet nothing has been put in place and no details have been confirmed.

So independent US travelers, for the moment, can still legally visit Cuba, and no travel to Cuba restrictions have actually changed.

However, the effect of this announcement has created a lot of fear and uncertainty, and many travelers are putting off traveling to Cuba until they know what the rules are going to be.

Trump’s announcement made it clear that it was still going to be legal for US travelers to go on an escorted people-to-people group tour. We run these Cuba tours, however even the sales of these tours have dropped off.

10. Has Cuba Recovered from Hurricane Irma?

Hurricane Irma destroyed many coastal areas around the Caribbean.

Raging right along the northern reaches of Cuba from west to east, Irma threatened much of the most populated areas of the island.

Everything in Cuba is back to normal except for some of the badly damaged beach resort hotels on the north keys in the central part of Cuba, such as Cayo Coco, Cayo Santa Maria, and Cayo Guillermo.

Big waves and storm surge caused flooding to low lying areas near the coast in Havana, such as Central Havana and some areas of Vedado, especially along the River Almendares.

Cuban authorities reported that 10 people died, 7 of which were in Havana.

Locals who live in those areas that were flooded suffered material losses and water damage to their properties. But since then all of our tours are running as normal.

How to Travel to Cuba – Independent or Group Travel? 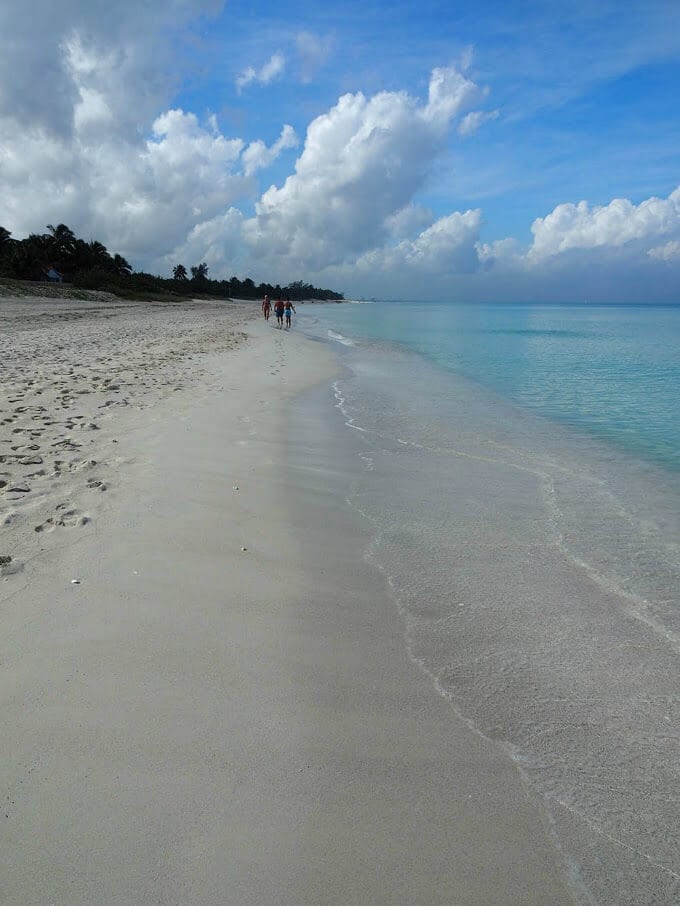 The changes happening to Cuba and its tourism are making the country more accessible and easier to travel to.

But just because it’s easier now to go traveling to Cuba doesn’t make it an easy destination. Cuba has always been one of those surprisingly tricky places for solo travel.

And now with more visitors, uncertainty with accommodation, and inadequate infrastructure for the level of tourism… in my book this spells stress and wasted time for the self-guided traveler.

If you’ve got limited time, I would be more inclined than ever to book with an ethically minded small-group tour company like Cuban Adventures.

This is how we traveled in Cuba pre-Obama changes and it was the right decision.

The experience showed us the Cuba we never thought we’d get to see and taught us more than we’d have learned on our own.

The best time to go to Cuba is now!

But by the sound of things, if you are thinking of going to Cuba you’d better get in quick. Things are changing round here fast.

Want to know more about these changes in Cuba? See more details on MrAndMrsRomance.com

Jim is one half of MrAndMrsRomance.com, a lifestyle blog he writes with his wife Christina that explores the romance of travel, food, drink and having fun. Jim is a freelance writer and copywriter, and has appeared on television to speak about his travel experiences. Together, Mr & Mrs Romance love discovering the secret spots only locals know about here in Australia and internationally. Follow Mr & Mrs Romance on Facebook, Twitter and Instagram.