This post is by Ayngelina from Bacon is Magic

As travelers we want to experience all that we can from a country.

When you ask people how their impression of a place one of the first things they will talk about is the food.

And the foundation of any strong culinary heritage is street food.

Billions of people around the world eat street food, but in North America our over santized culture has been taught that it’s bad to eat street food.

It can be a very polarizing topic as some travelers are afraid that it is dirty, food that will make them sick and others see it as a badge of authenticity.

I have had some amazing meals in my life but the most memorable food experiences have been from street vendors: crickets in Mexico, bun cha in Vietnam, ceviche in peru.

In fact the first memory of a country tends to be something delicious I ate there.

You don’t have to be Anthony Bourdain and try the dodgiest food around the world but you do need to eat street food. Here are the most obvious reasons for eating street food that you have probably read before:

Safety: Food made with the freshest ingredients are made in front of you. If you don’t see them cook it you don’t need to eat it. 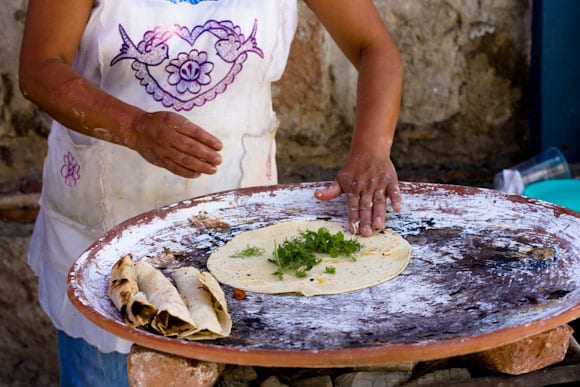 Price: It doesn’t get much cheaper than street food and it’s saves many backpackers on a budget.

Culinary Authenticity: The food isn’t dumbed down like in hotel restaurants, it’s what the people actually eat.

Interaction with Locals: Typically you’re sitting on a low-slung plastic stool, seated around a communal table. The closeness of street food encourages conversation.

If you’re traveling alone it’s a great way to strike up a conversation with your dinner companions and make new friends.

These are all really great reasons to eat street food.

But guess what? They are completely selfish and only benefit the traveler. What about the host country? What do they get out of it? Here is the real reason you should eat street food.

It contributes to local economy

Small businesses build a country’s economy. When you give money to the woman selling empanadas you’re supporting her family, the family of the farmer she bought the ingredients from and everyone in between that picked, shipped and sold the food.

Instead of making faceless foreign multinational hotel conglomerates richer you can meet the people you directly affect.

These are local entrepreneurs who want to make a better life for themselves and are prepared to work hard to support their families. It’s not simply meat on a stick, it builds a better life and in turn, creates a stronger community.

You may look at that transportable stand and think it’s such a small act how can it make a difference? Do not underestimate the overall economic implications of street food. If you combine the efforts globally millions of dollars are exchanged each day.

The impact on local agricultural production is in many cases immense. Local farmers can sell produce locally rather than using pesticides and picking early to ensure they can export it. This is the ultimate form of the local food movement.

So as you spend a vacation hiking mountains, sunbathing on the beaches and drinking the local beer, don’t forget to stop by the stand on the corner because it’s one way to ensure you’re giving back to the country you’re enjoying.

What is your favourite street food?

About the author: Ayngelina left a great job, boyfriend, apartment and friends to find inspiration in Latin America. Read about her adventures at Bacon is Magic and connect with her on Facebook and Twitter.

35 thoughts on “The Real Reason You Should Eat Street Food”