Australia has way more to offer than lazing on beaches, surfing great waves, and sipping on world-class wine.

Of course, travel in Australia will involve these things and be enjoyable BUT, there is so much adventure to experience as well.

We spent 18 months road tripping around Australia and still only scratched the surface of adventurous outdoor activities.

We’ve partnered with Vision Direct Australia to share their Instagram giveaway (now over) and share the top 5 outdoor activities in Australia we loved the most. (It was very hard to narrow it to five!)

1. The Great Beach Drive from Noosa to Fraser Island 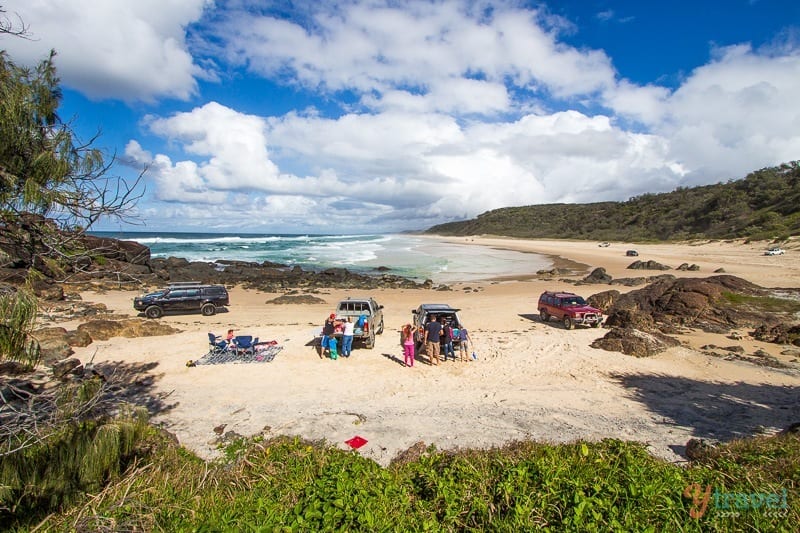 Some of the most spectacular coastline and adventurous fun is the Great Sandy Beach Drive from Noosa to Fraser Island in Queensland.

As if driving on the beach wasn’t fun enough, you can stop at Double Island Point along the way for a hike up to the lighthouse and extraordinary views. We didn’t see any whales or dolphins, but they’re known to visit here often.

Then you drive over the sand dunes inland a bit to reach Rainbow Beach. You can stop for a surf at Double Island Point while here and then cruise along the beach with giant rainbow coloured cliffs looming beside you on one side, and waves rolling in on the other.

To top it off, you could see a few rainbows if the timing is right. We saw so many of them which made me question whether it was called Rainbow Beach because of the rainbows or the coloured sand.

We camped at Inskip Point for a night and enjoyed a horse ride along the beach. From Inskip Point, you can catch the barge over to Fraser Island and let the adventure continue.

Fraser has it all.

Awesome beach driving, whales breaching from shore, dingos coming up to say hi (be very careful of them) beachfront campsites, and the awesome champagne pools – perfect and safe for a refreshing dip, as the ocean is a little sharky.

But, it doesn’t end there.

You can runway down the beach in a small plane to rise above Fraser and glimpse at it’s towering rainforests and inland lakes. Then jump in your car and drive inland for a more adventurous 4WD experience and to get to know the only place in the world where tall rainforests grow on sand dunes at elevations of over 200 metres.

There are plenty of trails to get bogged on and beautiful lakes to swim in. We love to finish the day off with a sunset champagne on the western side of the ocean at Kingfisher Bay Resort. 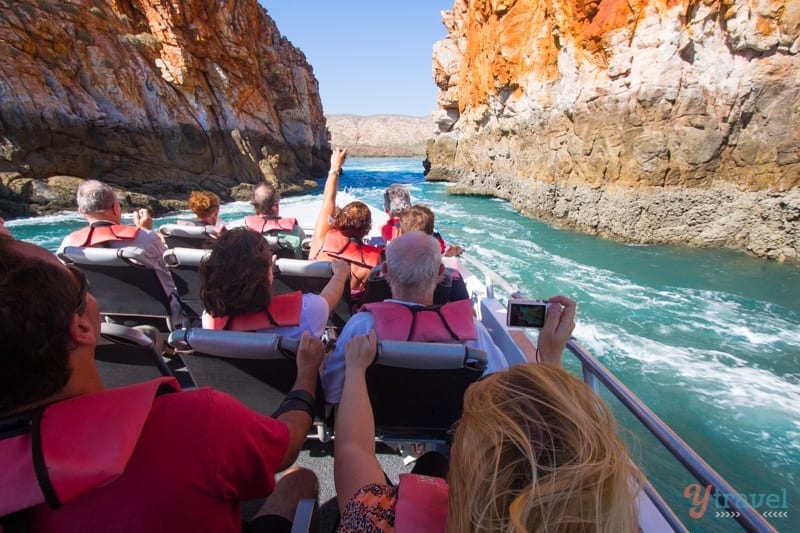 The Horizontal Falls are a natural phenomenon located in one of the remotest and most untouched parts of Australia, The Kimberley region of Western Australia.

A narrow opening between two escarpments creates the Horizontal Falls – and there are two of them! The tides in this region are some of the biggest in the world and can reach a difference of up to 12 metres.

As the tides change from low to high (and vice versa) they are sending an immense amount of water from one bay to another. The build up of that water forms a drop of up to four metres, hence creating a horizontal waterfall.

The tides in this region are some of the biggest in the world and can reach a difference of up to 12 metres.

As the tides change from low to high (and vice versa) they are sending an immense amount of water from one bay to another. The build up of that water forms a drop of up to four metres, hence creating a horizontal waterfall.

There’s only one way to the Horizontal Falls – by seaplane.

Flying low over the red cliffs of Cape Leveque, the Buccaneer Archipelago, winding rivers and stunning Kimberley coastline is an adventure in itself. Our girls were glued to the window scanning for crocs swimming the waters below – this area is teeming with them (as well as sharks and whales!).

Our girls were glued to the window scanning for crocs swimming the waters below – this area is teeming with them (as well as sharks and whales!).

Once you arrive, a jet boat takes you for a thrilling ride through the Horizontal Falls. Hopefully, the water level is up to it’s safe jet-boating level of 1 metre. Adrenaline pumps as you squeeze through the narrow gap with the surging waters of the huge tidal movement pushing you through.

Kalyra was brave enough to throw her hands in the air and squeal on the last run through.

Read More: Things to do in Broome, Western Australia 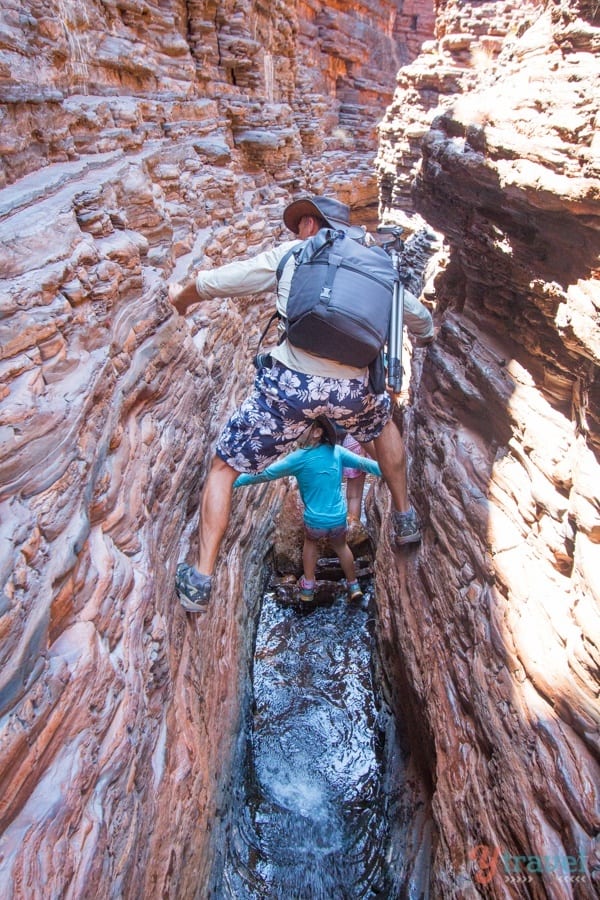 The walk down into Hancock Gorge in the Karijini National Park, in Western Australia, has been described as a ‘journey into the centre of the earth’.

Karijini is one of Australia’s best national parks and is full of incredible hikes through spectacular chasms and marbled rock tunnels to reach cool rock pools and-and waterfalls.

Hancock Gorge is one of the most adventurous walks in the park. Many people told us it was too difficult for our children, which surprised us as we hiked with friends and their daughter, who agreed it wasn’t that challenging at all. The kids found it to be enormous fun.

The walk takes you down a steep ladder into the gorge where you then wade through water, inch yourself across narrow rock ledges (with a very short drop off so don’t fear for the kids) and the fun spider walk. It’s where the gorge narrows so the only way through is to walk like a spider, one foot on either side of the polished rock walls.

It’s only short and, when we visited, the water below was not much more than a trickle. You could walk through it instead of spider walking, but where’s the fun in that?

At the end, you reach Kermit’s Pool, named because of the bright green hue. It’s refreshing and you can swim down a narrow part of the pool to get a glimpse down into Reagan’s pool.

You cannot go any further without ropes, harnesses and an experienced guide. 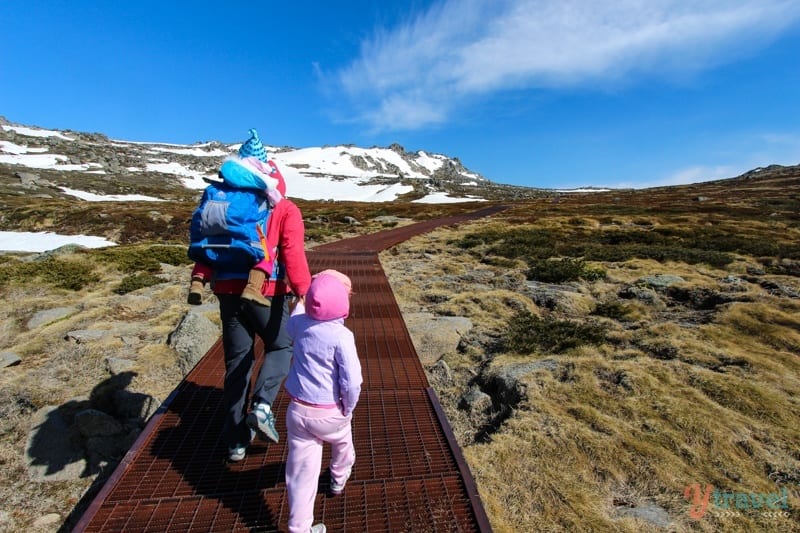 At 2,228m high, Mt Kosciusko is the highest peak in Australia.

For foreigners, this might seem small, but don’t be fooled, it can be incredibly difficult as hikers don’t come prepared. Snowy conditions can happen at any time of the year!

It’s a 13 km walk to the peak. If you have kids, making the 4km walk to The Lookout might be your best option.

We were those hikers unprepared for the biting wind and freezing temperatures. We made it to the Lookout and delighted in seeing the snowy roof of Australia, but after having to hide behind the rock so the biting wind did not blow us away, we decided it was safer to turn back around.

We enjoyed the gourmet hot chocolates we had at Australia’s highest restaurant,  Eagles’ Nest restaurant at the chairlift base instead. The kids loved riding the chair lift up and down the mountain!

If you’re there in the summer, this area of the Snowies also has great mountain biking and hiking trails, bob sledding and horse riding. 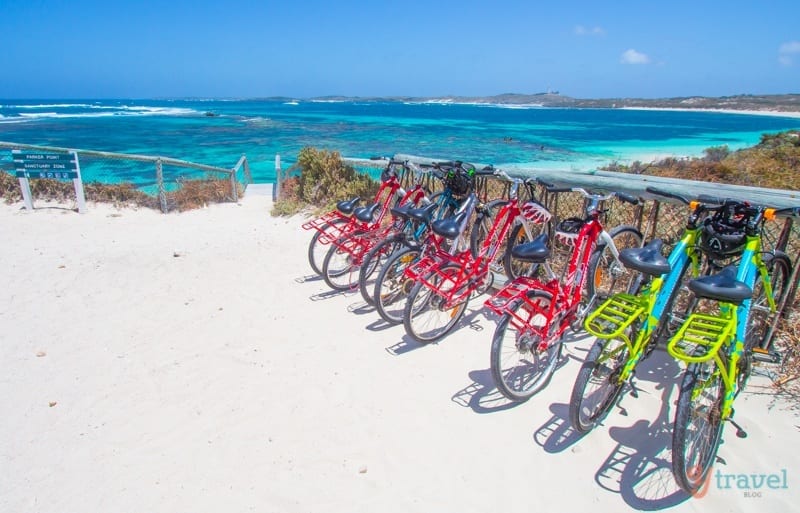 Rottnest Island is a short ferry ride from the city of Perth in Western Australia.

Prepare to slip back into a chilled way of living, where cars don’t exist, only bicycles to take you to some of the most extraordinary beaches in Australia.

Hire bikes on the island and head off for an adventure everyone will enjoy, especially the kids. If you’re full of stamina and strength, you can do the entire 22km ride around the island and see some of the wilder beaches on the Western part of the island.

For those wanting a shorter route, take the 10km like we did with our girls. They had a ball and Savannah loved sitting behind us in the caboose shouting at me to go faster into gale force head winds!

The track takes you to some of the island’s most stunning beaches and cuts through the middle of the island beside the Wadjemup Lighthouse and extraordinary pink lakes.

There are plenty of reefs you can snorkel at many of the island’s beaches. Parakeet and Salmon Bay have some of the best snorkelling spots.

What adventure outdoor activities do you love in Australia?