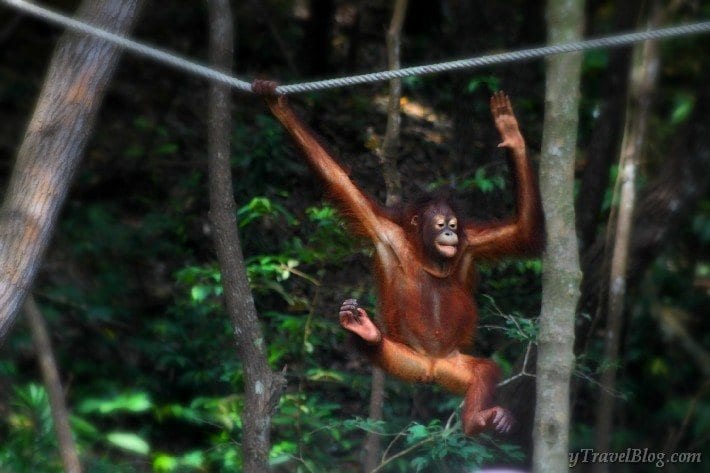 I was excited to be spending time with the orangutans in the Orangutan Sanctuary Borneo.

The Sanctuary is actually in Kota Kinabalu, Sabah in the nature reserve attached to the Shangri La Rasa Ria resort, which is a feeder to the Sepilok orangutan sanctuary.

Orphaned baby orangutans go through their first stage of rehabilitation here before being returned to Sepilok for the second stage and final stage.

I wasn’t sure how our time hanging with the orangutans would be in comparison to my experience seeing them in the wild in Sumatra, Indonesia.

We were jungle trekking in Bukit Lawang (coolest place name ever!) and a few orangutans came swinging through the trees when they heard us approaching.

They were rehabilitated orangutans so were used to human contact, so used to it that we hand fed them biscuits.

It’s pretty hard to beat an experience like that.

But travel is not always about beating one experience or comparing, it is about savouring each moment as it is presented to you.

Visiting the orangutans in Kota Kinabalu, Borneo was different, but there was so much I  enjoyed and gained from it.

Mostly how precious they are, how they are so like humans, and how they desperately need to be protected. 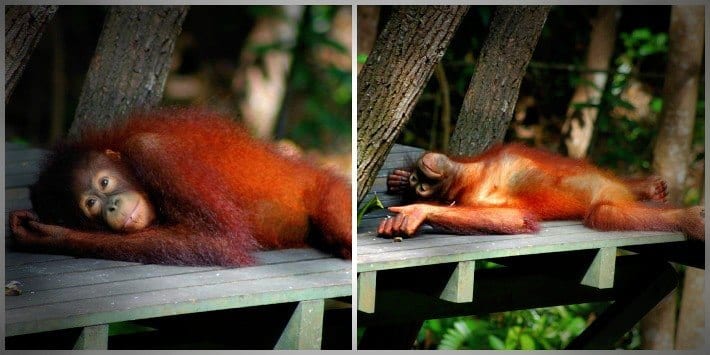 Visiting places like the orangutan sanctuary in Borneo allows us to see just how much they are worth protecting and causes us to fight harder for them.

The orangutan sanctuary is doing all it can to rescue orphaned babies, become their mothers and teach them how to survive in the wild.

It’s a pretty hard thing to do when you have poachers and habitat-destroyers tracking their orange furs down in their rainforest homes.

All I could think of were my children as we sat and watched.

The two girls were just as cheeky and playful. They loved to show off and be the centre of attention. They fiercely protected their food from scavenger long-tailed macaque, who were very clever in staging their food kidnappings.

They hung upside down to eat and did limbering exercises and yoga poses with the flexibility that only our babies ever know.

We watched from a platform inside their jungle home.

The nature reserve is within the forest and they could wander off if they chose to, but they are happy and content in their home for now until they learn how to survive in that big bad world.

We were there for feeding time, a time that involved a lot of playing, unco-operativeness and tantrums.

I recognized Kalyra’s animal twin in one of the orangutans as she threw herself on the floor, rolled around banging her head and hanging over the edge of the platform in protest.

Human parents aren’t the only ones who suffer at meal times. 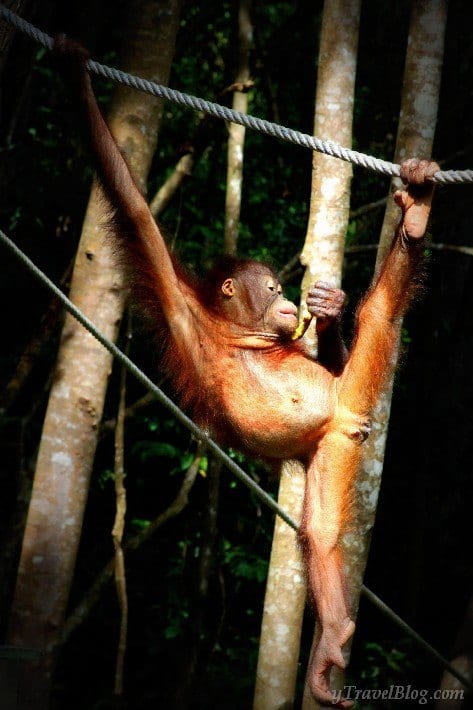 We were lucky enough to see the baby orangutan in a small bamboo sheltered area of ther eserve.

She was a little frightened by all the people and ran from one tree to the other making little squawking sounds. I wanted to pick her up, cuddle her and shoo everyone away.

She was the same size and weight as Savannah and just as clingy and cuddly begging her handler to hold her all the time, but he kept releasing her for some play and swing time. 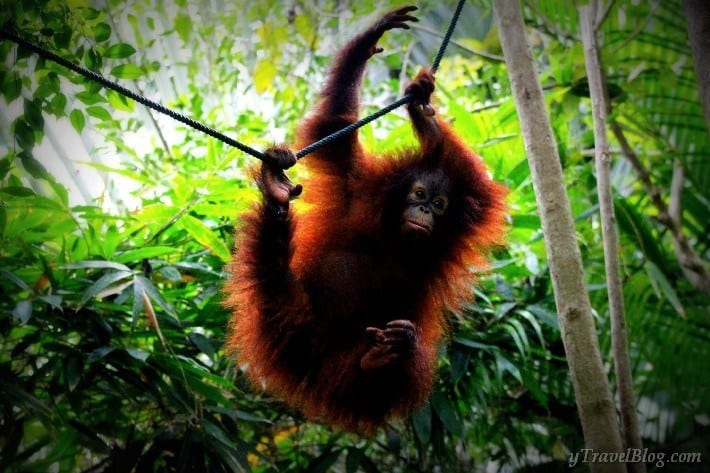 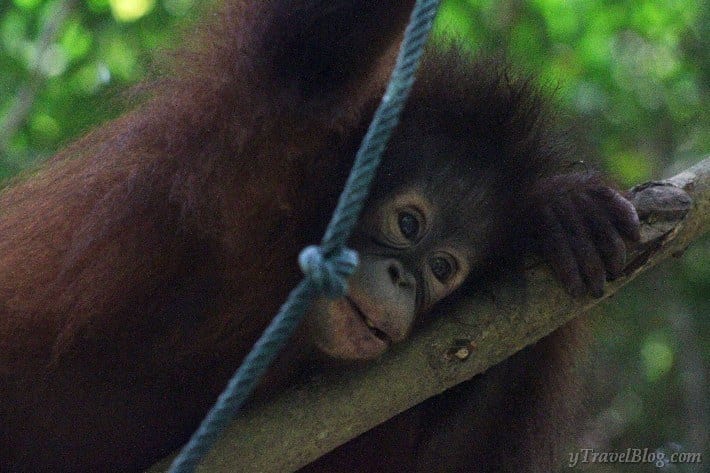 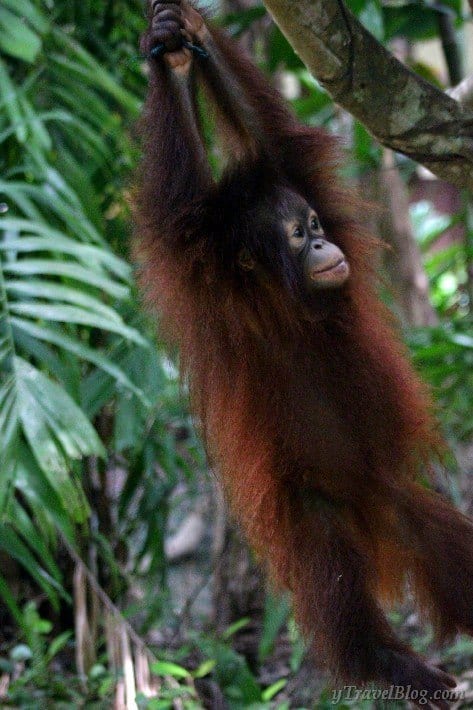 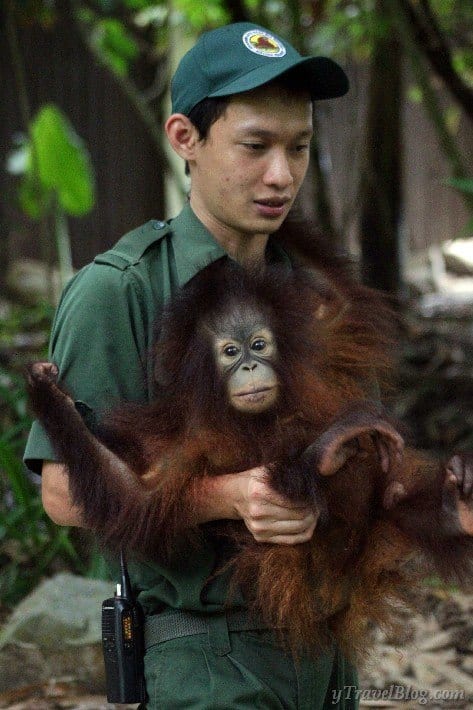 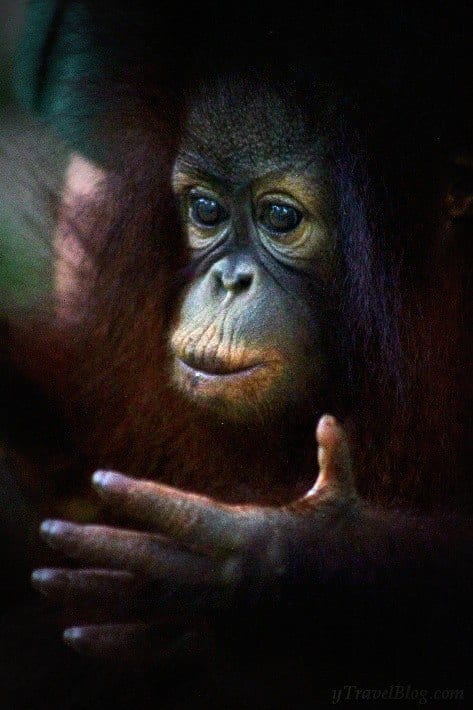 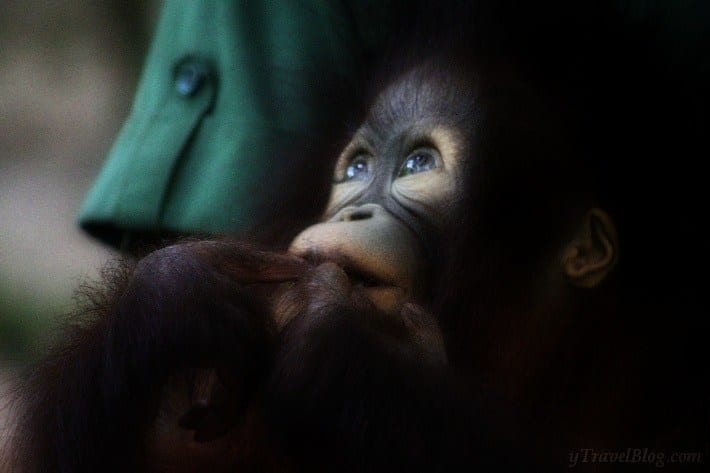 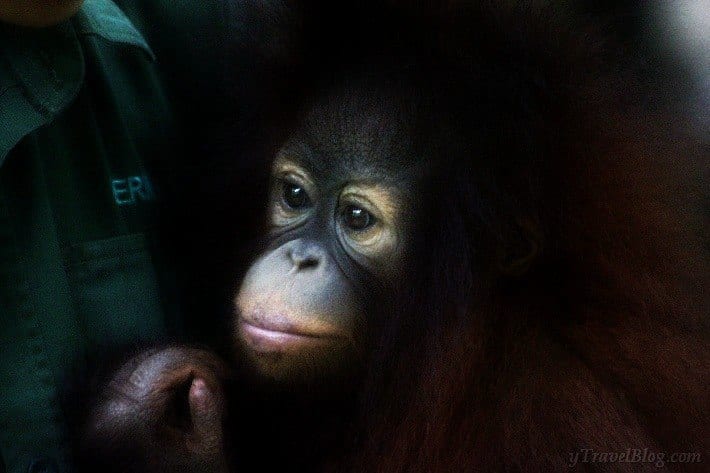 They may not speak human words, but they act, play, and feel like us. They are called Man of the Forest for a reason and we need to take better care of our animal friends.

They need us more than ever.

A friend told me of his experience encountering orangutans both at the reserve and while remote jungle trekking in the Sabah. Of course, he compared the wild encounter to be more worthwhile.

I don’t think you could beat the thrill of that, but there is so much joy to be had in spending time watching them play in sanctuaries as well.

Whether it’s a random encounter or a planned visit, it’s heart warming to be close to their carefree, playful spirit.

I wish us humans could be more like it in all we do.

Have you seen orangutans in the wild before or in a sanctuary?

I traveled to Malaysia courtesy of Malaysia airlines and Tourism Malaysia. If you’re inspired to check out Malaysia just as I have, head to travel.com.au for more info

25 thoughts on “Hanging with Orangutans at the Orangutan Sanctuary Borneo”