There are certain moments of our life that will always be brought back by a special song that captured the essence of an experience.

As I sat on the bus watching Centrepoint Tower and the Sydney skyline fade into the distance, I knew that I would never be able to hear Cat Steven’s ‘Moon Shadow’ without thinking of the evening I walked around the Australian bush guided only be the light of the full moon.

We were on our way to the Royal National Park, Australia’s oldest and the world’s second oldest National Park.

A park that fades into the Blue Mountain’s shadow, but one that has just as much stark natural beauty, and Aboriginal and White Australian cultural significance to explore.

Situated only an hour south of Sydney, the park’s diversity can be seen in its coastal cliffs surrounded by heath, sandy beaches, and mountainous sandstone ridges with deep river valleys that are home to a mixture of Eucalyptus woodlands & temperate rainforest.

Andy, our tour guide and owner of Down Under Tours, was determined to make this unique adventure an unforgettable experience.

The bus trip to the National Park began with a play list of Moon Songs to get us in the mood. How could John Butler Trio and music from the Lion King not inspire you to stride purposefully forward?

Lots of little surprises like this awaited us on the journey.

Andy was always popping something new from his bag of tricks, the most touching being the glowing ice cube to place in our moonshine. Moonshine, as in energy drink, rather than highly potent liquor made from potatoes.

The moonshine was there to help us get through the evening and although I was incredibly excited about the journey, I was concerned as to whether I would make the 10km nocturnal hike along the coastal track.

Andy’s passion and enthusiasm for the park and the cultural heritage of the Dharawal Aboriginal tribe, the original owners of the area, is so evident in the stories he tells and the energy that radiates from him as he bounds about in the bush, ready to share and have you experience the same natural high that comes with spending time in nature.

The theme of the evening was to merge technology with simplicity and the Moonwalk was tastefully done as so.

The emphasis was on night photography, and a professional world-class photographer, Peter Solness, joined us on the tour to teach us tips and tricks on how to take amazing nighttime photos.

Our group of about 20 began the evening at the tranquil Wattamolla Lagoon which opens up to the beach and sheltered cove.

Wattamolla means ‘place near running water’ and this was because at the back of the lagoon was a small gorge with a waterfall running over it.

According to the rest of the world, it would have been known as a trickle, but in the eyes of the driest continent on Earth it was a true marvel.

Andy’s dad and partner, Gary, told us a story of how the original charters of the Australian coastline fell into trouble in their little 14 foot boat and had to take shelter within the cove of Wattamolla Beach. The evening was full of little known stories from history and information that helped us to connect Australian culture to the land we were walking upon. 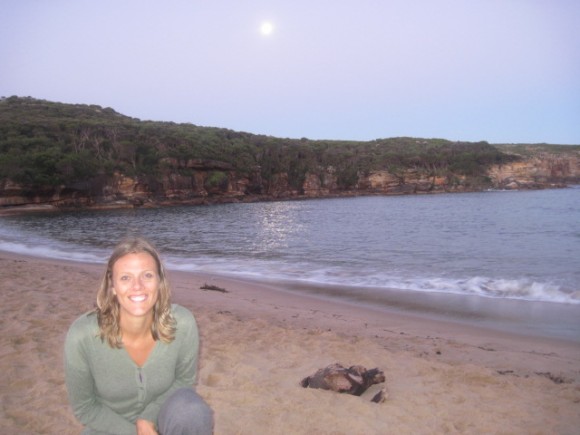 The full moon was shining above the red and gold ochre sandstone cliffs, reflecting its silvery tail on the ocean below.

The sun opposite, hid beneath the mountains leaving a soft pink sky behind, perfect for our first photography lesson with Peter. As night descended we bought out torches and with long exposures were able to capture our names written in the sky on the beach.

We made our way back to the picnic area for our moonlight dinner and found a trail of tea candles lighting our path to a table sitting under a tree aglow with pixie lights. Understand Down Under had gone all out to provide us with a delicious meal of barbecued meat and fish and mouth-watering salads.

Wedding cake rock was where we had a lot of fun having our own full moon dance party and taking many photographs to remember it by. New travel Friends who were not long ago strangers, danced around each other waving our glow sticks and lights to create electrifying nighttime photos.

My favourite part of the walk was the approach to and walking across Big and Little Marley Beach.

The emptiness of the beaches as viewed from the headland was beautiful. The colors of the golden sand and water were surprisingly quite visible and I just wanted to run and get lost down there in its power forever.

The air was so silent and still and our merry little group suddenly became lost in their own thoughts and the magic of this spiritual place. Nature’s power over took us.

It is the silent space between notes that creates music and it was here that I could clearly hear the music of the Royal National Park.

A small creek ran along the base of the mountain into the ocean, which we had to cross to reach Little Marley Beach. The water babbled and twinkled over the rocks running into the ocean, rising to a great crescendo the waves crashed to shore and the percussion of our feet squeaking in the sand created the harmonies of the night.

The Earth sang to us as we made our way across the beaches to the other side of the track.

Across the rocks, we saw the flashing torchlight of what must have been illegal campers or rock fisherman. The park is closed at sunset, and you can only go on the moonwalk hike with Down Under Tours, who have special licenses to take hard-core adventurers for insane sunset to sunrise hikes.

As we made our way closer to the lights, we laughed at the thoughts that must have been running through their minds, as in the distance they saw trails of glowing neon lights snaking their way closer towards them. We hoped that they weren’t smoking or ingesting anything illegal down there and thought the aliens were coming.

Tiredness was really beginning to set in now. Andy continued to pick us up with natural sugar lollies and some of his own natural energy. He bounded around the trail like a mountain goat, weaving in and out of the line and jumping out to take double exposed lunatic photographs and give an encouraging word to keep us moving forward.

The trail wound its way into the bush and a different peaceful energy came with the soft, gentle breeze making its way into the tunnels we walked through. The trees and shrub surrounded us and we lost our faithful moon friend. This marked the end of the trail and it wasn’t long before we saw our van in the distance at Wattamolla Lagoon.

We picked up sleeping bags and pillows and made our way down to the beach. The pre-dawn air was freezing and we snuggled up for warmth and an hour kip on the sand before the sun was due to rise. As tired as I was, I found it difficult to sleep. How could I close down my mind and shut out the stars that provided a roof over my head? I could not yet leave the moon, who had stuck with me all night.

This was a primitive experience that was far too beautiful to shut out with the closing of my senses.

Enveloped in the cocoon of the earth, I closed my eyes and allowed myself to get lost by the sounds of the waves crashing all around me. Soon I didn’t know where they ended or began and  I melted into the sand, becoming one with nature.

The sunrise call soon came and I opened my eyes to see the golden orb pop up over the horizon, hide behind a cloud, and then pop back up again in a double sunrise just for us.

Once again the beauty of Wattamolla was lit up for us in soft lighting, except now the moon and sun had swapped places.

Why is it that we don’t spend every morning greeting the day in this way?

[/caption]We eased into the day with breakfast on the headland above the lagoon with views out to sea. We chatted as old friends, united now by this amazing adventure. Andy still bounded around making sure we were happy and comfortable.

As someone who has been readjusting to life back in Australia for the past couple of months, I’ve been struggling to love and appreciate my own country. My gratitude goes out to Andy for showing me once again just how magical Australia is. I’m falling in love with her all over again.

Sunrise from above the Lagoon Photo: Andy Richards UDUThat evening, I sat on my couch away from the magic of the Earth and back in front of the fabricated energy of the idiot box.

As my drooping eyes battled to stay awake for just one more hour, the lonely birds flew inside my soul and I began to yearn for the quiet solitude of the bush and the guiding light of the full moon.

While a return to the real world for now is necessary, at least I will always have the memory of the night the bush welcomed me into its nocturnal arms to help carry me through my days. 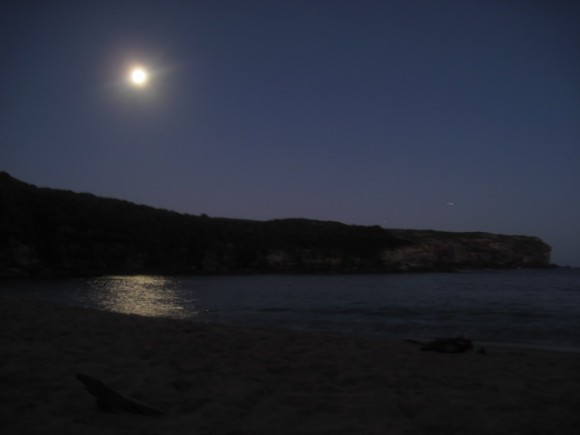 Where: Royal National Park is situated 29km south of Sydney CBD in the Sutherland Shire

When: Every month on full moon. It is a sunset to sunrise experience

How: Understand Down Under run the tours. Visit Sydney Moonwalks

Bring: comfortable hiking shoes, warm clothing, camera and a tripod, your sense of fun and adventure. Get plenty of rest before the hike.

Many thanks to Andy, his Dad, Gary, for this sponsored tour and for the amazing crew who helped make it an unforgettable experience.