I couldn’t imagine being caught in such a downward spiral that I had to sell my children.

It’s certainly not what you hope for when your baby is first placed in your arms. You take one look at their angelic face and you promise you’ll protect them and do your best to give them a good life.

Imagine getting to that place where desperation kicks in and your instincts tell you to keep yourself alive.

It’s a place where drug cartels, human trafficking, AIDS, addiction and destitution has taken over and so parents sell daughters in order to feed the addiction, make the money, and survive.

The destruction of Doi Tung, Thailand

This is how the tribes of the Doi Tung region in the mountains of Chiang Rai, Thailand found themselves over 20 years ago.

Their homeland was ravaged, razed and burned to the ground over and over again in order to support the world’s opium habit.

There’s no sign of that now as I stand on the teak porch of the Royal villa, a European style Swiss chalet overlooking the valleys. All I see are mountains covered with a lush forest and flowering plants. 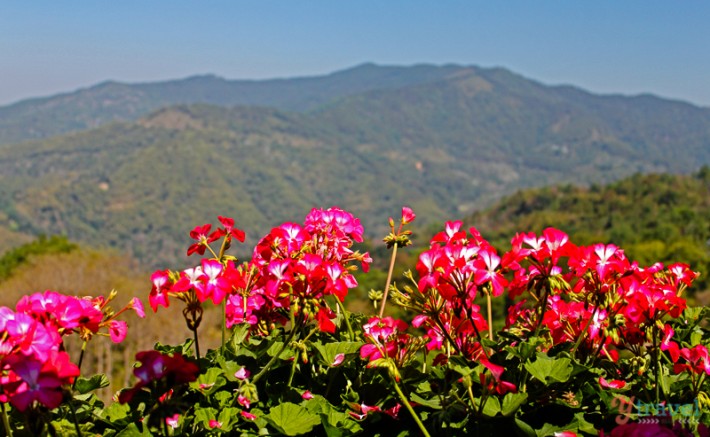 This area once formed part of the infamous Golden Triangle; the biggest supplier of the world’s opium.

We hear about those addicted on the streets in our own home towns. We don’t often hear of those at the core of its growth and how their lives have been destroyed in order to create incomes for their families.

It wasn’t just the opium trade that was a problem in Doi Tung. The residents were of six ethnic groups without Thai citizenship. They lived in a “survival world” where people lived in abject poverty, without basic infrastructure or government support.

Armed groups occupied parts of the area, which made it even more difficult for government officials to provide any assistance to the local residents. 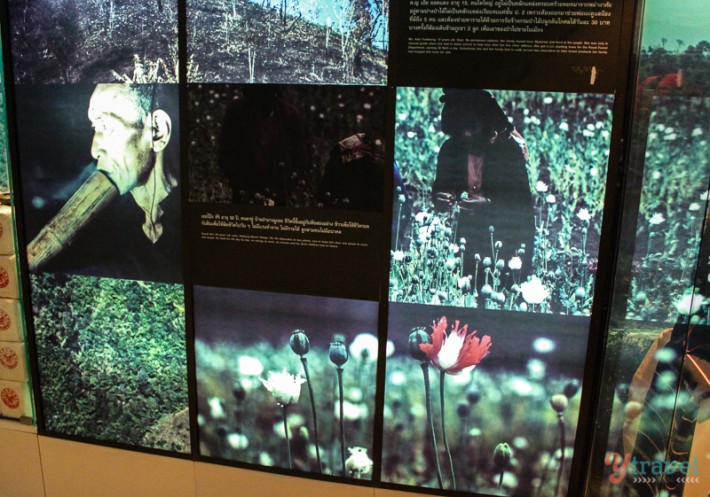 They were a people who were lost and destitute.

Until one day in 1986, a small lady arrived in a helicopter. She saw the bare hills where forests once lay, villages and family units in tatters and declared,

“I will reforest Doi Tung.”

That was a lady whose stature belied her strength of spirit, compassion, and dedication.

She was the Princess Mother, mother to the King of Thailand. Her husband died at young age, and she raised two kings and daughter on her own. She was a commoner and so helping those less fortunate was a passion of hers.

The Princess Mother saw the root of the problem, poverty and lack of opportunity, and decided to improve the conditions of Doi Tung, socially, economically, and environmentally.

She demonstrated her commitment by building her home in Doi Tung, giving hope to the ethnic minorities and providing opportunities for all people regardless of race, religion, or nationality.

Her vision was to allow people and nature to coexist in harmony, by aligning the people’s interests with the preservation of the natural environment and providing opportunities for all, regardless of race or religion.

She chose not to come in with money and handouts but instead empower the people to make the change. To want to work for something better. To restore the trees and the crops, the children to their mamas and the hands to create art again.

She made the people believe that people and the forest can co-exist and they have the power to create their own destiny through the use of their talents.

It was her Royal Project.

Upon my visit to the Doi Tung Royal Project, the Princess Mother quickly became one of my heroes and inspiration to show me what can be done when you care and you empower.

Healing of life in Doi Tung

When you visit Thailand, one of the first things you become aware of is the love and respect Thais have for the Royal family.

I always appreciated this, yet never fully understood why.

I myself have never been a major fan of royalty. It was visiting the Doi Mung Royal project in Chiang Rai when I finally understood the greatness that can come from having Royal Family, one that is truly committed to improving the living conditions of their people. 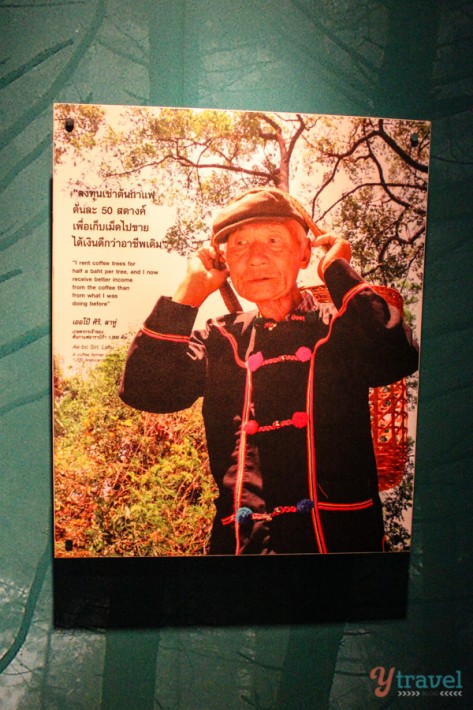 “Learned by being hands on that we could help ourselves”

The locals call her the Angel Princess – she came down from the sky, and like drops of water swelled to relieve parched hearts, drought and suffering.

She helped restore a sense of belonging to the people and taught them means of creating a legitimate income through coffee and macadamia plantations. She carefully selected crops that were in high-market demand that grew as well as opium, yet did not destroy the land and community.

She used science to create rain clouds to return growth to the forest and economic trees were planted. 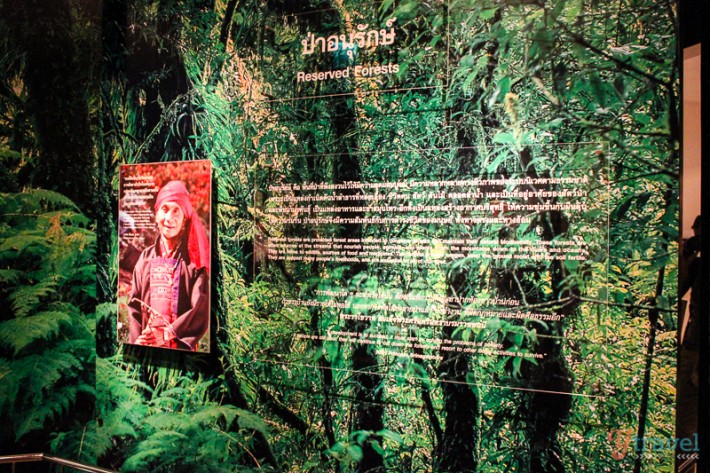 Locals went from being opium growers to forestry workers, planting trees to earn legitimate incomes overnight. This quick hit helped develop their trust in the Project.

Drug addicts were rehabilitated and democratic counsels were created to ensure those in trouble had a place to go for help and through this a zero-tolerance plan was put in place.

Daughters were no longer sold; they were taught in schools instead.

“A basic and human right and valuable for all.”

The local artisans skills were improved upon and they could now earn legitimate income from products created by the people.

The quality of their vocational training was high as the Princess Mother intended that “No one should ever buy our products from pity.” The sale of these high-quality products helped contribute to a drug-free world.

“We repay the kindness by looking after the trees and forest, not burn them down. I would be a pauper drug addict if not for the Princess Mother.”

The Royal Villa and surrounds tour 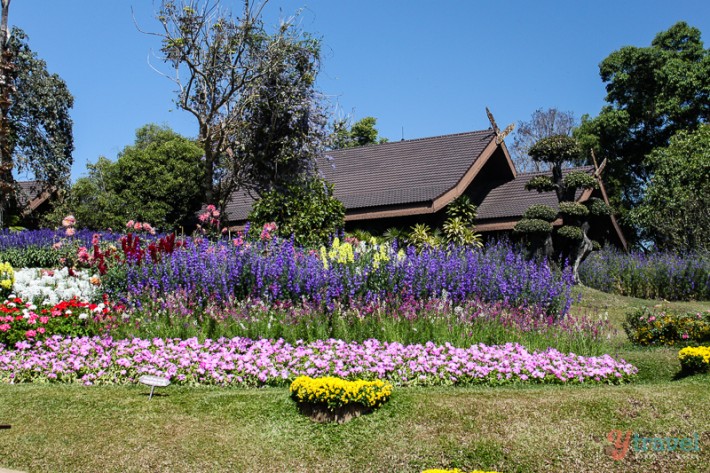 You can visit the Doi Tung Royal Villa to hear the story of the Royal Project and to see first hand how life is thriving in the area.

I’d plan for at least half a day to be able to explore fully the area. There are many different sections and the story is fascinating enough to warrant an in-depth experience.

The surrounding gardens are tranquil to wander through and the teak style Swiss chalet come Thai style home is beautiful to enjoy. You get a fabulous glimpse into the humble life of the Princess Mother and her family.

There is a restaurant to enjoy many dishes prepared from the local produce. I highly recommend stopping off at the cafe for an iced coffee and to take home a bag of Doi Tung coffee.

Would you mind sending me a packet if you do? That stuff is good!!

On site, there is also a Hall of Inspiration, which shows the character, philosophies and working principles of the Royal family, and their diligence to find ways to improve the lives and livelihoods of the Thai people in all corners of the Kingdom through simple but effective works.

The arboretum, where native flora and rare species were gathered alongside rhododendrons from different countries, has paths that wind down the mountain slopes, leading to rest areas and panoramic views overlooking the distant topography of Thailand’s neighbouring countries on the other side of the Mekong River.

The Cottage Industries Centre and Outlet of the Doi Tung Development Project was established as a handicrafts training and job creation centre that was launched alongside with the Project’s reforestation projects.

You can visit to see the artisans at work—3 generations sit in the factory working together.

Seated on the floor spinning the yarn, were many elders of the community. Their fragile hands could not possibly do the work of those younger and cheaper than them, but they retain their jobs so they continue to have a sense of self-worth and contribution.

You will walk away after an experience at Doi Tung believing in humanity again and how much goodness can come from love and compassion. 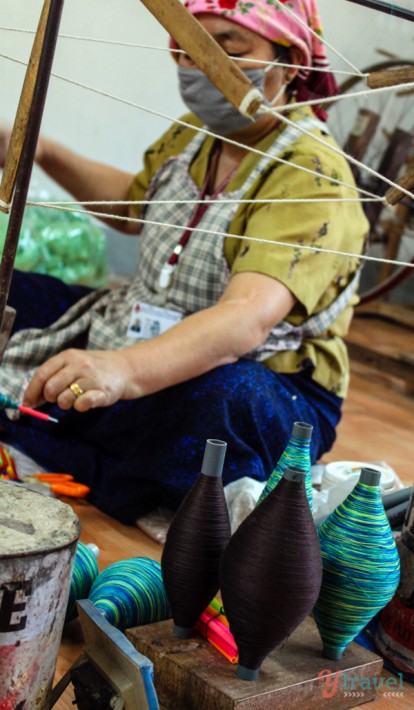 Had I not been on a tour with Thailand Tourism, I probably would never have visited Doi Tung. It’s easily one of my favourite Thai experiences. I really think you need to add it to your Thailand bucket list.

The Project has been financially self-sustaining since 2002.

Today, locals are being trained in everything from landscape design to coffee roasting. They are encouraged to set up their own enterprises.

In less than 10 years, the ownership of some of the business units in Doi Tung will be transferred to the local community.

The local community is well aware of their responsibility for their impact on the environment and they are so proud of what they have created and how far they have come.

Foreigners are no longer demanding illicit drugs from them, but are instead coming to learn and find ways to implement the success of this project in their own lands.

In 2005, they were asked to help Afghanistan change their opium issue and the project is recognized world wide as the true meaning of sustainability for all.

The Doi Tung Royal Project is a beautiful example of how government and private sector can work together to raise people up by their own hands.

The path to a solution starts with a small step, and that small step can be effective enough to “Pull people out of hell, restore land, community and balance to the earth.”

What was one thing that really stood out for you that you can learn from the Princess Mother and her work?