I love travel experiences that teach my girls a little about the world. It’s even better when it also fascinates them.

It’s hard to grab the attention of a six and a two year old, but the Capricorn Caves and Koorana Croc Farm in Rockhampton did a good job of it.

If only all my homeschooling lessons could be this good!

They did an amazing job of capturing my attention too. I was a little unsure as I’ve visited croc farms before and was a bit ho hum. And how many limestone caves can you see?

Well, it all depends on the stories that lie deep within the cavernous walls or in the shallows of a murky waterway.

The first sign that I liked both of these experiences was that both businesses were created and run by families. The stories behind them were incredible and I loved to hear how they overcame adversity to create a thriving business and valuable experience for any traveller.

Not just for travellers, but for conservation as well. 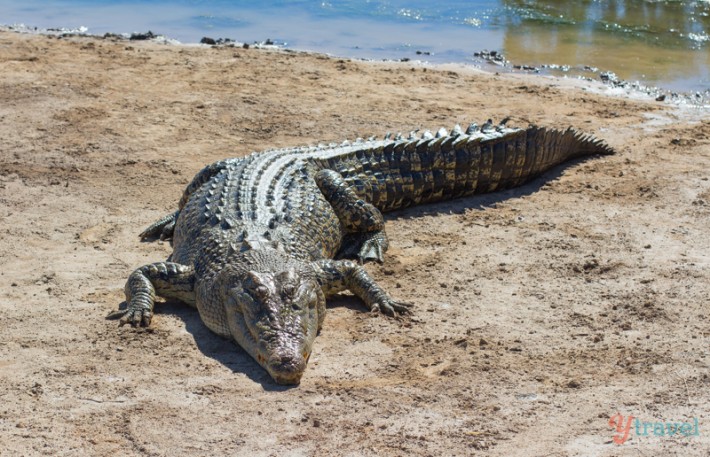 It’s hard to imagine a crocodile farm falling under the banner of conservation, but I understood it as soon as our guide, Adam explained how the farm was born and how it does help protect the crocs.

Adam is the son of John and Lillian Lever who started the croc farm in 1981. It’s an approved farm, operating under the Australian Government’s strategic conservation program.

Years ago the government received a harsh realization of the effects of crocodile hunting. Kakadu, an area almost 20,000 square kilometres, and once teeming with crocs, had less than 3,000 crocs.

As Adam said, “Imagine a country half the size of Switzerland that only had 3,000 people”

So the government banned croc hunting and the black market sprung up, which did not help the crocs plight.

In an effort to join them instead of beating them, the government allowed commercial farming.

So now the croc numbers in Kakadu are up around the 10,000 mark and increasing in healthy numbers. 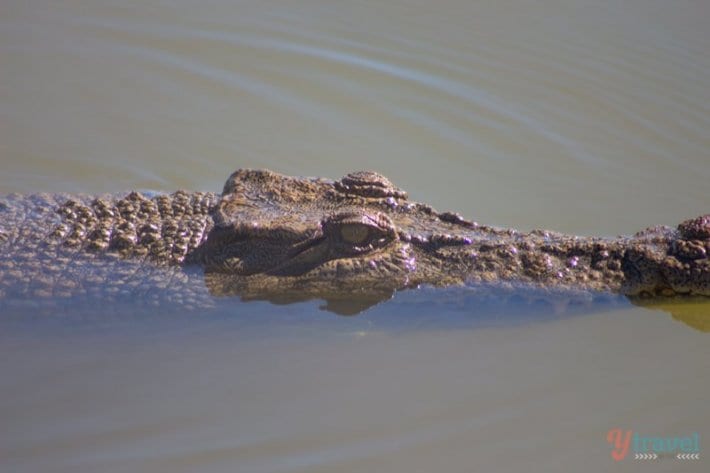 It makes you think about commercialism conservation and how it can in fact save species.

I have this fear of crocodiles that often wakes me in the middle of the night in a sweat. I panic that the girls have gone to close to the edge of the river bank in a momentary lapse of my concentration.

At times I often wish the hunters could have had their trophies and wiped them out of Australia. But how is it fair that my fear determine the fate of the crocs and, in turn, give a very unhealthy balance to the ecosystem?

Crocs are a hugely important part of nature’s balance. 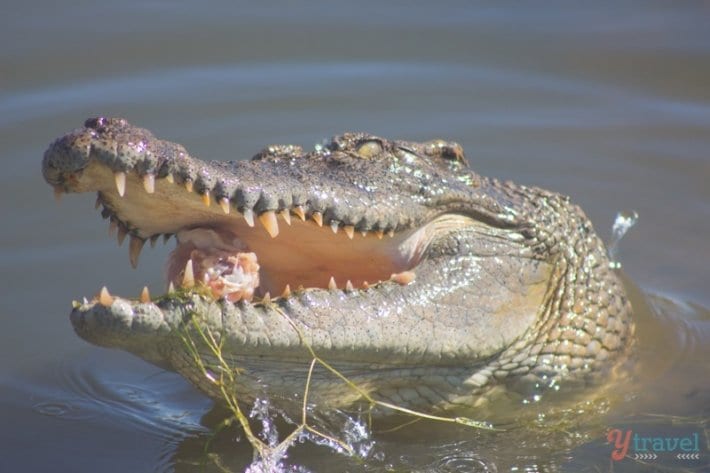 Koorana Croc Farm helped to give me a deeper appreciation and respect of the saltwater croc. The saltie has evolved and thrived since prehistoric times.

This stealth hunter deserves our fear. 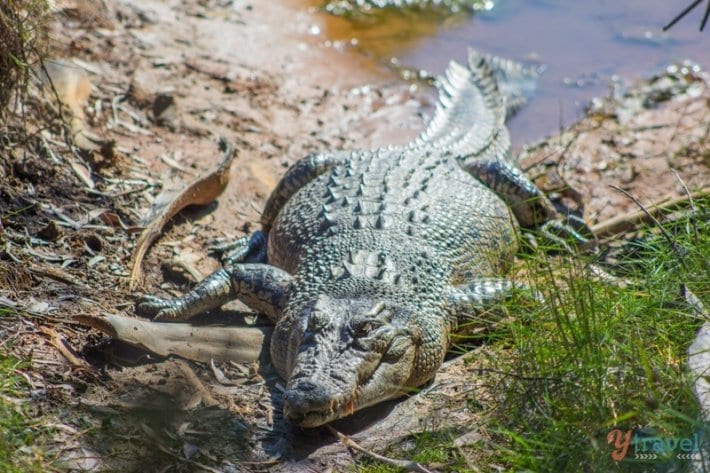 The Lever family treated them with a lot of love and awe.

Adam climbed over the fence to stand next to, and feed, a ginormous 5 metre croc – his pet! He spoke to it gently, called it over to his side and coaxed it to stand up and smile for our cameras – a trick he’s worked on for years to perfect. 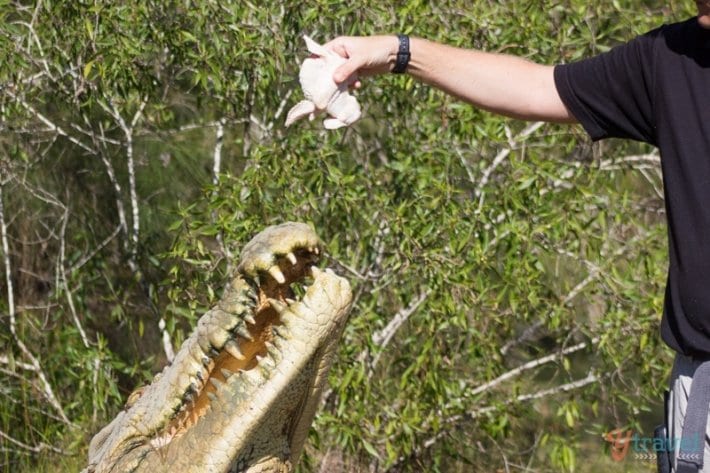 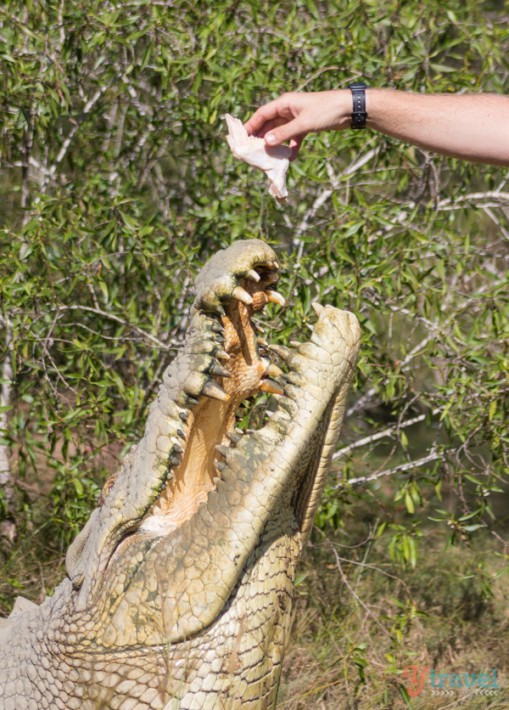 He then jumped into the next pen, to call another monster out from the murky depths for some lunch. He wanted to show us that they are not the aggressive monsters that we humans like to thing they are.

And they’re not, they’re just doing their crocodile thing. As long as they do it far from where I am, and pigs and cows are their only dinner, I’m happy. 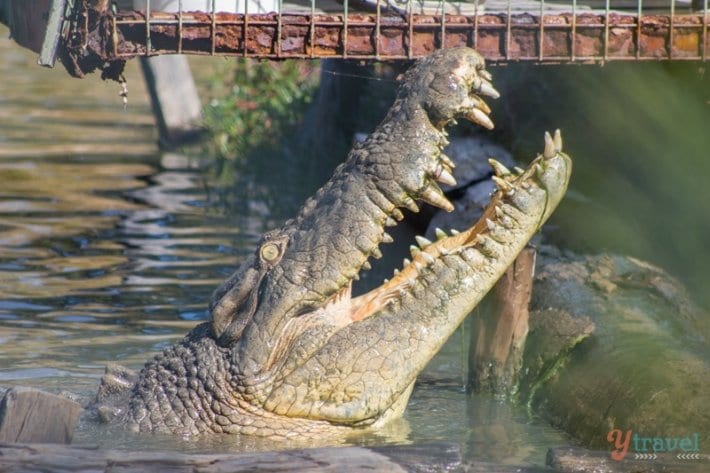 We learned a lot about crocs on the tour and the girls were mesmerized.

Although Kalyra refused to hold the baby croc despite his teeth being taped up. Savannah jumped straight in there with me and needed gentle reminding not to squeeze baby crocs leg too tight! 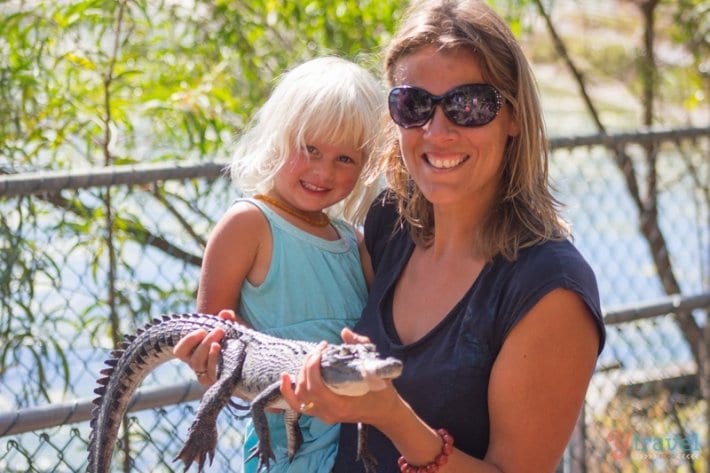 They both now have some awe and respect for the croc and I’m pretty sure they won’t be going near river banks.

I won’t say I feel more at ease being in croc country for the next 5 months. Complacency can be the killer. But, at least I now know a little more about the beast, where they hang out and how to not take any chances.

Oh, and when you visit Koorana, be sure to check out their famous “croc pie” for lunch. 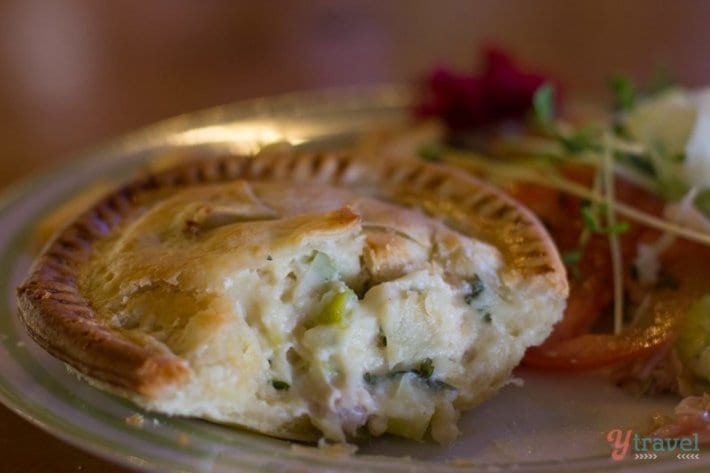 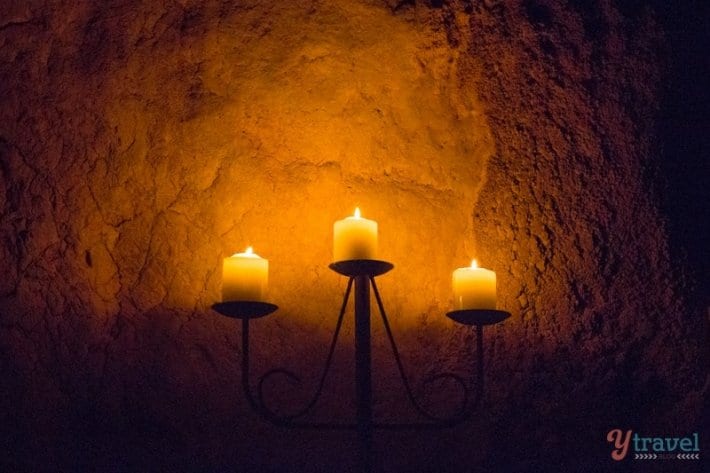 Ann and Ken Augusteyn were keen to bring back some of the travel excitement in their life and went looking for an opportunity – something new to get them away from teaching and plumbing and their Brisbane home.

Their story reminded me a lot of mine and Craig’s.

They discovered Capricorn Caves in 1988 and decided to buy. Ken would sketch of an evening in his living room the plans he had for the Caves, which over 25 years has been brought to life.

It’s a fantastic place to visit and not only offers cave tours, but adventure caving, school camps, rock climbing, abseiling, high ropes and accommodation by way of camping, caravanning and cabins.

You’re out in the bush so serenity is yours to enjoy.

Capricorn Caves were original discovered by John Olsen back in 1882.

Our guide, David, told us the story of his discovery and his two-year journey exploring and mapping out the caves, sludging through bat poo and creepy critters up to his knees with only a candle to guide his way. 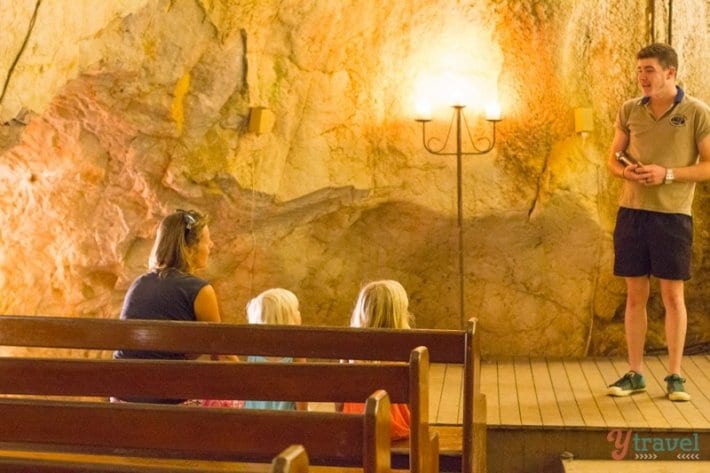 The problem being a persistent draft that would blow out his candle and force Olsen to crawl back out the entrance using a rope tied to his waist to guide him in the pitch black.

Once back outside he would light his candle again and go back in.

Now that is real passion.

The bat poo later proved to be quite lucrative and miners moved in to heave out bags of the guano. But, their involvement in the caves was short-lived after they blew a tunnel through the caves to gain access to a cavern.

This was a no-no in the contract as Olsen wanted it all kept in its pristine state. So they were booted out. And that is the only man-made tunnel remaining.

The rest of it is as nature has created.

Flowstones and stalactites only a few centimetres long that have taken thousands of years to form. Fig tree roots clinging to limestone walls and rare ferns making a home in the crevices.

This man made tunnel did give us access to the Cathedral, one of the highlights of the caves tour. It’s a place where many choose to get married and where opera concerts are held every year.

The acoustics in this cave rival that of the Sydney Opera House and we sat on the pews and listened to Jeff Buckley’s Alleluia. 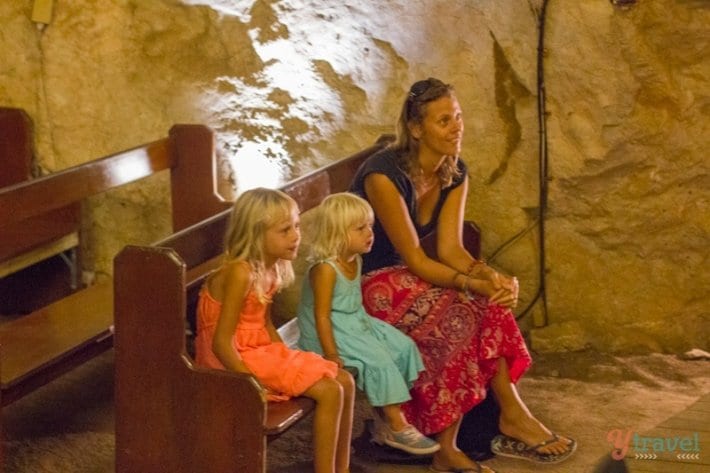 The most perfect setting for this song. I couldn’t’ help but add my own, albeit tone-dead, acoustics to the cave.

The lights moved around as we sat and sang, highlighting the organ created by stalagmites and the stained glass window, a small cavern lit up by red lighting.

After our concert, David turned off all the lights and we sat in the darkness. I mean pitch-black darkness where you cannot see a single thing. And we imagined how Olsen must have felt all those years ago crawling around in the bat poo.

I’m quite happy being a travel blogger that visits places already discovered thank you!

Along the way we checked out extremely small holes and tunnels like the laundry shoot and the whale that the adventure caves get to climb and slide through. I’ve noted it as a thing to come back and do.

A fun part of the tour was walking over the swinging bridge in the dry rain forest to access the narrow Zig Zag passage with lighted candles, giving us a tiny glimpse into Olsen’s adventures. 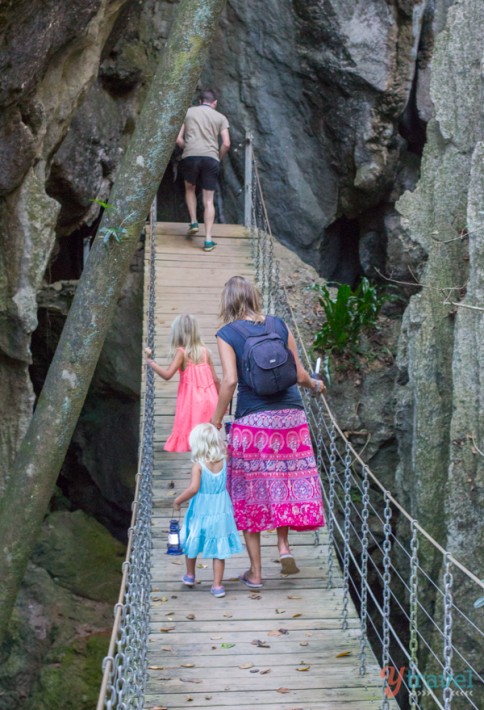 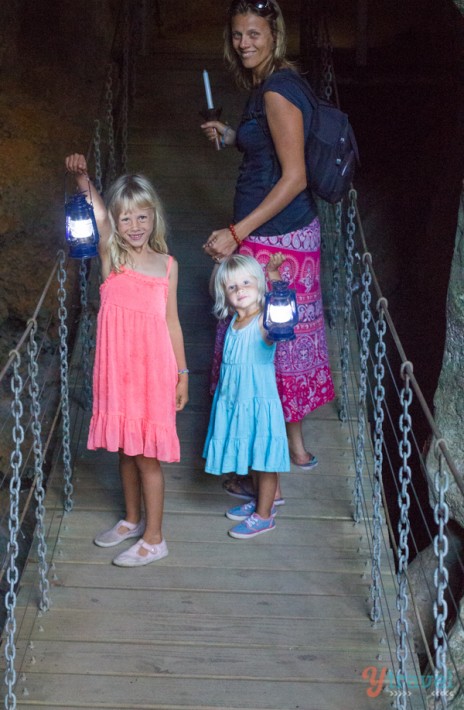 After the Cathedral tour we ventured down into a cave to see the archaeological digging spot. The Queensland Museum have a site there where they are digging up fossilized remains for various mega fauna spewed up their by owls and preserved by the bat poo. 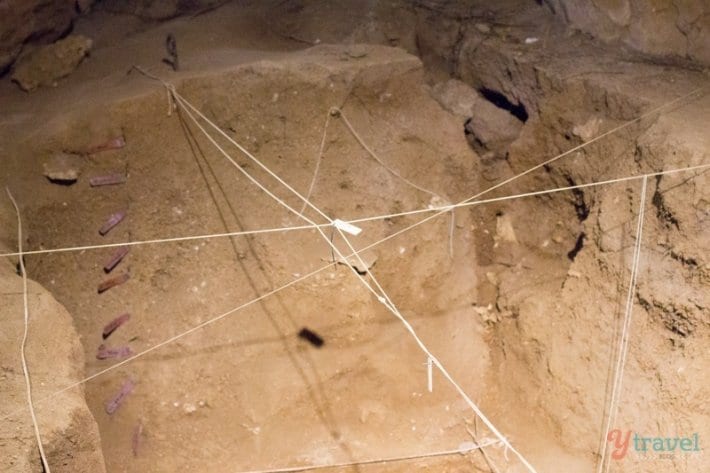 We were then able to go into a small room and look at some of these under the microscope.

We had to discover them for ourselves in the dirt and then identify it using the information chart beside us. Even Savannah had a go. 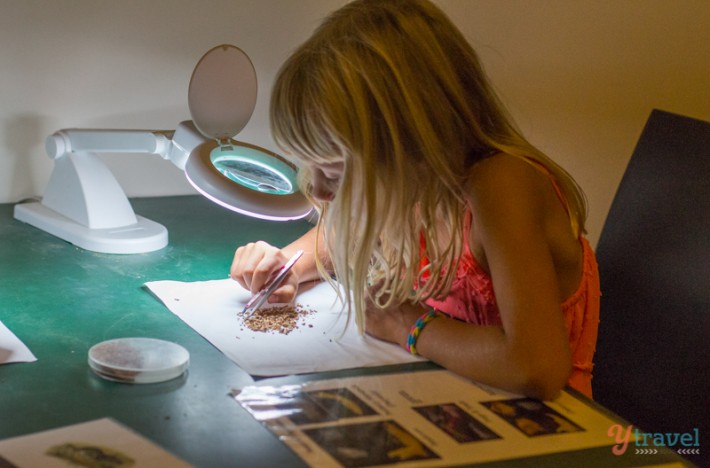 It was a brilliant science lesson for Kalyra. She LOVED it and had no idea we were checking off a whole heap of outcomes for her Science curriculum – learning the way it should be.

We stayed at the Coolwaters Holiday Village at Kinka Beach. It’s located halfway between Yepoon and Emu Park, near Rockhampton. We were so busy touring, we did not get to experience the enormous 5 slide waterpark. The girls were most disappointed. It’s a huge park and the cabin we stayed in was very comfortable. We recommend taking a morning coastal drive up to Yepoon. It’s very pretty.

Disclaimer – Our visit was in partnership with Tourism Queensland. To plan your next trip check out Queensland Holidays.