It’s a family-friendly bike White Mountain ride in Franconia NH they told us.

Similar to when I was told the downhill alpine mountain biking track in Austria was the blue family-friendly line. I ended up flying over the handlebars and almost breaking my jaw.

Granted, they did warn us that it was mostly uphill for the 8.8 mile one way recreation path through the Franconia State Park in New Hampshire.

We had completed a gorgeous 11 mile round trip family friendly bike ride in Stowe a couple of days earlier, so we were bike confident.

If it’s uphill on a family friendly path, we should be okay, right?

Two miles in and we were dying.

Not only did it give us the family travel adventures we yearn for, it literally did kick our butts – not so family-friendly word to go with the Franconia Notch bike path.

It wasn’t uphill the entire way, those hills were undulating so we knew what was going to happen on the way back.

The only thing that kept us cycling our legs and digging deep for breath was the beauty surrounding us.

Golden canopied leaves guiding us across wooden bridges, past snow covered mountain peaks, bubbling creeks, and small waterfalls shaping basins out of the rocky earth – that was our roadschooling lesson for the day.

Nothing like seeing water shaping rocks to learn about erosion and its power.

In our upcoming video, you’ll see Kalyra lying face down on the beach beside the lake where we decided it was time to quit.

We later found out we were just around the corner from the end.

But we couldn’t go any further.

We had moved the girls into their zone of discomfort – which is an okay place to hang out – but any further we would have pushed them into complete breakdown – going way beyond those safe boundary pushing zones.

The climb up those undulating hills on the way back were worrying me. My butt and thighs were holding up the “we’re staging a strike” sign.

“C’mon Kalyra. We’ve got no choice but to ride back honey.”

We turned back, in a matter of seconds, walking the bike up the first steep incline. Here we go.

Those undulating hills seemed to disappear. The speeds on the downhill giving us enough momentum to glide over them.

I barely touched the peddles. Even on the parts of the trail that on the way there seemed flat, I realized weren’t.

They only seemed that way because they weren’t as steep us the undulations. No wonder we were all feeling so wiped out. 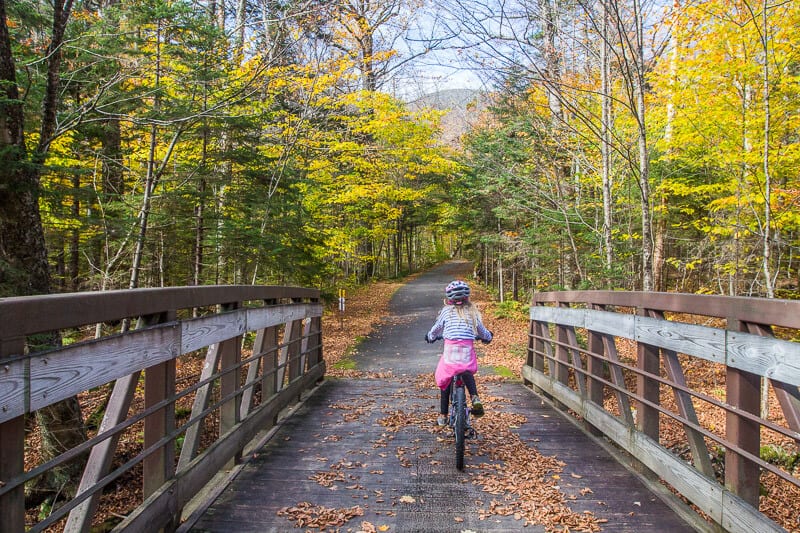 It took us less 20 minutes to get back. The journey there on that family friendly ride up took 90 minutes.

Little Savannah was slightly terrified in her tag-along on the back of Craig’s bike.

I was pretty scared for both my girls going down – we hit some speeds.

Craig was going as slow as he could and Savannah was steady on the back of the bike. And I was calling out my safety instructions to Kalyra on the way down.

“That was the best fun ever.” She cried when we pulled up to the car.

She totally forgot about the face down supine position she was in only 20 minutes before.

So had I. My body felt alive. It had worked hard and the end was spent with just us and the freezing cold 5 degree wind.

We jumped in the car to explore the remainder of the Franconia State Park bike path we didn’t get to, which was was when we discovered the other side of the lake where Kalyra collapsed was pretty much the end of what there was to see!

We took a loot at Old Man of the Mountain, which has the profile of a face when viewed from the north.

It was a series of five granite ledges on Cannon Mountain. It has been New Hampshire’s state emblem since 1945.

The Old Man of the Mountain collapsed in 2003. A memorial below Canon cliff along Profile Lake was built in 2010.

It’s quite an interesting concept.

There is a viewing platform with “Steel Profiles”, which, when aligned with the Cannon Cliff above, create what the profile looked like up on the cliff overlooking the Franconia Notch.

On the deck are various footprints depicting heights. You have to stand on the footprint that represents your height in order to see the profile correctly!

Slightly north of the Old Man, where we intended to finish our bike ride is Echo Lake which is the place to swim and kayak in the summer.

Later that evening as we played Clue with a bowl of tomato bisque and a cup of coffee, a Spotify ad came on talking about how learning happens so much better when it’s fun.

“Just like our day today girls. We didn’t have an official homeschooling day, but we were learning and having fun. What did we learn?”

“That you can’t have the fun without the hard climb.”

And how much more do you appreciate it when the yakka is hard?

If you want to do a family friendly White Mountain bike ride, I do suggest this one through Franconia Notch and the State Park.

Pack enough supplies, plan for at least half a day, and just enjoy the adventure!

If you want to see the beauty of the White Mountains and the famous Kancamagus Highway in the Fall press play in the video below.

P.S. Yakka is an Aussie word for work. Love my Aussie lingo! (which is Aussie for language)

Ever taken on more of a family friendly bike ride before ? What’s been your favourite? We’re always looking for more in the USA.