Jumping on the train and heading into Sydney is almost a weekly ritual for us. I always look forward to it, well, when the trains are on time.

From where we live on the Central Coast it’s a 75 minute journey and the benefits of living near one of the world’s best cities is never lost on me.

Usually it’s a family day out for us exploring new and old parts of the city, and Sydney is a great place to be no matter what the season or event.

But on this occasion I headed off solo without Caz and the kids and made my way to Circular Quay, the transport hub of Sydney harbour, to check out the Vivid Sydney Festival which comes alive after dark every May – June. 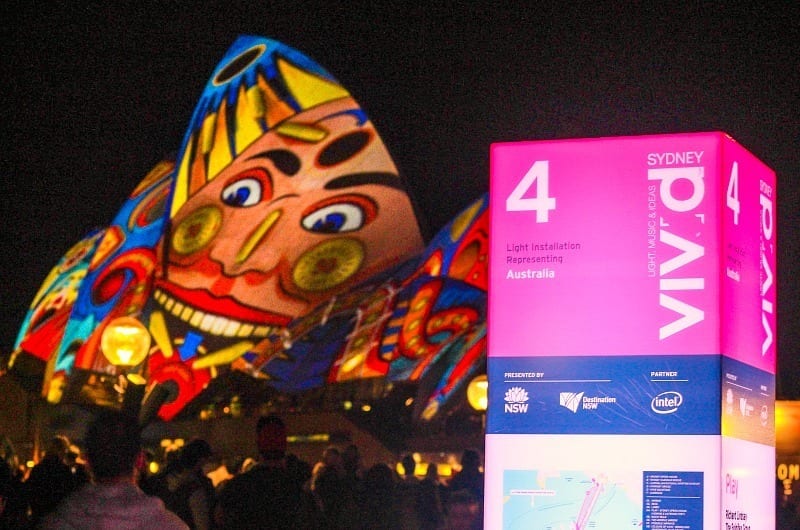 If you’ve been to Sydney before, or maybe even just admired from a distance through photos, you know that the back drop of this city is pretty damn good. It doesn’t need any touch ups or help, maybe just a blue sky thrown in to the mix.

Those famous landmarks built around circular quay such as the Opera House, the Harbour Bridge and the picturesque skyline make it a sight I Know I never tire of seeing.

But when darkness comes around and the Vivid Sydney Festival rolls into town, the addition of huge light projections and lasers transforms the city into one BIG canvas of light.

Vivid Sydney takes over the city after dark. It’s a unique annual event of light and music. It’s our annual Festival of Light.

Several buildings play a leading role including Customs House, the Museum of Contemporary Art and the Harbour Bridge as projections and music transform them into colourful spectacles.

But the star of the show remains the same. 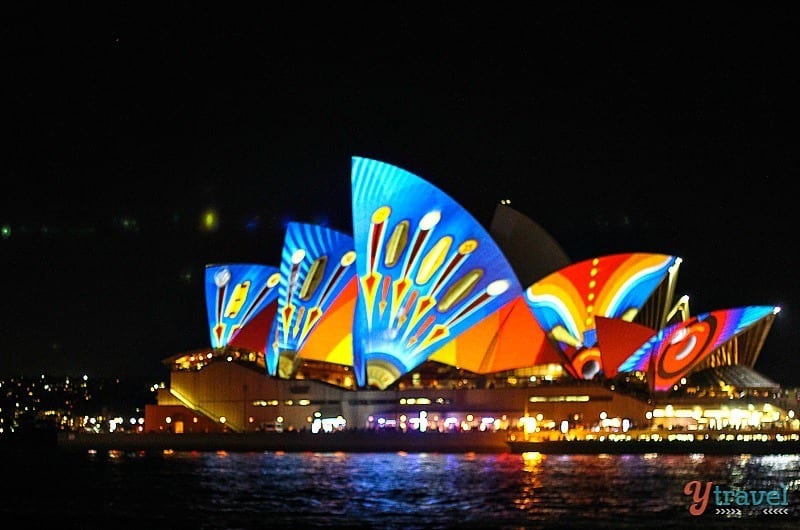 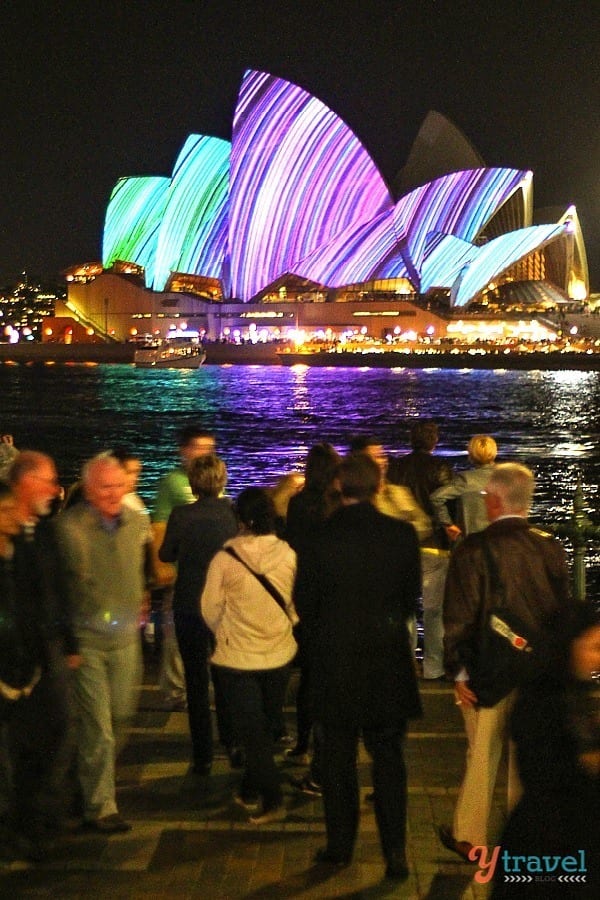 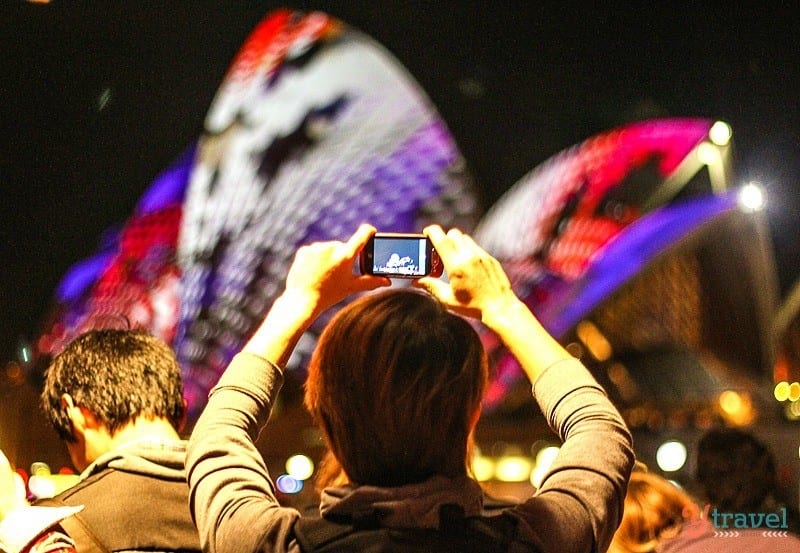 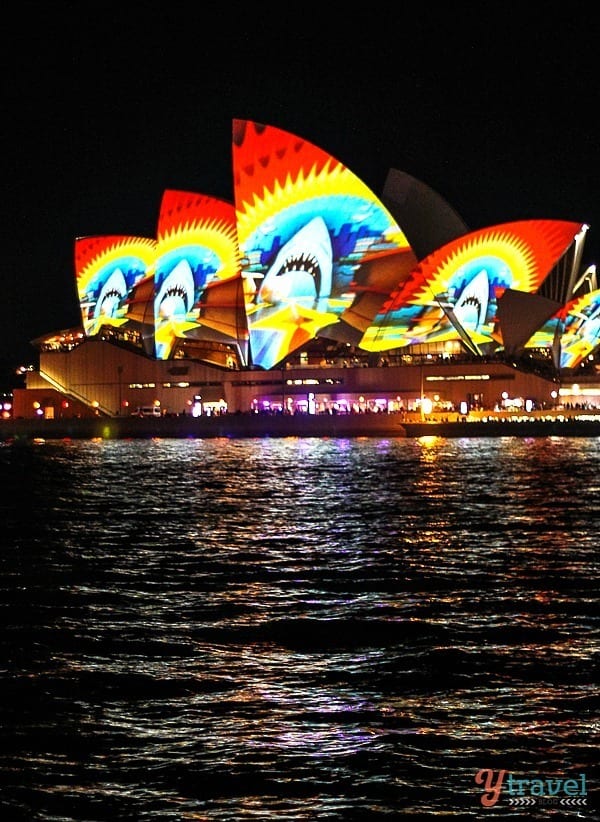 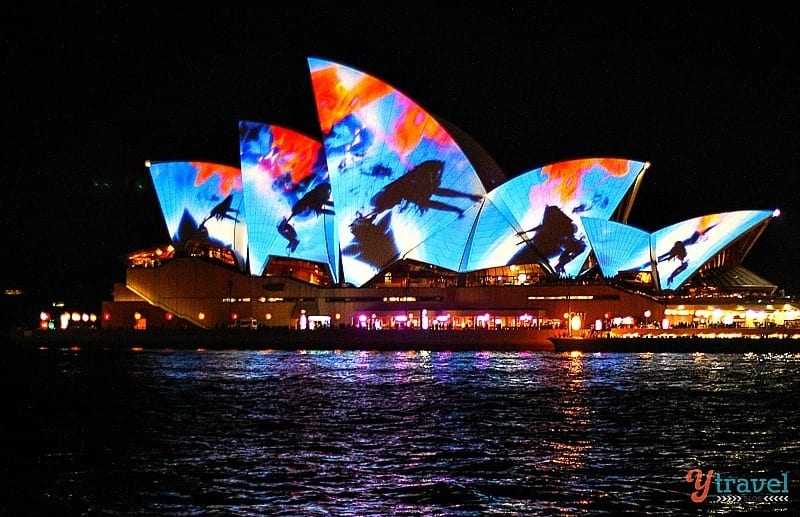 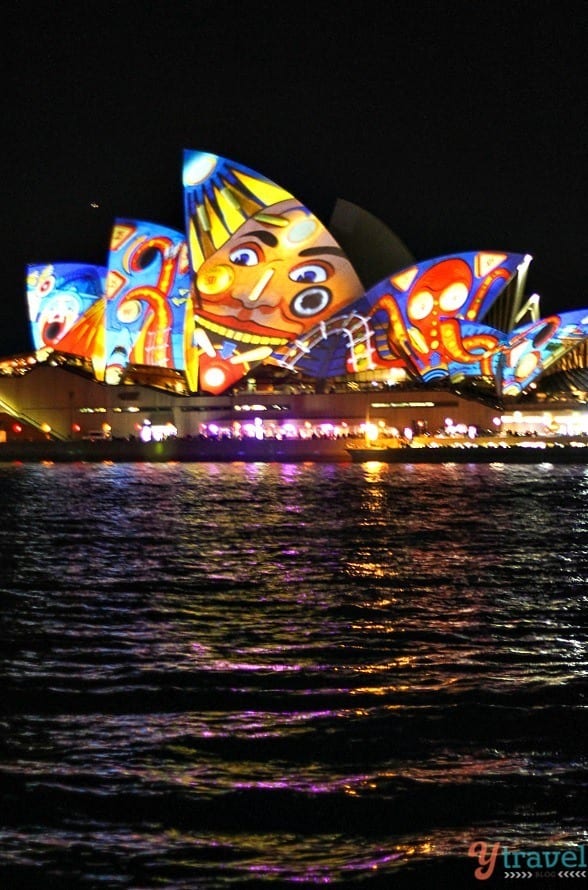 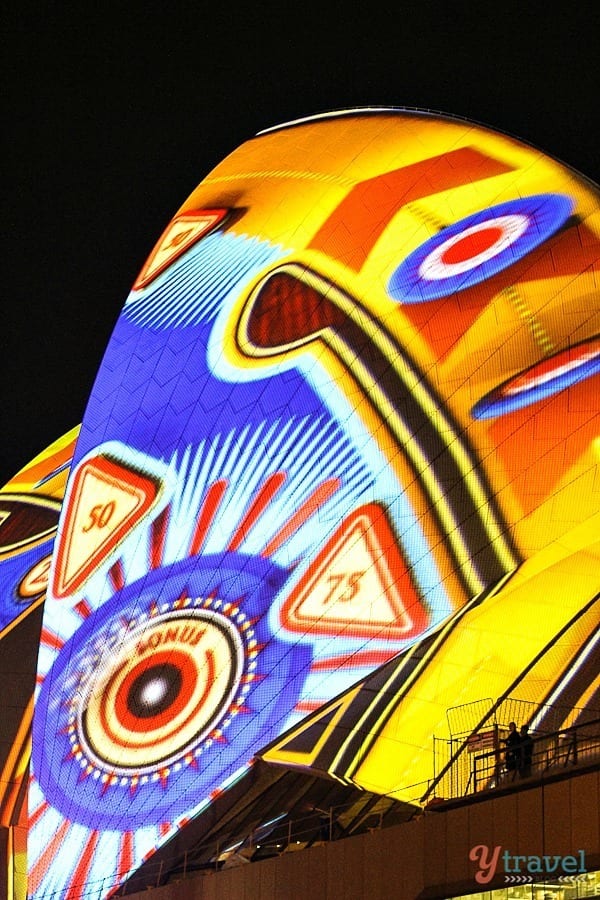 Backed by music tracks, the tiles covering the sails of the Opera House act as one big screen showing cool patterns, faces, AND even golf games. 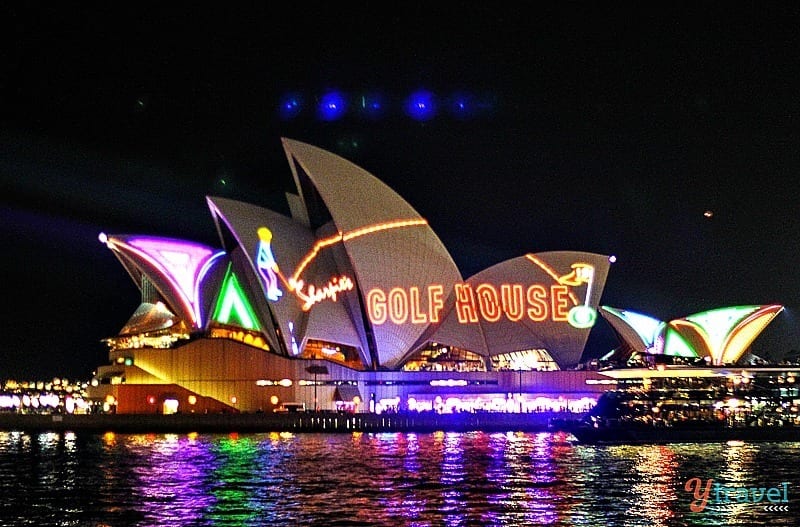 Expect to jostle a little with the crowd, it’s a very popular festival that runs for two weeks every May – June and is one of the best free things to do in Sydney throughout the year. Next time I’ll take the kids – it’s a fun family night out.

It’s cool to just wander the foreshore and check out all the free entertainment, local and international musicians, and creative light sculptures.

I was happy to see the resident didgeridoo player, who is a regular around circular quay, was a part of the festivities. 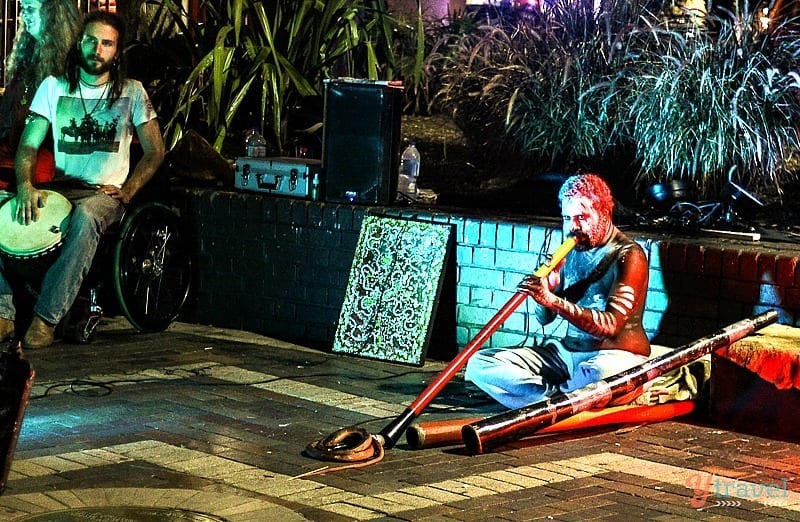 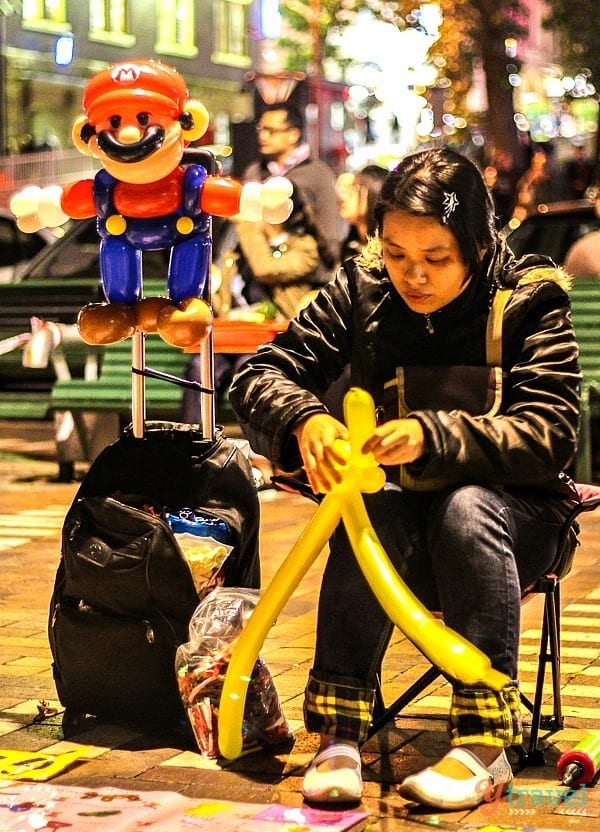 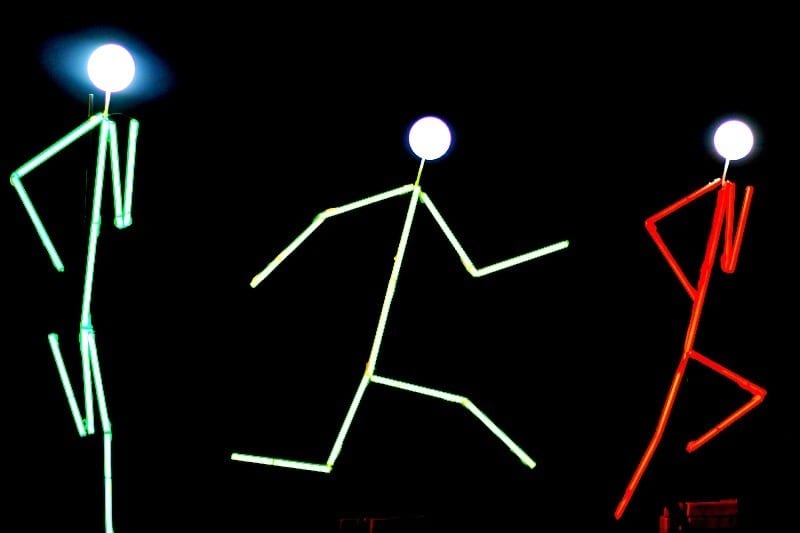 Even McDonald’s attended the party. 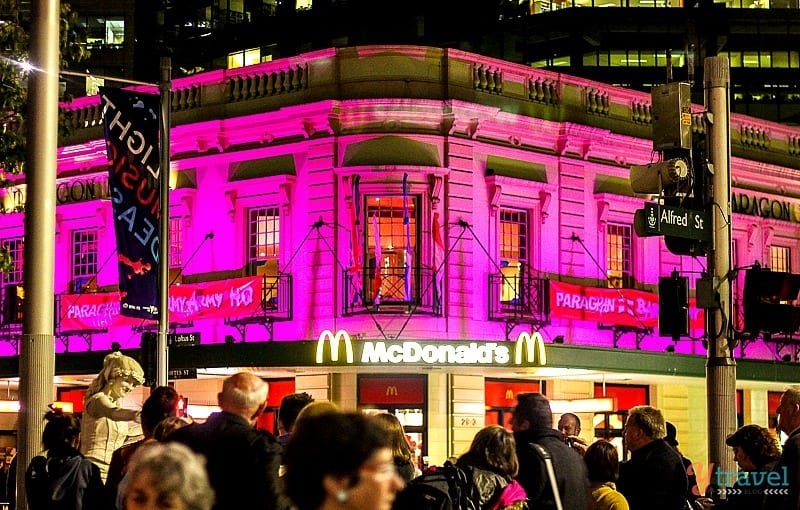 Vivid Sydney also has light projections, fountains and entertainment in the Darling Harbour precinct, but circular quay is where the real show is.

To get into the Quay your best bet is to do what I did and jump on a train (parking can be a nightmare in the CBD). Either get out at Circular Quay station or get off at Central and take a walk down George street.

So if you’re thinking of visiting Sydney in 2014 and will be here around the May/June period, consider timing your trip and adding this festival to your calendar. It gives you another great perspective on the harbour and the icons.

Vivid Sydney is an annual free festival that runs over two weeks at the end of May – early June. Get all the details on the website here. And if you want insider travel tips for Sydney check out our comprehensive city guide.
FacebookTwitterPinterest

13 thoughts on “Mesmerised by the lights at Vivid Sydney”