By Liz from L’appel du Vide

Jerusalem is a city divided. Claimed by four very distinct religious and cultural groups, the city is full of beauty, conflict and history.

As you walk around the old city you can’t help but feel that very brick is steeped in very powerful cultural significance.

And in no place is this cultural collusion more evident then at the Western Wall plaza where the Jewish Holy site of the Western Wall sits almost literally in the Shadow of the Islamic Dome of the Rock. 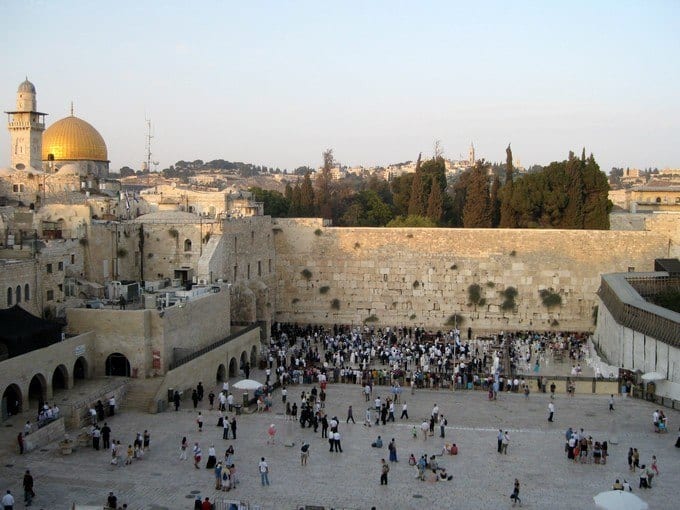 From this one location you can observe the site that two major world religions claim as holy in their own religious traditions – as well as the resulting uneasiness from sharing the sacred space. 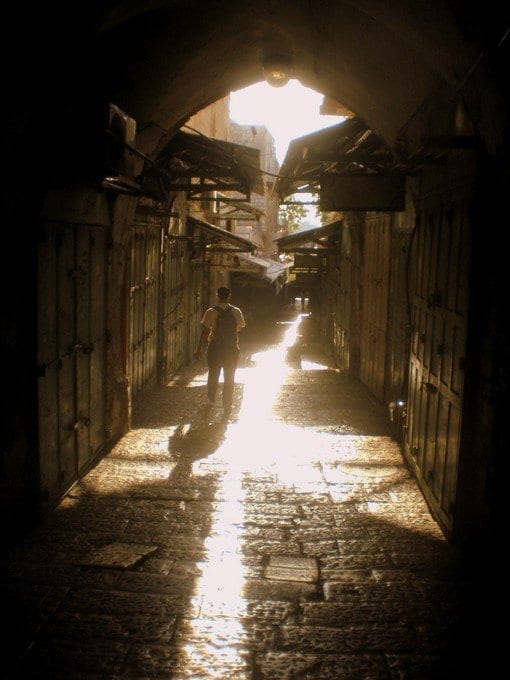 The Western Wall Plaza sits on the opposite end of the walled city from the main entrance, Jaffa Gate. To traverse the city you must wander through the winding souks and narrow alleys, but it’s not hard to find.

Everyone you ask knows where the Western Wall is and half the people are going there themselves.

You can’t just walk into the Western Wall plaza. Although entrance is free and open to anyone, you must first wait in the security line where your bags will be checked before you are sent through the metal detectors.

It’s a weird merging of old world and new world – official signs indicate that rabbis have determined that the use of these metal detectors do not violate Shabbat (a day in which use of electricity is forbidden). 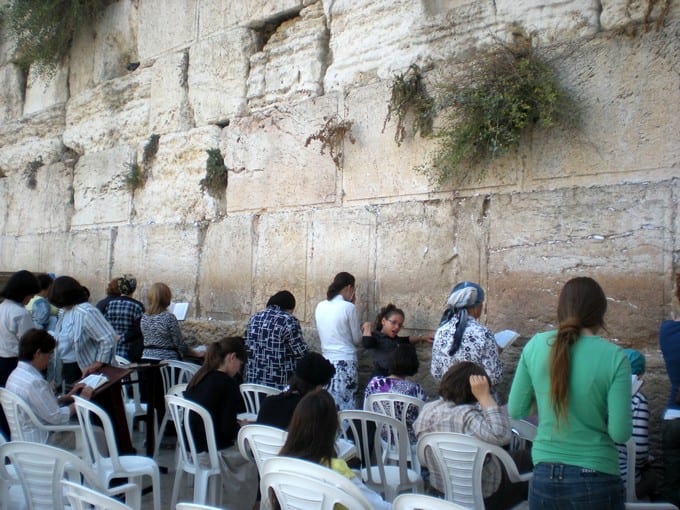 The Western Wall plaza is divided into three sections. One area is for observers, socializers and passerbyers, the other two closer to the wall are for prayer – one for men, and one much smaller area for women.

Visitors are allowed in the prayer area, but you must only enter your designated area. It’s important to be respectful of the religious significance of the site. Although picture taking seems to be tolerated, loud talking, laughing or other disruptions are not.

The religiously devout do not turn their backs on the wall, instead they slowly back away as they finish their prayers. 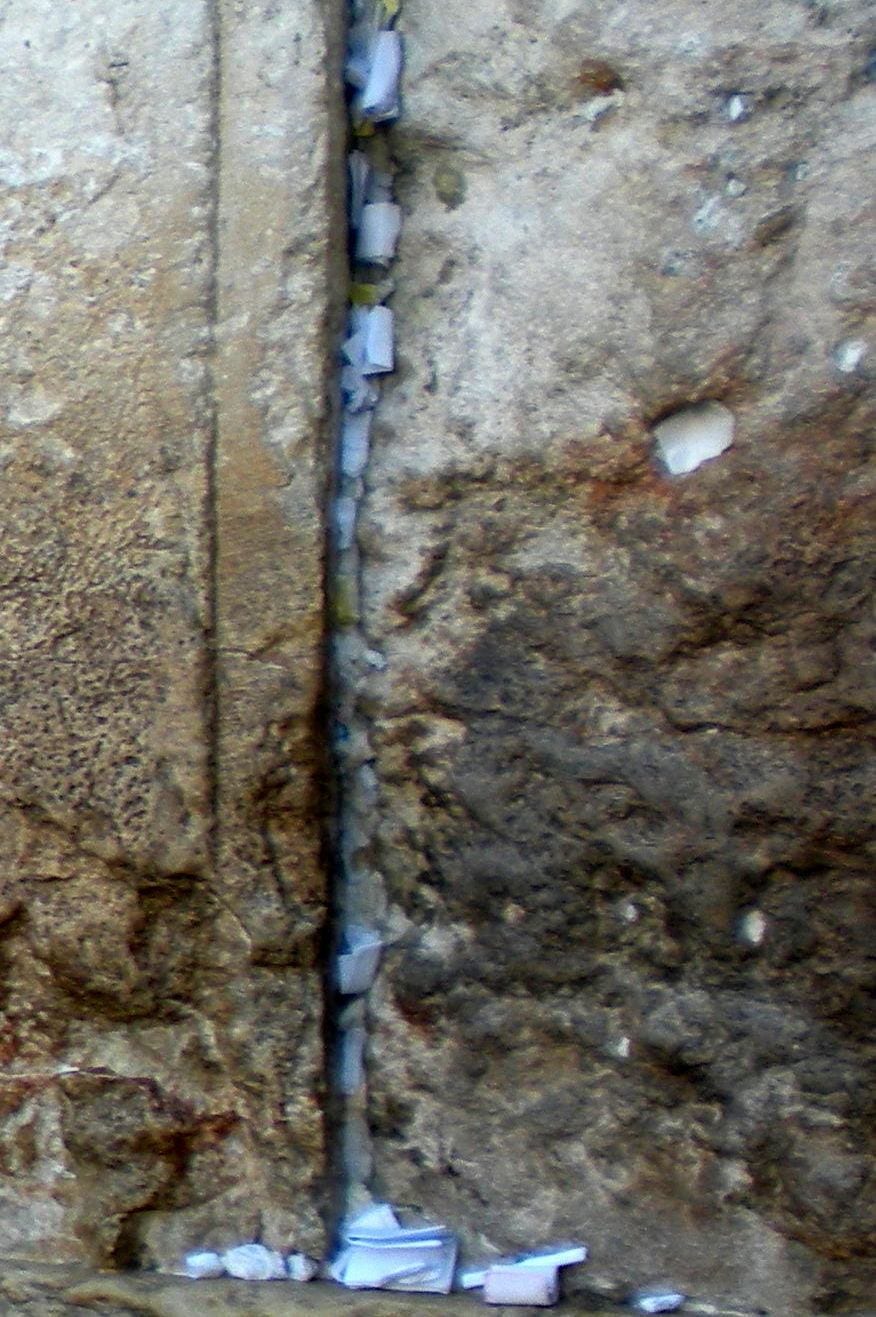 Another tradition of the Western Wall, is leaving prayers in notes in the cracks between the large stones. Hundreds upon thousands of these notes are stuck in every crevice.

At one point I saw a man prying the notes out with a long metal pole – I asked why they were being removed and was told that because of the many visitors, the notes must periodically be cleaned out. They are then buried along with other religious objects. 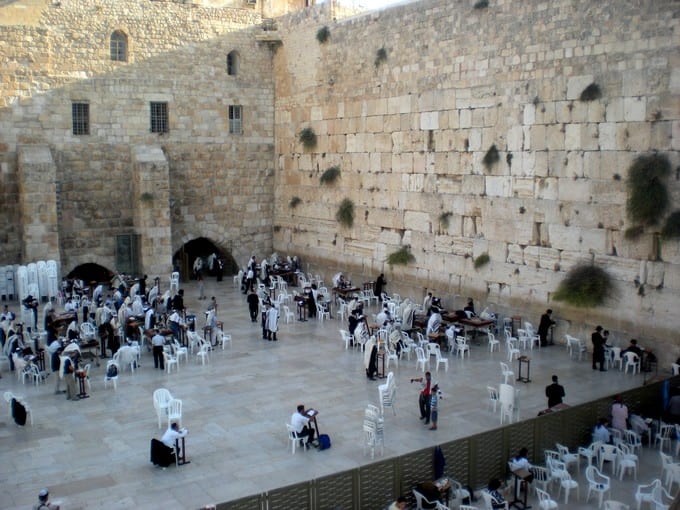 We got caught in our work out gear on the way to the City Wall Walk and were given modesty skirts to borrow as we walked through. 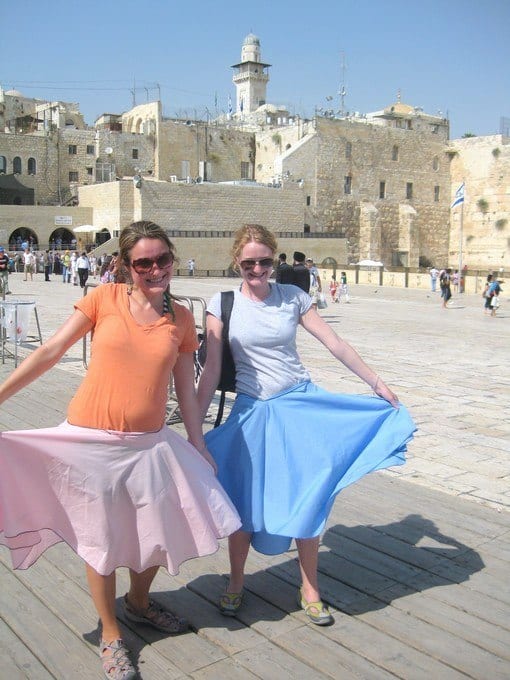 But visiting the wall section in the Plaza is only half the story.

The Wall is actually the remains of a retaining wall from the old Jewish Temple. Only a small portion if it is still exposed today. The rest is buried underground. Part of the underground wall has been excavated and it’s now possible to visit it via a guided tour.

Away from the light and the sounds of the Western Wall plaza, the ancient wall takes on a whole new significance. The stones tower over you as you walk through the narrow passages – passages which are filled with the faithful as they pray.

You must arrange the tours in advance online, but they are well worth it to see another side of the wall. The guides are all very knowledgeable about the religious significance and Jewish history surrounding the wall.

Liz is a 20-something living in Washington, D.C., and trying to see the world one country at a time. Right now she is only a part time traveler since she is still a full time “try and and make the rent”-er. Check out her blog  L’appel du Vide or follow her on twitter.