Games of Thrones (GOT) has been filmed all over the world, and in several other places in Croatia, but the outer walls of Dubrovnik look as if they were built for this TV series.

With many GOT locations, a visit could leave you underwhelmed, since the places look nothing like their souped up, graphics -enhanced versions on the show.

Yet the spots in Dubrovnik and the old town walls itself are very recognizable.

The old town has enough history and beauty to occupy anyone happily for a couple of days.

Below are my top things to do in Dubrovnik, part of my 2-week itinerary for Croatia this summer.

Things to do in Dubrovnik

The Walls of Dubrovnik

The Big fountain of Onofrio. This is an important part of the city’s original water supply system that carried water from the Dubrovacka river.

You can also experience a guided tour which will provide historical knowledge, incredible panoramic views and a walking tour throughout Dubrovnik old town. Click here to claim your tickets.

The whole city of Dubrovnik, Croatia was enclosed with walls in the 13th century, that were extended up until the 17th century.

With numerous additions and modifications throughout their history, the walls of Dubrovnik are amongst the greatest fortification systems of the Middle Ages, and one of the biggest Dubrovnik attractions.

Take the entrance on the Stradun from the side of Pile gate right in front of the Big fountain, to buy tickets for the walls. We started at about 0830, and it felt hot on a mid-June morning.

In the warmer months of July and August, a walk in the evening might be better, but then you would have to jostle for space with more people.

Even starting with high expectations, the views of the Adriatic Sea and the old city spread below, takes your breath away, and it’s one of the best things to do in Dubrovnik.

The old town spread below, with Revelin Fortress at one end, and Lokrum island in the distance. You come upon gems like these, from the ‘windows’ within the thick walls.

Where to Stay in Dubrovnik 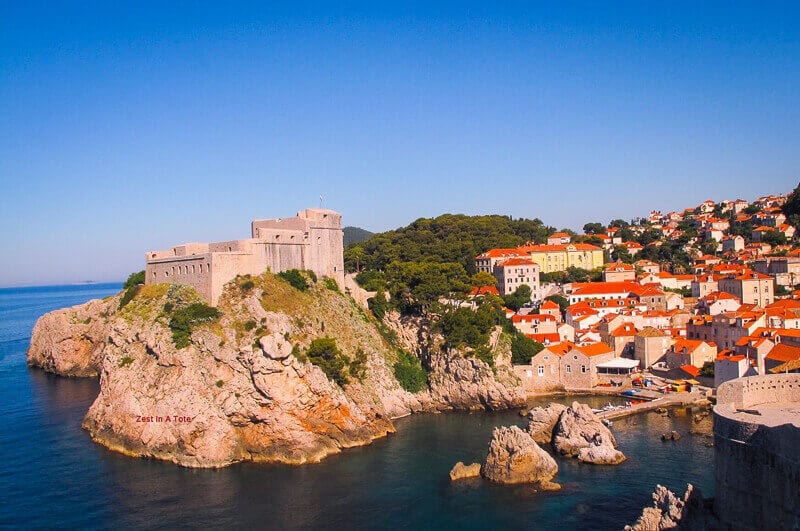 If you walk outside Pile gate, towards St. Lawrence Fortress and take the steps down to the sea, you would see several colorful kayaks floating around.

There are at least seven or eight companies that run kayaking tours around Dubrovnik, and we were very happy with our choice of Adventure Dalmatia.

Adventure Dalmatia offers tours both in the morning and in the evening.

Depending on how fit you are, the 2.5 hr kayaking tour will leave you exhilarated or exhausted, but very likely both – and we had the additional pleasure of the six-year-old plonked in the middle of the kayak.

Somewhere along the way, my arms just gave up. Which was not great news for my husband who had to then propel the three of us around.

The daughter’s constructive feedback did not help,

“Papa, we are the slowest, why aren’t you going faster? It’s not difficult, all you have to do is move your arms faster”

Exertion apart, this was another one of the best things to do in Dubrovnik, Croatia.

It was a great way to get up close and personal with the Adriatic Sea, see the walls from outside, see some of the spots around the old town including the Lokrum island and get the adrenaline going.

The biggest plus, though, came from our guides Frank and Eric, who kept up a very interesting narrative of the town, the country, and, of course, GOT.

We first rowed towards the Lazareti – a series of interconnected buildings located outside the old city harbour.

Home today to a variety of local cultural groups, the Lazareti complex was built as a quarantine facility, to protect the Republic against diseases that ravaged Europe in the middle ages.

Further on, from a distance we saw the now derelict and abandoned Hotel Belvedere – once a luxury hotel that was destroyed in the Croatian War of Independence.

Below are other recommended tours and Dubrovnik attractions from our partners at Get Your Guide.

The combat battle scene between The Mountain and Oberyn in Season 4 of Game of Thrones was filmed at Hotel Belvedere. Frank mentioned that it is home to more than 100 cats; and you are welcome to take any cat home for free!

We took a half hour stop in a cove, where many people from other tour groups were cliff jumping, swimming, and snorkeling.

Too many people in that space for my liking, but the stop set us up well for the hard rowing needed to circle around Lokrum island.

We took a brief detour into another cove, smelling to high heavens with perhaps what was bird poop.

Frank offered (jokingly) a million dollars to anyone who could tell the group what the cove was used for.

All of us were left gaping, when my 6-year old, perched on the kayak between my husband and me, piped up, “For the fisherman to get protection during sea storms.” Slow clap!

Despite the need to catch our breath, we couldn’t wait to get out of the smelly cove.

Bring your own sunscreen and camera for the kayak tour.

Adventure Dalmatia does give a small plastic jar that can keep your camera and shades dry. There is also a large dry-bag available with them, for all your valuables.

The monastery’s solid stone walls transport you instantly from the hustle and bustle on the Placa to the medieval times.

Enclosed within is a mid-14th-century cloister, a historic pharmacy and a small museum.

The cloister is one of the most beautiful late-Romanesque structures in Dalmatia.

My daughter was very curious about the exhibits in the pharmacy.

There are a variety of weights and measures, of all sizes, the ceramic bottles with potions inside, some old manuscripts with perhaps recipes for making medicines.

No photos inside the pharmacy or the museum are allowed.

Going Up the Srd Hill Dubrovnik

Mount Srd gives a unique view of the old town and the surrounding areas.

The top of the hill can be reached via the Dubrovnik cable car (you could hike up the hill as well, there is an unmarked path).

Don’t be in too much of a panic to start clicking your camera in the cable car, there are enough and better opportunities for that from the panoramic terrace above, and from the Imperial fortress roof.

Just enjoy the city’s walls give way to reveal the picturesque Adriatic coastline and its many islands.

Once you have had your fill of the spectacular panoramas, visit the Imperial Fortress.

Napoleon Bonaparte was the first to spot the defensive potential of Srd hill. He began construction of Fort Imperial in 1806, soon after Dubrovnik capitulated to French rule, and completed it in 1812.

The Austrians took possession of Dubrovnik in 1815 and set about expanding the fort. The fort fell into disuse until the attack on Dubrovnik in 1991.

A section of the Fortress on the ground floor hosts the museum of the Croatian War for Independence. According to the ticket-vendor there, it has around 500 showpieces from the period 1991 to 1995.

The Fortress now hosts the exhibition – Dubrovnik in Homeland War. It is well worth a visit.

There is good video material covering the Homeland war, and we would have liked to see the whole documentary, except that in the middle, the scenes were inappropriate for my 6-year-old.

After the panoramic views, this museum does put you in a sombre mood.

To experience Dubrovnik old town when only cats are afoot and garbage collectors are busy cleaning the city, wake up early.

There were a couple of enthusiastic photographers when I went at about 6:30 am.

Dubrovnik Cathedral Rolling our suitcases to step out of the Ploce gate at 450 am, to catch the flight back home, I looked back at this beautiful old town resting.

Old town Dubrovnik is touristy and clichéd in parts, but always entertaining, and one of the popular things to do in Dubrovnik.

The evening vibe in the lively cafes and bars is thoroughly enjoyable.

When you visit Dubrovnik, do stay a night in the old town and let its charm wash over you.

After two weeks, we were up for trying some Indian food, even in Europe.

We got into a restaurant named ‘Taj Mahal’ and did a double take looking at the menu.

Taj Mahal restaurant, despite its name, serves finger-licking Bosnian cuisine. If you want a change from Dalmatian or Italian cooking, head here.

Another memorable experience was at the Troubadour jazz cafe, with great music and nice cocktails, perfect for a lively evening.

This was a short distance from our apartment, so around 10 pm, when my daughter just couldn’t stay up, we were ok to get her in bed and come back for some more music.

If you want to linger on the Srd hill, dining at Panorama restaurant is a good option. You cannot beat this combination of good food with picturesque views of Dubrovnik, the Adriatic Sea and its islands.

Stradun is a great place to sit in a café if people-watching is your thing. And Poklisar is a good spot for a leisurely lunch or dinner, where you can sit facing the port and watch the boats.

Planning a Trip to Dubrovnik

Shweta runs her own travel blog at zestinatote.com. Her focus is on Family & Luxury Travel - destinations, luxury stays, tips on family travel. You can follow her by checking out her Facebook and Instagram.