We have seen plenty of stalagmites and stalactites in caverns and caves all over the world, so I was uncertain as to just how good the Luray Caverns in Virginia would be.

They are the largest and most popular caverns in the Eastern USA, so I was worried how its popularity may have diminished their value.

I did not need to worry. It’s popular for a reason. The Luray Caverns are possibly the best I’ve ever seen.

I was stunned by the pristine condition and the abundance of stalagmites and stalactites formations, full-length draperies, huge columns, and dazzling mirror pools that this ancient caved has formed over millions of years.

It was enchanting and now has the y Travel approval as a top USA attraction.

We visited the Luray Caverns as part of our Shenandoah Valley road trip with kids. What makes this an extra wonderful place to visit in the Southeast USA is its close proximity to The Shenandoah National Park, and the famous national scenic Byway: The Skyline Drive.

You can see those places in our post on things to do in the Shenandoah Valley to incorporate into your trip.

As with our recent exploration of Ruby Falls in Chattanooga, the thing that captured my awe was the discovery of these caves.

Imagine being the first to stumble upon them?

Well, that happened to the local men who discovered the Luray Caverns on August 13, 1878. Andrew Campbell, William Campbell, and Benton Stebbins.

They had an inkling that caverns were in the area due to the karst topography (limestone and dolomite sedimentary rock deposits). After feeling an odd, cool breeze originating from a depression on the hillside, they began digging at it.

Five hours later, Andrew Campbell and entered the caverns by sliding down into it. Their first sight was what would be dubbed the Washington Column, named after the first president of the United States.

Little did they know the rest of the beauty they were about to discover. Such beauty that has received world-class recognition and dubbed, “Geology’s Fall of Fame”.

The A Smithsonian Institution report of July 13 and 14, 1880, concluded: “It is safe to say that there is probably no other cave in the world more completely and profusely decorated with stalactite and stalagmite ornamentation than that of Luray.”

And National Geographic has said the draperies found at Luray at some of the “best in the world”.

Luray Caverns was designated a Registered Natural Landmark in 1974. This designation offers protection to this natural wonder forbidding the creation of any further embellishments (like the Fried Eggs and Organ created before this protection). It also means it can’t have any colored lights and exploration only on designated paths of which wind through only a third of the cave (what must lie beyond here?)

The first Grand Illumination of Luray Caverns occurred on November 9, 1878. This top Virginia attraction has been open every day since and attracts 500,000 people each year.

Paved and well-lit pathways lead you throughout the caverns that are 60 acres in size and reach 10 stories high. The easy trail is 1.25 miles and took us about an hour with all our gawking stops.

The tour is self-guided, and you are given a booklet with your ticket that lists the various attractions in Luray Caves given you information on each one.

Savannah stopped at every self-guided number to enthusiastically read each description. She was mesmerized by the magic of these formations that take 120 years to form just a cubic inch.

(Note: I have seen mentions of guided tours. There were none running when we visited, and I cannot see anything on their website in regards to this. Perhaps, because of COVID they are no longer running. I would love to do a guided tour so I can take in more stories of the caverns.)

Despite their popularity, the caverns say that they never run out of space. So, therefore it is not necessary to book ahead. There are no timed entries and you can enter as soon as you get your ticket.

The temperature in the caverns is around 54 degrees Fahrenheit, although with the humidity, feels warmer. I had a tank top on and didn’t feel cold once. We visited in summer. I’m sure winter is a different so come prepared with warm clothes.

The self-guided tour gives information on 19 stops. Each are incredible and worth spending time looking at.

Here are just a few of the Luray Cavern Highlights for us:

Dream Lake is the most exquisite attraction in Luray Caverns. It’s the most stunning optical illusion and one you’ll never forget.

The stalactites on the ceiling are mirrored perfectly onto the flat surface below, creating the illusion of thousands of stalagmites rising up from the floor to reach to reach up to them.

It’s an illusion so real that you cannot see the real bottom of the lake, even though it’s only about 20 inches at its deepest point.

It’s one of the first stops on the tour and the point where I said, “Okay, well seeing this has made this tour worth it alone.”

The Giant Redwood is the oldest and biggest formation in the caverns. This huge piece of flowstone is 40 feet high and 120 feet in circumference. As flowstone takes 300 years to form one inch, it is estimated to be over 7 million years old!

It’s just as magnificent as the trees it is named after.

This is where we find National Geographic’s best example of draperies in the world. It’s definitely the best example I have seen of these flowing delicate curtain formations.

The Giant’s Hall is the deepest part of the caverns (164 ft below the surface of the earth) and has the largest airspace of any room in the caverns.

My favorite formation in here was the Double Column, the tallest formation in the cavern at 47ft high. On the front side is a stalactite reaching all the way to the floor from the ceiling.

Beside it, on the back side, is a stalagmite formed from the floor reaching almost to the ceiling. They do not meet but are joined side by side.

I was fascinated by the Fallen Stalactite shaken off the ceiling by an earthquake 7,000 years ago. It was gigantic and sent a little nervous shiver through me thinking of earthquakes shaking up this cave. Don’t fear, this was the last disturbance of this magnitude!

I found the Wishing Well fascinating, although I’m unsure of any damage it may do to the caves. I asked the ranger who said it doesn’t and is protected to ensure this.

It’s a beautiful crystal clear green pond – the deepest body of water in the caverns with a depth of six feet.

It’s popular for wish seekers to throw money in the pond. At the end of the year, two to three feet of coins will cover the pool. We saw plenty of notes as well, including $100 bills.

One positive is that the money is collected annually and donated to environmental and educational organizations. Over a million dollars has been collected over the years.

The Cathedral and Great Stalacpipe Organ

I loved envisioning the occasional dances that were held in the huge chamber called the Cathedral, (once known as the ballroom.)

It is here you’ll also find the Great Stalacpipe Organ, the largest musical instrument in the world, which uses the stalactites as tone sources. It’s meant to play at various times throughout the day, but I never heard it.

I was a bit nonplussed about this part of the tour, whereas for others it will be a highlight.

Other things to do at Luray Caverns

In addition to the Luray Caverns tour, your ticket entitles you to several other perks.

This museum shares more about the Shenandoah Valley with artifacts dating from the 1750s up to the 1920s. TI’s a gateway to how life was lived o the frontier’s edge.

Car lovers will enjoy the vehicle exhibits that range a pre-Civil War bicycle, the oldest carriage on the continent and an 1897 Mercedes-Benz, one of the oldest cars in the country still in operating condition.

This is a toy museum that displays thousands of historic toys and trains making it a favorite for kids.

The tour finishes in the Luray Caverns Store, which has locally produced products such as jams, candies, and Virginia wine.

There are two separately ticketed attractions the kids will love. The Rope Adventure Park consists of three levels so the children can climb according to their ability, comfort, and confidence. The Garden Maze is where the whole family will enjoy getting lost together!

Things to do near Luray Caverns

Where is the Shenandoah Valley?

The Shenandoah Valley is sandwiched between the spectacular Blue Ridge Mountains to the east and the Alleghenies to the West.

It stretches approximately 200 miles from Harpers Ferry, West Virginia to Roanoke, Virginia and is about two hours west of Washington D.C and two and a half hours from Richmond. 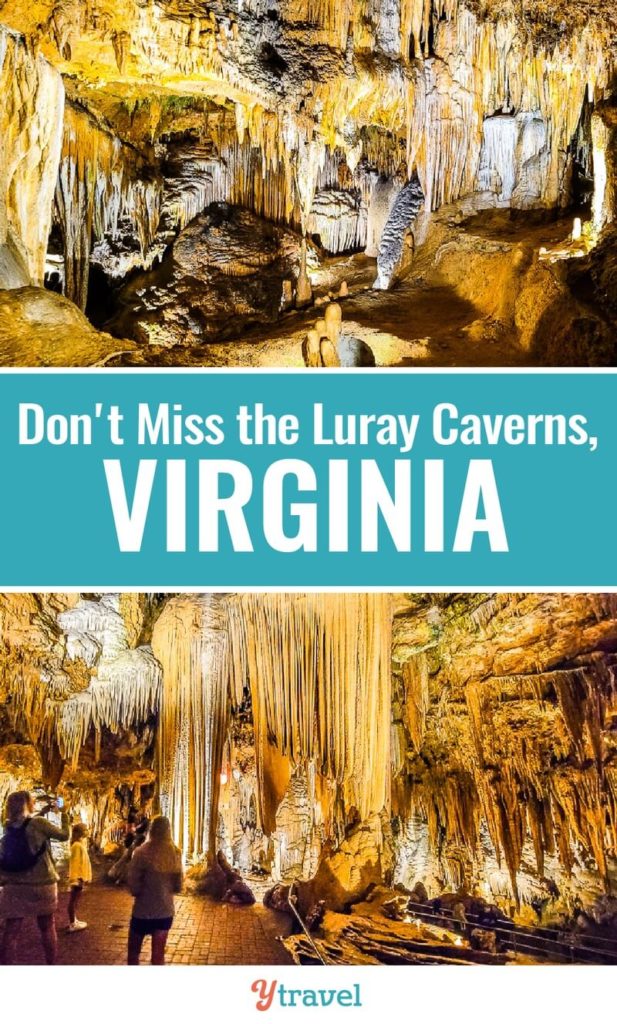 7 thoughts on “A Visit to Luray Caverns, Virginia: Geology’s Hall of Fame”