We have visited London many times on our travels and Caz even lived there for two and a half years from 1997-99 on a UK Working Holiday Visa.

London has so much going for it.

Amazing history, great vibrancy, and an energy to rival any major city around the world. It’s also a great base for exploring the rest of the UK and Europe.

So what is it about London that keeps us going back? Below are our highlights of things to do in London, PLUS, some tips from our Facebook community members.

Located in the heart of the West End, Covent Garden is a popular shopping and leisure site.

Enjoy the wonderful street performers that entertain and the local street market. It’s amazing and you can easily spend the whole day there.

Whilst there grab a drink at the popular and original Belushi’s Cocktail Bar from Blue’s Brothers fame.

Caz could be regularly found here sipping on jugs of Thunder Trousers. And the Punch and Judy Pub is one of London’s most iconic pubs with an upper floor balcony, which is particularly good in summer especially for people watching.

One of our favorite days out is heading to Camden Town in North West London.

It’s a sea of entertainment and overflows with a variety of open-air and indoor markets, shops, restaurants, bars, pubs, clubs, theatres and cinemas.

There are great deals to be had, and the people watching is first class. The town attracts enormous crowds of Londoners and tourists alike and there is always something happening.

Sunday, in particular, is a great day for visiting the markets and stopping into one of its many pubs for an afternoon beverage.

St. James’s Park is the oldest Royal Park in London and offers one of the best views of Buckingham Palace. It’s very green and is also surrounded by Westminster Palace and St James Palace.

It’s quite a pleasant walk from Parliament to Buckingham Palace through this park on the way.

Hyde Park and Kensington Gardens are side by side and are enormous and include the ever popular Diana Memorial Playground and the Peter Pan Statue.

Changing of the Guard

A visit to London is not really complete without seeing this military tradition.

The Queen’s Guard in London changes in the Forecourt inside the gates of Buckingham Palace at 11.30am every day in the summer and every other day in the winter. Try to get there early and view the spectacle from outside the front gates.

Trafalgar Square is the largest square in London and one of its most well-known areas.

It’s an iconic square with many sights including Nelson’s Column, the National Gallery, and many other statues and sculptures.

It plays the role of both a tourist attraction and the main focus for political demonstrations.

The square is famous for its pigeons, but their population has dropped since measures were put in place as they were considered a health hazard.

It is also the place where you catch the night buses after the last tube has left and you missed it because you were too busy with that last pint in the pub. You should see how busy it is down there then.

This 700-year-old building in the heart of London is a must see.

It is steeped in British history having played host to many Royal weddings, including the most recent of Prince William to Kate Middleton.

It’s the final resting place of seventeen monarchs and is a very impressive looking Gothic building with stained glass. It really is beautiful both inside and out and worthy of a visit.

Click here to get your tickets to the Abbey.

It’s a classic photo opportunity: have your photo taken standing on the Prime Meridian Line at Greenwich.

Head up the hill to The Royal Observatory and in the courtyard is a metal strip where you stand over the line and can be in the eastern and western hemispheres at the same time.

You can get to Greenwich easily by train or bus, or by taking a boat down the Thames.

For the best experience, go by river, weather permitting, and return by rail.

Not only will your children enjoy the boat ride, but you’ll get to see the London Eye, St Paul’s Cathedral, Shakespeare’s Globe, The Tower of London and Tower Bridge.

You’ll be traveling the Thames – the historic water highway from London – as royalty have traveled to Greenwich for hundreds of years.

Also, arriving by river puts you in the perfect position to begin exploring Greenwich.

By water, the trip is about 30-60 minutes each way. You can get on board sightseeing cruises at Waterloo Millennium, Westminster and Tower piers.

Greenwich has many attractions; the Royal Observatory, the National Maritime Museum, Cutty Sark, Gypsy Moth and Greenwich Market are just a few.

It has some outstanding pubs too, and the Trafalgar is one of them. This magnificent Regency style pub was built in 1837, the year Queen Victoria came to the throne.

Buckingham Palace is Queen Elizabeth II’s official residence and has been the official London residence of Britain’s sovereign since 1837.

We recommend you visit the royal State Rooms and marvel at sculptures, paintings and intricate English furniture. Click here for tickets.

Buckingham Palace operates a timed-ticket system, with admission every 15 minutes throughout the day. Tickets are valid only on the date and at the entrance time specified on the ticket. Regrettably, latecomers cannot be admitted.

Notting Hill, made famous by the movie featuring Julia Roberts and Hugh Grant, but always well known by Londoners, is a district to watch the cosmopolitan world go by in one of its coffee shops, before some high-end shopping or more of an alternative feel at nearby Portobello Markets.

The best way to experience Notting Hill is at the very popular “Caribbean style” Notting Hill Carnival held every August.

A fave day out for Caz was to take the tube to Richmond and walk along the Thames River and have a beer or two.

The walk through Richmond town centre, along the river and up Richmond Hill to the park is very beautiful and you’ll soon see why for hundreds of years it has been a favourite retreat of Royalty, the rich and the famous.

The frontage around Richmond Bridge has plenty of cafes and pubs for you to enjoy some quiet riverside life. The area is also close to Royal parks and historic houses, theatres, museums, and galleries.

Brave this famous shopping district of London if you dare.

Be prepared for crowds so thick you will need heavily greased elbows to plough your way through. If you like shopping though, you’ll love the high-end stores that line this one and a half mile shopping mecca.

It is really hard to recommend pubs in London as there are so many of them and so many that are great. I’ve just chosen a few of my favourite, frequently visited watering holes for you to check out.

Waxy’s is one of our fave bars to go for its warm atmosphere and quirky decor. It is a labyrinth of 4 unique bars covering 6 levels all linked together by a maze of staircases and passages.

Spend time in the tree room and be transported into a magical pixie land sitting amongst tree branches and tree trunks carved into seating area. And the beer selection is pretty good though. Come early as this place gets packed.

Not usually on the tourist trail, this pub is housed in an old restored church.

The building  is beautiful inside and out. The architecture makes for amazing acoustics for their live music sessions. Used to be a favourite night out for Caz’s travelling household.

Have a pint on a boat on the River Thames

I was originally going to recommend the Queen Mary, but have sadly discovered she has been moved.

As soon as the sun came out in London, you could guarantee our lively group would head down to the Queen Mary moored on the Thames at Embankment for a pint of snakebite or two in the sun.

It was a great day and sometimes night out.  Truly worth it.

Get your tickets for the River Thames cruise.

When I lived in London, the Walkabout was called the Outback and there was only one of them in Covent Garden.

Another antipodean place, which does draw in visitors from all over the world, it is a great place to get your Down Under fix, listen to live music and have lots of fun with fellow travellers.

Try it if you dare. There are over 30 stops on the Circle Line. Get off at each stop and head for the nearest pub.

Drink only half a pint (believe me by stop 5 you’ll realize why) and then move to the next one. Caz did it with a big group and made it even more fun by creating rules for each pub.

If you broke the rule you had another drink. Just see if you can make it thee whole way round, we certainly did not.

Weatherspoon pubs are scattered throughout the entire city (and country). These pubs don’t always have the most happening vibe and atmosphere, but they do have really cheap food and drink.

For those on a budget you might find yourself gravitating to these pubs for a cheap night out.

The South Bank area has many of the famous landmarks you would wish to see on a trip to London, including the London Eye and the Tate Modern, along this stretch of the River Thames, from Westminster Bridge to London Bridge.

The Houses of Parliament 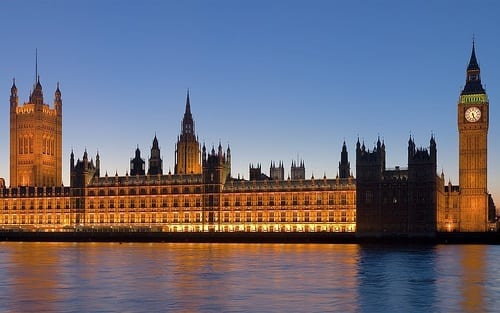 The Houses of Parliament are only a short walk down Whitehall from Trafalgar Square to Parliament Square.
The building is stunning from Parliament Square, but it’s worth taking a walk over Westminster Bridge and getting the view from the South Bank.
Note:
Big Ben is actually the name of the bell in the clock tower (St. Stephen’s Tower), which chimes every 15 minutes.

If you can somehow find your way inside a good place to have a drink is the bars from within the houses of Parliament. Caz knew someone who worked in there and was able to sneak her in for a few with the toffs. A great experience.

Below are tips from members of our facebook fan page:

Plan Your Trip to London