Welcome – come on in! When I am in Cyprus,Greece this is my office. 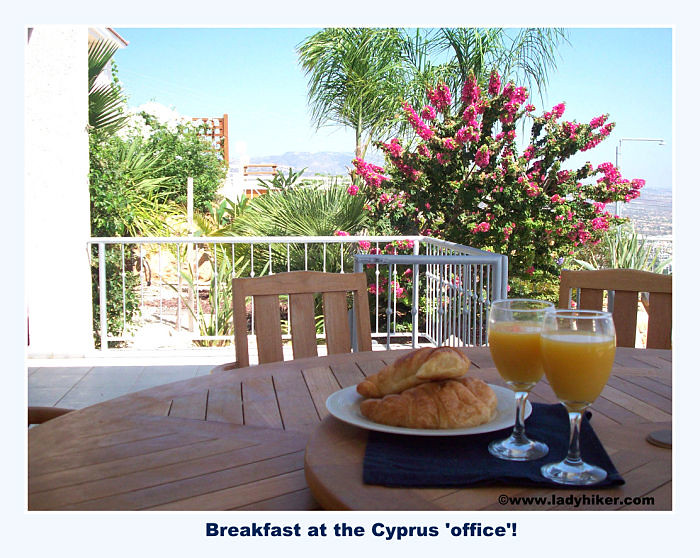 Spending more than six months of every year in Cyprus was never really in the game plan until we stood sliding into the ruts on a crumbling cliffside outside the tiny village of Peyia.

The agent was convincing; this spot, apparently, was just crying out for a house. So one rash decision later (the heart ruled) we had agreed to the building of a Mediterranean villa on this hard-baked plot of earth.

Have we regretted it? Sometimes, yes. It all comes down to mindset. The most important piece of advice I could offer on becoming an expat (of sorts) is that it’s vital to adapt. Do not fight the system.

And really – why should the locals change their ways for you?

Trying to impose your lifestyle from your native country in your new home is a recipe for disaster. Within reason embrace the culture and if your destination is the Mediterranean then adjust your idea of time.

“Tomorrow” may indeed mean just that – but it can equally mean “next week” or “soon”. Incredibly frustrating if you’re clinging on to your own inbuilt ideals of efficiency.

We, of course, learnt the hard way. With rages and occasional tears as we struggled to understand “the way things were done”. The biggest problems seemed to stem from the fact we never really knew when anything would happen. If we’d arranged for a workman to call, or a furniture delivery – who knew when…?

I seem to remember (see – it’s fading already!) that our most frustrating experiences arose with frequent water and power cuts. Once we relented and decided to go with the flow, we began to enjoy ourselves and could appreciate that there are, in fact, many acceptable ways of reaching the same goal.

Water cuts? No problem – let’s bathe in the sea instead!

Having said that, there’s so much to like. I could write a book about it. From the sharing nature of the Cypriots (if you’re passing, you’ll be invited to share their food) to the trusting nature of the car mechanic who fixed my car and waved me on saying “pay me when you’re ready”.

A visit into my tiny, local village sees me return laden with extra “freebies” from the baker and a gifts of hair tonic and sun protector from Christoferos, the friendly pharmacist. High levels of stress eventually respond to the slower pace of life and almost imperceptibly, ebb away.

And the views from my village and home are nothing short of spectacular. Let me share them with you.

Take a seat, grab some breakfast and let me share the delights tucked away in the vista before you. For a better view, let’s go up to the balcony.

A tour of Cyprus, Greece 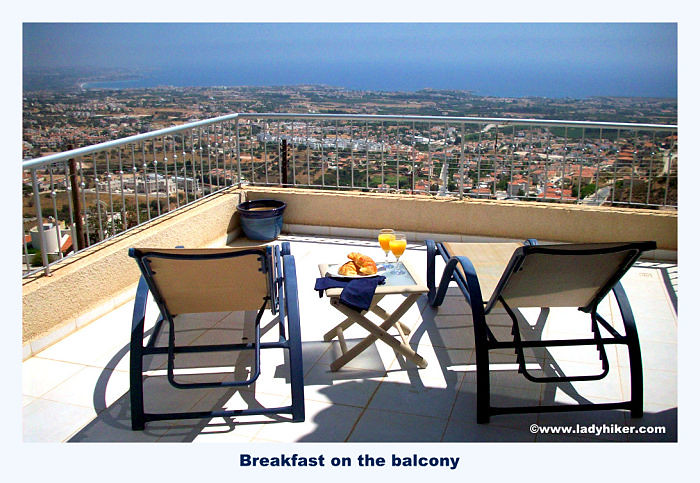 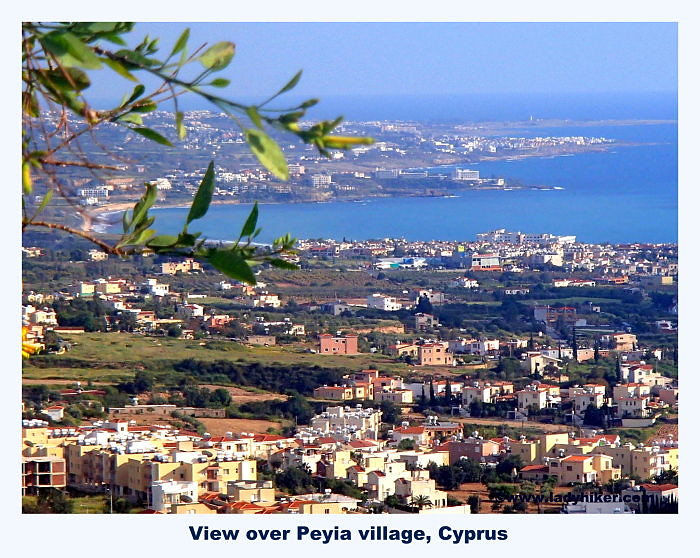 Cast your eyes to the far right. Just tucked away around the South Western tip of the Island is the Akamas peninsula. Delightfully undeveloped (largely due to the British commando’s unsociable habit of using it as a firing range) it’s a fabulous spot for a bit of hiking.

A crystal clear pool and bubbling spring here mark where Aphrodite the Greek goddess of love used to bathe.

In true Hollywood style the Greek god Adonis stumbled upon the bathing goddess whilst out hunting. He was instantly bewitched.

A beautiful story spoilt only by the insistence of the locals that Aphrodite was in fact a huge tease and loved nothing more than to pit the gods against each other in a battle for her favours.

A perhaps kinder appraisal states that “Aphrodite was known more for lustful love than romantic love.”

Moving eastwards along the coastline our eyes alight upon Lara Bay. This is a protected area for loggerhead turtles which return every summer to lay their eggs.

Fortunately, access is via a cratered, rough track which deters a huge flood of vehicles. However, the turtles are having a hard time of it. They are increasingly confused by the glaring lights in nearby Paphos town and often struggle to stay on course for their nesting bay. I could cry.

Next up is the tiny harbour of Agios Georgios

It’s the sheer serenity that strikes you here. A clutch of fishing boats, a taverna to immediately get to work as the catch is hauled in, and a typical Cypriot church. 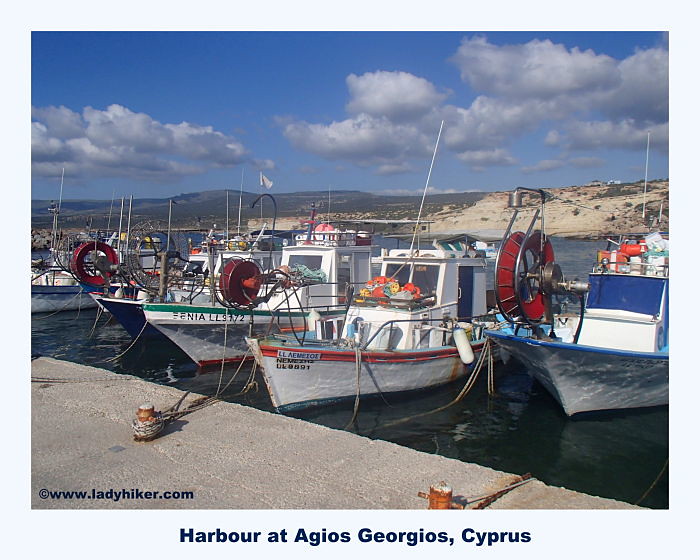 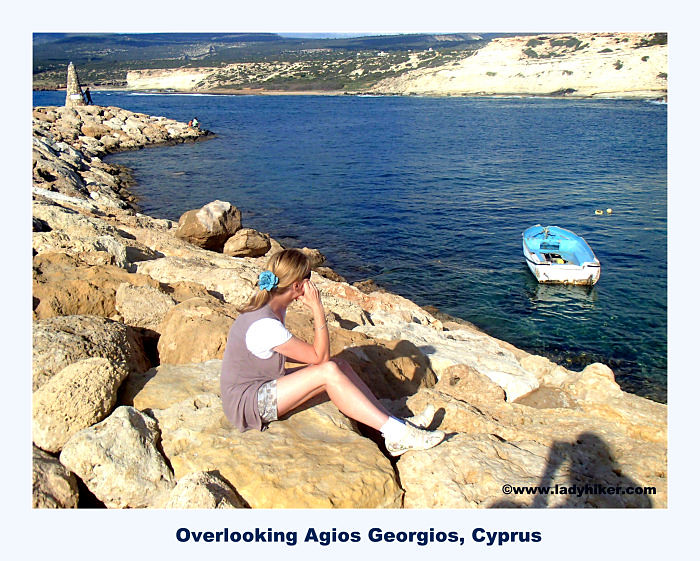 My children were always highly amused by the antics of the lone ice cream man parked here who only switches the engine on in his van as potential customers appear. This of course ensures that his produce is more runny cream than ice cream. No one minds. This is Cyprus. 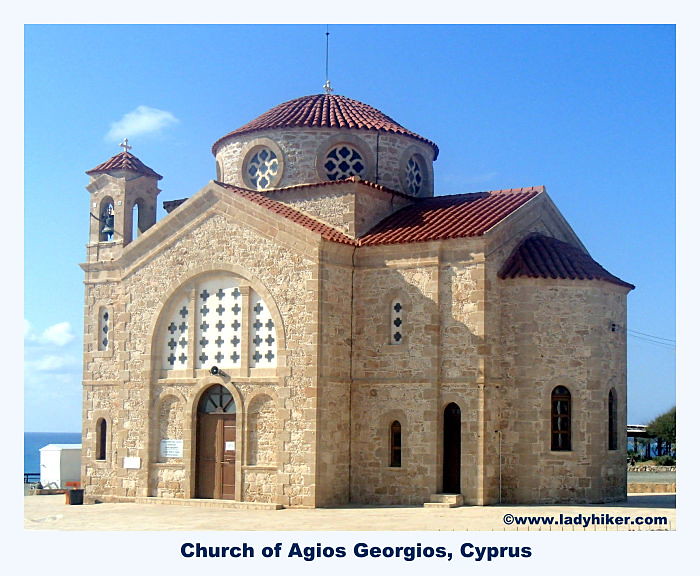 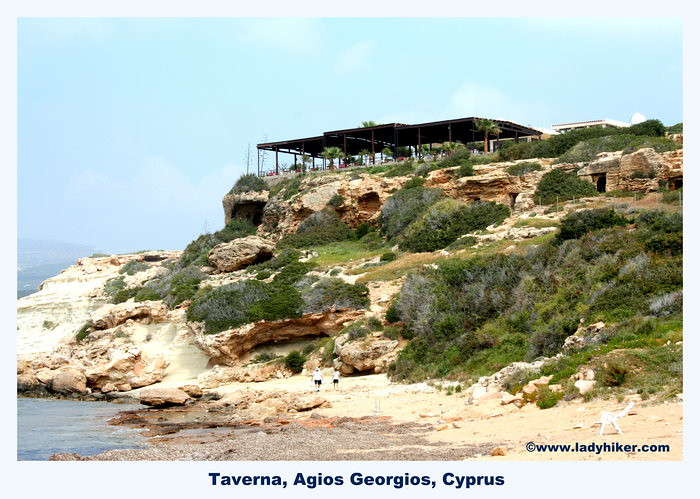 Sweeping our eyes along we reach the rocky shoreline of the Paphos Sea Caves and the unlikely recent tourist attraction of the wreck of the Edro III.

This ship ran aground in stormy weather on 8th December 2011 en route from Limassol to Rhodes. The crew were rescued, leaving the Captain and chief engineer on board to prevent the Cypriot’s from claiming salvage. 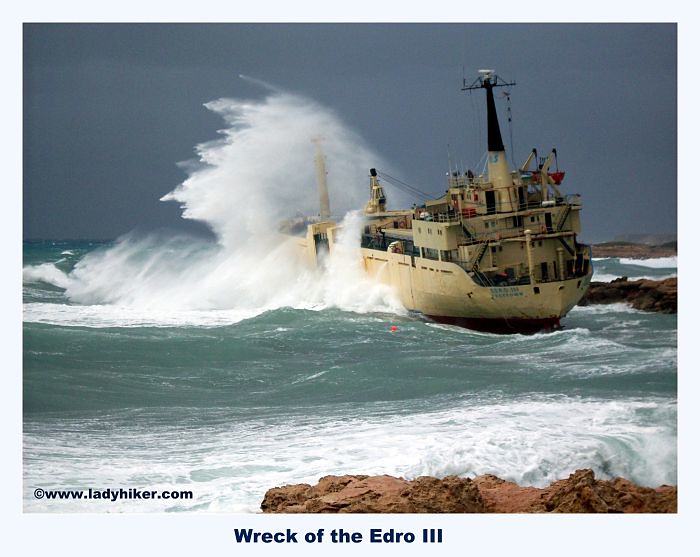 Although the ship looks incredibly close to the shore, it was still far enough away to prevent me lobbing over a few mince pies to the stranded crew on Christmas Day.

It’s not clear how the ship will be removed from the rocks but there is talk that it could be repaired and re-floated.

This is not far from Paphos’ other shipwreck, the MV Demetrios II which even has its own facebook page!

Tombs of The Kings

The Tombs of the Kings are an early burial site carved out of solid rock and dating from 300 BC. Bodies were buried with goodies such as jewelry and cosmetic boxes. However these have long gone due to persistent looting over the years. 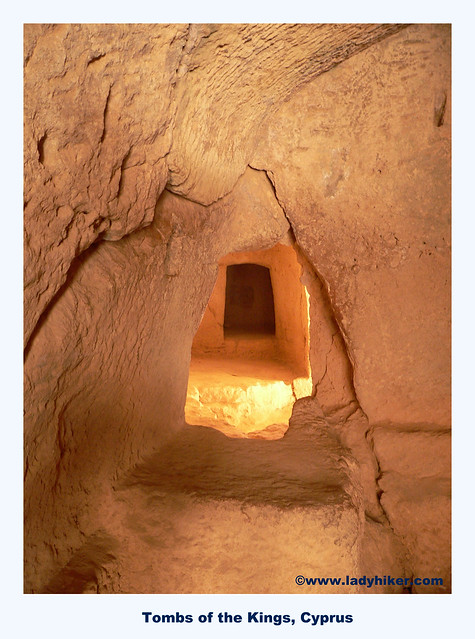 Do not be misled by the name – no kings are buried here. Simply the VIPs of Paphos. 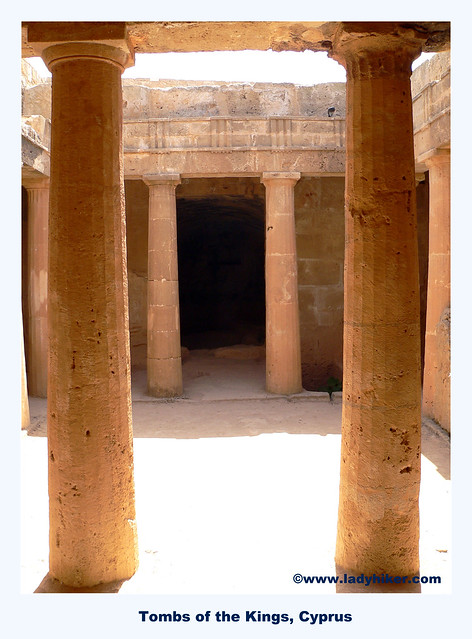 As happens very often in the islands of the Mediterranean, a farmer made an accidental discovery while he was ploughing his field. He unearthed the Paphos Mosaics which would have originally been the floors of Roman noblesmen’s villas. 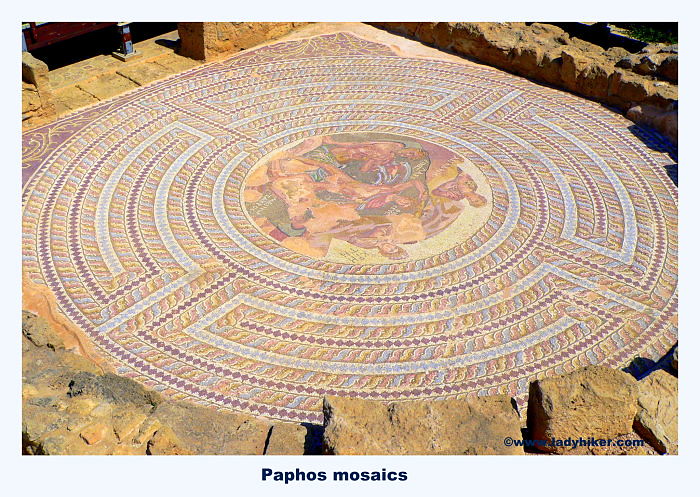 Here you will find superb mosaics including one showing the God of wine, Dionysus giving Ikarios the King of Athens the secret of viticulture. Nothing much changes!

Just tucked around the headland at the eastern extreme of our view is Aphrodite’s rock, one of the most photographed rocks in the world. 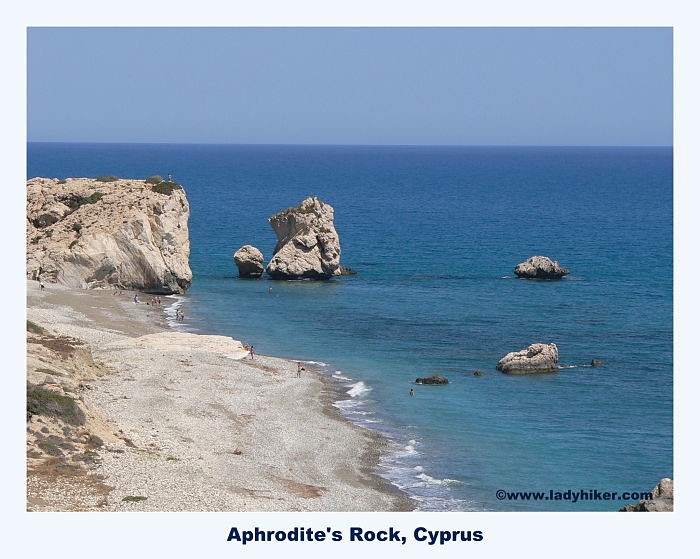 A whole host of rumours surround this mythical birthplace of Aphrodite, mainly involving the bonuses to be gained from swimming around the rock.

These range from increased fertility to lashings of good luck and the one that particularly appeals to me – that if you swim around this rock at midnight during the full moon, Aphrodite will make you ten years younger. Readers, I shall attempt and report back.

Now, who fancies a sundowner? 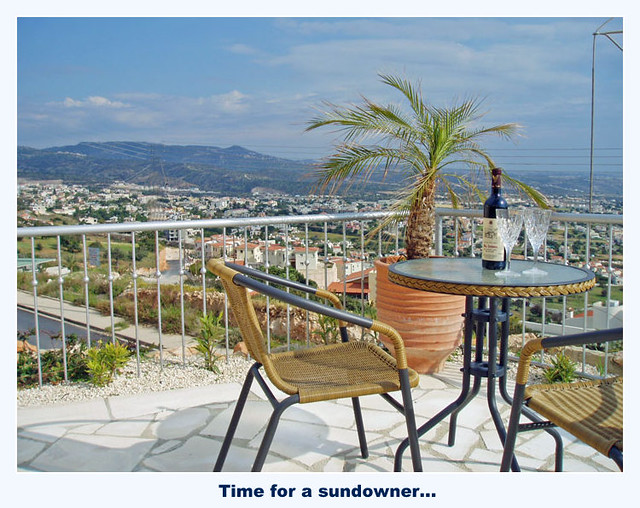 Bio: Karen Guttridge is Ladyhiker. Fueled by wanderlust and the odd cake, she likes nothing better than donning boots and rucksack, noseying around the UK and Europe and getting up to endless mischief. Read about her exploits at Lady Hiker or join in the fun on Twitter  and Facebook.

Check out these helpful travel guides:

Have you enjoyed your tour of Cyprus?