You’re surrounded by scrap metal, rotting cars, and mounds of orange dirt with doors tucked into the side and cars parked out the front.

You’d think it were deserted if not for the odd car throwing up dust as it puts into town.

You stand waiting. For the zombies and aliens to come walking down behind it.

I don’t want to say this in an insulting way, I think Coober Pedy is cool.

It’s one of the quirkiest and unique places you can visit in Australia.

The air is not cool. In fact, it’s stinking bloody hot. So hot that people are forced to live underground! See that’s what makes it so cool. Ha! Have I lost you yet?

There’s not a great deal to do there, but it’s fun because it’s so darn fascinating.

If we stuck to our original itinerary through South Australia, we were going to miss Coober Pedy as it was too far away. But, because of our change of direction, it meant we had to drive through it to get to Uluru.

Where is Coober Pedy?

Coober Pedy is located roughly halfway between Adelaide and Darwin in South Australia (with not much life in between!) It’s 846 kilometres north of Adelaide on the Stuart Highway. 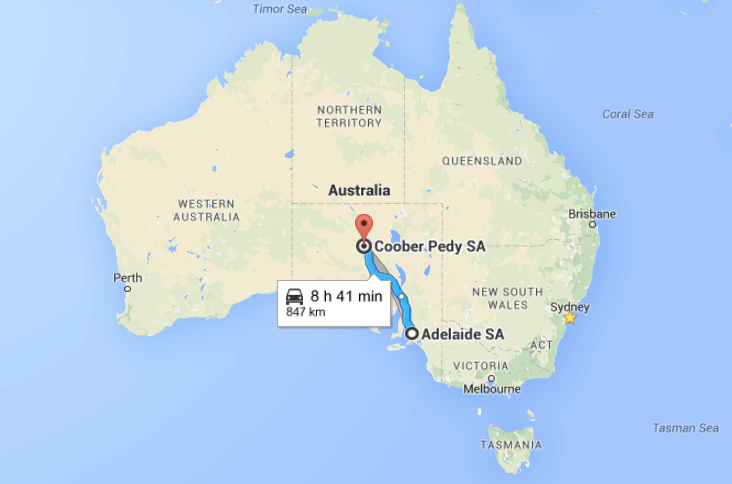 On the drive up from Streaky Bay we drove past gorgeous landscape of salt lakes and vibrant desert colours.

You may recognise the mysterious lunar landscape that surrounds this town that rises out from the desert floor. Mad Max one, two and three, Beyond Thunderdome, Down & Under and many other movies have been filmed here.

You know you’re almost at Coober Pedy when you start seeing mounds of dirt piled up as far as the eye can see – it’s the waste excavated by the opal mines.

It’s not just the homes that are underground, the shops, hotels, swimming pools, churches and even a campground are all under the earth as well.

Why on earth would anyone live here if it is so hot you have to live underground?

Coober Pedy is the biggest supplier of Opals in the world. Opal was first found in Coober Pedy on 1 February 1915 when a teenager, William Hutchison, stumbled on the “Surface Opal Nobbies” while gold prospecting with his father.

People have flocked to the region since. But, tourism is now just as important as the mining industry. We loved it for its complete quirkiness and desert beauty. 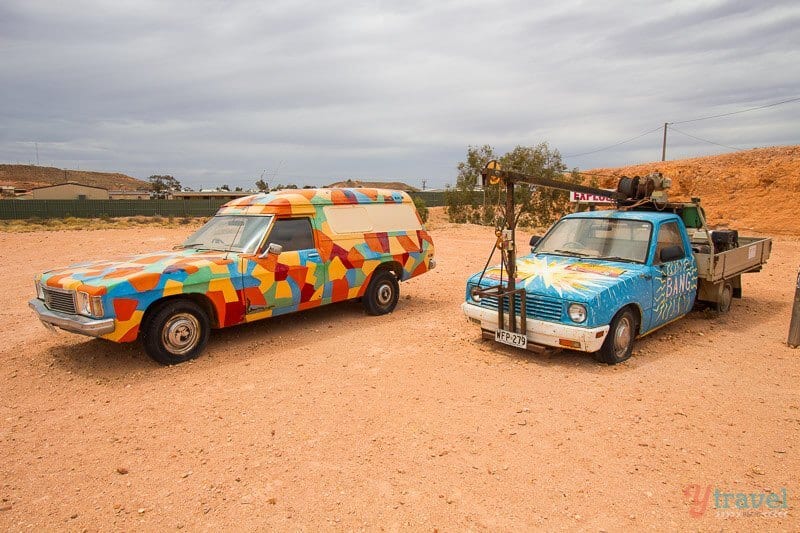 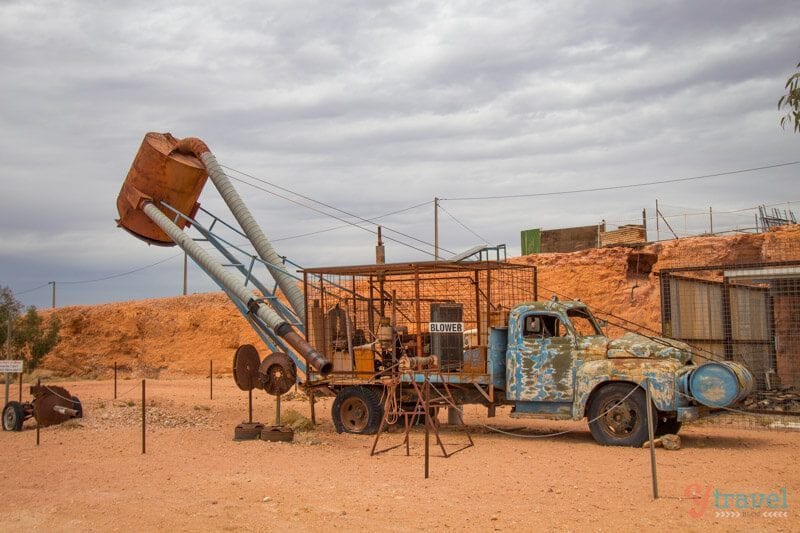 Things to do in Coober Pedy

The Old Timers Mine

The Old Timers Mine is the recommended place to learn more about the Coober Pedy opal history. At first I didn’t think it was going to be much of an experience but don’t let looks deceive you, because not much looks inviting from the outside. 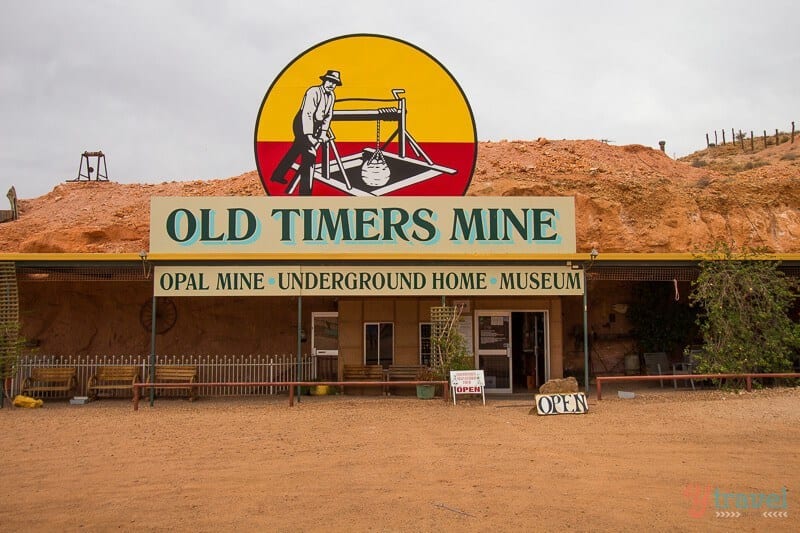 We loved exploring the museum and the mine shafts. 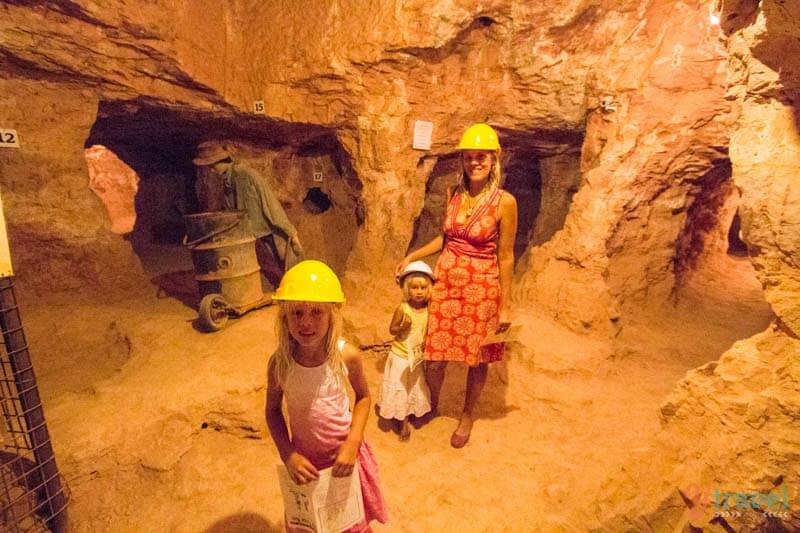 This mine is from 1916. The original miners had filled in the shafts and hidden it, presumably to come back later to get the rest of the opal but didn’t return.

When it was time to extend his underground home in 1968, Ron Gough accidentally discovered the hidden shafts AND opal waiting in the wall.

Instead of taking the opal and selling it (and making a LOT of money) they left it in the wall and opened up the museum to the public. It’s a self-guided tour that’s fun and informative.

We learned a lot about opal mining and the stories of the people who spent pain-staking hours under harsh conditions to strike it lucky!

The Coober Pedy opal museum shows how miners, usually working alone, would dig the shafts and blast holes and winch the dug soil up to the surface, all by hand, with only candles and carbine lamps for illumination. The tour also takes you through some of the original underground homes.

Out the front is a little noodling pit. What is noodling I hear you ask? It’s searching for opals amongst the rubble. 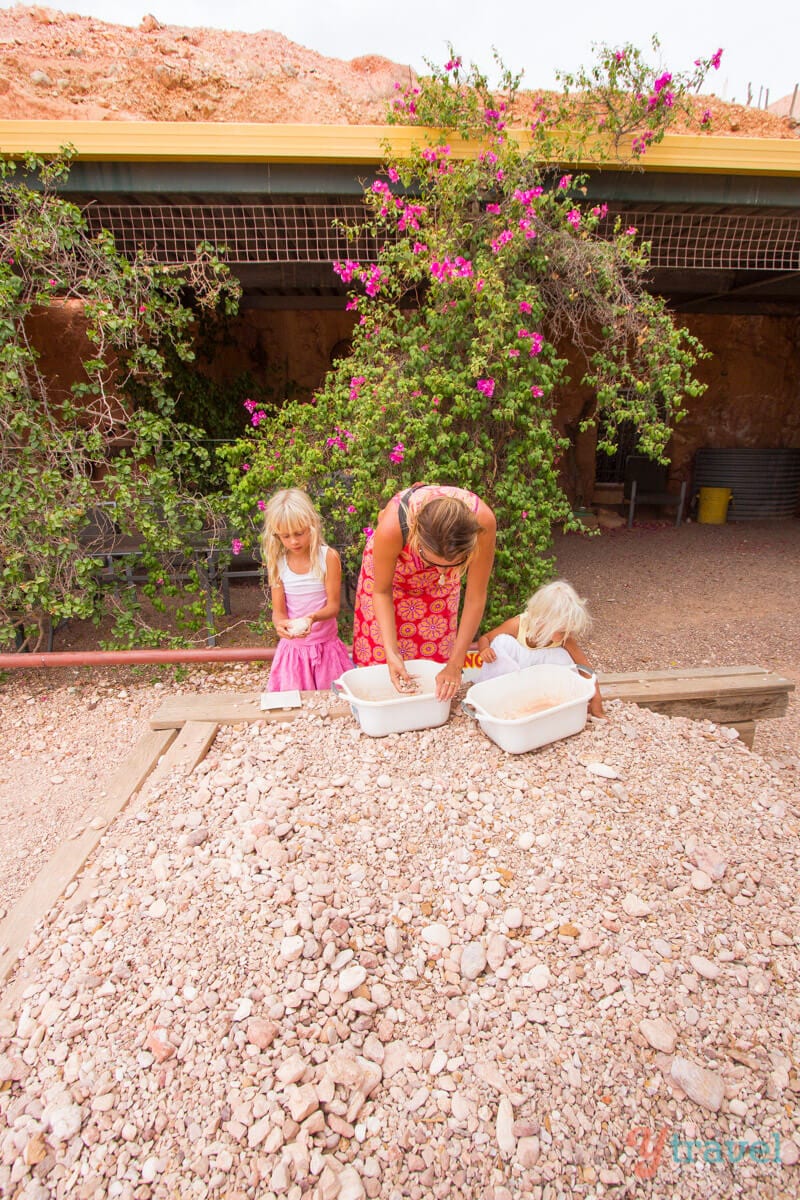 The Old Timers Mine is a perfect tour for kids.

This is the largest underground church in Coober Pedy, about 3km south of town.

You enter via a sloping walkway to the underground. Religious icons and statues have been carved out of the wall. Head up stairs to the balcony for views and a look at the stained glass window of the Sturt Desert Pea, the floral emblem of South Australia. 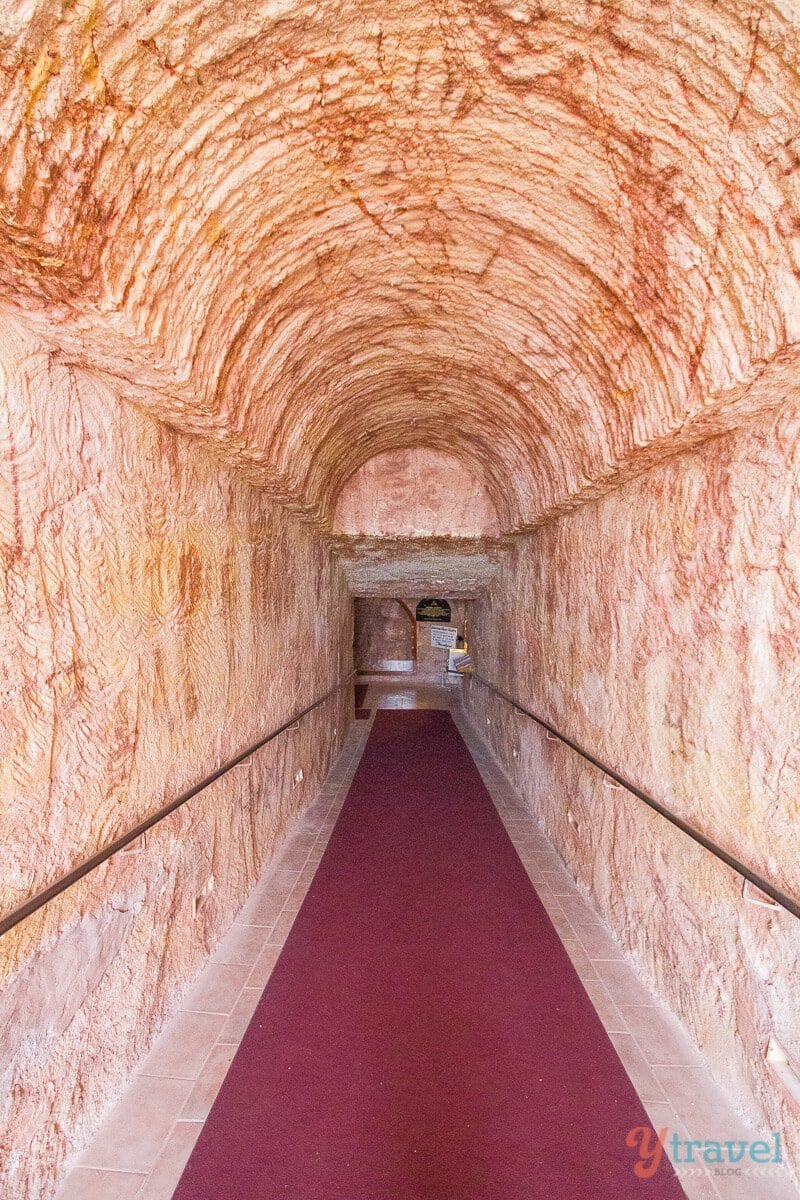 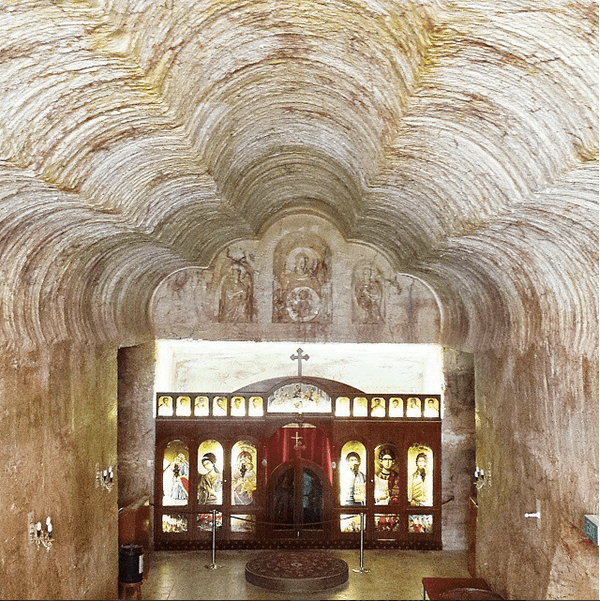 We found it a little underwhelming based upon rave reviews we’d heard of it. Cost is $5 donation per person. I don’t think it’s worth this as there’s not a lot to see, nor information on it.

But, it might be your thing so the choice is yours! 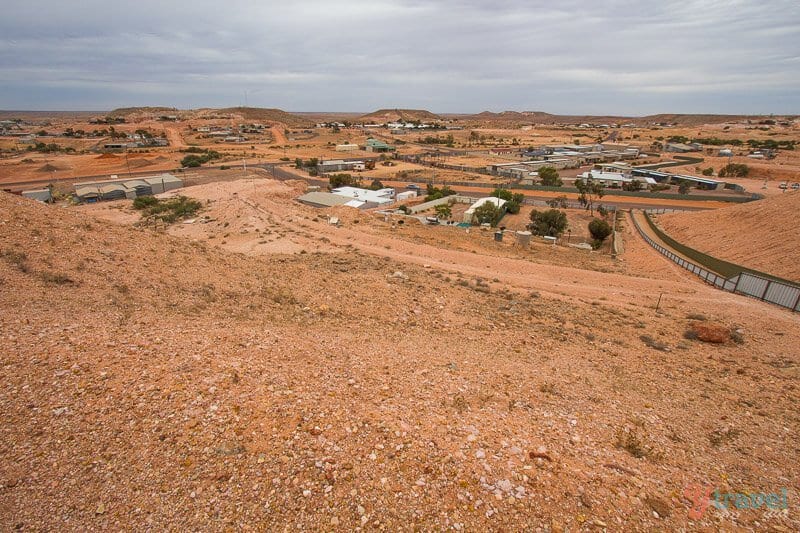 You can’t miss the Big Winch. Walk up if you can embrace the heat. Otherwise drive up and check out the sweeping views over the apocalyptic landscape. This is the place to watch the sunset. We had an overcast day so it didn’t put on a show for us. 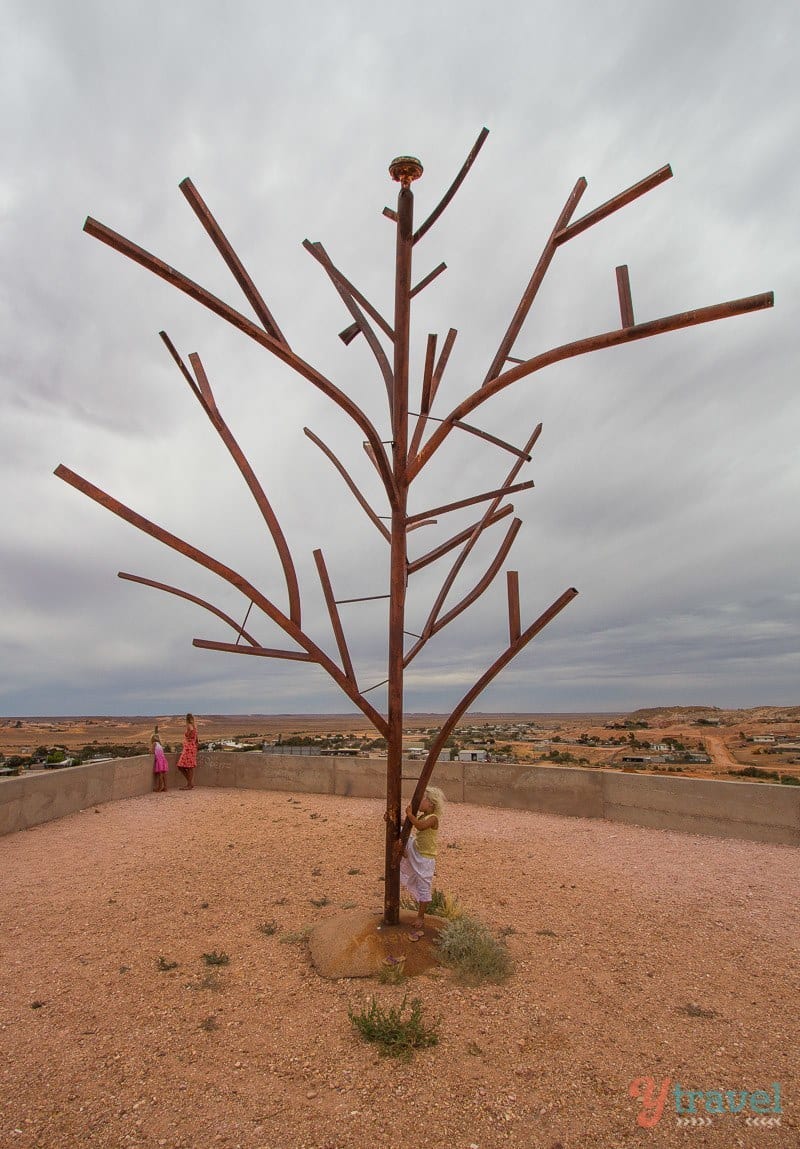 I’m still not sure of what the point to the Big Winch is – just another Coober Pedy quirky thing!

It consists of colourful low hills which have broken away from the Stuart Range, hence their name “The Breakaway”. There are two lookout points and the arid, barren landscape makes it hard to believe this was once part of the great inland sea 70 million years ago.

With its flat-topped mesas and striking sandstone colours, it sure is pretty! Sunset is when it’s meant to come alive the most.

It’s not often you’d find an outback town in Australia with a huge ethic diversity, but Coober Pedy has a population of 3,500 and over 45 different nationalities.

There’s a great community vibe here. What insight does that give you into what’s on offer in Coober Pedy?

That’s right – incredible food. We really didn’t experience much as our stay was short. Our community raved about Tom and Mary’s Greek Taverna, which was unfortunately closed for owner holidays as was the Italian Club, which was recommended to us for their schnitzels and elevated views.

The pizza at John’s Pizza Bar was exceptionally good and exceptionally large! You can dine in or take away. Whichever you choose, spend some time looking at the celebrity wall to see who has passed through the town and enjoyed John’s pizza.

There was no way we were spending the night in the camper trailer. It wasn’t the blazing heat that made that decision for us, but the fact that we were in Coober Pedy and the point of coming here is to go underground.

Coober Pedy is an Aboriginal word for White Mans Burrows. Half the town live in Dugouts, inexpensive underground homes that have all modern amenities and consistently maintains a temperature of 25 degrees year round.

We wanted the best place to experience this and after going back and forth between reviews, we settled on The Underground Motel.

It was cool, literally. The girls thought it was amazing to be sleeping underground, especially their little nook of coloured sandstone walls there bed fit in. It became their Princess Bed and the stage of a brilliant princess fairy rescue play.

We grabbed a take away pizza from John’s Pizza bar and ate it in our room. 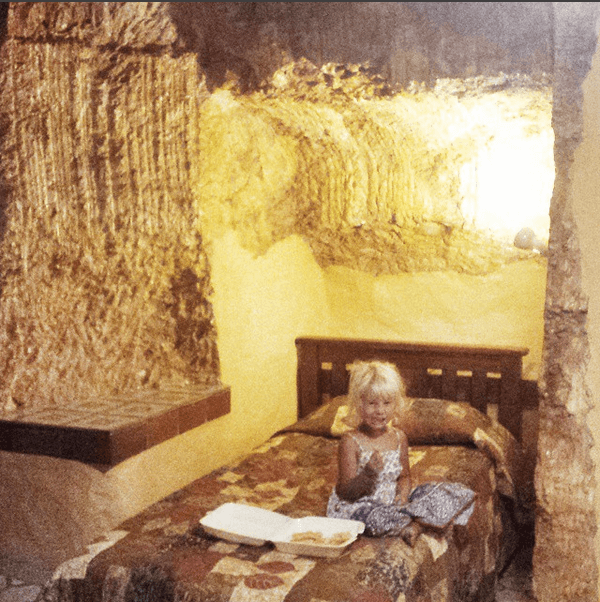 For other places to stay in Coober Pedy Booking.com has 12 properties to choose from.

For a different side of Australia, Coober Pedy needs to be visited.

Watch this video for Kalyra’s perspective on Coober Pedy:

If you’ve been to Coober Pedy, please leave your best tips and recommendations in the comments.

16 thoughts on “The quirky jewel of the Outback: Coober Pedy, South Australia”