Traveling is one of the best hobbies you can have. It allows you to see different parts of the world, meet new people, and learn about new things and yourself.

But for most avid travelers, it’s all too easy to forget this when you’re not on the road. Too often, we get caught up in the rat race, grinding a 9-5 and forgetting about the wonderful adventures that travel takes us on.

So this is for you, avid travelers, who are stuck behind a desk right now and feeling a sense of wanderlust. If you’ve still got a wait until your next vacation, don’t fret, you can still embark on a journey—a literary journey through the experiences of other travelers like you.

Sit back, and allow these incredible memoirs about traveling to be your muse. These books will remind you what it’s like to travel the world and satisfy your urges when you’re stuck at work. (This post is written by By Louisa Smith of Epic Book Society. See bio at the end of the post!)

The Best Memoirs About Traveling

So without further ado, here are the best travel memoirs, arguably, of all time. From the hilarious and outrageous to the insightful and thought-provoking, there’s a story or two here that would suit any traveler.

1. Neither Here Nor There by Bill Bryson

Of course, it wouldn’t be a list of the great travel memoirs without including the works by Bill Bryson. The hardest job of all is choosing which Bill Bryson novel to include!

After much deliberation, Neither Here Nor There takes the top spot. This comedic travel memoir was published in the early 2000s and is one of Bryson’s most highly acclaimed novels, winning.

Back in the 70s, Bryson embarked on an unforgettable backpacking trip across Europe with his quirky companion, Stephan Katz (Katz), who some readers may remember from his novel A Walk in the Woods.

Decades later, Bryson decides to relive that adventure and retrace his steps. The result is a comical disaster that makes for a lovingly witty story. For those who want an easy read with lots of belly-aching laughs, this is one novel that won’t disappoint.

2. Not Tonight Josephine: A Road trip Around Small Town America by George Mahood

If you’ve ever wondered what it would be like to drive around small towns in America with a beaten-up station wagon with a bullet hole in the back window, you’d need only read Not Tonight Josephine.

This hilarious travel memoir by George Mahood tells of a journey George took with his best friend Mark as they discover the “true America.”

Along the way, they make a few mistakes, overcome some challenges, stay in some suspicious motels and accidentally hike one of the most dangerous hikes in the US.

All along the way, George misses his girlfriend back in England. Can he convince her to come out and enjoy the journey with him?

Eat, Pray, Love is one of the most inspiring memoirs about traveling as it tells of how one woman turned her life around and found happiness after escaping a mundane lifestyle.

Elizabeth Gilbert seemingly had it all; a good job, a nice house, and an adoring man by her side. Only, she wasn’t happy.

Trading it all for a life of travel, she visited India, Italy, and Indonesia. Feeling guilty for leaving her life behind, she learned to move on and find happiness, spirituality, and love.

This is an enlightening travel book of self-discovery and self-reliance.

4. Travels with Charley by John Steinbeck

From the award-winning author of the highly acclaimed Of Mice and Men is the moving memoir by John Steinbeck.

Travels with Charley is a travel memoir about traveling with his dog as they road trip around America in a campervan called Rocinante. Steinbeck wanted to learn about his country on a deeper level.

As he travels from state to state, he witnesses so many intriguing things and discovers many different cultures in this enormous country.

He travels 10,000 miles in a big circle, from Long Island to Maine, across to California, back towards Texas, and finally back to New York. If you’re looking for a memoir that covers a lot of ground in the US, this is it.

Che Guevara is most commonly known for his role in the liberation of Cuba, but what many people didn’t know about him was that he was once a twenty-something medical student who wanted to see the world.

At 23, he set off from Argentina with his friend, Alberto Granado, on an epic road trip around South America. They wanted to see the sites they had only seen in books (for there was no internet back then).

As they traveled through Chile, they met miners that were exploited by their employers; they met the remnants of the Inca civilization, a once-powerful society bought down to near tatters. But what inspired Guevara the most was how an ostracized leper colony in the Amazon was treated.

In this eye-opening travel memoir, readers learn how travel is not just about the sites you see but the people you meet. This epic adventure was the spark that ignited Guevara’s political career and ideas of social equality.

6. Tracks: A Woman’s Solo Trek Across 1700 Miles of Australian Outback by Robyn Davidson

One of the most inspiring memoirs about traveling is Tracks by Robyn Davidson. This inspiring biography tells of how Davidson walked from Adelaide to Darwin, across the Australian outback with four camels and her dog.

Along the way, she must fend off prying men who deem her unfit for the journey alone. She meets aboriginals who help her find water.

It took her 9-months to complete the 1,700-mile journey. It’s a story of bravery, determination, and resilience. Her story piqued Time Magazine’s interest, and her journey was well-documented by the reporter, Rick Smolan.

Robyn Davidson’s memoir is an inspiration for any solo female traveler looking for the courage to step out on their own. Tracks was also made into a feature film starring Mia Wasikowska as Robyn Davidson.

The Great Railway Bazaar is a hilarious memoir about traveling by Paul Theroux, who journeyed from Eastern Europe to Southeast Asia on the Trans-Siberian Railway.

This book is written as a part memoir and part guidebook and is both comical and inspiring. As he travels, he writes about his observations and the hilarious encounters her makes.

Written in 1975, this memoir is on par with the works of Bill Bryson and Bruce Chatwin. If you’re looking for insightful and funny, this memoir will fill your heart with joy.

8. All Over The Place: Adventures in Travel, True Love, and Petty Theft by Geraldine DeRuiter

After getting laid off from her job, Geraldine DeRuiter had one thing in mind; travel. Only, she had never traveled before and wasn’t prepared for the adventure before her.

She couldn’t read maps, had no idea where Russia was and had a phobia of pigeons. Not the best traits to hold before starting your travel adventures.

But as she ventured on, her experiences taught her a great deal, and her inexperience gave her a hilarious story to tell. From getting lost to lost luggage, this is a memoir detailing how even the rookiest of travelers can survive with a little determination.

9. Footloose: Twisted Travels Across Asia, From Australia To Azerbaijan by Mark Walters

Footloose is an epic memoir about traveling across the world, from Sydney, Australia to Azerbaijan… all without flying. And in traditional Aussie fashion, only wearing flip flops and without shorts or a towel.

Traveling halfway across the world on only trains, boats, and buses, Walters shares the hilarious tales of his wonderful journey. He writes about his experience coming face-to-face with suspected terrorists, Chinese tanks, and an ex-Soviet officer with no clothes on.

This hilarious and sometimes a little frightening novel tells of the most extraordinary people and experiences people can get into when traveling.

10. Round Ireland with a Fridge by Tony Hawks

This book is exactly what you expect it to be from the title. It’s the story of an Irish man, Tony Hawks, who travels around Ireland with a fridge.

After losing a drunken bet, Hawks was dared to hitchhike around the country with his gigantic appliance as his companion.

As you can imagine, anyone lugging a huge domestic appliance around with them will cause a bit of a stir.

Along the way, Hawks and his fridge meet a real prince, a fake king, and have the fridge christened by a priest.

It’s no surprise this travel memoir became an international bestseller. The writing style is comical but also a little poetic – sometimes you forget he is referring to a fridge and not his best friend.

Final Word on The Best Memoirs About Traveling

Whether you’re slugging away behind a desk and need an awesome book to get lost in on your lunch breaks, or you’re about to take a flight and need some inspiration for the journey, these travel memoirs are an excellent read.

Comment: Have you read any of these travel books? Do you have a favorite travel memoir to add to the list? Tell us why you love it! 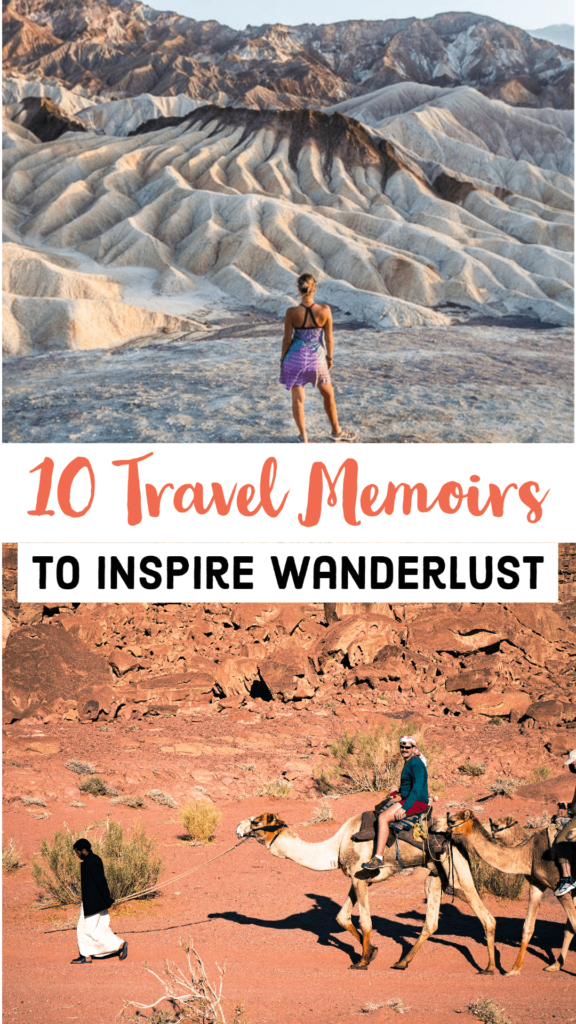 Louisa is the Founder of Epic Book Society, a book blog sharing recommendations for epic reads. Louisa is not only an avid reader but a nomad traveler and travel content writer. She has spent the last five years on the road… and counting. She has visited 53 countries (so far) and can often be found in far away, off-the-beaten-track locations, sitting in hammocks with mountain views with a book in hand. Louisa is living her best life and aspires to motivate others to do the same.