I held our first public webinar last week on solo female travel in India. Three weeks before that I knew little about running webinars. But, deep within me I had this longing to do them.

As usual, when you follow the calling of your heart, doors open and things arrive to help.

The opportunity to do this webinar came and I jumped right into. I did not know what the hell I was doing, but I knew I could learn.

If someone else could do it, I could too. All I had to do was learn a system. I don’t have a fear of failure that steps in to stop me.

I roped in my assistant Bryanna to help, throwing her into the deep end with me. I learned a lot in the lead up to the webinar, and I was so grateful for my total unawareness that just goes “yeah that sounds good. We can do that. Let’s go” without ever realizing how much work goes into things. If I knew all I had to learn, I would have procrastinated on it. 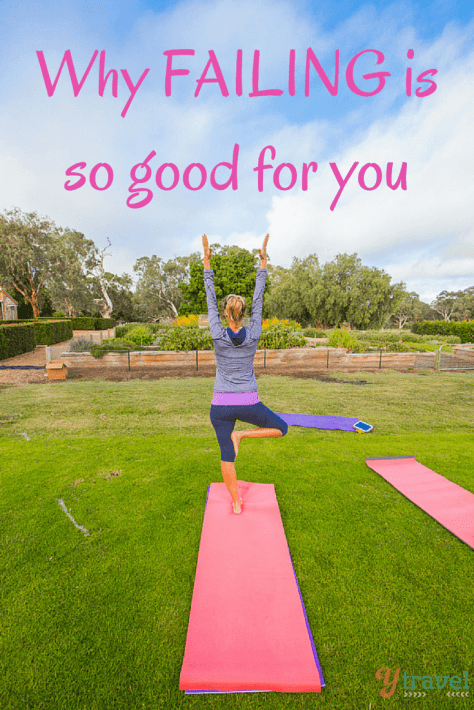 So we set it up. I was expecting things to go wrong but was confident I had most things under control.

We started with my intro slides I’d spent so much time creating. I was excited to share them. Except, I forgot to pin them to the camera. So for 10 minutes I’m referring to slides no one could see. It must have been so boring!

I’d left the camera on Mariellen’s face, which was so serene and bright, thank Goodness. (I did prep the girls beforehand not to pick their nose in case they were on camera the whole time. I think Mariellen is grateful for that tip!)

I had no clue this had happened and carried on with the webinar. We high-fived and cheered after it because we were so pleased with how it went. Then I watched the replay and face palmed myself! How could I be so stupid?

I forgot everything I learned and failed big time. I was so annoyed with myself and was not shy in saying so. I was meant to be professional!

Eventually, my doldrums reached the crossroad.

Okay. So I either stay here wallowing about in my patheticness and do nothing ever again or I just get some perspective on the failure and do something different. The choice is yours.

Is this really such a big deal? Can we survive this? Do you think most people could overlook this failure? Did you give them enough value to help them do that? Do you think they even noticed? Should you maybe just stop worrying about what people think of you?

Because it wasn’t a great big fail, it was just a mishap and the thing bugging me was that I felt embarrassed. Embarrassed that I messed up, and it wasn’t perfect.

Big deal. Does anyone expect it to be? Perhaps I should just give up trying and welcome in the failure as a lesson and something to laugh at.

Let people know you’re okay with failing and they’ll let you off the hook.

Viewing it in this way helped me to see that most people probably didn’t notice. Well really they would have as there would have been a weird kind of disconnect, but they didn’t say anything except that they feel more empowered to travel to India.

How could I fix this?

I sent an email to participants telling them of my facepalm moment and gave them the slides.

I  also cut out the intro and uploaded it into YouTube with that part missing, so the replay is not so silly. No big deal. The important stuff that will empower women to travel to India is still there.

And then I did what you should always do when you fail. Laugh. Share the failures with someone and laugh about it.

I shared it with Reena and Mariellen and laughed about it with Bryanna when we put together our webinar strategy moving forward. “Can you believe what I didn’t do?”

What did you learn?

From now on do a sound and visual check with participants. Be aware of where the camera is.

Despite this failure, I feel more confident about webinars and know next time I’ll do a better job. All the reason to do another one.

I’ve grown simply because I failed.

Where did I fail most at? The tech side of things. What was I most afraid of going into the webinars – having tech fail. Why? Because it’s what I feel so inept at! My greatest fear came true, and the world didn’t fall apart.

Cool, I just realised how truly significant my biggest fear was, and it didn’t stop me.

Isn’t that the reason we never try things? We’re afraid of not being good enough, or not having control. Stack the odds in your favour – create a backup plan, call on help, learn from experts, and then just do it.

When things fall apart, get over it and move forward.

The only way to get rid of the fear is to walk with it. When you hold its hand, it soon becomes your friend and you don’t see the enemy within anymore.

Atychiphobia is a fear of failing and stops many people from achieving their dreams. People would rather not try to ensure they won’t fail, rather than risking failure to gain rich rewards.

Atychiphobia is otherwise known as how the hell did you ever learn to walk?

It is unfortunate that you fell multiple times before you could walk, but if you never pushed through that fear you’d still be crawling. Babies push through the fear as they don’t feel it for the simple reason that they have no ability to discern yet between fortunate and unfortunate.

They just do what needs to be done. And keep trying until it gets done.

The simple solution to your fear of failure

There’s a simple solution to your fear of failure – choose to see every outcome as fortunate, whether it turns out the way you want it to or not.

Lose the desire for control, let go and surrender.

One of the biggest takeaways I learned from our guest experts on our solo female travel to India webinar last week was the idea of surrender. Their advice for having an experience of India that leant more into the LOVE side rather than hate was just to surrender.

Allow India to shape you. Let go and be guided. See everything as a messenger or a lesson, guiding you to growth and incredible experiences. Every exchange and experience becomes worthwhile for the gift it bears – good or bad. It’s just a perspective.

Allow life to shape you.

I LOVE failure. I intend to fail, and I fail often.

It can be a curse because I dive into things without being properly prepared. I’m okay with that because I know that I’ll fall, and it’s in this moment of hitting the pavement that I fully envelop the lesson.

It might take me years to get where I want to go if I refuse to fly. Whereas if I just bloody well jump being okay with failure, then I can bounce back quick, re-evaluate, change what needs to be changed, and keep surging forward.

Failing teaches you who you really are, what you’re capable of, where to find your strength, how you can lean on others, and what you like and don’t like. It gives you directions, new perspectives and horizons.

Take one thing you want to do but are afraid to try because you don’t want to fail. Decide to do it knowing that you might just fail. Make the decision that for this moment today, you will accept the failure and not let it get you down.

Now do it and see what happens.

What a relief that you didn’t die and barely no-one noticed your failure. Feeling a little more confident to try again right? In fact, you kinda like this now!

Now observe what happens next. What did you learn? Do you now understand where you went wrong? Can you adjust your approach tomorrow and try it again? Perhaps you might fail again, but embrace Edison’s spirit – 10,000 failures before he got to light.

Aren’t you freaking glad he failed over and over again? Imagine if you stop trying because you’re afraid of failing. Imagine the light you are not plugging into shine to the world. Edison’s no different to you, he was just okay with failing.

Failing brings you to the light.

As Edison said, “I failed myself to success.” And I know my one webinar failed in a slight way, but in the future I’ll succeed at them because I’ve failed.

One of my favourite inspirational videos comes from Michael Jordan. It’s actually a NIKE commercial, but hey they’re great at them.

He didn’t even make the high school basketball team. Imagine if he let failing stop him? No one would have a good pair of shoes to fly in.

Just in case you didn’t stop to watch the video he says,

I look back on my life today and think “What failures?” There sure are plenty of them, but I don’t feel like they’re there. It’s because each one has given me a different set of eyes and lifted me up to here. Our financial failures – they were super hard to take, but I don’t regret them.

Admittedly I risked without the odds in my favour, but it helped me learn about gut instinct and denying your true self. So if I never had failed so hugely, I’d probably be still plodding along just living rather than being and serving.

When I look back at my travel life to find the failures I see them so clearly – running out of money, not practicing safe travel (getting kidnapped on a motorbike by mushroom tripping locals – true story, lived to tell the tale!), leaving my travels early, getting sick – all those travel fears you have, I’ve experienced on some level. It’s no big deal.

Each failure was so good for me as it taught me more about myself than I ever would have learned waiting around to get it right.

You might be thinking about travelling. You might be really scared. You might not know how to make it work. You might be so fearful you will fail. You might be tearing apart the ropes that hold you secure – leaving a job, selling a house, taking the kids out of school – all of which is frightening.

The threat of failure looms  incredibly large and it’s stopping you from going for what you want.

Either way you can’t lose.

And that’s what failure is – it’s always a win, depending on how you look at it.

What have you learned through failing?

9 thoughts on “Why failing is so good for you”