Whether you’re an international who’s just rocked up on the Gold Coast shores, an Australian who’s keen for fun in the sun, or a wannabe grom who adores Steph Gilmore or Mick Fanning, your objective when you visit the Gold Coast in Queensland is clear – learn to surf on some world class waves.

There is a lot the Gold Coast is known for theme parks, jet boats, nightlife, a vibrant ambiance, a balmy sub-tropical climate, and amazing beaches, BUT there’s also something a little more thrilling.

If you don’t know (I ask you why the hell not?), the waves on this section of the East Coast of Australia make their stance as some of the nation’s, if not the world’s, best.

Why is the Gold Coast one of the best places to learn to surf in Australia?

Don’t take it from me, turn to the masters.

Home of Mick Fanning, Steph Gilmore, Joel Parkinson, and Sally Fitzgibbons – some of the world’s best, and most loved, surfers. Hell Mick can even knock out a Great White with one punch. (even Kelly Slater has a beach home here)

Ye, Coolie on the Gold Coast, may be small in population, but its surfing prowess is large. It’s possibly the most successful surf region on earth.

Want a world surfing champ as your surf coach?

For the older crew, you might have heard of the former world champ, Cheyne Horan. So cool he spells it with a C. I can vouch that he is cool, even now he’s in his fifties.

My eight-year-old daughter will even agree. She had no idea what any of it meant until after her first week of surfing lessons when she met Cheyne, and I told her, “Do you know that a few years ago (okay so maybe way back in the early 80’s ) he was the best surfer in the world?”

She looked at me with eyes that said they were the Coolest Words I’ve Ever Spoken.

The benefits of surf lessons for kids 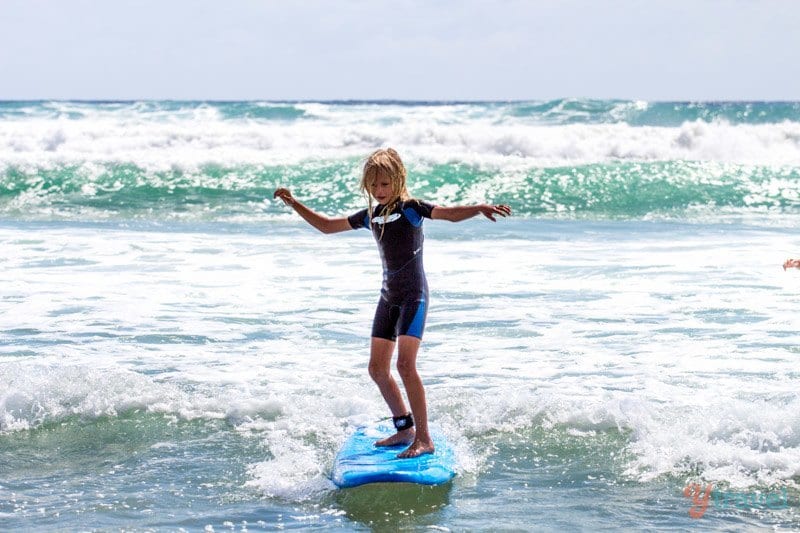 Learning to surf has been the best gift we’ve given our daughter. She might not know it, but as her wise mother, I do.

I noticed a dramatic shift in her when we decided to take on surf lessons in the spring school holidays.

She talked to the ocean. She communicated with her body. She learned how to meld the two into fun.

The girl just got it.

She stood up on her very first attempt and has been nailing it since. There is no fear or inhibitions getting in her way. She’s too young to fear failure, or looking silly, to her she’s just learning a new skill and having fun. Her body has permission to move with effortless grace, and pop on the board she goes.

Last weekend, on the walk to her early morning surfing lesson, she did a quick surf check and said, “Whoa. Look at that. That’s insane.”

A lady walking her dog overheard and laughed, “I thought the same thing.”

I replied. “We’re about to go out in it.” (and mumbled, I’m scared.) They were cyclone waves rolling in from the shores of Fiji.

Kayla said a few surf words about double barrels and things I didn’t quite understand – with a spring in her step to get out there.

This was not my girl a few months ago. She would have run straight to the safety of the monkey bars instead.

I flashbacked to when she was two years old aware of what taking off on a plane meant. She was thrilled, yet still slightly apprehensive. Meanwhile, I was terrified, pretending to be in control to help her be brave. The reality was, I asked if she wanted me to hold her hand purely to prevent me from hyperventilating. (Truly, bourbon is something I often ask for straight after take off when it’s safe to walk around! World’s biggest travel blogger afraid of flying. I kid you not. Perhaps BBC travel will like that story angle!)

Now I was in the same place on land. Terrified by these cyclone waves enticing surfers from everywhere in droves – yet “bravely” agreeing to body surf with her and asking her to hold my hand.

“I’m not very good at body surfing. But, I’ll come in with you and have a swim.” Bugger. Now I have to show up and do this.

Scott, her regular coach with Cheyne Horan Surf School, took us in and instructed us on how to body surf. I listened very carefully, and in true sportsmanship, let Kalyra take the first wave beside Scott.

Wowser. That was fun. That was the first time I’ve ever done that. It took my little girl to show me how.

Thank goodness, Kalyra does not have that fear – thanks to Cheyne Horan Surf School.

Learn to surf with the Cheyne Horan Surf School

If you want to learn how to surf on the Gold Coast, this is the school. We’re not affiliated in any way or sponsored by Cheyne Horan.

We suspended all shark fears to give Kalyra the lessons for her birthday present. After her ten lessons over the school holidays, she asked to do to every Saturday. I do not find it a coincidence that she suddenly decided she wanted to travel again rather than stay in school.

I know that ocean spoke to her about freedom, opportunity, and a life pursued by passion.

I love our Saturday morning surf lessons, and I’m ready to go with her every day this summer. We were going to buy her a board for Christmas, but now we’re going to the US, it will be more cost effective to do the surf lessons and it will ensure she has the right surfing coaches.

Cheyne Horan is your typical surfer – keen for a chat, passionate about waves and the ocean with a total Zen approach to creating a life full of rich stories. (I love hearing them!)

What better role model for your child learning to surf than a former world champ who’s now created a business around his surfing love?

He and his coaches surf every day and have taken on big breaks around the world. They know what they are doing in the water. Tony and Scott have been patient, enthusiastic, supportive and encouraging coaches.

They never push, always working to the level of each child and pushing the kids up to the new level gently and when they’re ready. One day I watched Tony spend almost the entire two-hour session with a child who was scared to play in the waves.

He had him at the tide’s edge, playing and standing up on the board and getting used to the water until he felt confident to go, without tears, into the waves and ride it in lying down on his board. The transformation was incredible, and I was so impressed with Tony’s gentle, compassionate approach to that child. He pulled little Savannah onto a board at the same time to play. She still talks about how much fun she had standing up on that board and surfing.

When I ask her if she wants to try surfing lessons soon, she says “Muuum. I already know how to surf. Remember when I stood up on the board like this and Tony wobbled it and I did not fall off.” 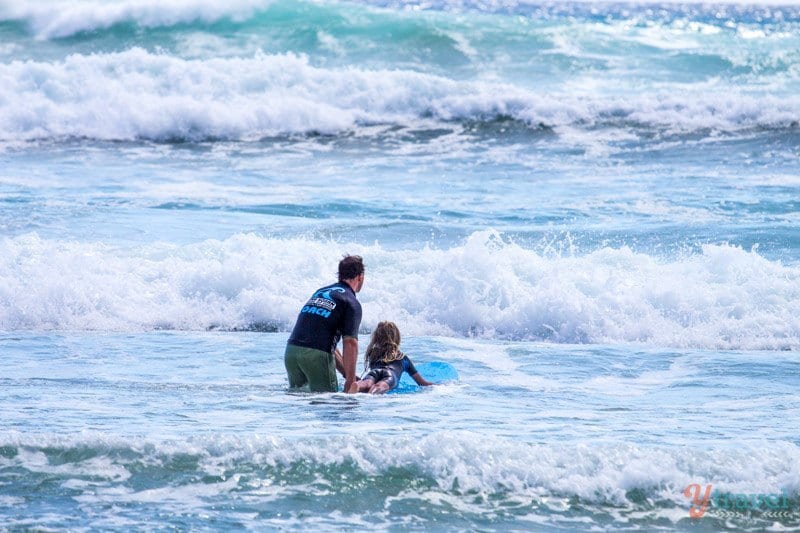 The Cheyne Horan Surf School is diligent with safety. They go over the routines again and again, to ensure it becomes natural for the kids. Kalyra will often say, “Mum I know this. I just want to stand up.” I tell her the importance of practicing safe habits in an untamable ocean.

I was worried in the surf this past weekend because of the power of those cyclonic waves, but I felt so reassured and calm knowing Scott was in the water with us. He totally knew what he was doing and had such control. As a result, Kalyra felt safe and embraced the power of those waves for some pretty awesome rides.

What better way to spend with your children than surfing at beautiful Burleigh Heads?

The Cheyne Horan learn to surf school and the Surf Grom program. 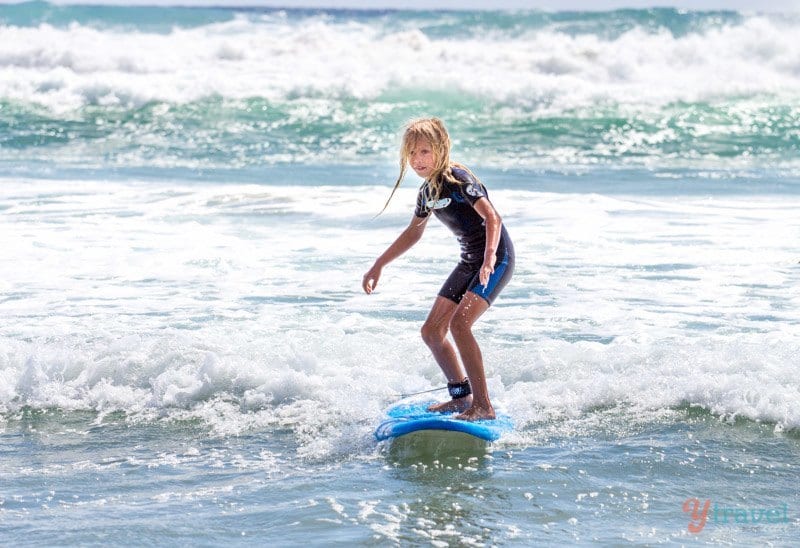 Cheyne Horan offers surf lessons to kids and adults ranging from beginner to more advanced levels. We surf at Burleigh, but he also offers lessons at Surfers Paradise and Coolangatta.

Lessons start from $35 per person.

We participate in the Surf Groms program, which is an 8-week surf school program for 5-12-year-olds.

Perhaps, one day in the future, Kalyra will be adding her name to that incredibly long list of Surfing World Champs that come from the Gold Coast ocean.

Are you a surfer? Have your children learned how to surf?