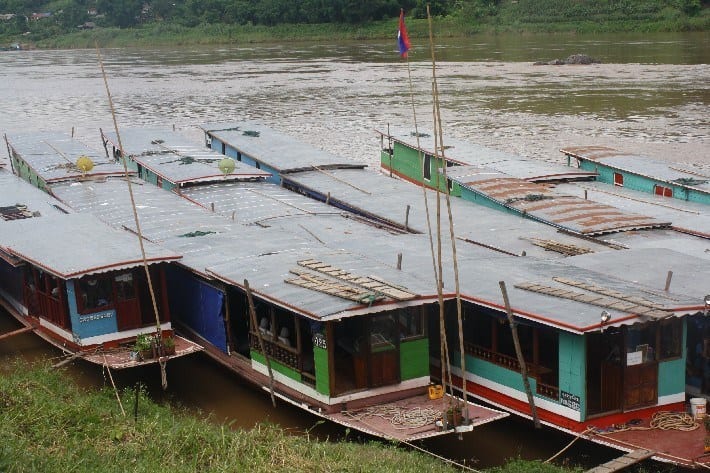 There was a line-up of ten boats docked in the Mekong River, knocking into one another like bumper boats.

From the hill above, the silver-roofed crafts looked like rusty trailers sitting atop faded turquoise ferries with red hulls.

On board, the ceilings were so low that anyone above six feet had to duck, or else receive a paddling from the low hanging beams. Lifted floorboards didn’t care what height you were. The fifty seats looked as if they had been torn out from a bus. They were now taped to unbolted two by fours that slid about the floor as the boat rocked.

“Our seats are not together,” my wife said, noticing that a piece of paper that read 26 was on one side of the boat, while the slip with number 27 was across the aisle.

I rearranged the paper numbers so that we could sit together.

Nobody else seemed to follow the rules and once the seats filled up, travelers took to the floor of the slow boat for the two-day, three-hundred-kilometer journey down the muddy Mekong.

We were entrenched by forest rising from each bank. Those with cameras around their neck leapt between port and starboard, shooting up the green mountains as if the idyllic, virgin jungle would disappear. (It would not disappear even upon reaching our final destination: the city of Luang Prabang.)

Other passengers vied for the small triangle of space at the bow to sun bathe. There were readers and sleepers and wayfarers exchanging travel tales.

Toward the back was the party crowd, getting acquainted over drinking games. They shouted about boozing in Chiang Mai or of pingpong shows in Bangkok.

They drank their pre-purchased liquor and toasted with Beerlaos. As the boat made its way down river, the woman selling booze kept upping her prices. After a few hours, beer had inflated from $1.25 to $2.00.

We passed fishermen reeling in lines and hoisting up nets from austere sampans. There was the occasional bamboo village of, at most, a dozen cottages. Now and again, I spotted women washing the family’s clothes, while naked children bathed nearby. Toddlers raced along the banks where cows also roamed. Branches and bottles circulated around us in mini whirlpools.

Along the shore, giant barges with two-story turquoise superstructures rising from the aft rested beside hibernating slow boats. Bamboo poles with dangling strings were fastened to rocks, serving as makeshift docking stations. 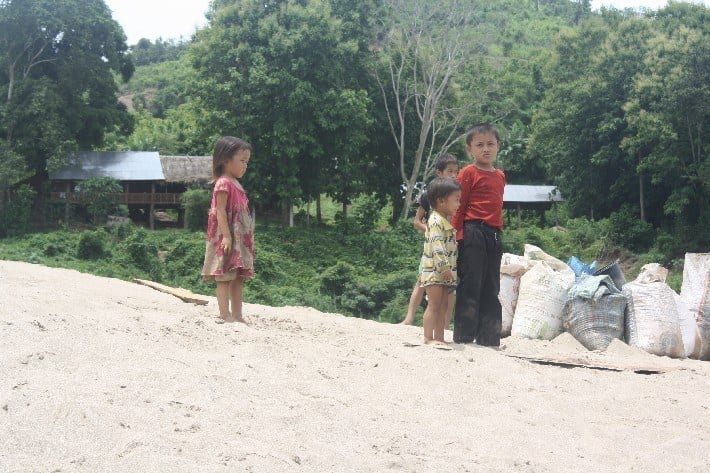 Now and again, our boat stopped to deliver crew members to their villages or care-packages to the locals. Partially-dressed kids jumped for joy at the arrival of party packs of potato chips or cans of Sprite.

Each stop set us back five or ten minutes, making the slow boat even slower. I could hear the aluminum crunch from the footfalls of the Laotian boy walking across the roof. He carried a long bamboo pole, which was necessary for pushing the boat back into deeper waters.

When the rain came, we simultaneously hit rapids. The captain, who navigated from a folding chair, cut the engine. We unrolled the tarps over the open windows and waited along the bank.

“I recently read that a Mekong slow boat sank,” my neighbor told me. “The passengers had to swim to the side and spend the night. The crew rescued the cooler and continued to sell beer to the passengers.”

With the engine off, the tipplers were even louder. I wondered how much the price of beer would skyrocket if the rain kept us sidelined.

But the rain let up and a few hours later, we arrived in Pakbeng, the only town of any size between Houyaxai, the border town, and Luang Prabang. Our boat gently collided into the parking lot of aluminum-roofed vessels. 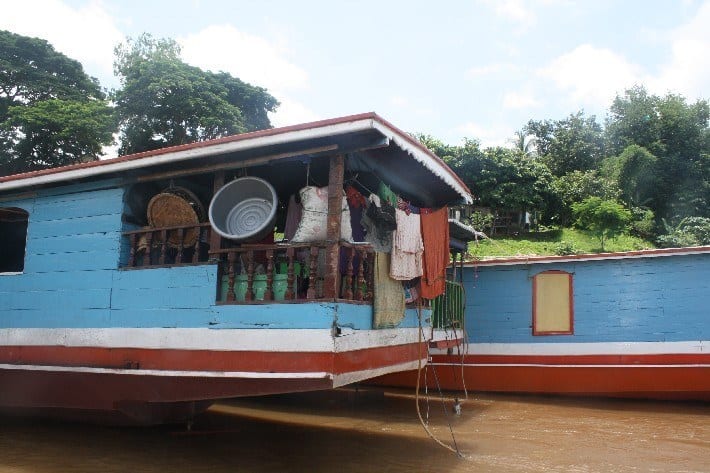 After unloading, we dodged the men and women trying to recruit us for their guesthouses and ascended the hill.

Our room was a wooden hut balancing precariously over a stream. It sat beside the road and each passing car sounded like it would crash into our mosquito-netted bed. The change from river-legs to land-legs had made my wife dizzy, so after dinner we listened to the cars race by our bed.

The next morning, the pier was a mass of confusion. Boat number 87, the one we had floated down on the previous day, was out of service.

“Two,” a pair of Laos boatmen said to us. One worker held up two fingers. The other man held up three.

“Two what?” everyone wondered.

It turned out that only two boats out of the eight docked at Pakbeng would head for Luang Prabang.

I walked to the back of one of the two boats and across a shaky plank that connected the passenger cabin to the cargo compartment. This catwalk hovered over the exposed engine. I stowed our bags next to the makeshift kitchen, where woks and bamboo baskets hung from the wall.

There was a poster of Laotian hippies, all of whom looked like the Beatles of Let It Be.

Late to arrive was the party crowd. They selected our boat first, but there were no more seats and zero floor space for them to play their drinking games. They were forced to unload and ride the ship banging against our starboard side.

On the second leg of the journey, with the revelers jettisoned, I heard only the struggling motor as we slow-boated to Luang Prabang.

Check out these helpful travel guides:

Noah Lederman writes the travel blog Somewhere Or Bust. He is completing a novel about an infant survivor of the Cambodian genocide. His travel writing has appeared in Chicago Sun-Times, The Economist’s More Intelligent Life, Gadling, and elsewhere. Follow him on Twitter or like him on Facebook.