Stepping into the school’s hall, 100 faces turn towards us, 200 eyes staring openly. Kids start to giggle, hiding their mouths behind small palms. Some point at us and then whisper unknown words to their friends. The teachers glance at us briefly, and then back at the children trying to get them to file quietly and orderly into their seats.

As the first white people to enter the school grounds, I’m not surprised by the response. 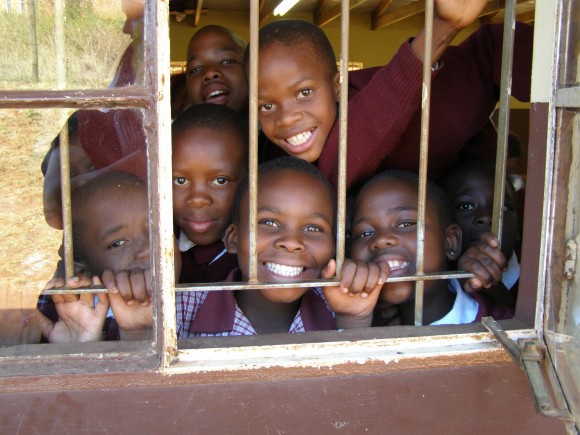 In July, I found myself in a rural area – not quite a township but very similar – of KwaZulu Natal, South Africa, volunteering with friends. Found myself not only physically, but metaphysically looking at life in a new way. It was the most incredible two weeks of my life, and, in that context, the best travel experience I’ve ever had.

My first taste of life as a volunteer in South Africa was in a small primary school in the Valley of 1000 Hills, a beautiful area full of – yep, you guessed it – hills. The primary school was in KwaNyuswa, which sits next to a wealthy white suburb. (I have to admit right now that it took me a while to refer to people as “black”, “white” or “coloured” and I’m still not comfortable with it, but it’s how people in South Africa refer to each other, and here, it’s how I can distinguish between the stark differences that still exist in post-Apartheid South Africa.)

Let me first give you some background on where I was. KwaNyuswa is an area that is characterised by high crime rates, rape, teenage pregnancy, HIV/AIDS (estimates for the area are that around 40% of the population throughout the area are infected, a statistic which is beyond comprehension), and unemployment. As you drive down the one paved road, dirt tracks spiral off like tree branches, leading to the simple huts and homes that people live in. Only black and coloured people can be seen standing along the roads, waiting, waiting, waiting, as I’ve seen so often in developing countries.

It was easy to forget all of that in this school, though, as we watch the kids put on the most energetic and talented performances I’ve ever seen, everyone dancing and singing together. The performance was put on especially for us, their special guests. I sit in the audience with the children,  but while I’m looking at the stage,  the kids around me can’t take their eyes off me.

The primary school, Empilweni, is supported by three of my Australian friends now living in South Africa. They spend hours each week – in addition to their paid and other volunteer jobs – running Connections Community Outreach Project (CCOP), a non profit that aims to link Australians wanting to help people in need in South Africa. Through the amazing work they do, they managed to raise enough funds to provide over 60 kids with school uniforms and stationery sets, and pay for some of the students’ school fees.

Over a long, exhausting day, kids, all incredibly curious about us, touching our skin, our hair, our clothes, surrounded us as we interviewed and photographed them. This information we then turned into profiles to be sent back to the wonderful people who had provided the sponsorship funds.

The next day we were in Durban, at McCord Hospital, interviewing the caregivers of young boys with HIV who lived at a Childrens’ Home. These are boys who not only have HIV, but who have been orphaned or abandoned by their families because the stigma of HIV remains so strong in South Africa. The stories of these kids were heart-wrenching, but we pushed through, diligently writing down every word to be recorded and sent back to their own sponsors in the US. Later, we met the boys to photograph them, and they were sweet and funny and flirty and cheeky, everything that a normal boy is. Each of them displaying no evidence of the huge burden that they carry; a burden most people would find impossible to deal with.

These were just some of the things that I experienced in South Africa. And I certainly didn’t do anything amazing – many people spend every day of their life in far worse situations striving to help people far less fortunate than themselves.

But for me, it was a chance to do my bit, however small. It was also a chance for me to realise how lucky I am and how I should be grateful for everything that I have. To complain about having a boring day at work? That I can’t afford the newest gadget? Even that I can’t just pack and up leave to go travel overseas right now?

Rebecca is a self-confessed travel addict. Currently stuck at a desk in the corporate world, she’s going back through her travel memories and writing about them at Rebecca and the world. You can also follow her on Twitter at @rebecca_arnold.

5 thoughts on “Seeing A Different Side of South Africa”