We couldn’t have a memorable travel moments series without talking about music. We are just as passionate about music as we are travel and sport.

We always are on the lookout for concerts that are on in any country we are living in or traveling through.

There was only about 30 people present in the small coffee shop in a suburb of Washington D.C  We discovered that Xavier was playing through his website, and Craig whisked me up to D. C for my birthday to see him in this intimate setting.

He rocked the house. It was so cool to be watching one of our Aussie faves in a coffee shop.

At the end we walked up to meet him and he gave us this massive bear hug and was so excited to be chatting with some fellow Aussies. We loved how warm and embracing he was.

We had only been living in the US for a month when we discovered that John Butler was going to be playing at a pub in Chapel Hill, North Carolina not far from Raleigh. John Butler usually plays to crowds in the tens of thousands in Oz, but in Chapel Hill there were only about 80 people present.

It was amazing to be so close to one of our music idols!

Jack Johnson, in a forest by a lake, Raleigh NC

Located among 14 acres of stately hardwoods and pines and beautifully situated next to Symphony Lake, Koka Booth Ampitheatre is one of those music venues that makes you skin tingle, especially when you have someone as incredible as Jack Johnson playing.

Sitting by the lake, in the middle of a small forest, during the summer time, with picnic blankets and bottles of wine- you couldn’t have a more memorable music moment.

What can I say except

Yes Jack. We love you.

The Rose Bowl is an iconic sporting venue, one I have always wanted to visit, and to be able to see two of the biggest bands at the one concert was amazing.

I couldn’t believe it when we found out the Chili Peppers would be supporting the Stones, and to be a part of the 100,000 strong crowd was a very memorable moment from our trip to LA way back in 1994.

Not only was it a great concert, but that very concert was also featured on an episode of the hit TV show at the time, Beverley Hills 90210 lol.

We were so excited to discover that Ben Harper was playing in LA while we were there. And we were even more excited when we arrived at the Greek Amphitheater and saw what an amazing venue it was, set in the middle of Griffith Park.

The natural bushland venue made it the perfect place to see our favourite Ben Harper. The acoustics were great and it was small enough that we could see him despite being up the back. Seeing Damien Marley as support added to the coolness factor of the concert. 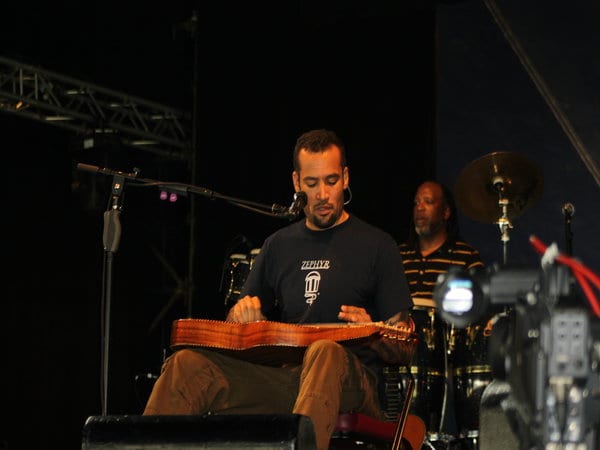 Ben Harper sang “You Look Like Gold,” just to me at the Bluesfest.

I was privileged to be present at his warm up jam session and it was definitely a highlight of my LIFE!

Craig and I scored media passes to the five day Bluesfest in April of this year. It was simply amazing, and Craig was super excited to be given access to the photography pit for some amazing up close photos.

I wasn’t ever really a major fan of Robbie Williams; I liked his music, but not really him. That was, until we saw him live at Phoenix Park in Dublin.

He was the first person after the Pope to hold a live audience at the park and with 100,000 people in attendance I think he did an amazing job.

What blew me away with Robbie was not just his entertaining performance but his wit, likeable personality and ability to connect with the crowd.

I loved how he sat on the edge of the stage, swinging his legs in glee and giggling in total joy and awe at how many people were at his concert. He was truly inspired and grateful by it.

I walked away a major fan of Robbie!

I’m not sure if I remember this concert more for the electrifying U2 performance or for the fact that it was the first time I was to meet Antone.

Lucky our friend Johan knew him and quickly introduced us. That was the beginning of a very long friendship with one crazy guy, who is U2’s number one fan even today.

Man, it’s U2 at Wembley Stadium. Really what else can I say?

What have been some of your memorable concerts from around the world? Please share in the comments below…

10 thoughts on “Memorable Travel Moments: 8 concerts around the world”